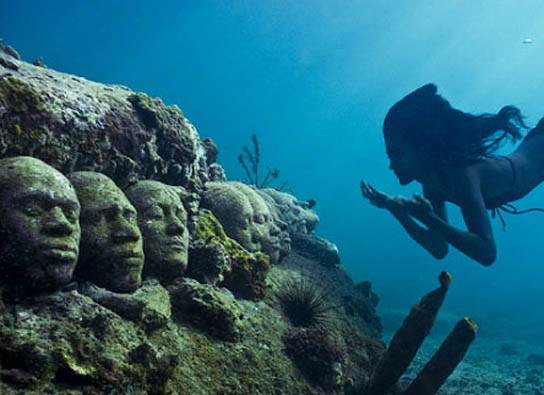 Can art help preserve nature? Let's hope so. Mexico has just announced plans to build the largest underwater museum in the world, with around 400 figures made of concrete submerged in the Caribbean sea, near Cancun. The goal? Not only to keep their tourists happy but to help protect their coral reef. In essence, the Mexican government is looking to create a new tourist attraction that will be a good alternative to their deteriorating reefs. “The underwater museum will draw many tourists, allowing us to give a rest to the natural reefs. It's like a restoration process,” national park director Jaime Gonzlez explained to this reporter. The concrete that will be used to create the scultpures will be PH neutral, which will allow the birth of algae and the proliferation of invertebrates. This will cause the sculpture areas to fill up with thousands of colorful fish. Four sculptures in human forms, made of concrete, will be submerged starting in November. Which artist will be leading the charge? Well, if you've been following this site, you'll already be familiar with his work. Jason de Caires Taylor has been named artistic director of the project. For those of you who are not familiar with Jason's work, in May 2006 he gained international recognition for creating the world's first underwater sculpture park in Grenada, West Indies. Each sculpture will be human sized, with a base of four square metres. There will be theme-based galleries as well. Stories include “The Dream Catcher,” which will be about a person who sorts bottles that arrive with messages sent by castaways, and another will be titled “Coral Collector”. The Subaquatic Sculpture Museum will be situated in the West Coast National Park in the southeastern state of Quintana Roo, on the Yucatn Peninsula. Do you think that this is a good idea? Can art really help preserve nature? Via IPS News and Treehugger