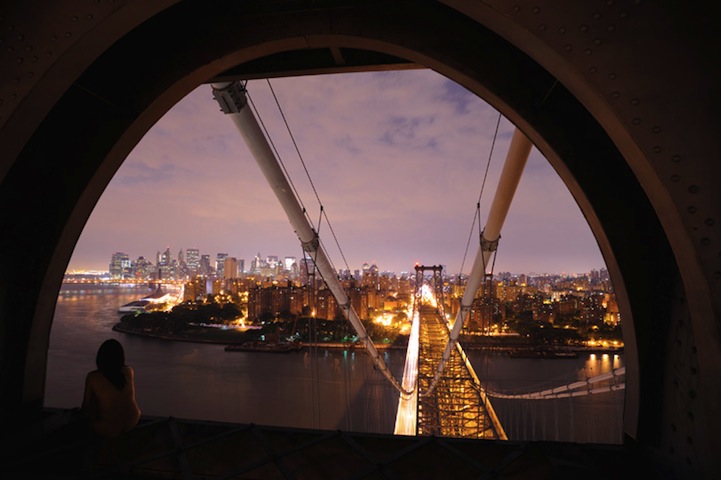 Over the last few years, I've had the pleasure of sharing many different art, design, and photography projects. Naked City Spleen by Miru Kim was one that really stood out. To this day, it remains a personal favorite.

Miru was born in Stoneham, Massachusetts in 1981, but was raised in Seoul, Korea. She moved back to Massachusetts in 1995 to attend Phillips Academy in Andover and moved to New York City in 1999 to attend Columbia University. In 2006, she received an MFA in painting from Pratt Institute.

Just recently, I had the pleasure of catching up with Miru. She was kind enough to grant us an exclusive interview, which you can view, below.

How frightened were you when you visited these dark, grungy places alone? How did you overcome the fear?

It was very frightening. I'm not sure how I overcame the fear. I never did, really. It always helps if you go with someone else. After a while you gradually get used to places that are dark and abandoned and it gets easier the more you do it. However, I still get scared every time. Since I was a child people always tell me that I'm quite timid.

Are all of your shots self-portraits? Do you ever have someone else take the shots?

They are all self-portraits. I set up the camera on a tripod, and either use self-timer or have someone press the button for me on cue.

Have you ever felt self-conscious being naked in front of a worldwide audience?

They are photos that I pick out, and I never feel that the person in the photos is myself when I go through them for editing. It's a different story if I were to be naked in front of a large live audience. Also, I try to pick out the poses that are least “sensual.” It's about a human being in her natural state roaming and inhabiting the ruins. I wanted to express the living being in the simplest way possible.
I have on the other hand felt a little strange getting naked in front of a friend accompanying me to help me with the shoot, but after a while I got used to it, and I tend to project certain professionalism while I'm on a shoot. No goofing around while naked, basically.

What type of emotions, would you say, come through the most in Naked City Spleen?

Loneliness is the first thing that comes to my mind. I was actually feeling quite blue from being alone when I started the project.

What was your ultimate goal when shooting this series?

That is an interesting question. If you're talking about a narrow sense of this specific project, I wanted a creative way to preserve the memories of the derelict man-made spaces I visited. That is why I write about my experiences too. As you can see there is a piece of writing that accompanies each photo. The writing is not meant to describe the picture, rather, an accompanying piece of work that tells the story about the location and what I felt. I never talk about the figure in the photos because I want to leave room for interpretation by the audience. In a general sense, however, the ultimate goal of creating artwork for me is to give back to our society what I felt when I looked at artworks that really inspired me. And I can understand when Francis Bacon said, “I painted to be loved.”

How did you find your locations?

Sometimes by chance, like riding by on a train, but mostly through people I know or online sources. When I have a general idea about where the structure is sometimes I would spend some time on google satellite to find the exact location. You can tell sometimes by holes on the rooftops that appear on the satellite map. This was very useful for my new project as well, locating large hog farms in the Midwest.

What's your favorite shot/location in the series?

This is hard to answer because I love going to many different places. I can tell you my least favorite and that is the sewers. I probably will never go back into the sewers. Not my cup of tea. But then again, I guess I can never say never.

Did you ever get in trouble when shooting? Could you please describe the most memorable experience?

As I explained in the TED talk, I've run into homeless men, and also some other people in these locations, like graffiti artists and explorers. I have many times dodged trouble (kind of like in an action movie, but not quite) but couple times I did run into some trouble. First time I got seen in public doing a shoot was only last year, and of course, it had to be in a Muslim country. I was very scared but thanks to my friend Ersoy Alap and his suave Turkish I didn't get arrested. The security officers must have thought that he was the photographer shooting something indecent and I was just a model. And another incident last year, I was in an abandoned factory in Toronto and the security officers caught me and questioned me, so I was honest with them, and they let me go out the way I came in, which was a hole under a fence, and they said, “you know, if we call the cops they would call your parents.” I was super psyched about being mistaken as a teenager because I'm thirty now. Yes to the Korean genes.

How would you describe your experience speaking at TED?

It was probably the scariest thing I ever did except for going into a hog farm. I have major stage fright and you might be able to tell from the video that I was extremely nervous. I had to cross my arms and my legs too because they were all shaking. My father once told me to imagine the people in the audience as rocks, but that didn't really help so I started imagining rocky mountains and mountain goats jumping up and down for some reason. That didn't really help either. It's in my nature to be extremely timid, so maybe that is why I almost get into a state of trance in a situation that challenges my fear.