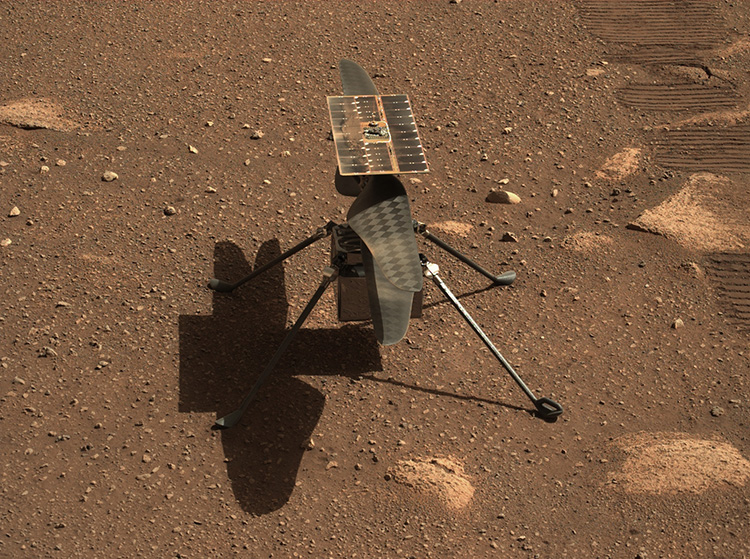 NASA’s Ingenuity Mars helicopter as photographed by the Mastcam of the Perseverance rover. (Photo: NASA/JPL-Caltech/ASU)

NASA's Mars Ingenuity helicopter is making history every week. Brought to the planet by the Perseverance Mars Rover, the tiny craft recently completed the first helicopter flight in an atmosphere other than Earth's. Ingenuity has already made five successful flights. Now, NASA has released new video with sound so that everyone can listen to Ingenuity's whirring blades themselves.

Listen closely to the video tweeted out by NASA's rover, which captured the video and audio of the helicopter's flight. This is the first time a spacecraft has recorded audio of another spacecraft on a different planet. You can hear the whirring of the helicopter drone's blades—although the noise is faint. Mars has a thinner atmosphere than Earth. This makes Ingenuity's feat extra impressive, but it also impacts how sound travels. As a result, sounds have more difficulty traveling as waves on Mars. To make it easier to hear, NASA isolated the 84-hertz frequency of the blades, which beat at 2,537 rotations per minute.

This video recorded by the Mars rover is an important tool for scientists hoping to learn more about the atmosphere on Mars. Much of Perseverance's mission is to look for signs of ancient life on the Red Planet. However, its other tasks included launching Ingenuity and even producing oxygen. Perseverance will likely not return its soil samples to Earth until around 2030; but until then, the regular video, audio, and photographic footage returned by the rover will be regularly released to the public. You can follow Perseverance's Twitter and website for updates.

Hear the sound of the whirring blades of NASA's Mars Ingenuity helicopter flying in Mars' atmosphere.

I’ve seen what the #MarsHelicopter can do – and now I’ve heard it.

🎧 Grab headphones and listen to the otherworldly hum of Ingenuity’s blades as it headed south to scout a new area on its fourth flight.