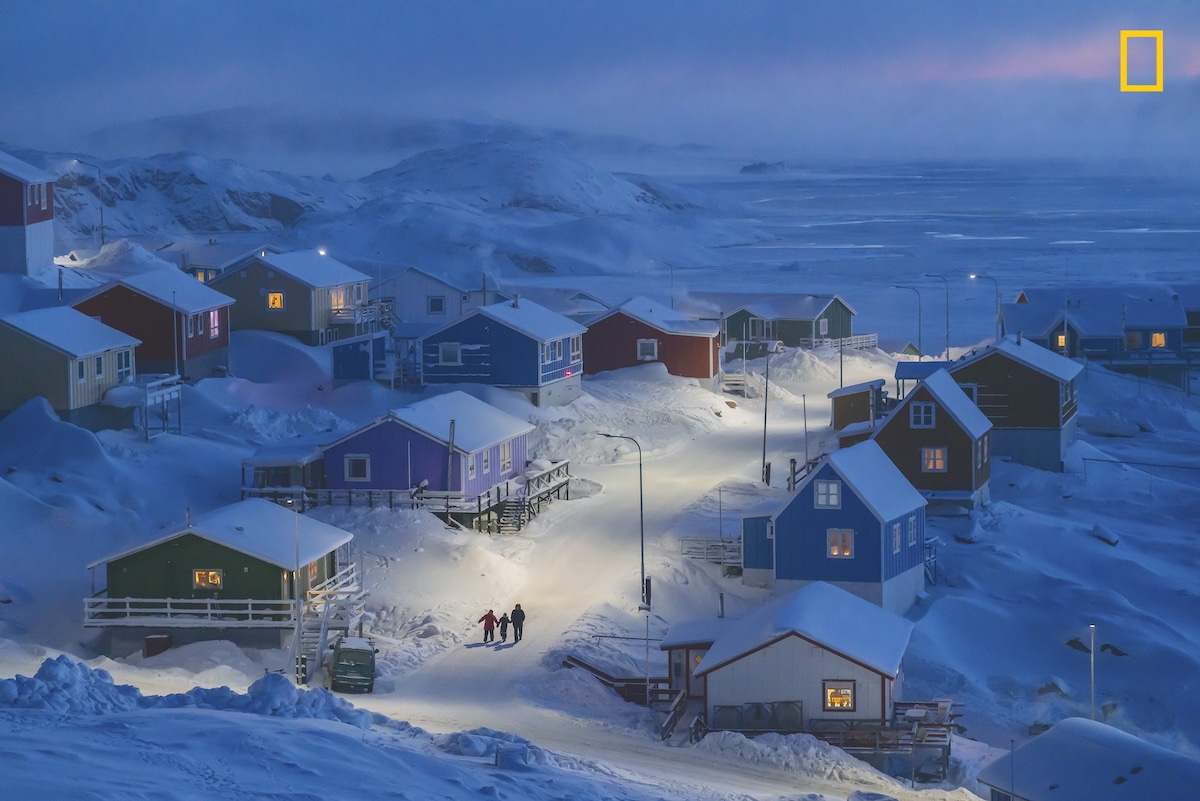 The winners of the 2019 National Geographic Travel Photo Contest has just been announced, showcasing incredible scenes of nature and human life around the world. Each spectacular photo was chosen from a pool of thousands of global entries across three categories—Nature, Cities, and People.

The grand prize of $7,500 went to Weimin Chu for his stunning Winter in Greenland image. Depicting a fishing village in Upernavik, it reveals tiny colorful homes dotted amongst the snow and fog. “It felt so harmonious. The whole land was covered by white, cold snow, and the blue tint at dusk made it even cooler. But the light from the windows, street lights and the family of three made the world warm again,” says Chu. “I love the contrast and mood of this scene. I was busy taking continuous pictures at that time, trying to capture the best moment.”

Scroll down to check out more of the winning images and check out the National Geographic website for how to enter next year’s competition.

National Geographic has just announced the winners of the 2019 Travel Photo Contest, revealing a glimpse into the incredible beauty of our world. 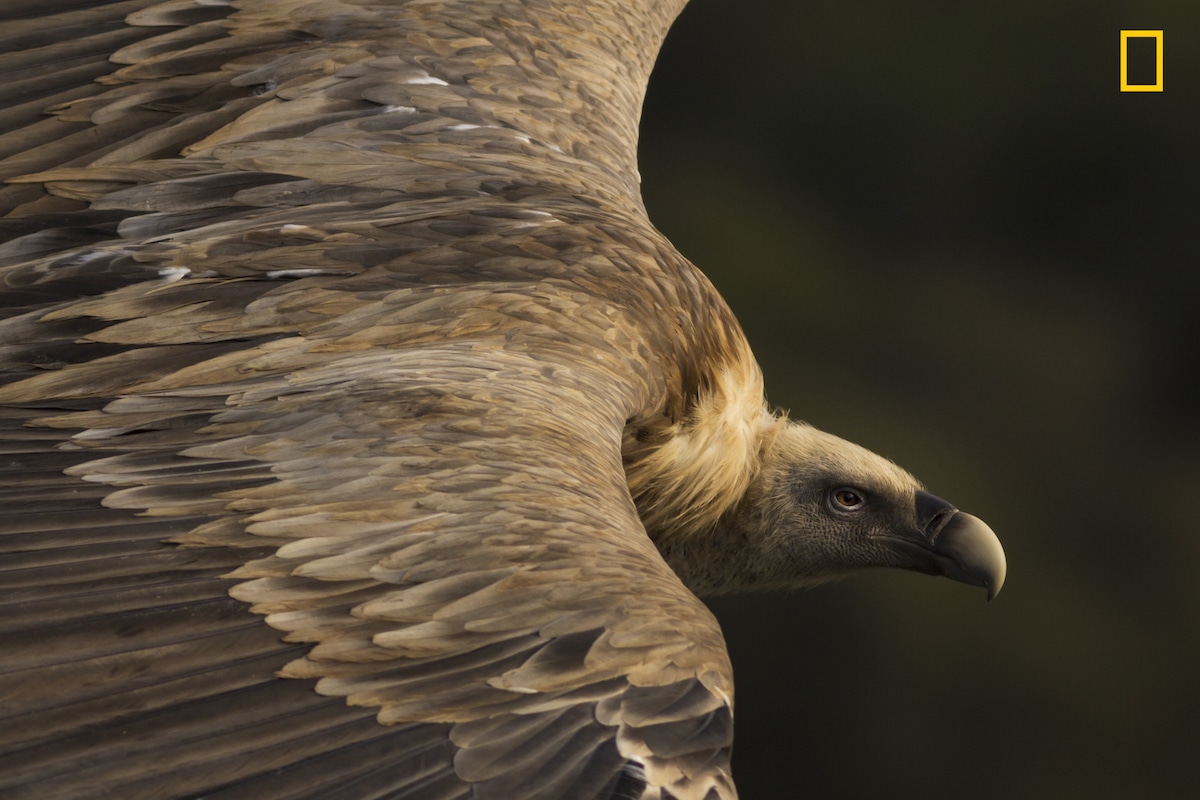 1st Place – Nature. PHOTOGRAPH BY TAMARA BLAZQUEZ HAIK/ 2019 NATIONAL GEOGRAPHIC TRAVEL PHOTO CONTEST
“TENDER EYES”
A gorgeous griffon vulture is seen soaring the skies in Monfragüe National Park in Spain. How can anyone say vultures bring bad omens when looking at such tenderness in this griffon vulture’s eyes? Vultures are important members of the environment, as they take care of recycling dead matter. Vultures are noble and majestic animals—kings of the skies. When looking at them flying, we should feel humbled and admire them. 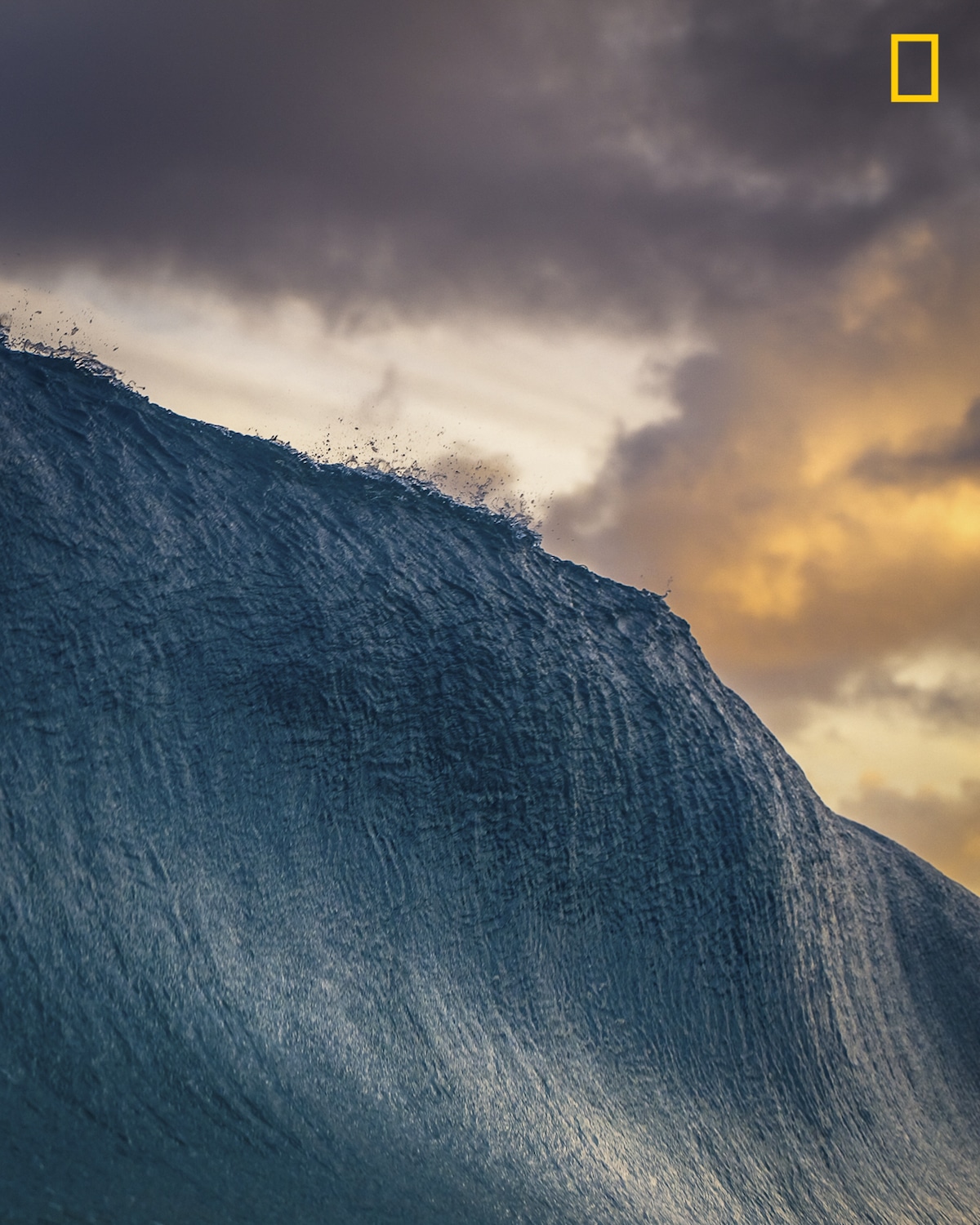 2nd Place – Nature. PHOTOGRAPH BY DANNY SEPKOWSKI/ 2019 NATIONAL GEOGRAPHIC TRAVEL PHOTO CONTEST
“DREAMCATCHER”
What happens before a wave breaks? That question has been my assignment this past year. On this particular day, I decided to shoot the sunset on the east side of Oahu, Hawaii. About 100 photographers were out in the morning, but I had the evening to myself. The textures from the trade winds [created] subtle colors from the west and blended well using my 100mm lens. I had to look into my viewfinder while this wave was breaking. Not an easy task when a wave is about to crush you. 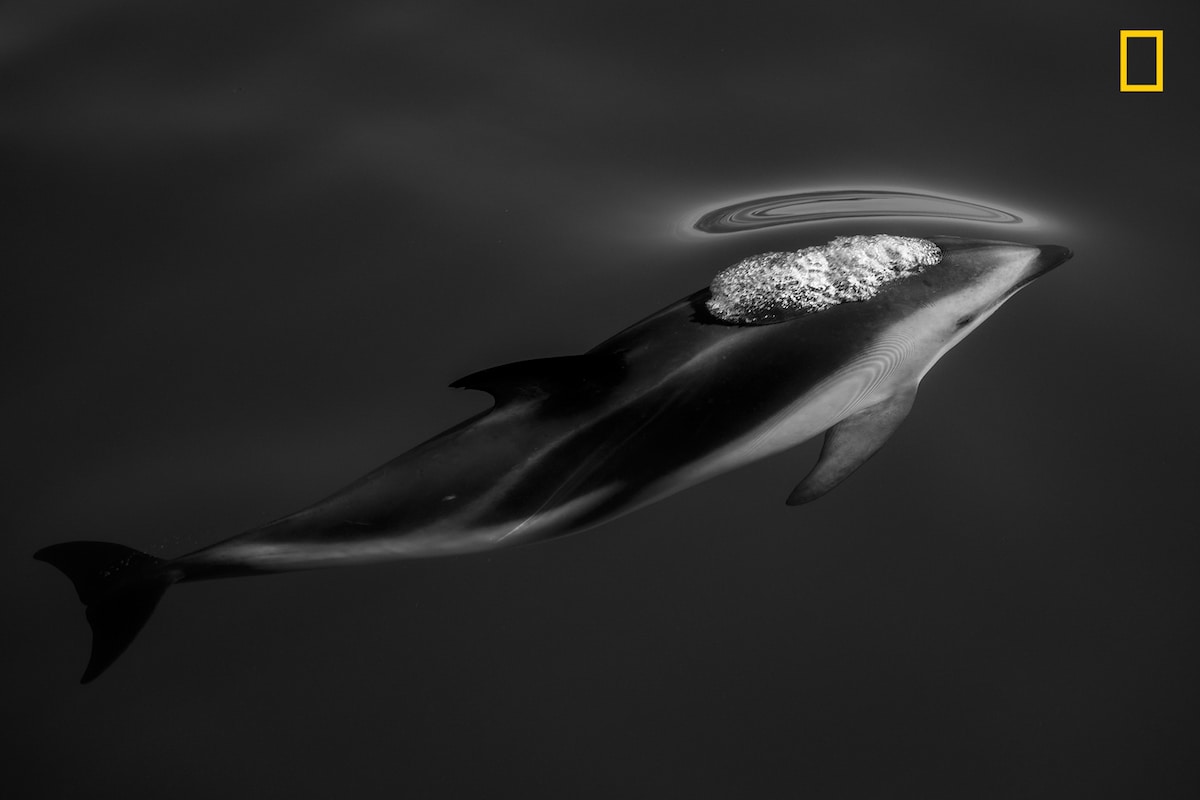 3rd Place – Nature. PHOTOGRAPH BY SCOTT PORTELLI/ 2019 NATIONAL GEOGRAPHIC TRAVEL PHOTO CONTEST
“DUSKY”
Dusky dolphins often travel together in great numbers in the deep canyons of the Kaikoura, New Zealand in search of food. They glide through the ocean effortlessly, coming up only to breathe. Dusky dolphins are fast and will often keep pace with a speeding boat. I waited on the bow of the boat as the Dusky dolphin almost broke [through the surface]. Their elegance and streamlined bodies are built for speed and maneuverability—accentuated by the smooth, clear water of the New Zealand coastline. 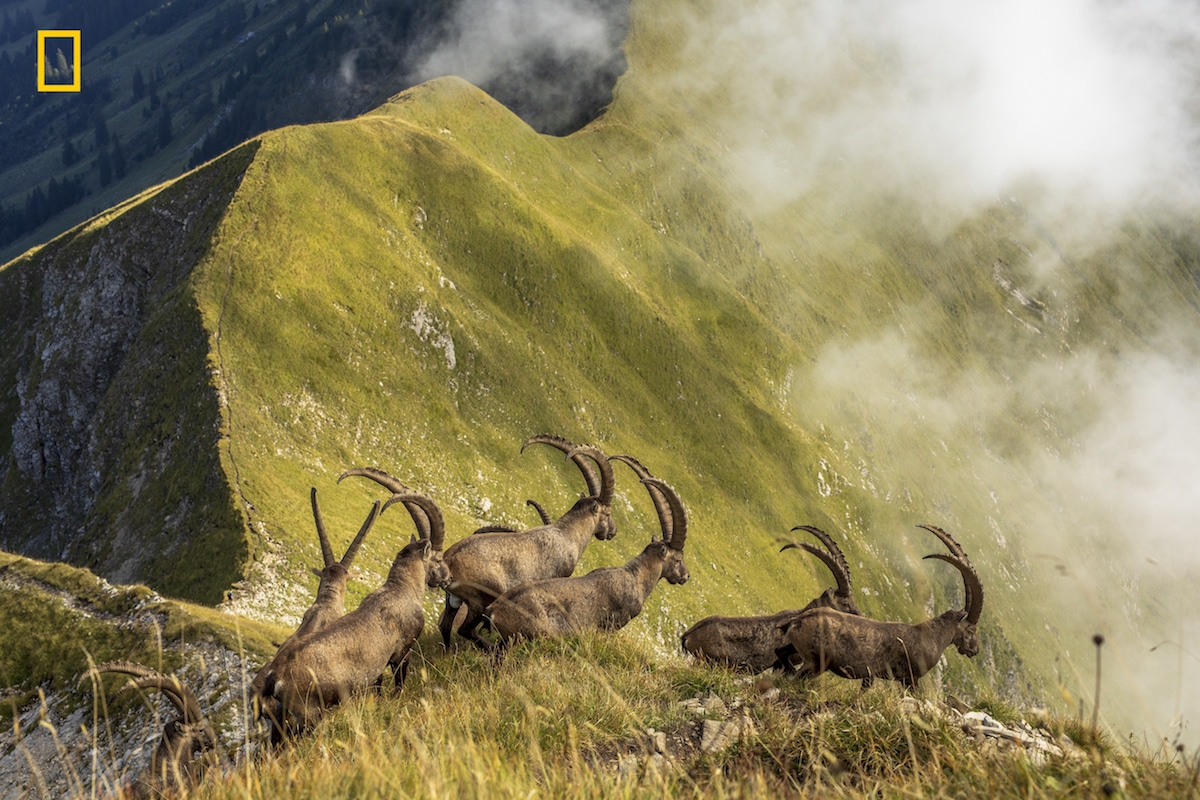 Honorable Mention – Nature. PHOTOGRAPH BY JONAS SCHÄFER/ 2019 NATIONAL GEOGRAPHIC TRAVEL PHOTO CONTEST
“KING OF THE ALPS”
A herd of ibexes in Switzerland’s Bernese Oberland cross a ridge above Lake Brienz. Their powerful and impressive horns show who the king of the Alps are. Ibexes are ideally adapted to live at dizzying heights. The continuing ridge path and the rising fog show the natural habitat of these animals. After a few hours of observing the animals, I spotted the ibex herd on one side of the ridge. Several ibexes stopped at the transition [to view the world around them. 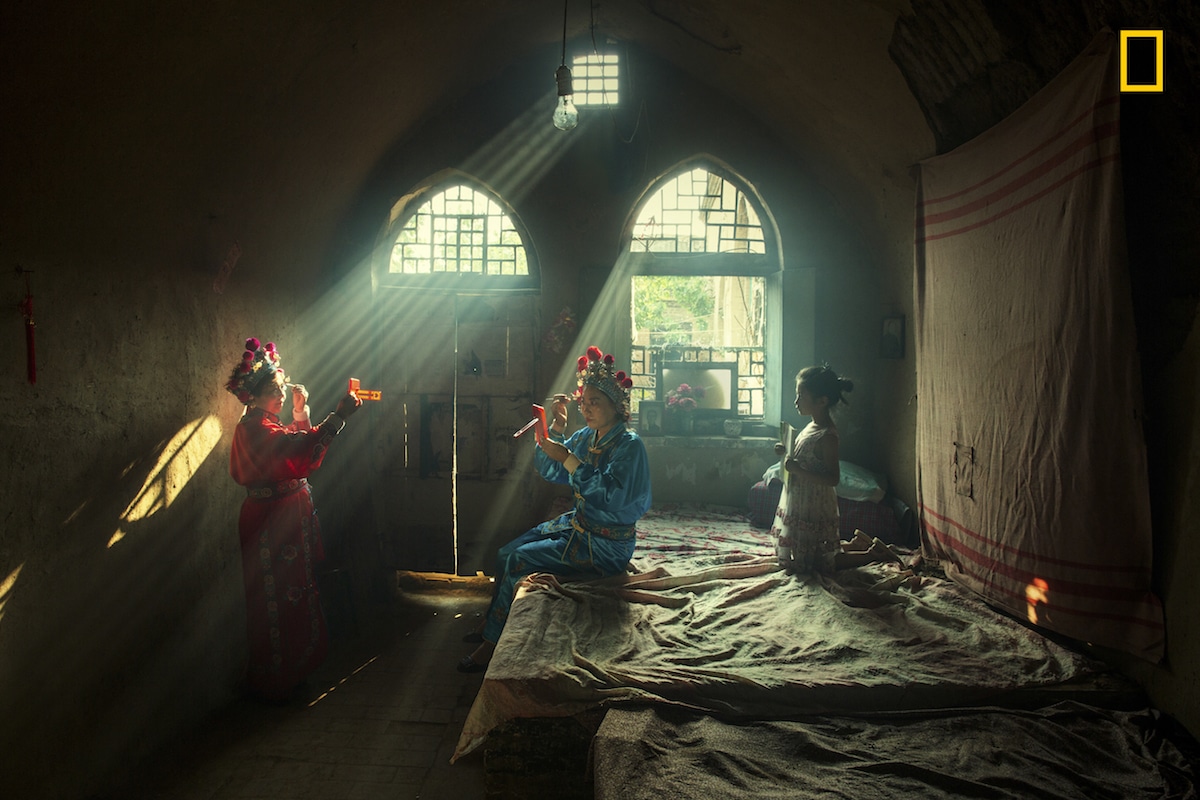 1st Place – People. PHOTOGRAPH BY HUAIFENG LI/ 2019 NATIONAL GEOGRAPHIC TRAVEL PHOTO CONTEST
“SHOWTIME”
Actors prepare for an evening opera performance in Licheng County, China. I spent the whole day with these actors from makeup to [stage]. I’m a freelance photographer, and the series “Cave Life” is a long-term project of mine. In China’s Loess Plateau, local residents dig holes in the loess layer [to create cave living spaces, known as yaodongs] and use the heat preservation properties to survive cold winters. This series mainly records the life, entertainment, belief, labor, and other [daily] scenes of the people living in the caves. 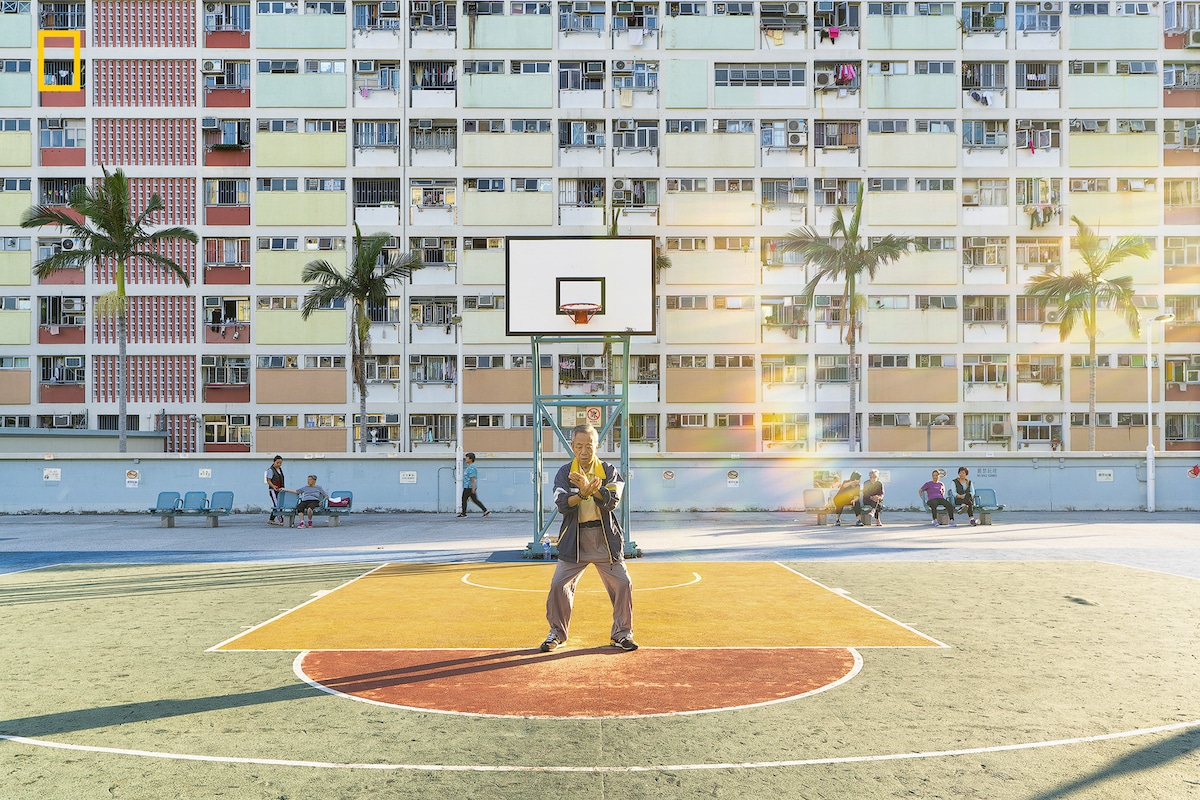 2nd Place – People. PHOTOGRAPH BY YOSHIKI FUJIWARA/ 2019 NATIONAL GEOGRAPHIC TRAVEL PHOTO CONTEST
“DAILY ROUTINE”
This photo was taken at a public park at Choi Hung House in Hong Kong. When I visited during the afternoon, it was very crowded with many young people taking pictures and playing basketball. But when I visited at sunrise, it was quiet and a different place. [The area] is [designated] for neighborhood residents in the early morning, and there was a sacred atmosphere. I felt divinity when I saw an old man doing tai chi in the sun. 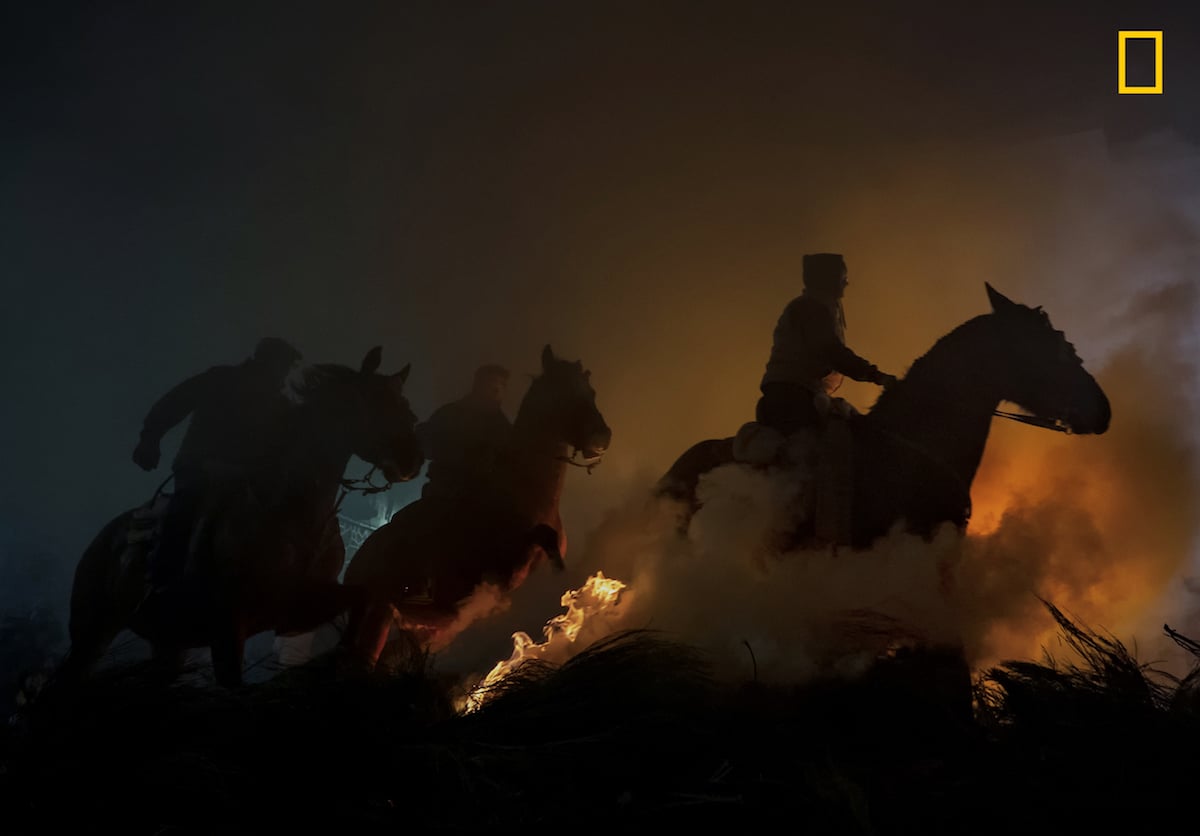 3rd Place – People. PHOTOGRAPH BY JOSÉ ANTONIO ZAMORA/ 2019 NATIONAL GEOGRAPHIC TRAVEL PHOTO CONTEST
“HORSES”
Every year on the feast of Saint Anthony the ceremony of the purification of animals, called Las Luminarias, is celebrated in Spain. In the province of Avila, horses and horsemen jump over bonfires in the ritual that has been maintained since the 18th century. The animals [are not hurt], and it is a ritual that is repeated every year. To make the photo, I moved from Seville to San Bartolomé de Pinares because I am very interested in photographing ancestral rites. 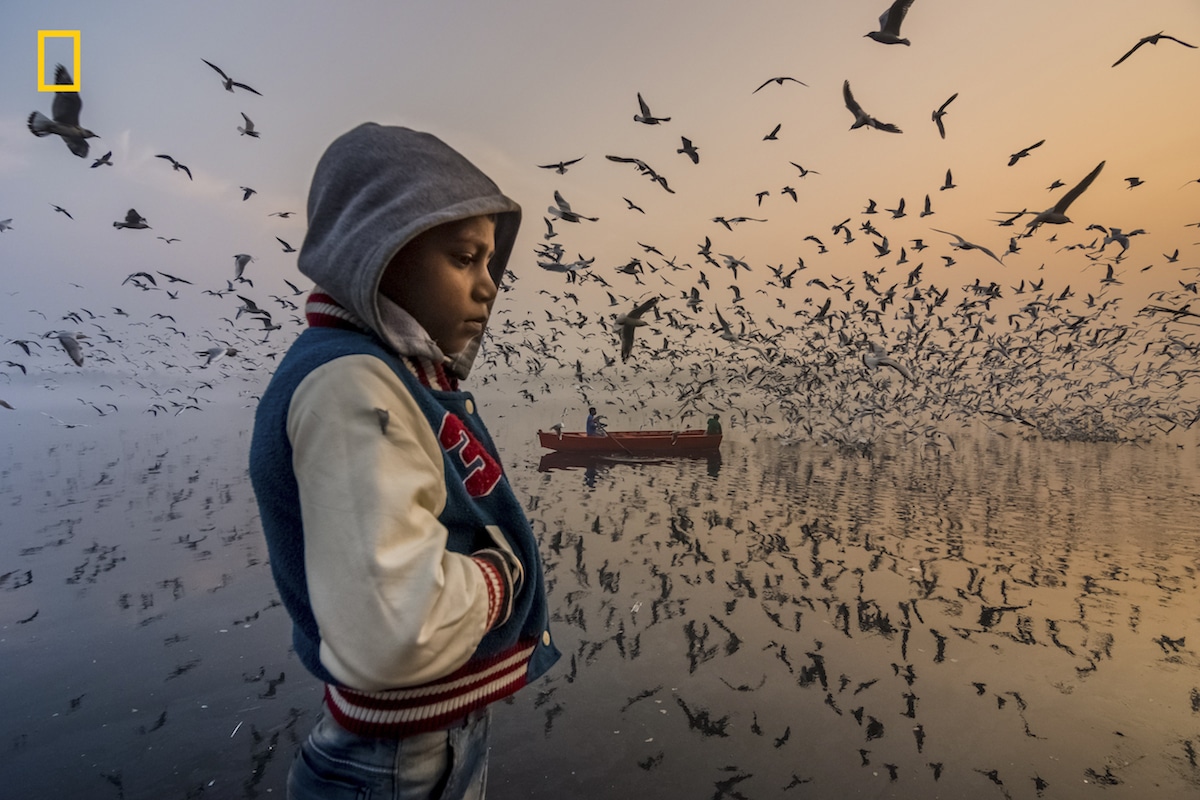 Honorable Mention – People. PHOTOGRAPH BY NAVIN VATSA/ 2019 NATIONAL GEOGRAPHIC TRAVEL PHOTO CONTEST
“MOOD”
I captured this layered moment during sunrise along the banks of the Yamuna River in Delhi, India. This boy was thinking silently, and visitors were enjoying the loud musical chirping of thousands of seagulls. The early morning golden light from the east mixed with the western blue light, creating a [ethereal atmosphere]. I am a regular visitor [here] and have photographed this place for the past three years. Now, many national and international photographers have begun visiting [too]. 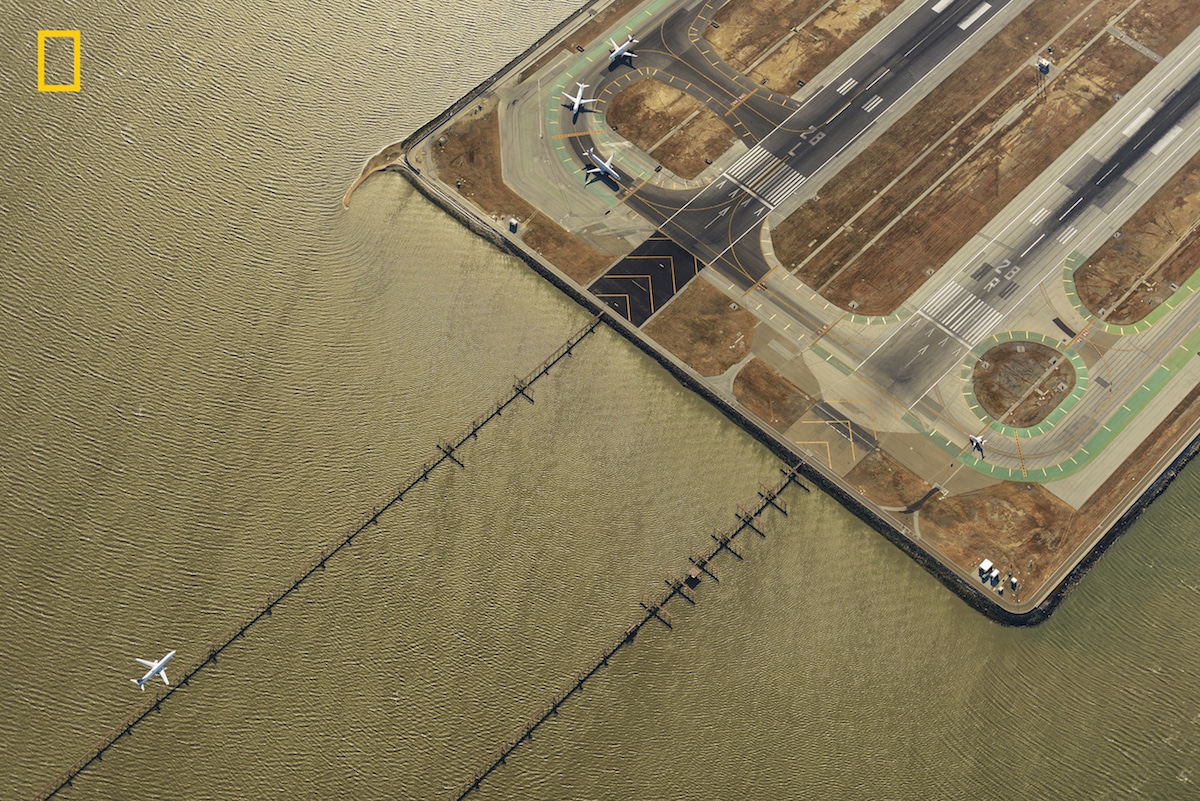 2nd Place – Cities. PHOTOGRAPH BY JASSEN TODOROV/ 2019 NATIONAL GEOGRAPHIC TRAVEL PHOTO CONTEST
“IN THE AGE OF AVIATION”
There are four runways at San Francisco’s International Airport (SFO). This is a rare look at the approach end of runways 28 left and right. I had dreams of documenting the motion at SFO and [arranged] permission to fly directly overhead. What a windy day it was. Winds atSFO were 35-45 miles per hour, which meant a bumpy flight, and itwas much harder to control the plane while photographing. The flight was challenging, but it was also so thrilling that I couldn’t sleep for several days afterward. 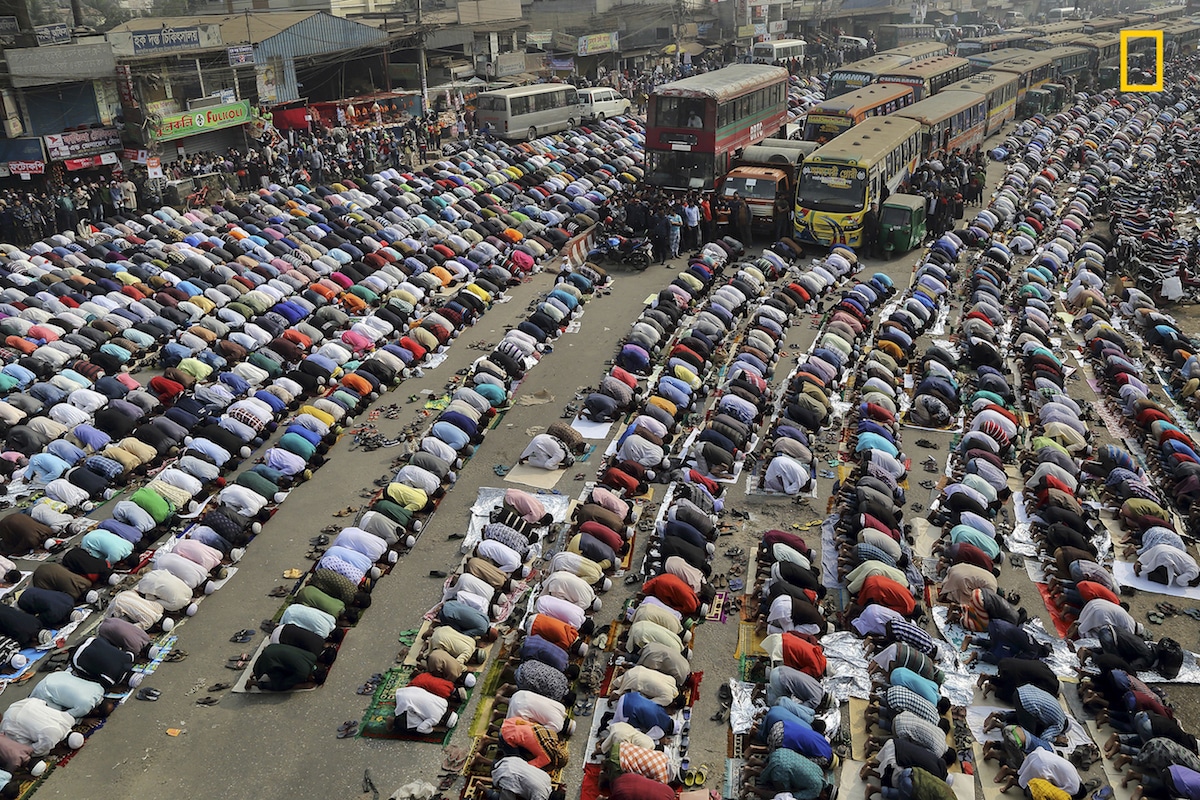 3rd Place – Cities. PHOTOGRAPH BY SANDIPANI CHATTOPADHYAY/ 2019 NATIONAL GEOGRAPHIC TRAVEL PHOTO CONTEST
“STREETS OF DHAKA”
People pray on the street in Dhaka, Bangladesh during Ijtema. Bishwa Ijtemais one of the major Islamic religious gatherings which is [observed] annually in Dhaka and millions of Muslims visit [during this time]. Dedicated prayer grounds are not [large] enough to handle this huge number of people, so large numbers of people come to [Tongi], the main street of Dhaka. All the ground transportation and [pedestrian crossings] are suspended during that time. 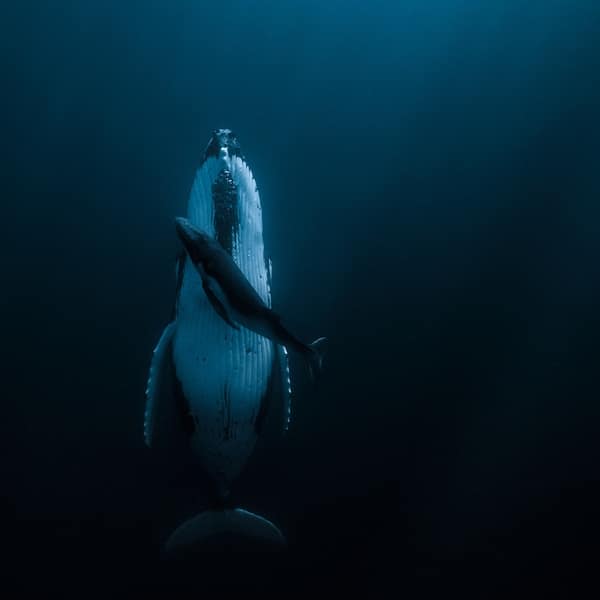 This Incredible Underwater Photo of a Mother Whale and Her Child Wins $120,000 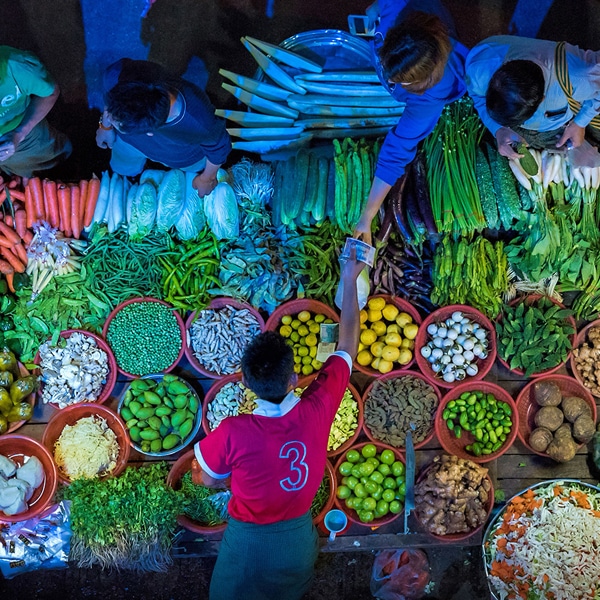