Military Dogs Save Lives and Bravely Lead the Way to War 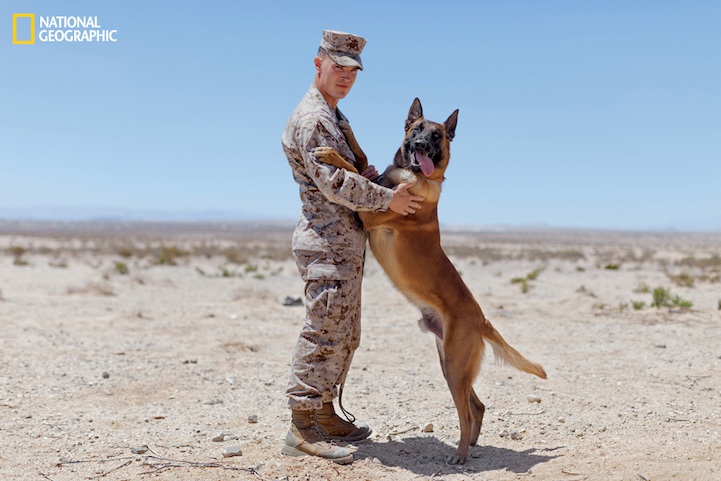 While dogs have always been a popular subject to write about, because of their warmth and gentleness, they're not often regarded as the bravest of animals. Then again, not many dogs can be combat canines, leading the way to war. In National Geographic magazine's June issue, the cover story is called Hero Dogs, A Soldier's Best Friend. Layka, the proud dog featured on the cover, was recently recognized by an Air Force unit for her heroics in Afghanistan. The 3-year-old Belgian Malinois was dispatched to inspect a building for explosives and search for enemy combatants. She was ambushed, receiving several gunshot wounds to the abdomen and right front leg. Despite being gravely wounded, she protected the lives of her team by attacking and subduing the assailant. Though she did not pass away, her injuries were so severe, that doctors had to amputate one of her legs.

“What these dogs do, day in and day out, is phenomenal. They do save lives. Layka was shot and still attacked the person shooting her. She's been through a lot, and what she did is nothing less than heroic,” stated Maj. Jason Harris, 341st TRS commander who presented Lyka with a medal of heroism.

You can read more inspiring stories of war dogs at National Geographic. Here are a few excerpts:

“At the height of the wars in Afghanistan and Iraq, the U.S. military had a force of roughly 2,500 military working dogs (MWDs). Some have entered our national lexicon as heroes in their own right…”

“This age-old bond between man and dog is the essence of our fascination with these teams: The human reliance on superior animal senses–dogs are up to 100,000 times more alert to smells than humans are. The seriousness of the serviceman's endeavor, in contrast to the dog's heedless joy at being on the hunt or at play. The selflessness and loyalty of handler and dog in putting themselves in harm's way–one wittingly and one unwittingly–to save lives.”

Above: Marine Cpl. John Dolezal poses with Cchaz, a Belgian Malinois, at Twentynine Palms in California. Dogs bred at Lackland Air Force Base in Texas, the military's primary canine facility, are given names that begin with a double letter. 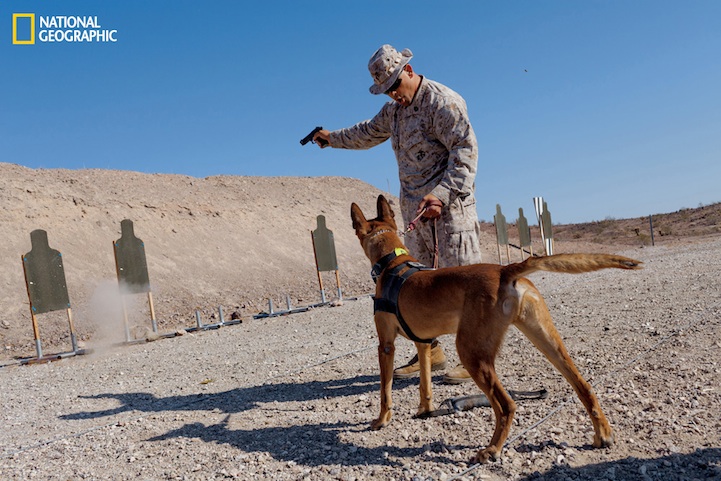 Marine Gunnery Sgt. Kristopher Knight conditions Ronnie to the sound of gunfire at Yuma Proving Ground in Arizona, so that the dog will learn to remain calm during firefight. Some trainers don turbans, play calls to prayer, and bring in farm animals to prepare dogs for the sights, sounds, and smells of Afghanistan. 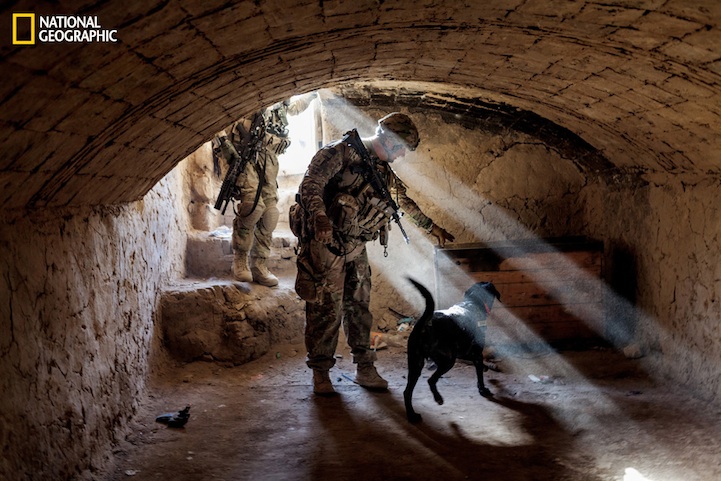 Sergeant Cartwright has Isaac sniff for weapons and explosives in a basement in Kandahar. A dog is trained to sit or lie down and not bark when it locates a target scent. The handler rewards the dog by letting it chew on its toy. 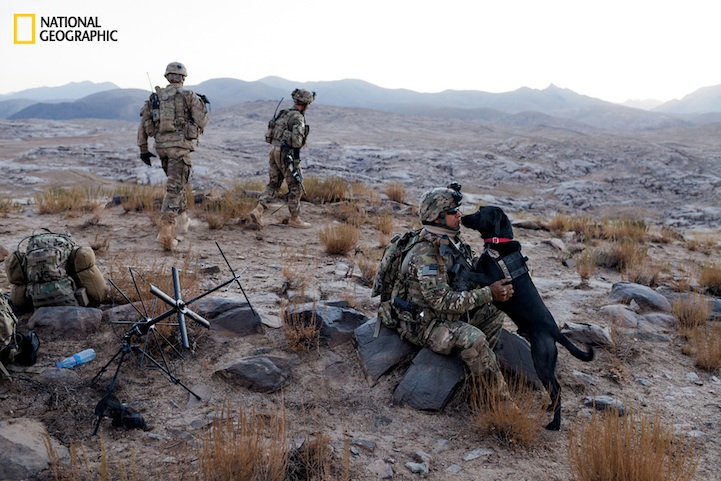 Army Staff Sgt. Jason Cartwright bonds with his Labrador retriever, Isaac, during a mission to disrupt a Taliban supply route. Dogs are very sensitive to their handlers' emotions. Says Jay Crafter, a trainer for the military, “If you're having a bad day, your dogis going to have a bad day.” 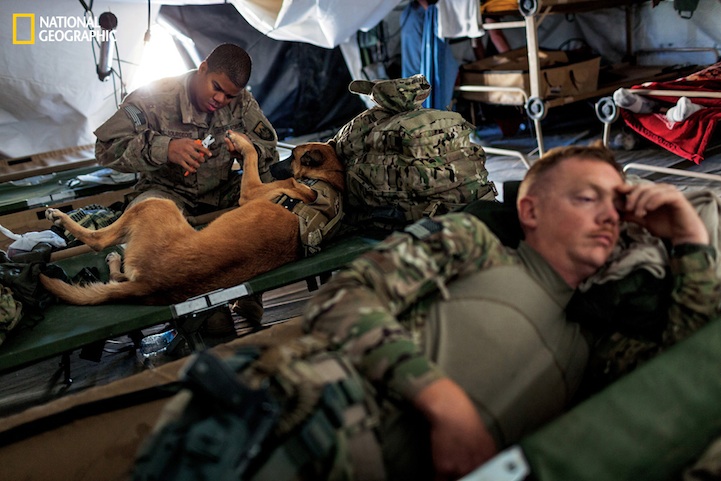 Sergeant Bourgeois clips Oopey's toenails before a mission in Afghanistan. Handlers care for their dogs' every need, learning canine CPR as well as how to spot canine post-traumatic stress disorder, which afflicts some 5 percent of deployed dogs. 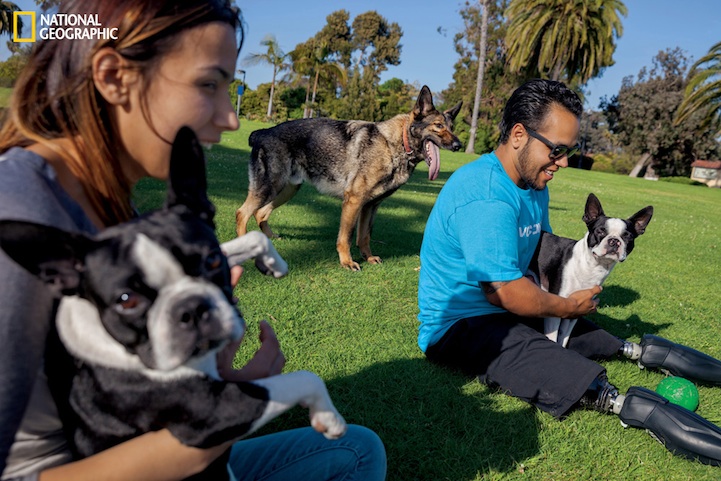 Eliana and Jose Armenta relax with their Boston terriers, Oreo and Sassy, and their German shepherd, Zenit. A retired Marine dog handler, Jose lost his legs in an IED blast while on patrol with Zenit. In 2012 he adopted Zenit. “Dogs complete our family,” he says, a family soon to include a baby. 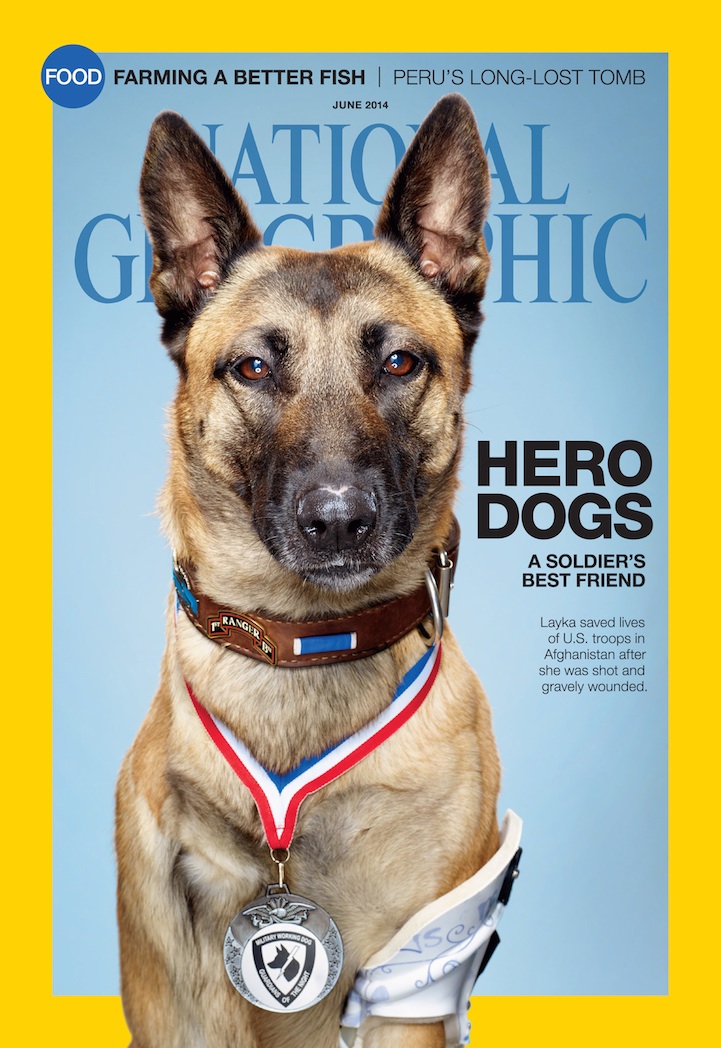