Pic of the Day: Slacklining in Front of the Moon 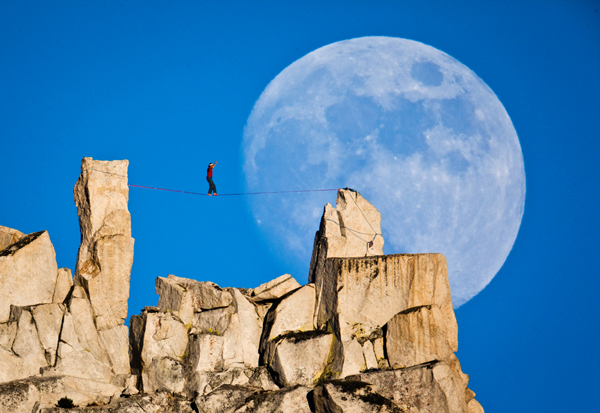 Slacklining has exploded to becoming a worldwide trend especially with the recent Super Bowl half-time show where Andy Lewis, wearing a toga, performed about 30 seconds of crazy stunts on a 2-inch wide rope. Slacklining is similar to tightrope walking in that the walkers have to balance themselves on a narrow length of rope, but instead of being pulled taunt like a tightrope, slacklining uses more flexible rope so that the walker can jump or perform stunts.

Though the extreme sport isn't new (according to Gibbon Slackline, the activity began in the mid-1970s when climbers at Yosemite National Park would rig lines to walk across), it's seeing a healthy resurgence. Here's one of our recent posts where photographer Fabrice Wittner captures some of these death defying moments.

That being said, today's Pic of the Day is also National Geographic's Extreme Photo of the Week. It shows daredevil Dean Potter at Cathedral Peak, in Yosemite National Park, at an elevation of 10,911 feet, and it's shot by photographer Mikey Schaefer.

“Hands down this was the most complicated photo I've ever taken,” said Schaefer. “It started a year earlier with Dean [Potter] seeing the moon rise over Cathedral Peak and noticing that it would make a great shot.” Schaefer even used an app called The Photographer's Ephemeris to locate where the moon would rise from a relative location. “I went out the night before the shoot with a GPS and lined everything up. Sure enough, the moon rose exactly where I thought it would,” said Schaefer.

With a background like that, it's quite the incredible shot.