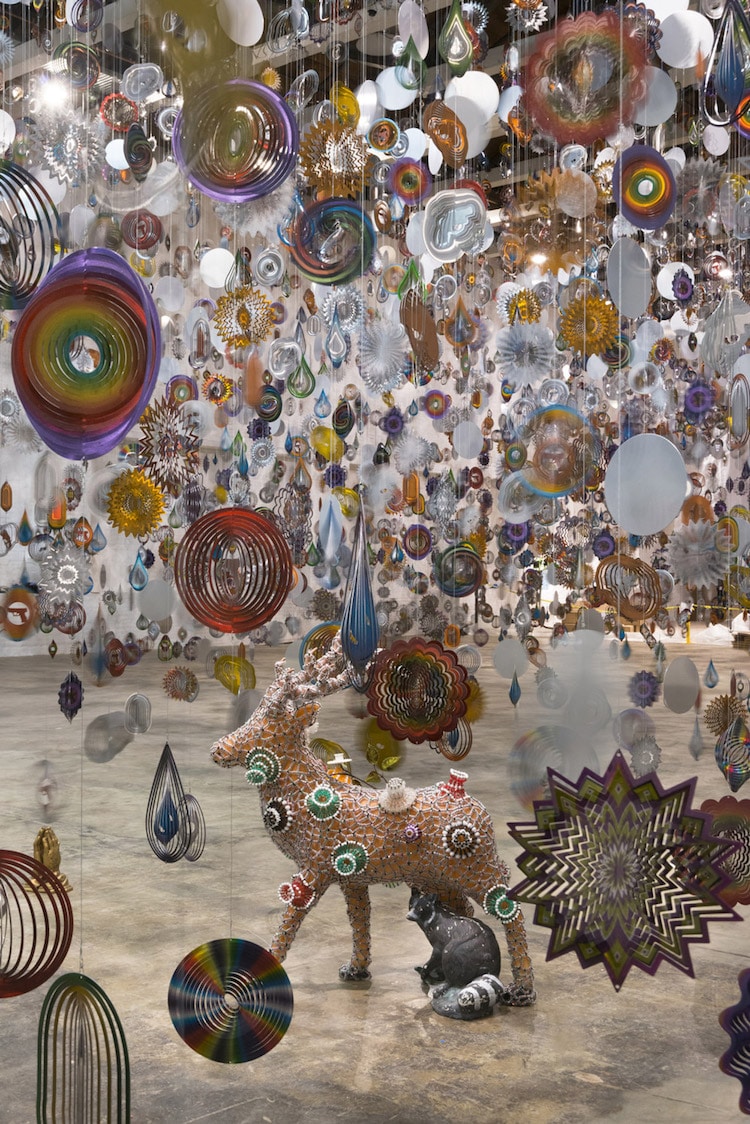 Artist Nick Cave has created a sparkling, shimmering display of yard decorations for his newest installation called Until. Its sheer volume is awe-inspiring; the bi-level work comprises 16,000 wind spinners, millions of plastic beads, 10 miles of crystals, and 24 chandeliers, among a myriad of other things. Unsurprisingly, the lawn ornament art is Cave’s largest work to date —he’s known for his considerably smaller Soundsuits—and the glittering objects fill the football field-sized space at MASS MoCA in North Adams, Massachusetts.

Walking into Until, visitors are immediately greeted by a dense cloud of crystals that surround the grand collection of elegant chandeliers. Suspended over a story high, the illuminated formation doubles as a ground for a collection of lawn ornaments that rest on top. Large yellow ladders lead the way to the crowded platform that holds ceramic birds, gilded pigs, a crocodile, and cast-iron lawn jockeys. Like the cloud itself, this astounding gathering is dense and begs a long look at the seemingly countless number of found objects—a task undertaken by a team at MASS MoCA, who searched eBay, thrift stores, and second-hand shops for them. 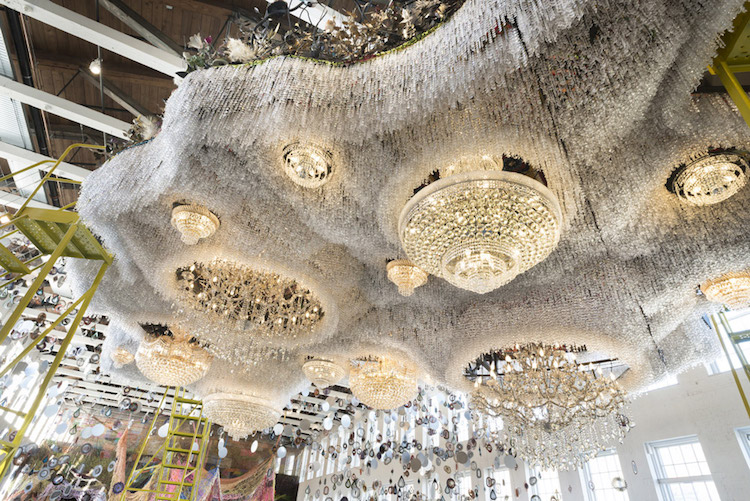 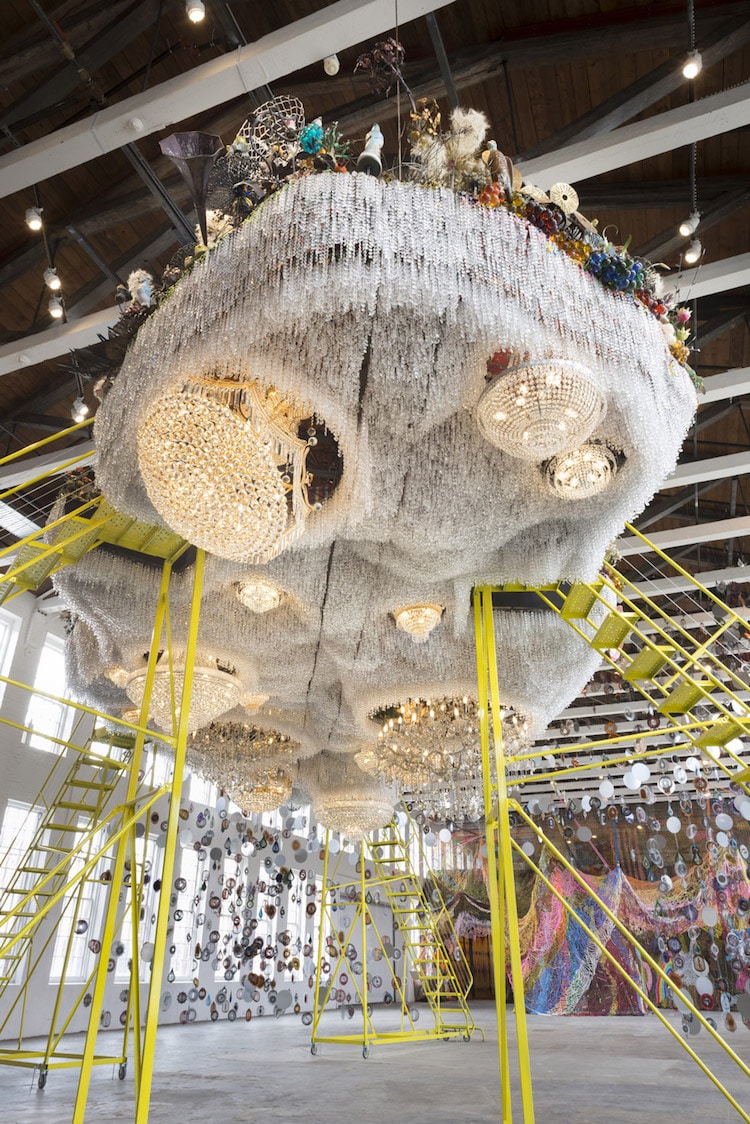 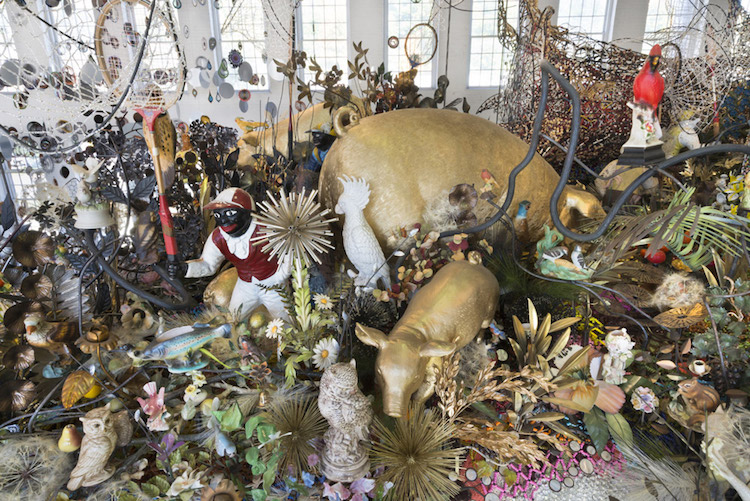 Beyond the glittering objects, however, is a comment on social issues in the United States—namely gun control and race relations.

Despite the dazzle, Until is a response to dire issues in the United States, namely gun control, gun violence, race relations, and gender politics. The name of the show is, itself, a play on two phrases: “innocent until proven guilty” and “guilty until proven innocent.” The former is how the justice system is supposed to work, while the latter is more commonly in practice. Everyone, no matter their social status, is affected by these issues. It’s easy to get caught up in our own lives and not consider others.

That’s (partially) where the metallic wind spinners come in. Amid the dangling, mesmerizing arrangement, people can see themselves reflected among others. “Formally their [the metallic wind spinners’] reflective quality was important,” Cave explained to Colossal. “To have something that we can see ourselves within as well as something that becomes almost mirage-like. Conceptually, garden spinners are found in our own back yards, so using these everyday objects with images of guns, teardrops and bullets conveys the proliferation of this violence in and around the safety of our homes.” 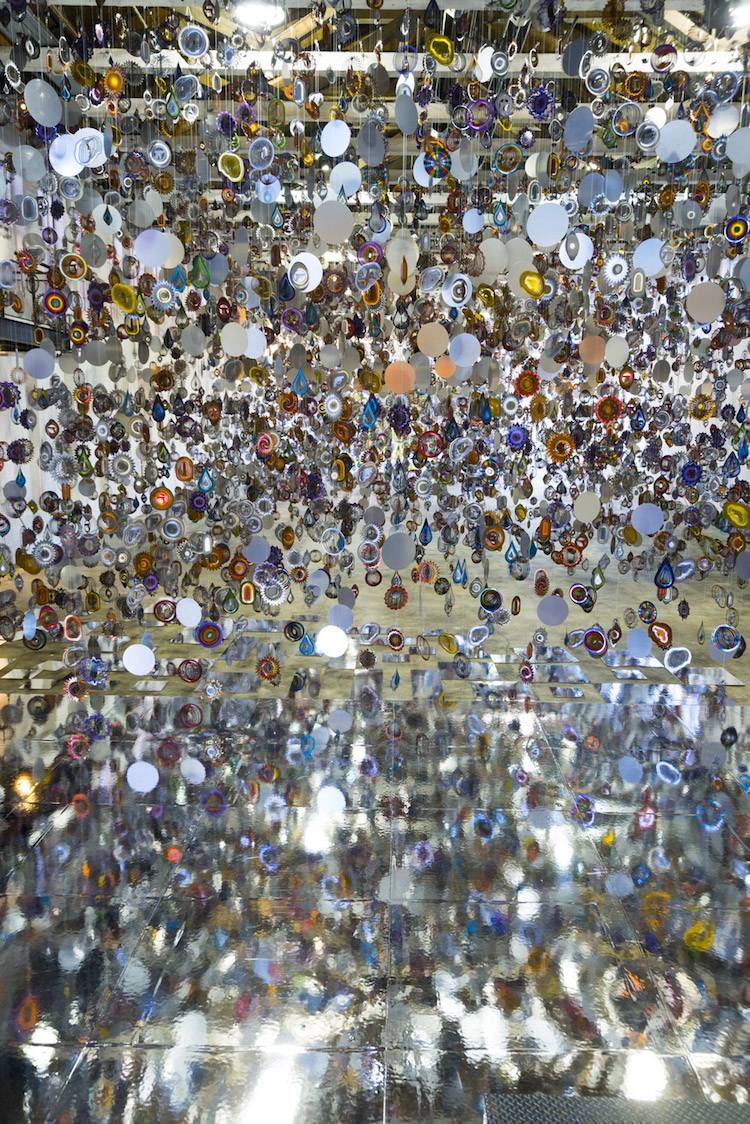 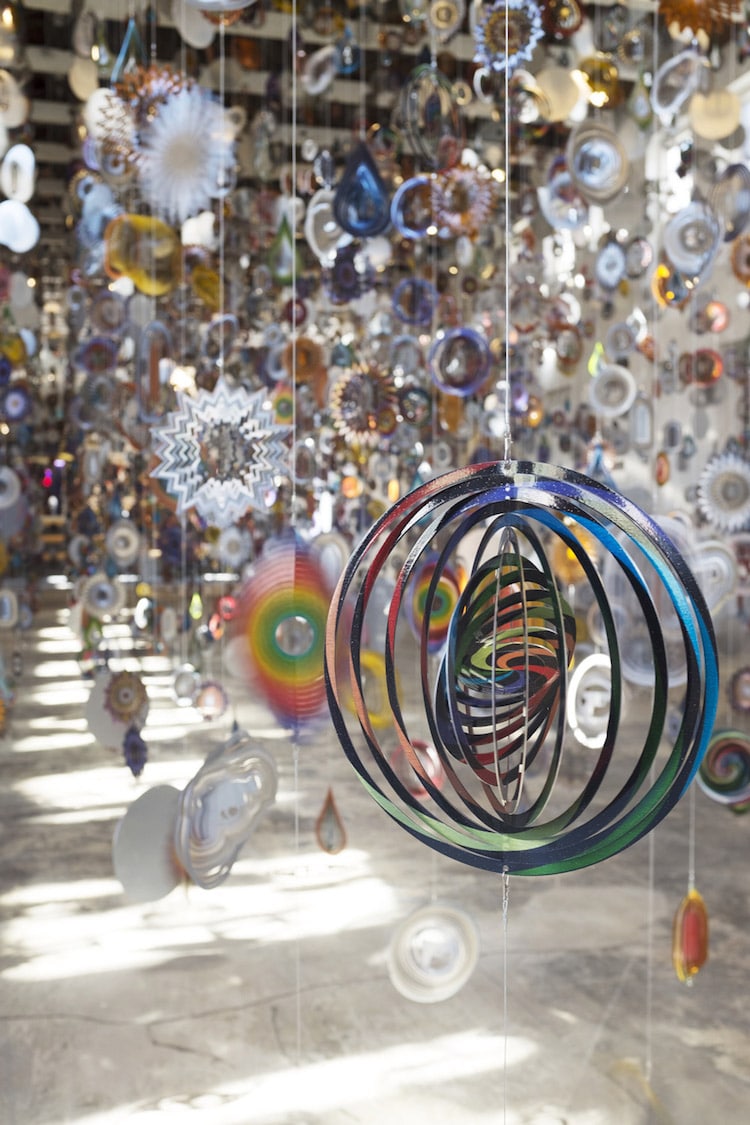 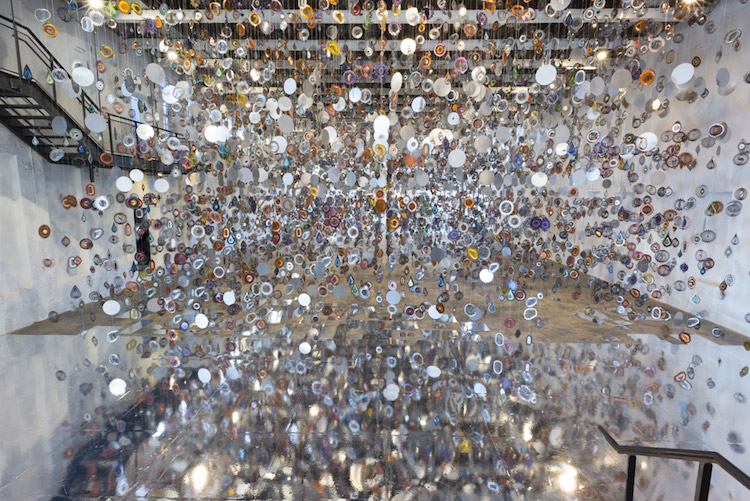 Cave sees Until as a place for healing and discussion.

Cave’s hope for Until is that it will facilitate discussion of these important issues and be a place of healing. “I view this work as an elaborate community forum, as much as a work of sculpture,” he says. In addition to the art, the gallery will host dancers, singer-songwriters, poets, panel discussions, community forums, and more in the space. 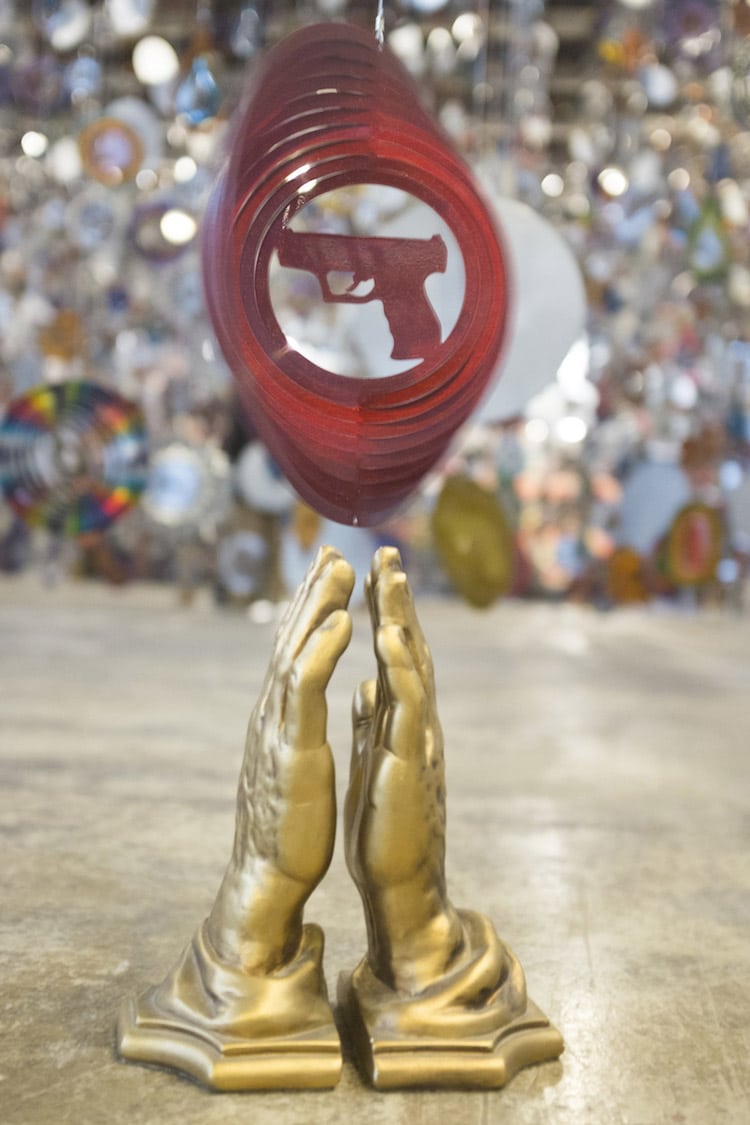 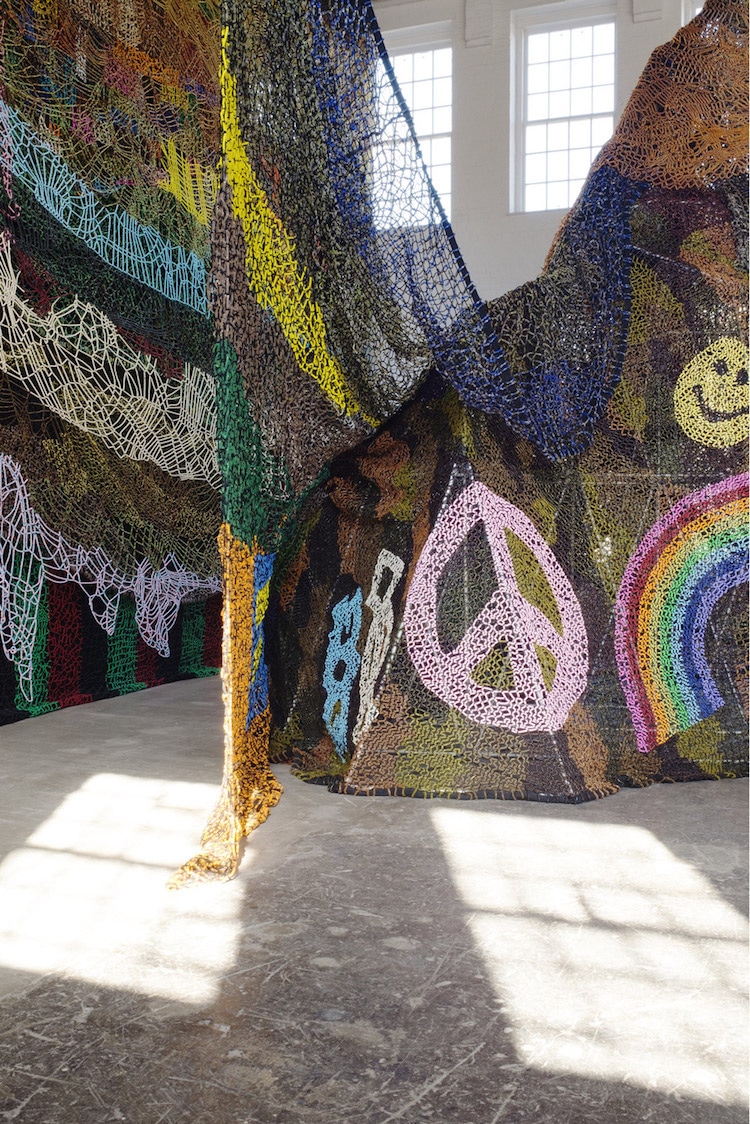 Until is on view through August 2017. There will also be a book about the show, which is to be released on May 25, 2017. It’s now available for pre-order through Amazon.

All images via of MASS MoCA and Nick Cave.