Painting of the Day: Hidden Crush 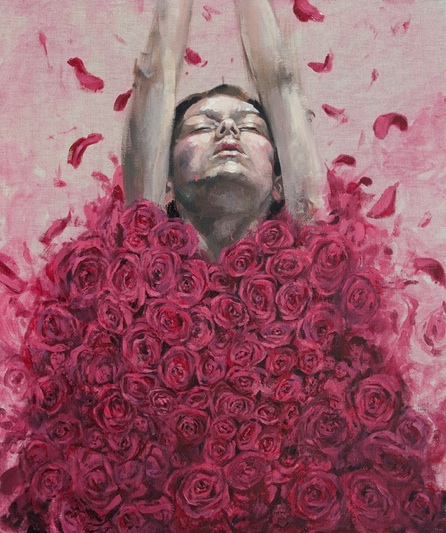 This beautiful painting, with hidden characters and meaning, is by France-based visual artist Rossina Bossio. “The inspiration for this painting comes from Colonial Latin-American portraits of dead nuns (“The Brides of Christ”),” she tells us. “This kind of portrait was very common at the time and was considered extremely special. Death was the most important moment for a nun: it was the day she ascended to heaven and became the bride of Christ, so the painter would depict the nun on her deathbed, very nicely dressed, with lots of flowers around her. “The woman in my painting comes out from a mountain of roses, which is a sweet idea, but if you look closer you'll see there are hidden characters in the roses. These characters subvert the “sweetness” of the roses and give the idea that this woman is not only rising but also “crushing” them, highlighting the erotic component of her ascension. In that sense, the woman of Crush is the antithesis of the passive and powerless female figure that is often associated with nuns.” Rossina Bossio