The Secret of How Emperor Penguins Launch Out of Water 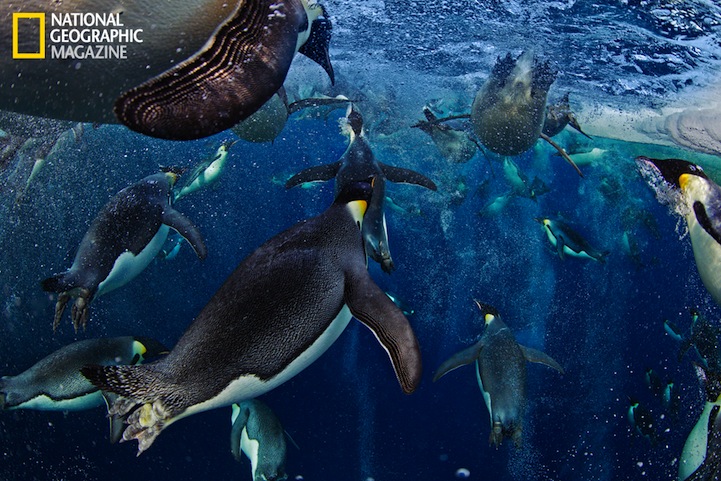 Yesterday, thanks to photographer David C. Schultz, we got a rare glimpse inside the world of Antarctica's emperor penguins. As a wonderful follow-up, our kind partners over at National Geographic just sent us these amazing photos, taken by photographer Paul Nicklen, that show penguins propelling themselves like rockets out of the sea.

Nobody quite understood how this phenomenon happened until just late last year. Emperor penguins can fluff their feathers and release tiny microbubbles that form a lubricating coat on the outside of their bodies. According to National Geographic, “When an emperor penguin swims through the water, it is slowed by the friction between its body and the water, keeping its maximum speed somewhere between four and nine feet a second. But in short bursts the penguin can double or even triple its speed by releasing air from its feathers in the form of tiny bubbles. These reduce the density and viscosity of the water around the penguin's body, cutting drag and enabling the bird to reach speeds that would otherwise be impossible.”

This secret was revealed in the November 2012 issue of National Geographic magazine. Make sure to watch the video, below, to see the penguins and photographer in action.

Above: “These penguins have probably never seen a human in the water,” says photographer Paul Nicklen, “but it took them only seconds to realize that I posed no danger. They relaxed and allowed me to share their hole in the sea ice.”
Photo credit: Paul Nicklen/National Geographic 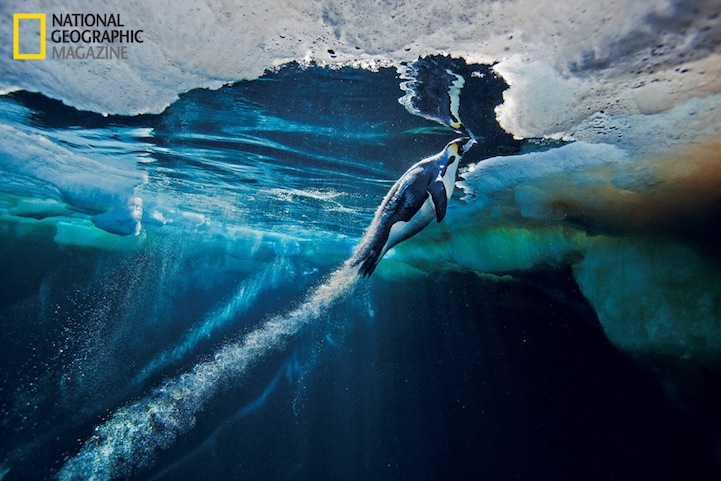 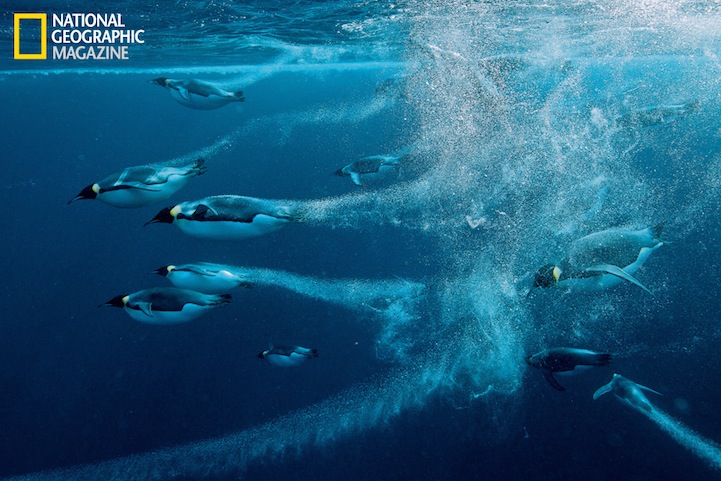 Emperors can bolt away for any number of reasons, as photographer Paul Nicklen discovered when he spooked this group.
Photo credit: Paul Nicklen/National Geographic 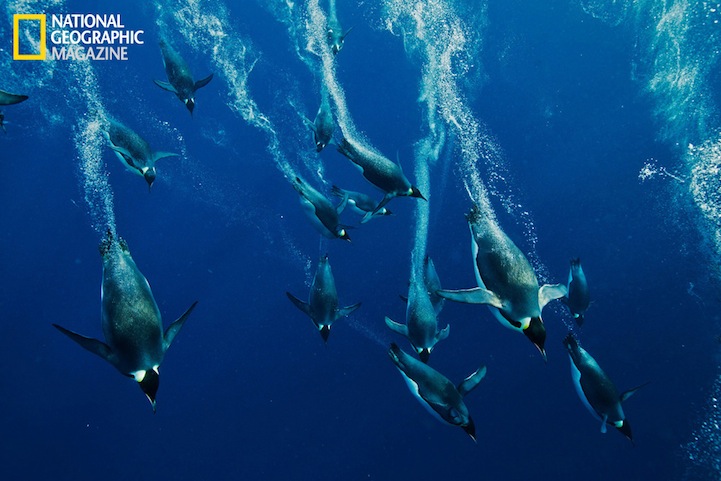 Emperor penguins are Olympian swimmers, capable of diving to 1,750 feet and remaining underwater 20 minutes on a single breath. “I was mesmerized by their beautiful bubble trails,” says Nicklen, who braved 28F water to capture these images.
Photo credit: Paul Nicklen/National Geographic 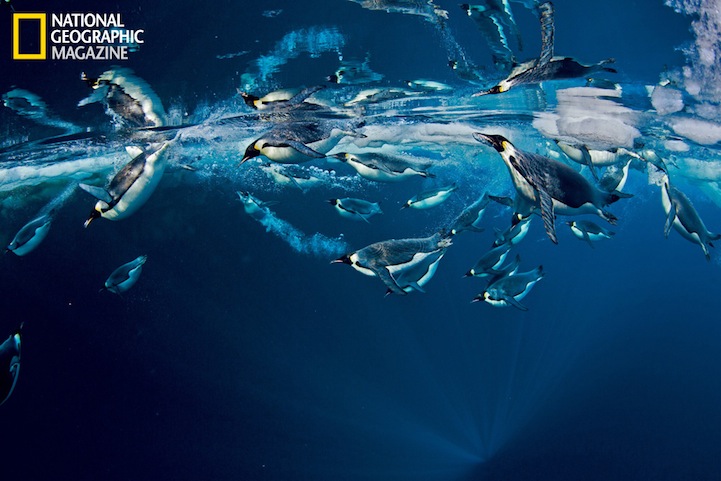 After hunting at sea to get food for their chicks, adult penguins swim at the surface, which loads their plumage with air. Then they'll dive deep, gather speed, and race toward their exit hole.
Photo credit: Paul Nicklen/National Geographic 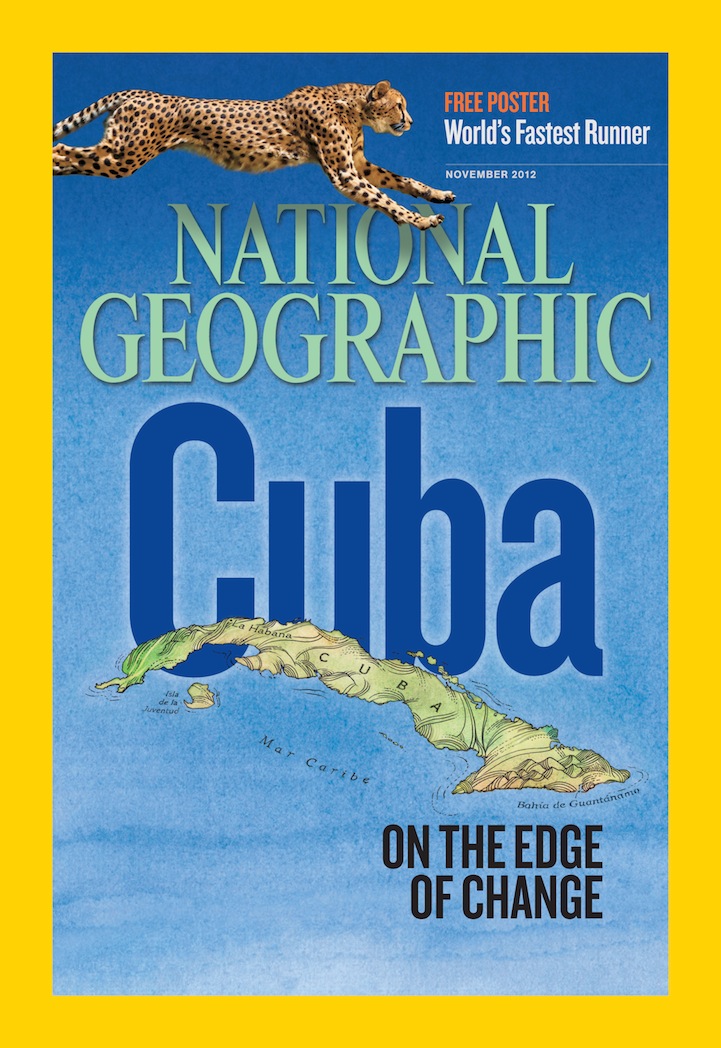