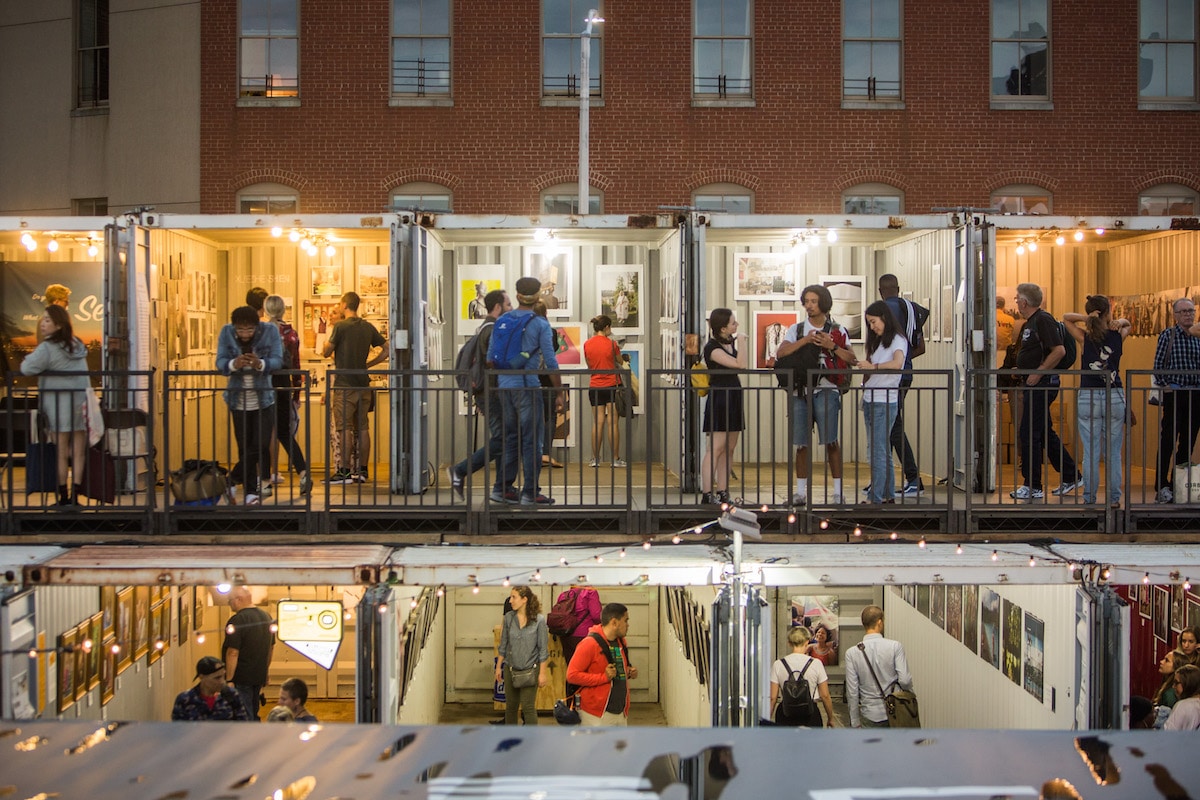 For the better part of a decade, the Brooklyn-based event Photoville has been enlightening and sharing thought-provoking photography with audiences of all kinds. This annual free-to-attend event is organized by the nonprofit United Photo Industries. It seeks to democratize art viewing by removing it from the gallery setting and temporarily into a collection of shipping containers.

Photoville 2019 promises to be as engaging, entertaining, and family-friendly as when it first debuted in 2012. My Modern Met had the pleasure of speaking with Laura Roumanos, one of Photoville’s co-founders, about what you can expect when you enter the photography village in DUMBO. In short, you’ll see images from more than 600 global artists that shed a light on culturally relevant issues. One example, she tells us, is a topic that’s often talked about in the news: “We’re producing a project which is looking at the overdose epidemic and how the media uses photography to illustrate the opioid crisis.”

Accessibility is a central component of Photoville, and Roumanos has seen first-hand how its content and setting brings in a variety of people. “The biggest joy we have is when we have 500 middle and high school students who come on our education day,” she explains, “or when we see nearby construction workers taking their hour lunch looking at work.”

Although the topics presented can be heavy ones, Photoville balances their 85 exhibitions with other activities—including educational workshops and food—that prove fun for all ages. “We get so many people, especially young families, who come and meet up with their friends,” Roumanos says, “so they can hang out in the beer garden while their kids are playing with photo puzzles, so they can see really challenging work while their kids are also being challenged and entertained, too.”

Photoville is a 10-day event that runs from September 12 to September 22, 2019 in Brooklyn Bridge Park. Learn more about the free outdoor festival when you scroll down for our exclusive interview with Roumanos. 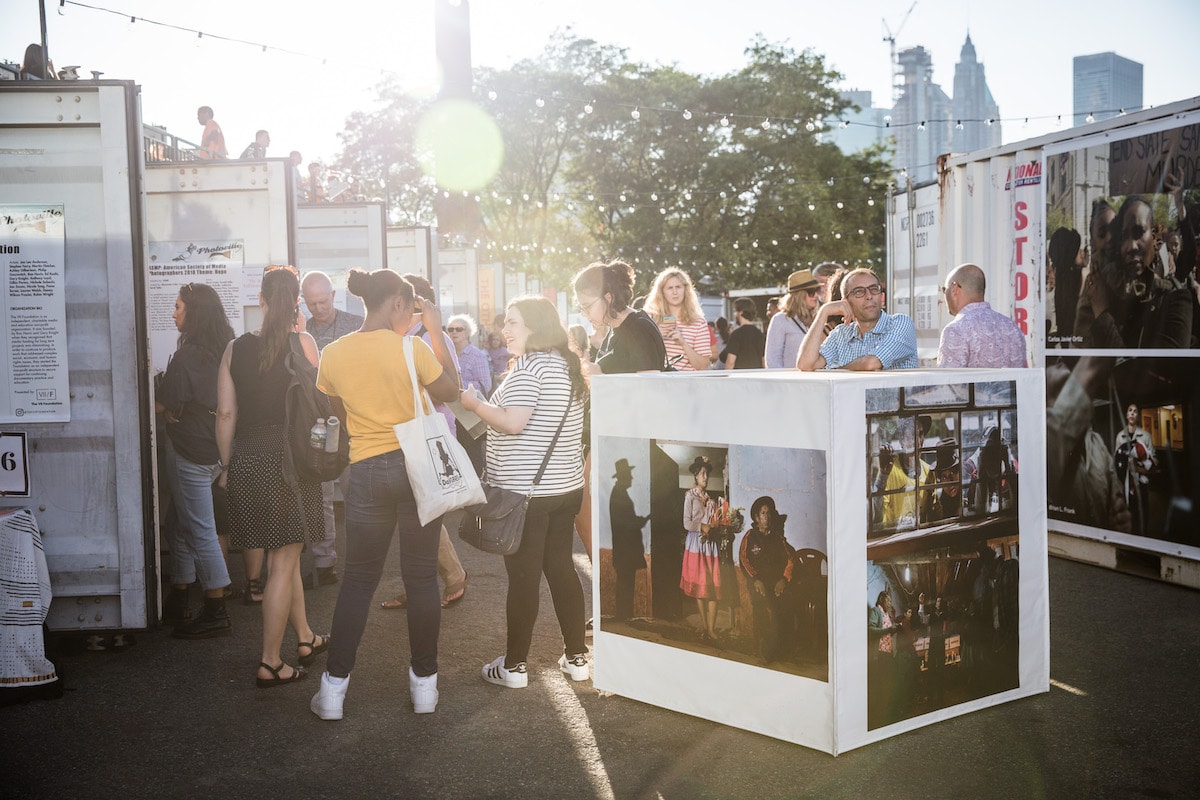 Can you describe the inspiration for Photoville?

Photoville was founded and created by myself, Dave Shelley, and Sam Barzilay. All three of us were working in New York in the neighborhood of DUMBO. David and Sam were working at another photo festival in New York, and I was producing a lot of public art, music, and theater. We had the idea of creating a place where you could have a critical mass. We were looking at festivals all over the world, which usually when there is a photo festival it takes over a whole city, but there are different locations spread out and usually when you go to one thing—you're probably not going to go to everything.

The idea of shipping containers came because we were working in the neighborhood of DUMBO on the waterfront. Sam came up with the idea of let's put work in shipping containers. We could create a space where we can provide a platform for artists, arts organizations, and different companies that all embrace visual storytelling through photography, and that's how Photoville was born.

Right before the first Photoville, we did a mini pop-up as part of the DUMBO Arts Festival and that was four shipping containers. It was in 2011, and we hadn't really thought of the concept of Photoville at that point. It was more about just the shipping containers and showing work in a democratic way. 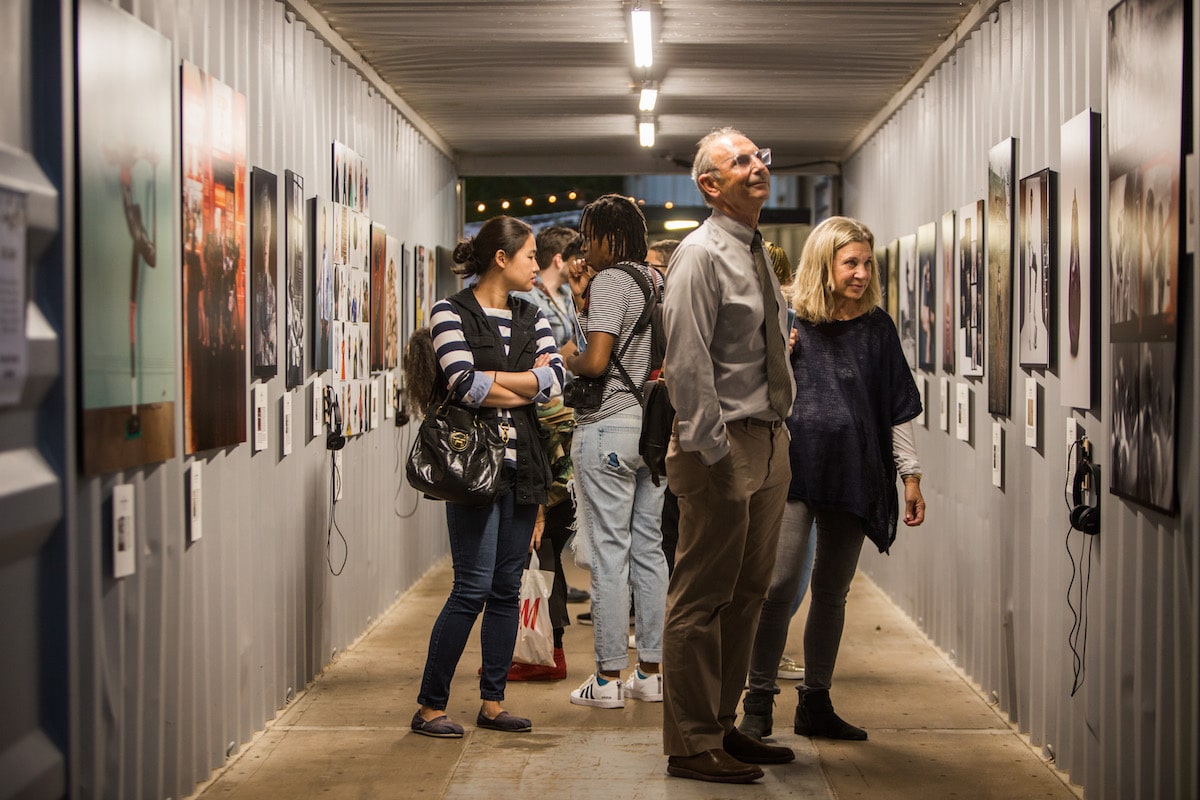 (continued) Why spend all this money on brick and mortar when really you want to reach a really large audience? The then-president of Brooklyn Bridge Park, Regina Meyer offered us a pop-up space.

We were going to only have 10 shipping containers, but in early 2012, they presented us with 80,000 square feet, and we were like, “Let's take it!” We pounded the pavement and started reaching out to artists and organizations such as The New York Times, the Magnum Foundation, Open Society, Foundation Media, and more.

We started bringing on different organizations to curate the containers. In our first year in 2012, we only had roughly 30 to 40 exhibitions. It was a huge success—we had over 40,000 people, even in the heat. And fast forward to now—we're projecting 2019 to be over 90,000 people. 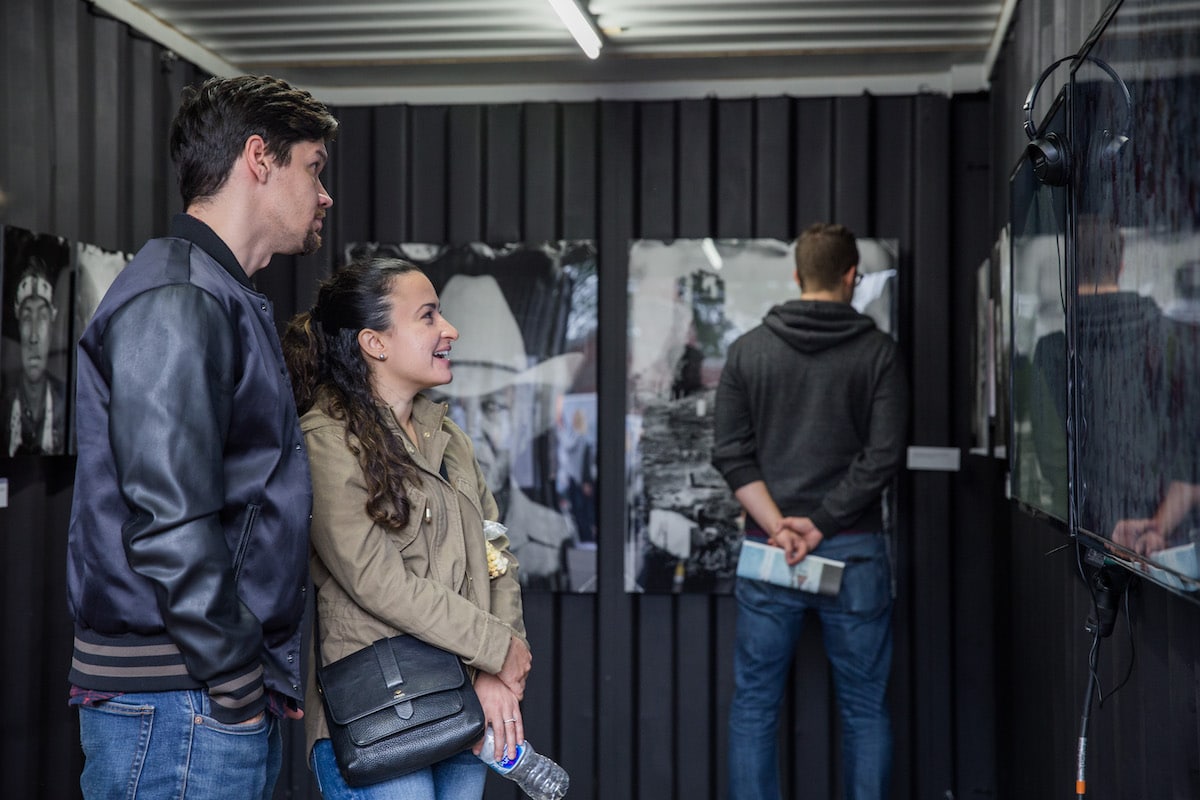 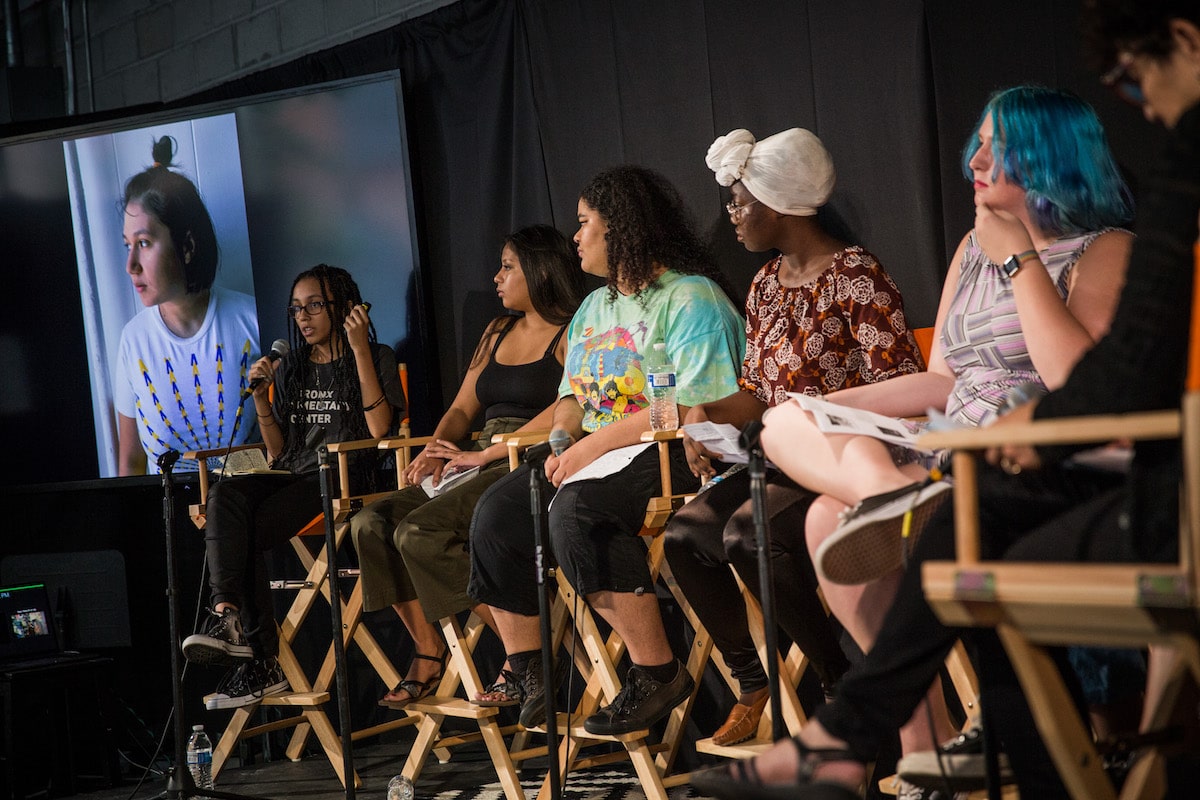 We have over 85 exhibitions inside and out of the shipping containers. We have talks and workshops, family-friendly activities, nighttime events, and it's all free. The idea is to make these visual stories accessible to everyone. We are really trying very hard to promote photo in the outer boroughs of New York and making sure people do come, as it's really providing new audiences for these artists and these organizations that they would not necessarily get to.

What's so great about Photoville is that you can spend all day or you can spend a few hours. It is open to the public and is very family-friendly. We even embrace everyone's dogs. (We have little drink stations for dogs!)

Everyone is so busy, and most folks now only have a day off. Most people do work six days a week now or they have really weird hours. And if you have a very limited time you want to spend it with family, with friends, then Photoville is a great place to see great work, but also we have a beer garden and roughly five to six food vendors from Smorgasburg.

We have a giant size photo puzzle. We have a walking tour so you can actually spend a whole day. You can go see some work in a container or a few containers and go to the beer garden and grab some food, grab a drink then maybe you can go and watch a talk or do a workshop. So there are so many things to do and we usually see that most people come back a few more times. 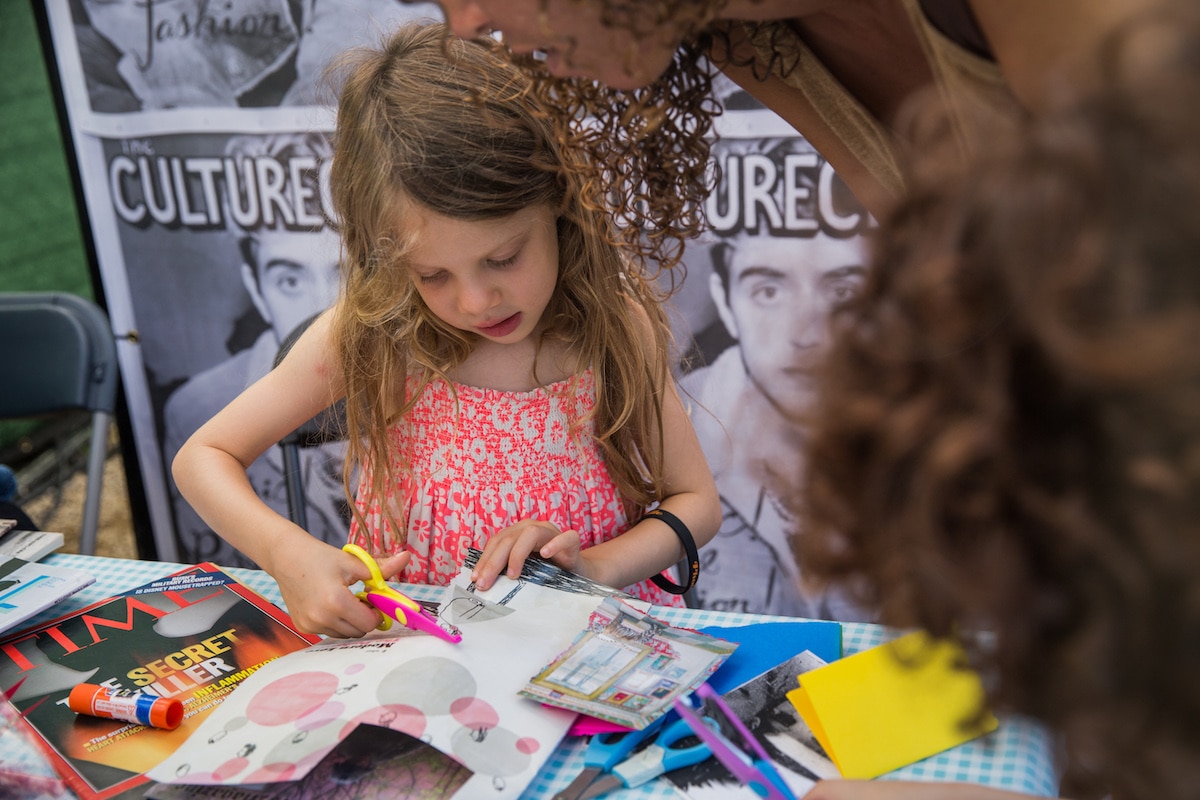 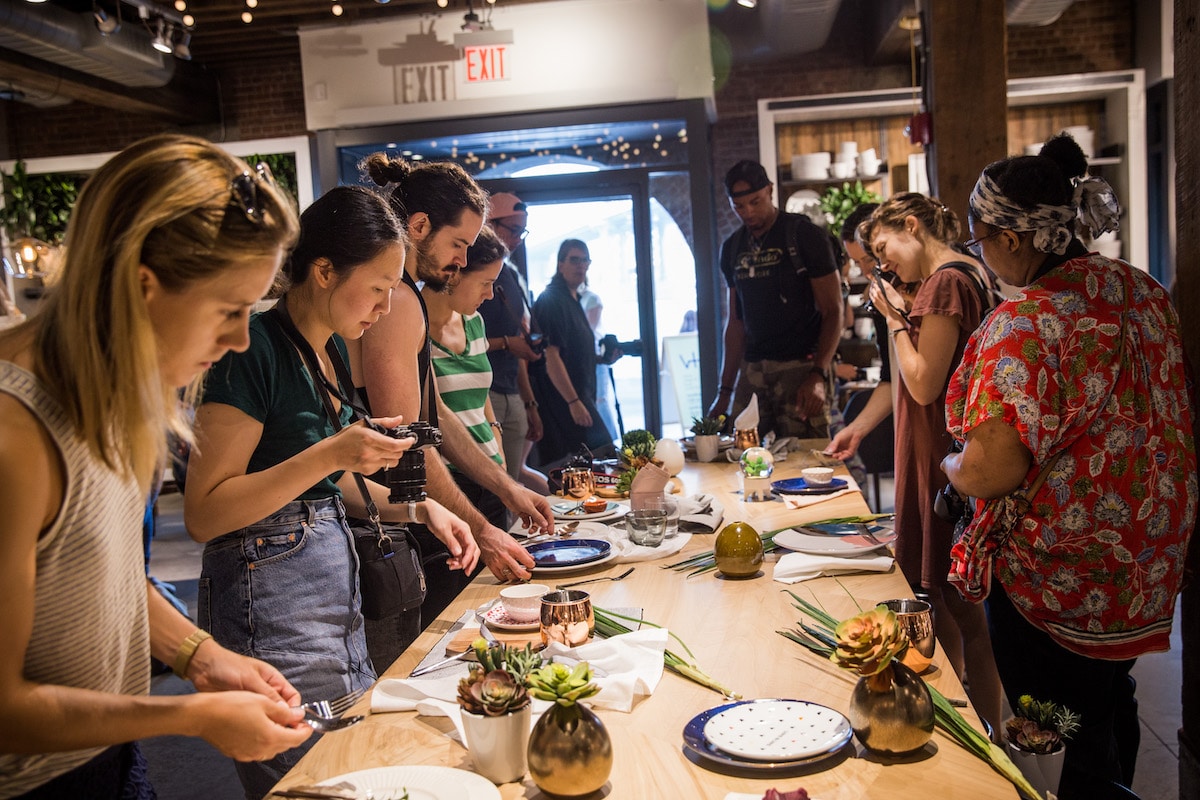 What are some of the events or exhibitions you’re really excited about?

One which we're producing in collaboration with the Committee to Protect Journalists is at St. Ann's Warehouse. This is actually the first time that we've ever done a big exhibition outside of the containers. St. Ann's is a great space in DUMBO right next door to Photoville. Basically, it is all about how journalists, if you think about it, are under fire right now. They are being labeled an enemy of the people, we're talking about “fake news,” and I think this is to remind us that we have journalists, especially photojournalists, who are literally out there risking their lives to make sure that we see what's going on in the world.

Another few other exhibitions that we're excited about is The New York Times. We're partnering with them on several exhibitions. One is the women of the 116th Congress; Elizabeth Herman and Celeste Sloman were assigned by The New York Times to photograph all the women sworn into Congress in the last year. They are really beautiful portraits. We're also collaborating with The Times on another exhibition project called #thisis18, which they assigned 18-year-olds from all over the world to photograph what it means to be 18. 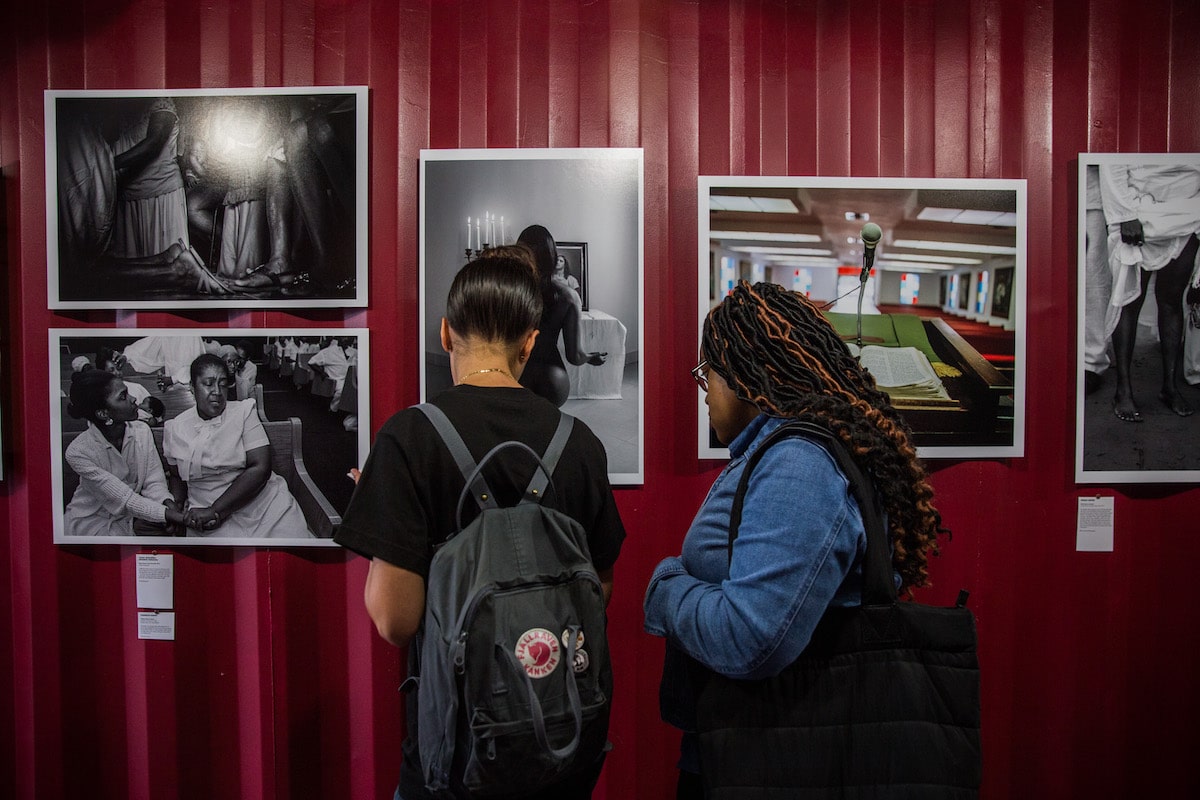 (continued) One more exhibition I'm excited about is about Playboy. If you really think about it, Playboy is really from photography and visual storytelling perspective. They hire so many women. In the last few years, they're really looking at people of color and the LGBTQ community and representation is important to them. And so this is looking at work from 30, 40 years ago and how it's influencing the kind of visual storytelling they're doing today and beyond. It's amazing and I think that it's really going to pleasantly surprise a lot of people. 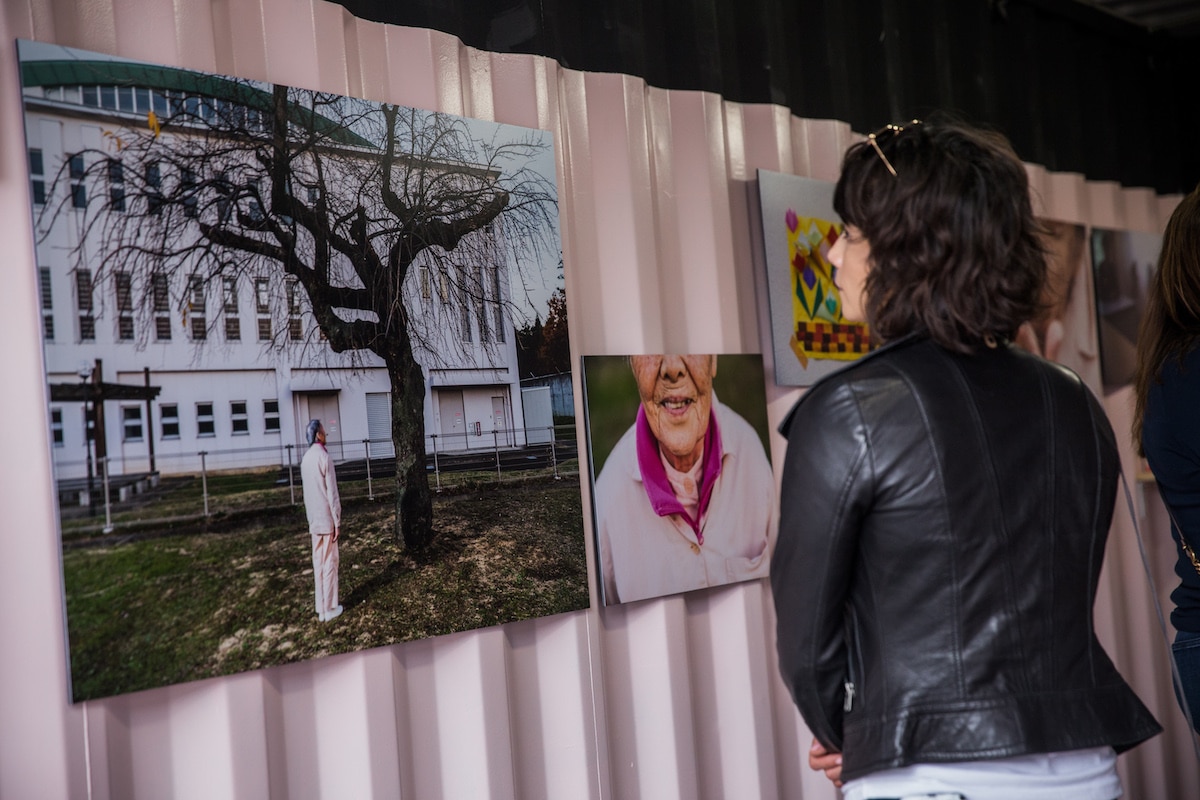 How can an artist get involved with a future Photoville, and what can they expect?

We always say “we curate the curated,” so we announce an open call at the beginning of the year for creatives to propose their idea and projects.

I would say a third of these exhibitions we have a very heavy hand in—at least 10 of them we're producing ourselves. There are others which we provide the space and help them with the signage and with guidance. We have a whole team to help them with production, but they're very much curating their space. 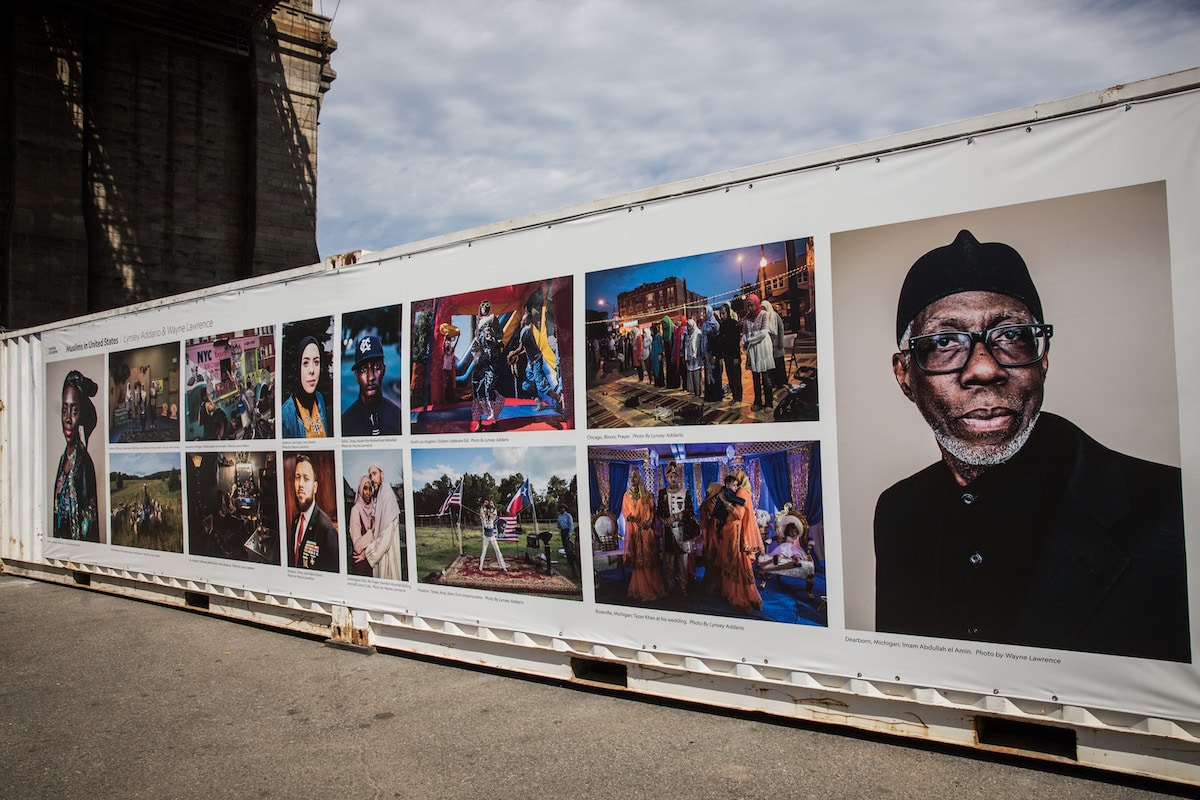 This interview has been edited for length and clarity.

Interview: How ‘The Photography Show’ Became the Premier Event for Contemporary Photography

Know someone that would love Photoville? Share
Like My Modern Met on Facebook
Get Our Weekly Newsletter
Become a
My Modern Met Member
As a member, you'll join us in our effort to support the arts.
Become a Member
Explore member benefits