Pic of the Day: After the Quake 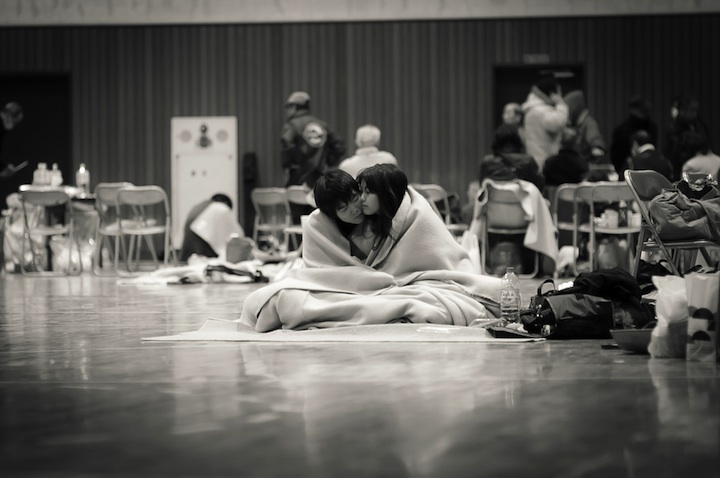 Jonathan Puntervold took this heartwarming/breaking photo on March 12, 2011, one day after the quake.

“I was in a train headed north from Tokyo with two of my friends when the quake itself happened,” Puntervold told us. “The train was suddenly put to a halt, after which the ground started shaking, along with the surrounding buildings and the train itself. Everyone sat in the train acted very calmly, which was reassuring, and during the quake itself I was never particularly frightened.

“Having never experienced an earthquake before, it never occurred to me that somewhere else, hundreds of kilometers away, the damages could be much more severe. It was only after being grounded in the train for about 90 minutes and getting off at the nearest train station, called Shin-Kanuma, that we heard that a tsunami had hit the coast and there could have been quite a bit of damage. The phone lines were down and we were experiencing some power outages, so there was a lot of confusion going on. I remember the first information we got was that although there had been some injuries, only one person had died as a result of the tsunami, a number that, of course, rose dramatically as time went on.

“It quickly became clear, however, that the trains wouldn't start running until the next morning, and the town only had one hotel, so we were told to go to the local high school. There had been set up an emergency shelter, and we were met with blankets and canned foods. We slept there with about 300 other people. Everyone was calm, to begin with at least, since there wasn't a lot of information at the time and no one had been injured, at least as far as I can tell.

“It was the morning after that you could sense a distinct change of air, people were either holding on to each other, and their families, or silently sitting, somewhat paralyzed, listening to their radios. I took the picture of the young couple, who seemed so in love with each other that nothing could tear them apart.

“A truly inspiring sight in the middle of all the angst and confusion.”