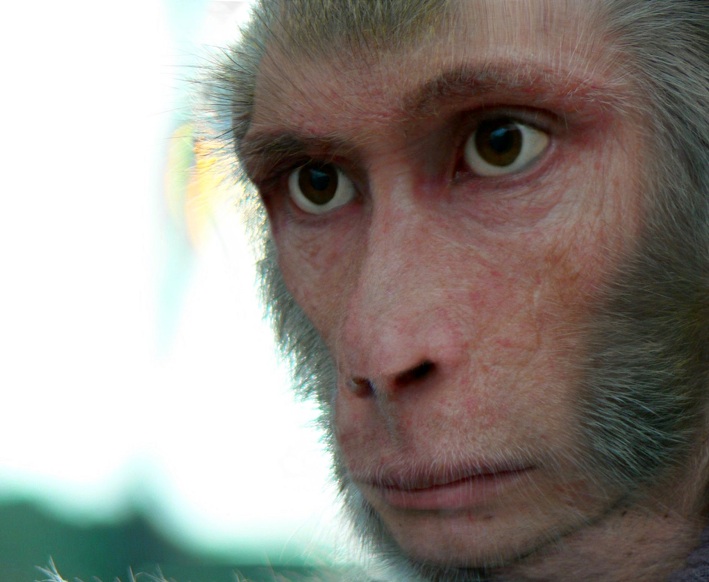 Ready to get creeped out? Emmanuel Perez-Duarte masterfully morphs together his own face and that of a monkey's for this shot he's titled, “The Origins of Evolution.” We got in touch with the Paris, France-based photographer to ask him how he achieved this fantastically freaky look.

“I had been experimenting on morphing software, which allows to go from one face to another (in theory, both human) in a smooth transition: taking an image from the middle of the transition and correcting it in post processing allowed me to make ‘hybrid,' or ‘blended' people. The result was a lot of fun and made the people who knew the two ‘blended' ones very uncomfortable.

“The next step seemed obvious: blending a human face with an animal face – and what better choice than a monkey? The similarity of its face with a human face made the experiment quite easier than with other animals. I looked at my stock photos and found a pretty good shot, up-close, of a monkey, and voil!

“I first used a morphing software Squiz Morph to help me distort my face and the monkey's to make them match, and then most of the work was done in The Gimp, which is a open source image manipulation software similar to Photoshop.”

How exactly did the public react to such a startling and realistic-looking figure? “I hadn't anticipated the primary reaction, which was that people found it creepy, frightening and so on: my point was to make something funny!,” he says. “Some people did find it funny though, as it appears in the comments. Then came other reactions for which I hadn't intended (though in retrospect didn't surprise me): those reactions (some in the comments, many by email) seemed to imply that I had made the image to prove a point on evolution – which was not the point at all!