Pic of the Day: Spectacular Split-Shot Taken in Antarctica 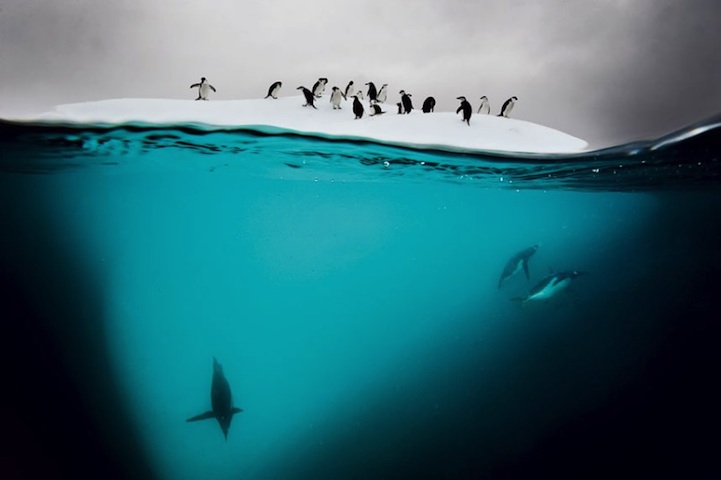 The upcoming book, The Masters of Nature Photography features ten amazing portfolios from ten of the world's top nature photographers. They are all past winners of the Wildlife Photographer of the Year competition which is run by the Natural History Museum and BBC Worldwide. The book showcases 120 incredible photos in all and includes everything from striking animal portraits to underwater photography.

One of the 10 celebrated photographers included in the book is award-winning David Doubilet who began shooting under the sea at a young age of 12. Often featured in National Geographic, he's photographed in waters all around the world including those surrounding New Zealand, Canada, Japan, Tasmania, and Scotland.

This photo, called Penguins, Ice and Light, is one of Doubilet's finest. Taken in Antarctica, it shows playful penguins and a large iceberg above and below the sea.

Here's how he describes it, “I came late in life to the ice, but now ice is in my blood. I've been seduced by icebergs, and over the past few seasons, I've been working on them at every opportunity. I think of icebergs as a perfect metaphor for the sea – only a small percentage is visible to us. We were lucky to find this bergy bit with a small group of chinstrap and gentoo penguins squabbling on top of it. I made a few frames of the idyllic scene before they began to push each other off, and slide down one side, pop up on the other and start over again. I was excited when two gentoo penguins circled the ice under water, providing perspective. Look how much ice there is below water. One of the greatest joys of shooting half-and-half is that there's always a surprise – especially the way the surface receives the light.”

This image and much more will be published in The Masters of Nature Photography book which will be released on September 10, 2013.

If you love these kinds of photos, taken above and below the sea, make sure to check out more, here.