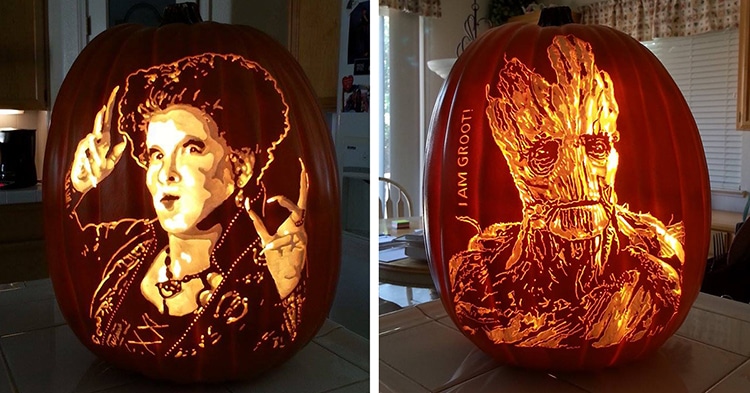 Halloween is just around the corner and things are about to get spooky! It’s time for scary costumes, grotesque makeup, and perhaps the most fun activity of all: pumpkin carving!

Alex Wer, also known as The Pumpkin Geek is the king of pumpkin art. He started his “orange empire” during the Halloween of 2009 when his wife asked him if he could carve her company logo into a pumpkin. He chose to use a craft pumpkin instead of a real one, so it would last forever. Wer soon started getting orders from other companies and even received commissions for children’s portraits.

Wer’s process—which is referred to as a “4 color” technique—involves carving at multiple depths: one completely cut out, two of differing levels, and another untouched layer for the darkest areas of the image. When illuminated from within, an incredibly detailed image is revealed. Lately, Wer has introduced a 5th layer of carving to achieve further levels of detail. Each amazing design is hand carved and takes between 4-6 hours, depending on the complexity.

In 2013, Wer won the inaugural Geekie Award for Best Art/Craft. After this recognition, his career soared and he has since provided pumpkins for Netflix, ESPN, and Legendary Entertainment. Today, Wer’s prodigious pumpkins are world famous and his clients include celebrities such as Gene Simmons, Busy Philipps, Jeri Ryan, Ming Na, and Joe Montegna.

If you would like a pumpkin portrait of your favorite movie hero, musician, or even yourself, you can place an order through the Pumpkin Geek website.

Check some out the Pumpkin Geek’s amazing pumpkin carvings below.

There are superhero pumpkins…

…and even celebrity portraits.

35 Creative Pumpkin Carvings to Spice Up the Season