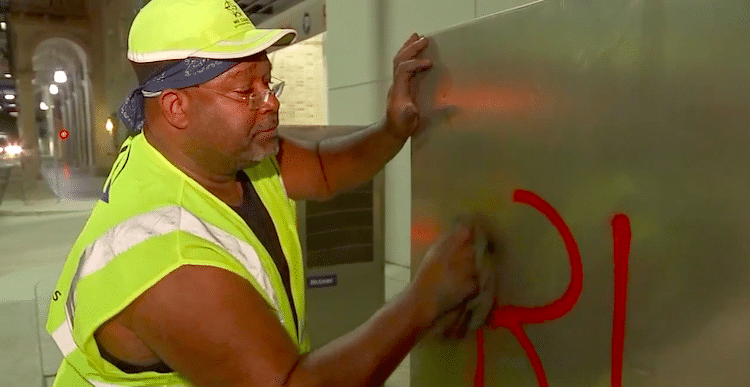 Following the tragic and unjust murder of George Floyd in Minneapolis, crowds of people across America and beyond have been taking part in protests. For the most part, the demonstrations have been peaceful, but in Texas, Governor Greg Abbott declared a state of disaster on Sunday after a weekend of violent protests and chaotic unrest.

When Brian Irving was watching live coverage of the protests in his hometown of Houston, he decided to take matters into his own hands and do something about the damage that was done. In the middle of the night, he got dressed and went out to clean graffiti with his pressure washer by hand. He spent 4 hours erasing the spray paint and doing what he could for the city he’s lived in for 50 years. “I said, ‘Let me go down there and let me clean up my city,’” Irving explains. “What came to my mind was what JFK said—‘Ask not what your country can do for you but ask what you can do for your country.’ I’m coming down here to put my little bit in.” It’s important to note that Irving understands the anger of the protestors, but hopes to stop the destruction by at least reversing it as much as he can. He says, “We can protest, but we don’t have to destroy the city.”

Irving isn’t the only one who has taking it upon himself to help save a beloved city that has been worn down amidst the full weekend of protests. Across the country, citizens are gathering to help clean up the wreckage. In fact, there are even families going out together to help clean walls in Minneapolis, sweep up broken glass in Seattle, brush up debris in Santa Monica, and make sure their neighborhoods in all parts of the country are kept in standing condition.

Want to find a way to fight for justice for George Floyd? Check out a list of where you can donate, provide support, and educate yourself here.

All across the U.S., people have been coming together to protest injustice and racism. Now, communities are gathering once again to clean up their neighborhoods after a full weekend of protests.

When Brian Irving was watching live coverage of the George Floyd protests in his hometown of Houston, he decided to do something about the damage that was done.

In Seattle, there are also people voluntarily helping to clean up the city after protests.

This is lifting my spirits. Seeing families bring their kids out to help clean up. pic.twitter.com/qscTL5JLbc

People in downtown #Seattle this morning, trying to help put their city back together. ❤️

Volunteers — of all ages — headed into Downtown #Seattle Sunday morning to help the city clean up after the #SeattleProtests Saturday night.https://t.co/UfcdCUqHVz pic.twitter.com/wyaDIZjGRy

All images via ABC13.

Interview: Black Man Convinces 200+ Members to Leave the KKK by Befriending Them