Remembering Murdered Women Around the World 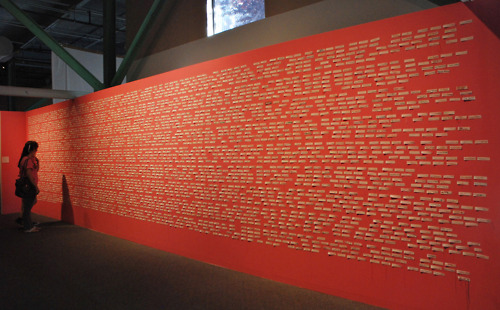 Artist Lise Bjorne Linnert has catapulted this ongoing social project involving 3,700 people in over 25 countries. As of June 2011, more than 5,500 hand-embroidered labels have been displayed to represent women who have fallen victim to extreme violence. The generally pink panel is adorned with countless white labels displaying the names of these women who met unfortunate fates. There is an undeniable humanness to the simple gestures, marking each of the names in a unique style, color, and handwriting.

Linnert's politically driven installation entitled Desconocida Unknown Ukjent first started in 2006 as a response to the maltreatment, abuse, and murder of women, specifically in Ciudad Juarez, a city bordering Mexico and the US. At the time, 800 women were killed in that city in just a little over a decade. The project has since expanded, showing at different venues around the world. Each installation is site-specific, having been displayed on a wall, stage, or a sort of runway. We had the good fortune of getting in touch with Lise to find out more about this project and the artist, herself. You can read that interview, below. 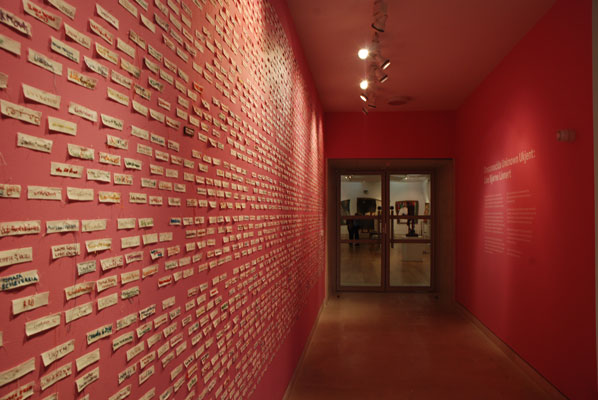 Can you please give us a brief background of yourself?
I was born, live, and work in Oslo, Norway. I have art education from Norway and the US. My work is idea and process based and, in some cases, relational. I work with multimedia, choosing the material best suited for the actual idea (drawing, textile, performance, sound or photo) and often use a combination. Time is an essential part of my works' development and content. This art practice leads me to work with several projects at the same time and often over several years. Although visually different, the essence of all projects are a research into intimacy, presence and interpersonal relationships, sometimes starting from me and my own life, other times with focus on society. My work is often political or social oriented. 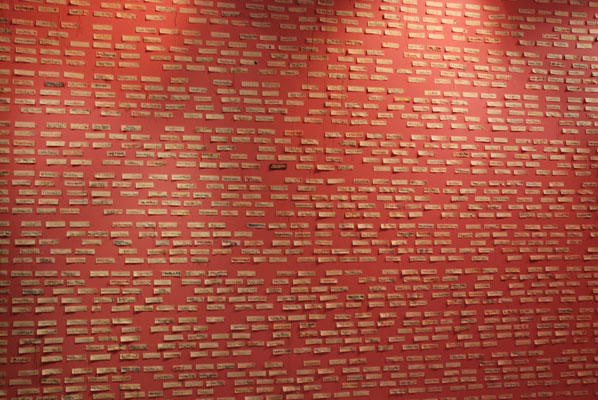 Did you ever hesitate to create this artwork due to fear of negative repercussions?
I was invited in 2005 by the Station Museum of Contemporary Art to create an art work dedicated to the women in Ciudad Juarez and the situation there. It resulted in initiating Desconocida Unknown Ukjent. I have never hesitated to create this work, rather it has become very important to continue it as long as the situation in Ciudad Juarez remains unchanged. I also see Desconocida as a way to connect us and see that this is not about “them” but about us. Abuse and murder of women is happening in every country and society. 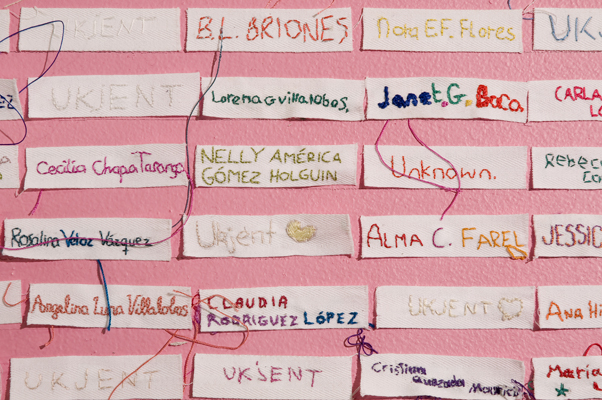 How have conditions in Ciudad Juarez changed since this project's development?
Unfortunately, the situation in Ciudad Juarez has not improved, rather the opposite. Just this year, until November 2011, 332 women have been found murdered.  It is easier for me to feel safe because I live in Oslo. I have visited Juarez twice, in 2007 and 2008. I stayed with Marisela Ortiz Rivera, the leader of Nuestras Hijas de Regreso a Casa, an organization helping the children and families of the victims. I did not experience any difficulties during my stay. I would like to go back to Juarz, but at the moment it is too dangerous for anyone, I think, and the climate against activists and journalists in the region has become much harsher and threatening. Marisela is currently temporarily living in the US due to death threats. I also know that for her to temporarily leave is not an easy choice. 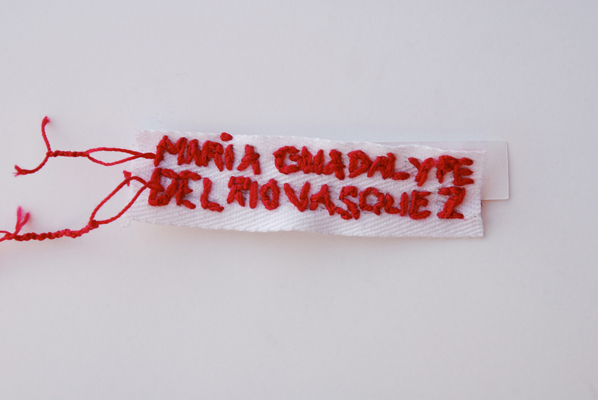 What is the one piece of information you think the public needs to know?
That women are continuing to be murdered in Ciudad Juarz, Chihuahua. The situation has not changed. The war on drugs started by the Mexican Government in 2008 has moved the situation and the society towards a collapse. Thousands of people: men, women, children have been murdered. Please seek more information in blogs from journalist Diana Washington Valdez and activist Marisela Ortiz Rivera and organization Nuestras Hijas de Regreso a Casa. 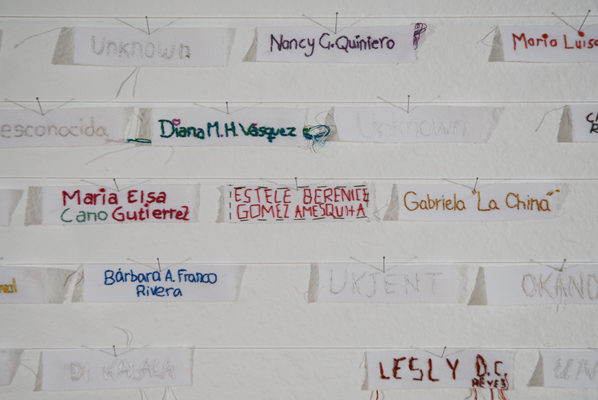 Are you optimistic or pessimistic about the future for the women in Ciudad Juarez?
I find it hard to answer this question. The way the situation looks today is pessimistic, harsh, extremely difficult. When I was there in 2008 I met strong, fighting women not victims. I have to believe in this. They still fight fiercely! 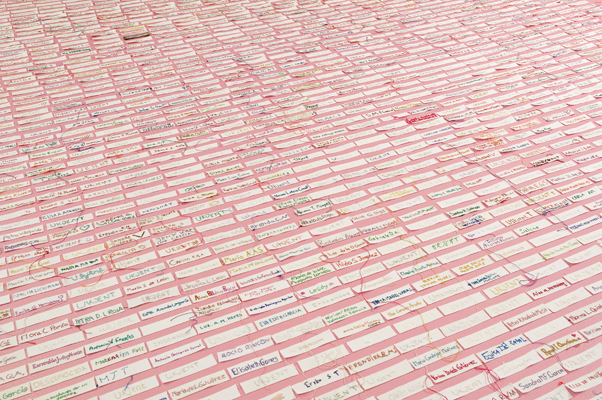 What's next for you?
I just got back from Pau, France where I installed Desconocida at Muse Bernadotte. I had 5,700 labels with me to install. The response in Pau was very good. There were 350 labels that were embroidered there, in 25 workshops arranged prior to the installation by the Museum and the art organization BonArt, involving 300 people. The installation will be up until February 26, 2012. In January, I will be back in Pau for a release of a catalogue. I am currently working with a choreographer and dancer, Runa Rebne, to create a performance made especially for the exhibition at Muse Bernadotte. The intention is to bring Rebne's interpretation and expression into the exhibition, which enables the creation of new connections with the spectators and, thereby, Desconocida's theme and content. Following this, I will have some time to work in my studio on other projects. 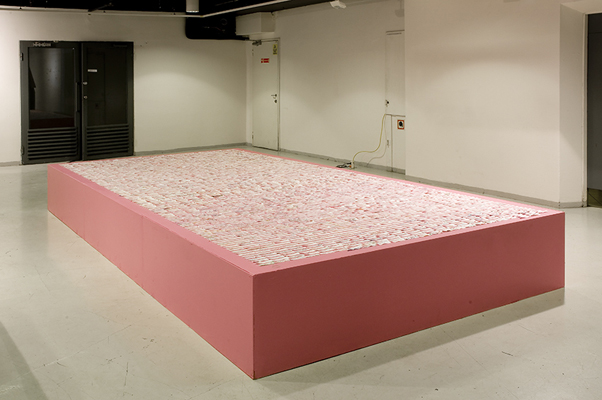 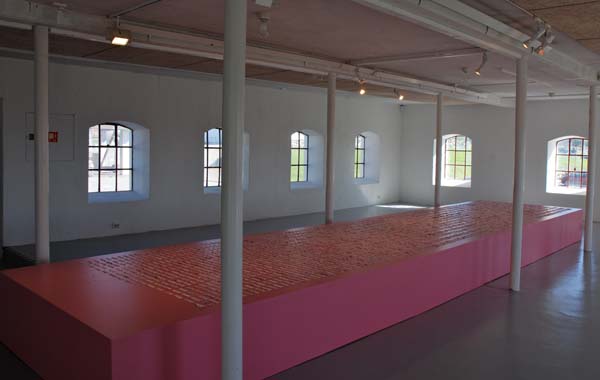 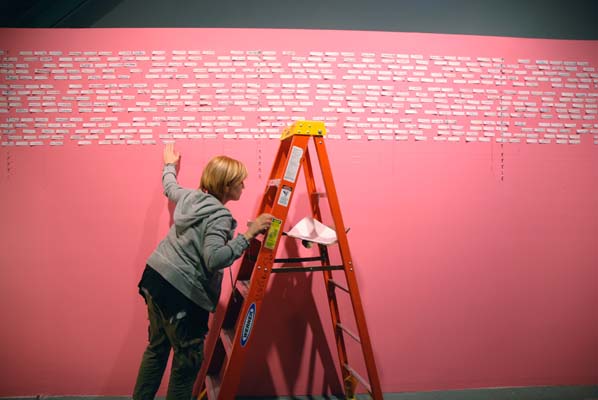