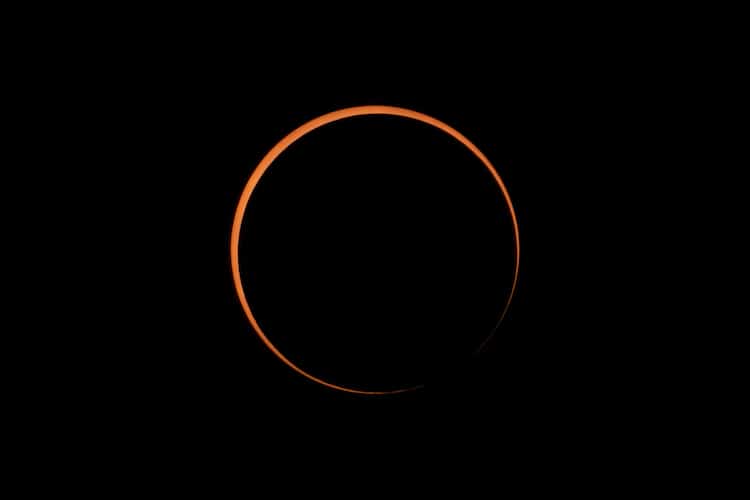 Skywatchers, get ready for a big event. The ring of fire solar eclipse is making its 2021 appearance on June 10. Also known as an annular solar eclipse, the incredible event occurs when the Sun, Moon, and Earth are in a straight line. This causes the Moon to almost completely block the Sun, leaving only a fiery ring visible. It's the last time we'll see one until October 2023, so get your special glasses ready.

The Sun, Moon, and Earth being aligned aren't the only requirements for an annular solar eclipse. It also must be a New Moon and the Moon needs to be almost as far as possible from the Earth in order for just the Sun's ring to remain visible. When everything lines up, that's when the spectacular event occurs.

While parts of North America, as well as most of Europe and Asia, are in line to see at least a partial eclipse, the real show is way up north. In North America, this means that Ontario, Nunavut, and the northern part of Quebec should see the full eclipse. Parts of Greenland, as well as northern Yakutia in the Russian Far East will also enjoy a full view.

The entire event can take up to three hours in areas where annularity is visible, though the actual time where the ring of fire is visible can last anywhere from one second to 12 minutes. As the 2021 annular solar eclipse starts at 4:12 am EST, with the full eclipse beginning at 5:49 am EST, it should make for some interesting photographs. At this time, the Sun will be just above the horizon, making for a dramatic scene.

Sky & Telescope is helping eclipse chasers make their way to the remote locations needed to view the full event thanks to their specially chartered flight. Lucky passengers will board at Minneapolis-St.Paul airport early in the morning of the eclipse. Over the course of the three-hour flight, the plane will move along a path specifically charted to ensure the best eclipse viewing. Talk about taking in the eclipse with style!

Want to watch? Share
Like My Modern Met on Facebook
Get Our Weekly Newsletter
Become a
My Modern Met Member
As a member, you'll join us in our effort to support the arts.
Become a Member
Explore member benefits
Want to watch?