Photojournalists Shine Light on Empowered Women Throughout the World 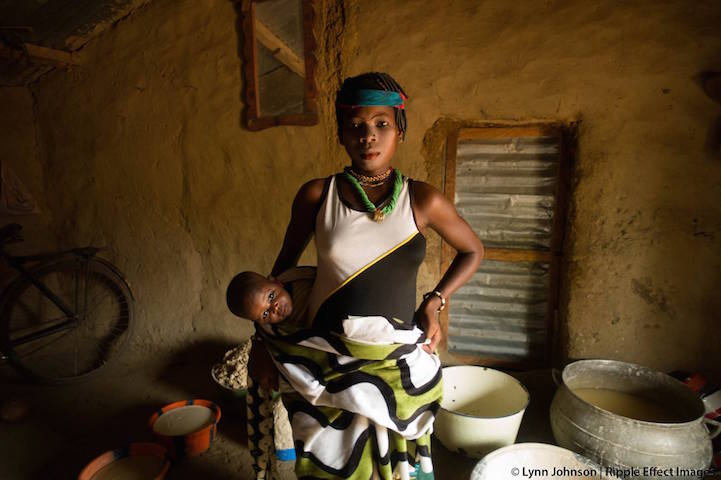 “I was about to begin a journey, the journey of my life, in understanding how extraordinary women are, and how even when we view them as victims they are in fact heroes and survivors.” – Annie Griffiths, Executive Director of Ripple Effect and Photographer. Today, be blown away by the powerful photos and stories from the Ripple Effect. A team of journalists have dedicated themselves to document the plight of poor women around the world and the programs that are helping them as they deal with the devastating effects of climate change.

As one of the first women photographers to ever work for National Geographic, Annie Griffiths has personally covered women's issues on six continents. For more than two decades, she's dedicated a portion of her time each year to document the important work of aid organizations.

The Ripple Effect team travels to international hot spots where women are playing are important role in social and environmental change. In their words, it's “where conflict and poverty meet dwindling resources, desertification, water scarcity, crop failure, rising sea levels, and the spread of disease.” By shooting more than 15,000 photos in over 13 countries, they've given a voice to 22 aid programs and have helped raise more than a million dollars for their aid partners. More than anything, they've helped shine a light on what women can do, no matter the circumstances.

Their mission is simple: Help a women, Help the planet.

First, take a look at the powerful photos, and then, take the time to read each inspiring story.

Above: In the village of Angaradebou of Benin, women and young girls paint their faces in celebration of a naming ceremony. The community gathers to prepare food and share in the joy of this special event. This festivity is especially hopeful, as it is uniting women that used to be divided by the competition for fresh food. Community spirit is one of the important outcomes of the garden effort Ripple Partner Solar Electric Light Fund (SELF) is leading across Benin. One woman said she works in the garden so that hopefully, “All the babies in the village will be fat babies.” Together, the women have turned sand to green in one short year. Now mothers have access to better nutrition and produce nutrient rich breast milk–just some of the many gifts from the garden. 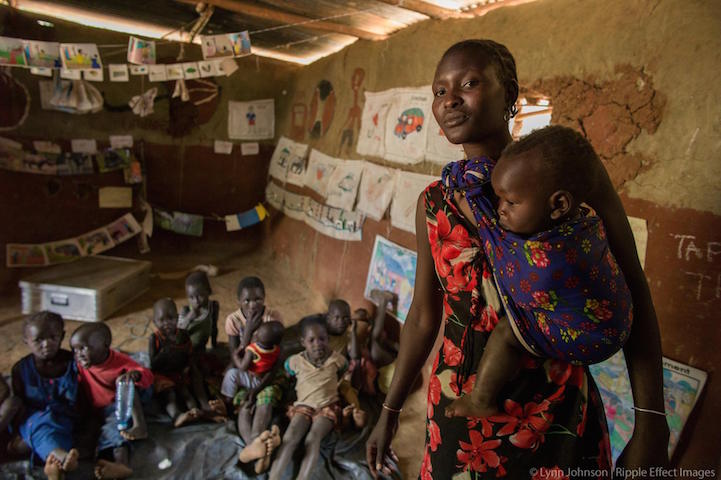 Maria, a caregiver and teacher in Karamoja, creates a safe place for children and young women, building a haven for all. Like most girls in rural Uganda, Maria has faced tremendous challenges, including lack of educational opportunities, abuse and forced marriage at a very young age. Now working with BRAC, she shines knowing she is “fine.” 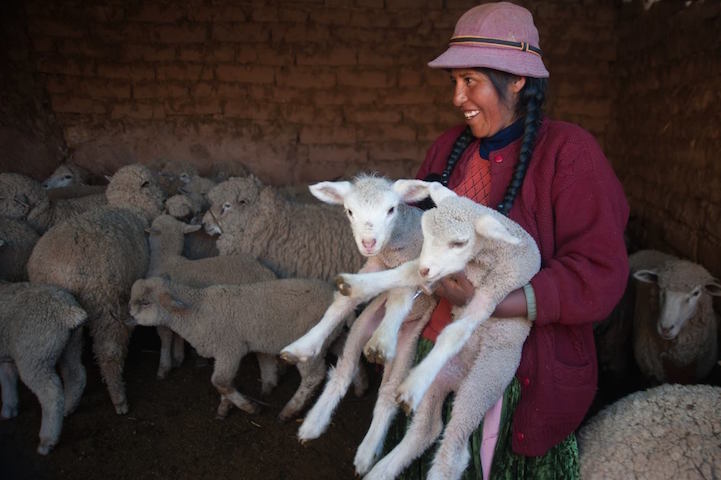 Lourdes Pilco is a Peruvian farmer in the Andes near Lake Titicaca. She has received help from Care Peru to learn basic veterinary skills. Knowledge about better feed, care and immunizations have made her livestock far healthier, despite the vast temperature variables brought on by climate change in the region. 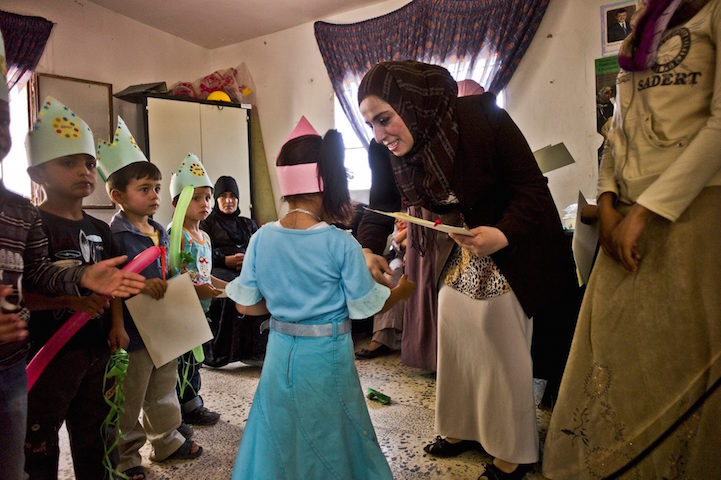 Jinan Naghabandi hands off kindergarten diplomas at her women-run CBO in Sawafi, Jordan, a small town on the road to Baghdad. Formerly a busy hub, the war has transformed Sawafi into a conservative, dusty town with little to offer- particularly to women. Jinan's story is no different. Arriving to Sawafi in 1996 to bury her husband in his home village, she'd soon find herself captive by her father-in-law who refused to let her leave with her children. As tradition dictated, Jinan followed the path of re-marrying one of her brother-in-laws in order to keep her children in her life. It took nine years for her to snap awake and break free- at which point she founded the Community Based Organization that has 50 members today. Incredibly, it has managed to grow and exist among the highly conservative residents of Sawafi. In addition to supporting a kindergarten, computer training and literacy programs, the CBO provides food, water, microloans and moral support to its members. 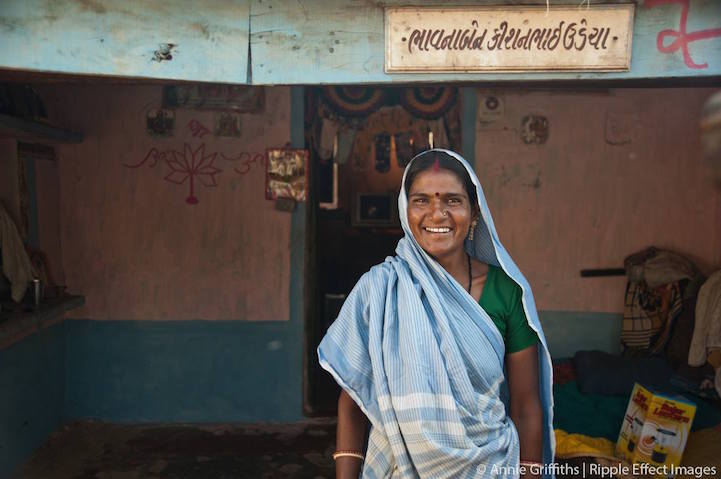 A woman smiles proudly under the sign that bares her name at the entrance of her very own home. With help from Ripple partner the Self Employed Women's Association (SEWA), she'll be able to maintain her home with the income she earns from building and repairing solar lanterns. SEWA helps women across India gain full employment and become self-reliant. Today, they have improved the lives of nearly one million members. 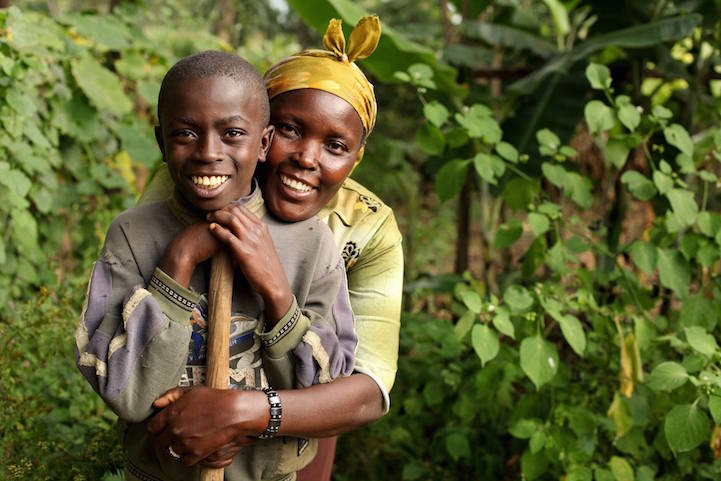 From a poor village in Kenya, Esther Gathaku considers herself rich in land, food, trees, and love. She is the leader of her small tree-planting group organized by Ripple Partner TIST. Esther's work with the community group has helped her learn the value of everything from community spirit to conservation farming. As a result, she has increased her corn harvest by 50 percent. She is most proud of being able to use her earned income from healthy crops to support her “helper” and adopted son, Anthony, who has matured with the trees they have planted together. From the pain of losing his parents to HIV comes his dream of being a lawyer to “help those in need who can't help themselves.” She is a force of nature. 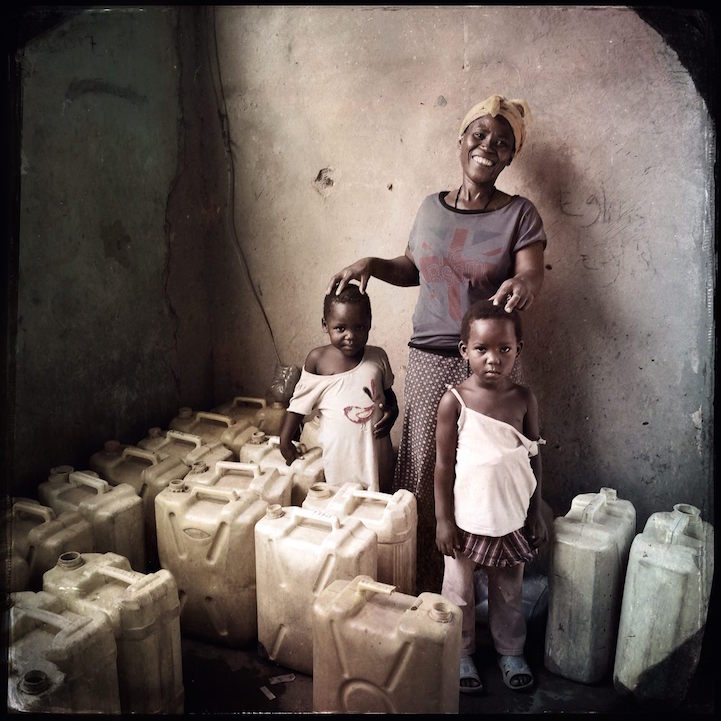 In Uganda, where the majority of people have no access to clean water, Sissy Nakalea serves as the Peacekeeper of the Well in her community. Sissy supports her children by hauling 40 jerry cans of water each day to other families who pay a small fee for her service. It's what a mother will do. 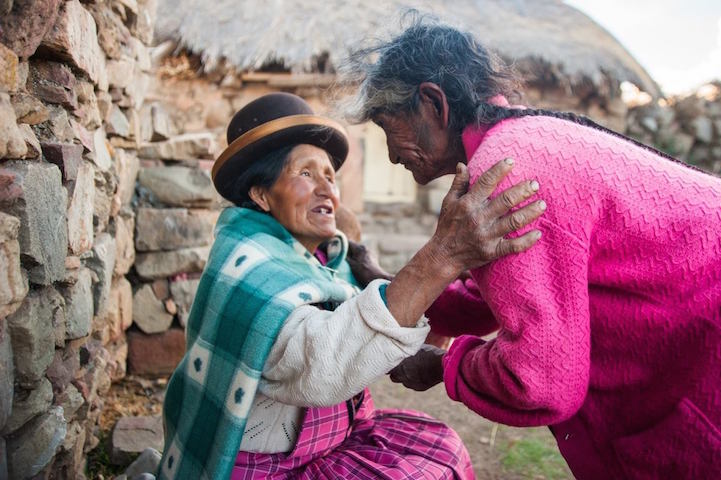 Sofia Pilco grew up in extreme poverty in the high Andes of Peru. She was homeless for years, until she learned about Heifer Peru's Healthy Homes program. With supplies from Heifer and help from neighbors, Sofia was able to build a little house, with a clean cookstove and the first bed of her life. Now Sofia works to help other women in her community. The traditional method of cooking exposes women and their families to daily toxic smoke.Three times as many people die from respiratory disease caused by cooking fires than from malaria. 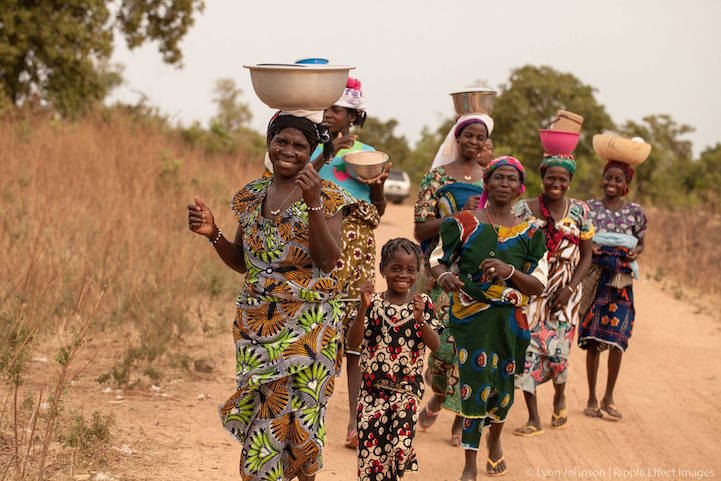 Competition is stiff among Solar Electric Light Fund (SELF) gardens in Benin, where women have turned sand to green in just one year. The abundance of water, eggplants, greens, onions, okra, mangos, carrots and yams is thanks to the labor of these women and solar powered water wells designed by SELF. 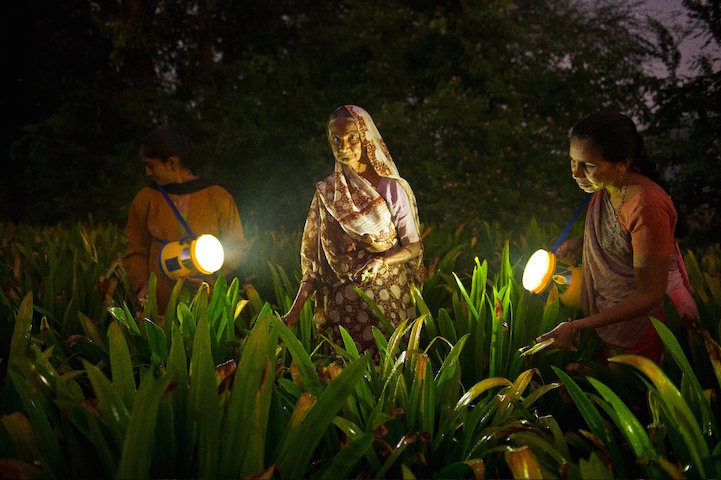 Women in Gujarat India collect lillies in the early morning to sell at a market. They are working with the Self Employed Women's Association, an organisation of poor, self-employed women workers. These are women who do not obtain regular salaried employment with welfare benefits and are the unprotected against big corporations. Of the female labour force in India, more than 94% are in the unorganised sector. However their work is often not counted and they are trying to get more protection through SEWA. Women who were once forced to be tobacco farmers now are able to use solar lanterns to pick flowers, generating badly needed income for their families. 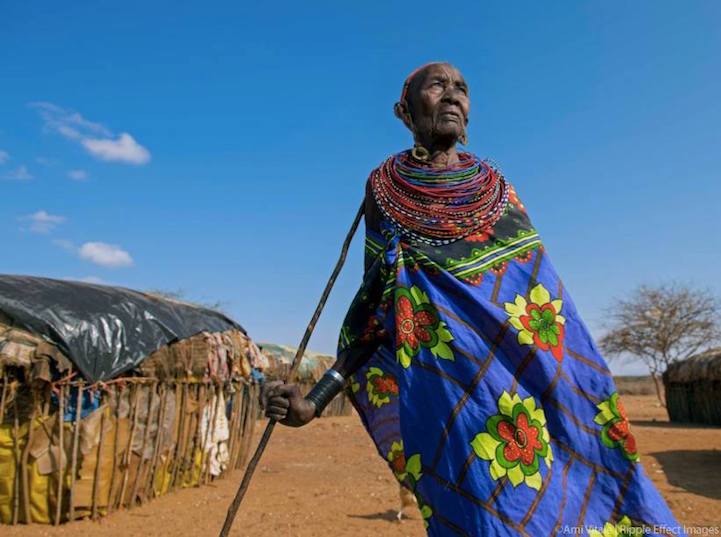 “I am old. I don't know how old but I remember WWII,” says Naltateni Lesepe. “In the past, we always had to ask our husbands for everything.” Aid organization Northern Rangelands Trust has brought water, a school, a health clinic and opportunities to women in Kenya. Their innovative bead program supports women in gaining sustainable financial independence. Naltateni rejoices, “Now times are changing and we women can earn our own money, which means we can send our children and grandchildren to school.”