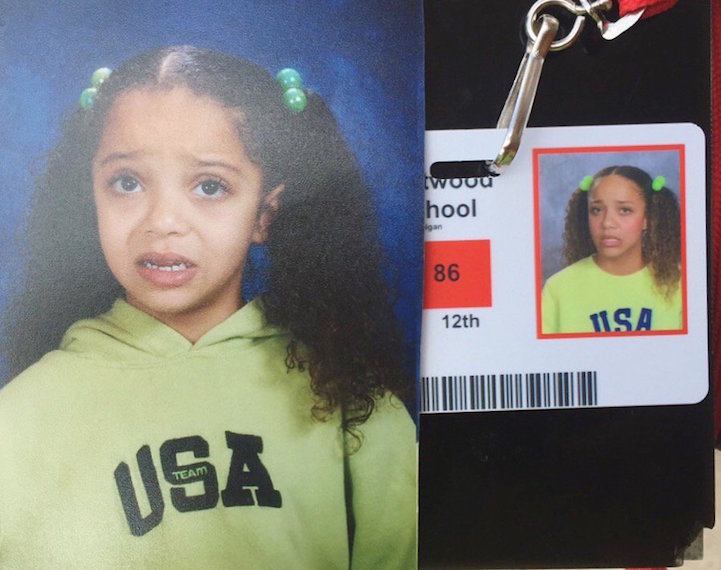 When the administrators of Michigan's East Kentwood High School told students to “get creative” with their school ID photos, no one was expecting the humorous idea that 17-year-old, Tyra Hunt, decided to do. The high school senior tells Buzzfeed News that her kindergarten photo sits on her family's living room mantle, and has become something of a joke. The photograph shows a young Hunt—who apparently didn't want to take the picture—with crinkled eyebrows and an unnerved mouth. To best show off her transformation from age 5 to age 17, Hunt decided to style her hair in matching pigtails and planned to squish her face into a similar anxious expression. Then she found a light green sweatshirt and ironed on “USA” to complete the outfit. She tells the local television station that's when she thought “this is going to be perfect.”

Hunt tweeted her side-by-side comparison on Tuesday afternoon, and to her surprise, the photo has gone viral. She says, “My friend told me to post it on Twitter and I had no idea it was going to blow up.” At first, she thought it might become popular within her hometown. “Then within like two hours, I had 300 retweets. It was crazy. Overnight, like 50,000 favorites.”

It goes to show that humans love to see growth and progress, and there's no better way to see it than with a healthy sense of humor.

Tyra's kindergarten to senior year photo has been such a success that it's sparked the latest Twitter trend: 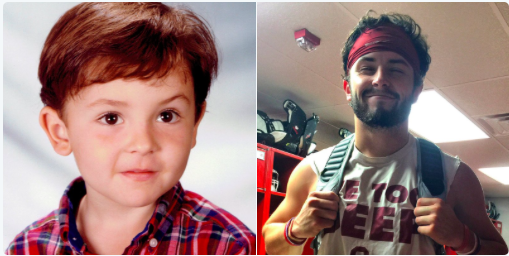 “From kindergarten to OU. Happy first day of school to QB Baker Mayfield (@baker_mayfield6) and all #Sooners. Make it a great year!” -Oklahoma Football (@OU_Football)