She Will Swim With Angels by Steve McGhee 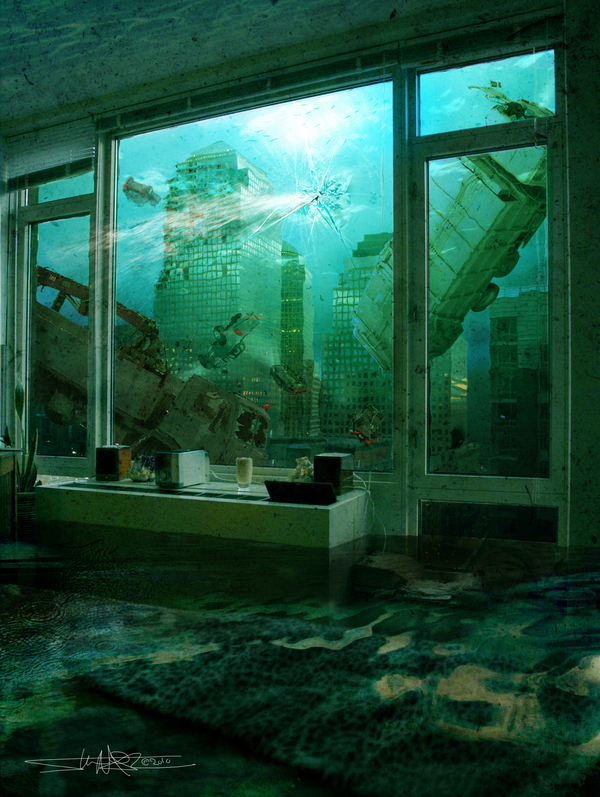 When I first wrote about Steve McGhee's incredible apocalyptic scenes, I didn't imagine he'd see it. But now that theMET has content that spreads far and wide, we'll often get the artist finding us and telling us how much they appreciate the write-up. A wonderful side benefit to this awesome job, if you ask me. Eugene followed up my post with If 2012 Really Happens…, a great title to Steve's amazing work. The way he portrays disaster is like nothing you've ever seen. Steve recently wrote to me to tell me about a new piece he just finished. Called She Will Swim With Angels, he shared a very personal story behind this piece. “Three weeks ago, my wife collapsed at our home in Woodstock, Ontario. Hearing the crash, I ran into the room where she had been typing and email just a few moments earlier. She was face down. I rolled her over as I thought she had just passed out. Her face was white and her lips were purple… she wasn't breathing. I checked for a pulse… nothing. My brain went into terror overdrive as I realized she was dying. I started heavy chest compressions with one had and dialed 911 with the other. I threw the phone down and yelled instructions into it. All the while our baby girl was crying for her mommy. It's 7:45am, Monday morning, and I have just stepped through the gates of Hell… and so has she. “Later in hospital, she would be diagnosed with Long QT Syndrome, a fairly rare heart condition and the cause of her “sudden cardiac death”. Two weeks later, after the coma, after the stroke, after she was put into a deep freeze to slow any damage to her brain, after cheating death by the narrowest of margins, she had surgery to correct the problem. A small, defibrillator implant now stands guard over her. She was in hospital for 3 weeks. “On the day of her surgery, one day before her release from hospital, her mother, who had been by her side 24-7 for more than three weeks, also collapsed in hospital and passed away of a massive heart attack. Recovering from her surgery, at her mom's funeral, she was stronger than anyone I have ever met, but it was also the saddest moment of my life. “This piece represents the despair and helplessness I felt while waiting in the hospital's “quiet room”, expecting an almost certain negative prognosis for my wife. She was not expected to survive the first night. She was unresponsive and on life support. Miraculously, she's back at home with me and our daughter and doing well, coping as best she can, with no signs of such a horrible event ever occurring. “She came as close as any human being can get to death and came back. She is a survivor.” Thanks, Steve, for sharing your story. My heart goes out to you and your wife. Steve McGhee