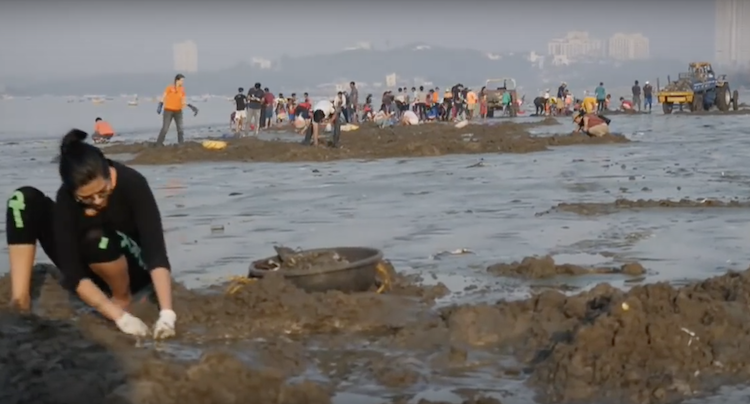 In an effort to save our seas, people from all walks of life are trying to tackle the current ocean pollution crisis. On top of innovative inventions like a self-cleaning device and a floating garbage can, one solution that continues to prove successful is the traditional beach clean-up, as demonstrated by a group of dedicated volunteers in Mumbai.

Since 2017, Sky Ocean Rescue—an organization that “aims to shine a spotlight on the issues affecting ocean health”—has led a campaign to clean a 2-mile stretch of Versova Beach, one of Mumbai's most notoriously littered sites. Every weekend, volunteers meet at the beach, where they meticulously fill bags with food packaging, soda bottles, and other refuse.

According to Afroz Shah, the environmental organizer behind Sky Ocean Rescue, the trash travels to the shore from nearby slums, where individuals aren't able to recycle. “There is no garbage pick up here,” he says. “Nobody tells them how to handle plastic.” In order to remedy this situation, Shah has spent time educating these residents and helping them learn proper plastic protocol.

Fortunately, his efforts are paying off. As of January 2018, 12,000 tons of litter had been collected from Versova Beach, and, every month, 22 tons of plastic from the slums is processed. “This is the hope for the future,” Shah said. “Plastic that is recycled won’t end up on my beach.”

All images via Sky Ocean Rescue.