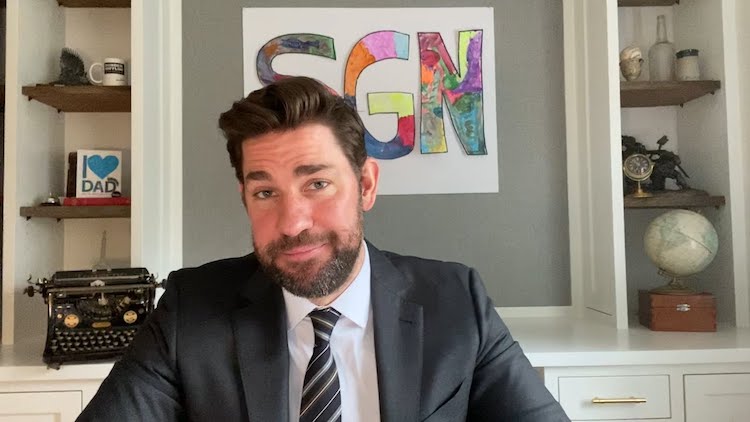 If you’re feeling overwhelmed by the current news cycle on COVID-19, you’re not alone. We could all use some uplifting content right now. That’s why The Office star John Krasinski (who played Jim) decided to create his own news channel on YouTube, aptly called Some Good News (SGN). Dedicated to featuring nothing but positive stories, Krasinski reminds us that “no matter how tough life can get, there’s always good in the world.”

Filmed from his home office while self-isolating, Krasinski’s DIY newsroom was created with the help of his two daughters, who artistically designed the SGN logo. Krasinski even wears a suit (at least on his top half) and hilariously adopts typical news anchor mannerisms, such as constantly shuffling stacks of paper.

To find his stories, Krasinski took to Twitter last week, calling for his followers to share #SomeGoodNews. The first SGN episode broadcast the highlights from his Twitter replies, including the global appreciation of healthcare workers, stories of kindness and love among communities and families, as well as a personal success story—The Office‘s 15th anniversary. For the latter feature, Krasinski chatted with Steve Carell (who played Michael Scott) via video call, and they reflected on their favorite moments from the show.

John Krasinski's DIY news channel, Some Good News, is dedicated to featuring nothing but positive stories.