Sony’s Party-Shot Can Aim and Snap Your Smiley Friends 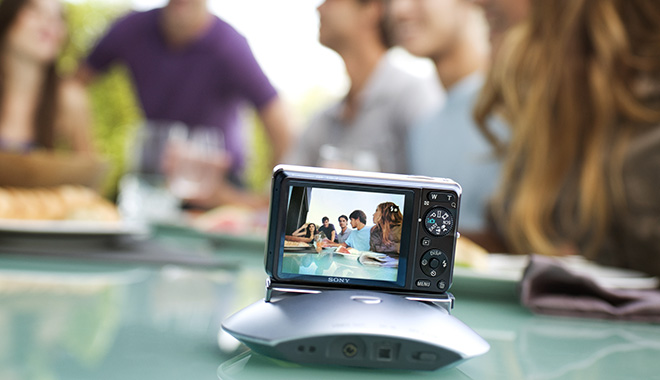 Sony just announced news of Party-shot – an innovative camera dock that pans 360 degrees and tilts 24 degrees. The IPT-DS1 Party-shot ($150; September 2009) is compatible with the new DSC-WX1 and DSC-TX1 Cyber-shot camera. These cameras have Face Detection and Smile Shutter that automatically take pics of your friends drunken, but smiley, faces. They also have Sony's “Sweep Panorama” feature that allows for super-wide panorama shots. The camera takes up to 100 pictures as the user swings it from one side of the panorama to another and automatically matches and stiches the images together so the result is a very wide picture. Sony evens goes so far as saying that “Intelligent composition uses the rule of thirds to compose great shots and motion detection seeks out movement to take the photo at the right moment.” Yowza. This baby's going to sit there quietly and take pictures of party peeps at the exact right moment? But what if my moment is when Alcoholic Bob is yacking over the toilet? When the Party Shot and supported cameras go on sale next month they will be pricey: As much as $540 for the combination. Will this catch on? What do you think? Via: PC World, Engadget