Stained Glass Window With a Piece of the Moon 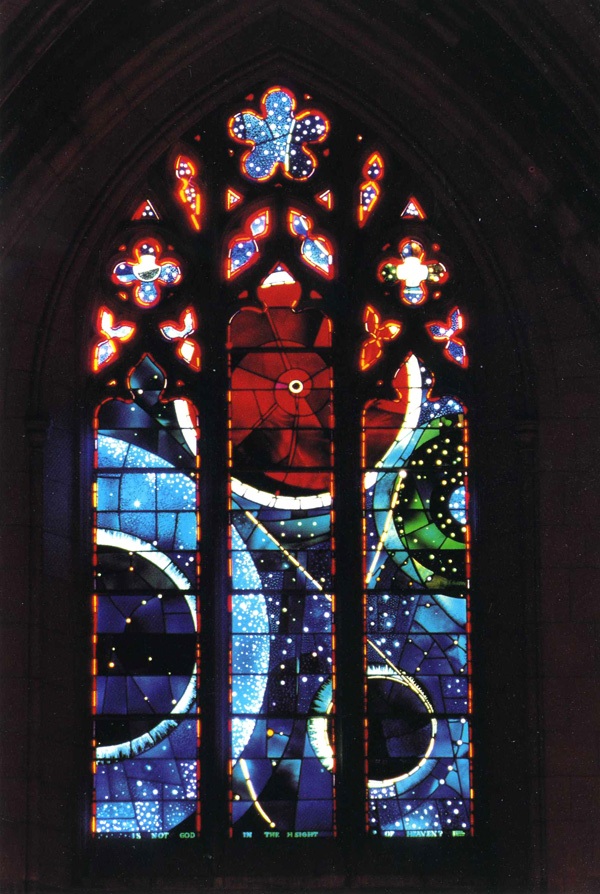 Next time you're touring Washington D.C., drop by the Washington National Cathedral to a see a stained glass window like no other. If you'll believe it, there's actually a tiny piece of the moon inside of it. Where? In the center of the large red orb.

Called the Space Window, it was designed by artist Rodney Winfield and shows orange, red and white stars and planets on a deep blue and green field. The window was dedicated in the presence of Neil Armstrong who, with fellow Apollo 11 astronauts Buzz Aldrin and Michael Collins presented a moon rock to the Cathedral on July 21, 1974–the fifth anniversary of the day that Armstrong took that historic first step on the moon. Encased in an air-tight, nitrogen-filled capsule in the window, the moon rock weighs only 7.19 grams but is believed to be 3.6 billion-years-old. It took four years of work and planning to make this incredible feat of art and science a reality.

Here's how the National Cathedral's website describes it, “Today, this Space Window–fully titled the ‘Scientists and Technicians Window (Space)'–is part of the Cathedral's iconography, telling stories that have shaped the nation's identity. It is just one example of what makes the Cathedral a historic landmark, symbolizing the role of faith in America.”

The public memorial for astronaut Neil Armstrong is being held at the National Cathedral today, September 13, as NASA celebrates the life of the first man to walk on the moon.