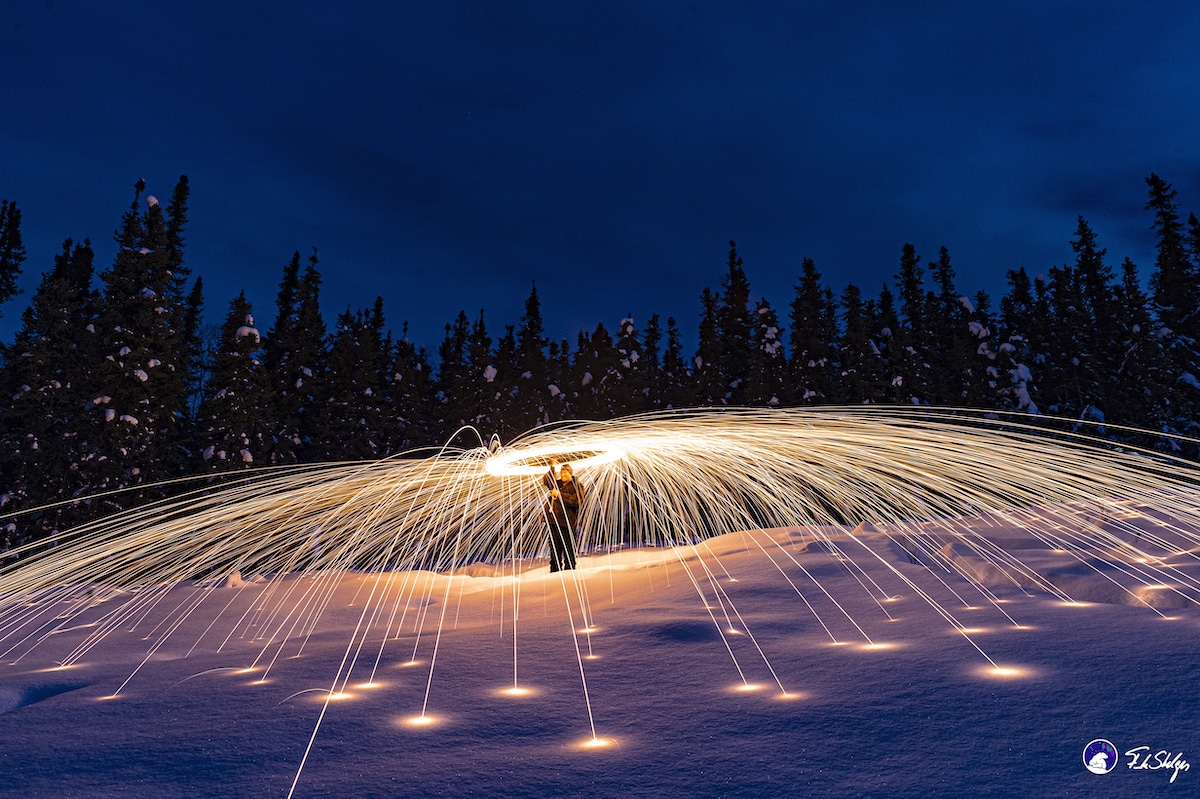 German photographer Frank Stelges spent 10 years traveling the world before settling down in Alaska. Once there, he opened a photography school with his wife, where they focus on wildlife, night photography, and capturing the Aurora Borealis. With one recent group, an unfortunate case of not much action in the sky meant that he was able to experiment with something new and unexpected. This led to a pairing of steel wool and drone photography that made for a memorable series of images.

Whenever Stelges has a group, he always has a backup plan just in case the Northern Lights aren't very visible. This usually involves light painting, as it allows the group to experiment with the techniques they'd learned in the classroom. On this particular evening, Stelges' friend, photographer Tobias Gelston, brought along some steel wool and so they let sparks fly.

After studying the regular photographs they'd been shooting, Stelges was struck by inspiration. “Looking at them, I said that it must look probably pretty cool from the sky—we both looked up and said simultaneously: ‘Drone!,'” he shares with My Modern Met. “So I got my DJI Mavic Pro out and adjusted some settings and then I just tried it out.” 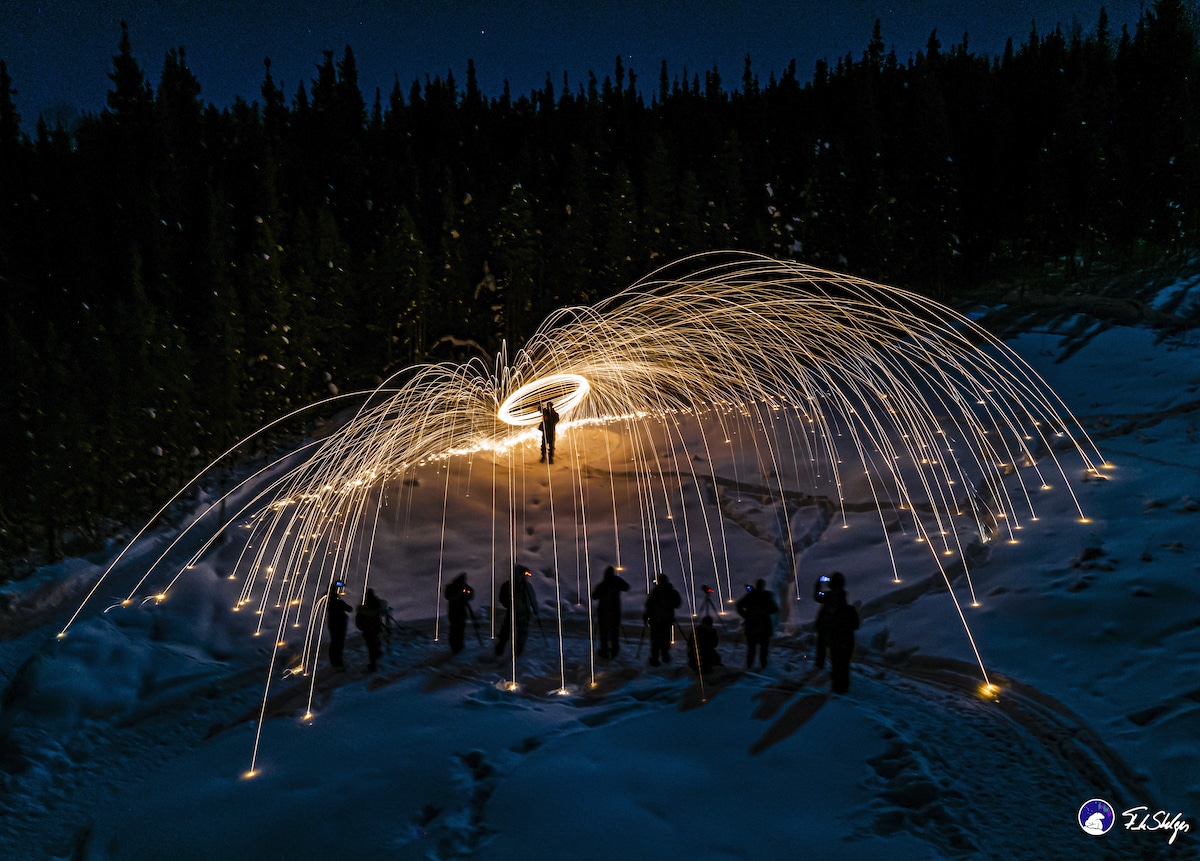 The impromptu shoot made for some memorable imagery, as the drone was able to capture a unique perspective of the steel wool. From above, the person holding the steel wool appears surrounded by a halo of fire, as rays of light shoot in every direction. The high quality of the photographs is astounding, particularly considering the technical difficulties that Stelges faced.

“You need a long exposure to capture the flying sparks of the steel wool as nice long lines, which is normally a situation where you would use a stable tripod so that the camera doesn’t move during the time of your exposure,” Stelges explains. “In this case, your camera is a moving, flying subject 60 feet up in the air. It’s really dark so you don’t see the drone and have no idea what it is doing up there.”

Luckily, after two or three tries, Stelges was able to adjust the settings so that he could get the best possible photographs. It was a well-earned victory for the photographer, who tries to teach his students how much they're able to do in-camera without having to turn to Photoshop. By pushing himself to face the challenges of this experiment, he hopes that other photographers will be encouraged to go out and shake up their own creative processes.

After spending some time shooting steel wool photographs from the ground, Frank Stelges got an idea. 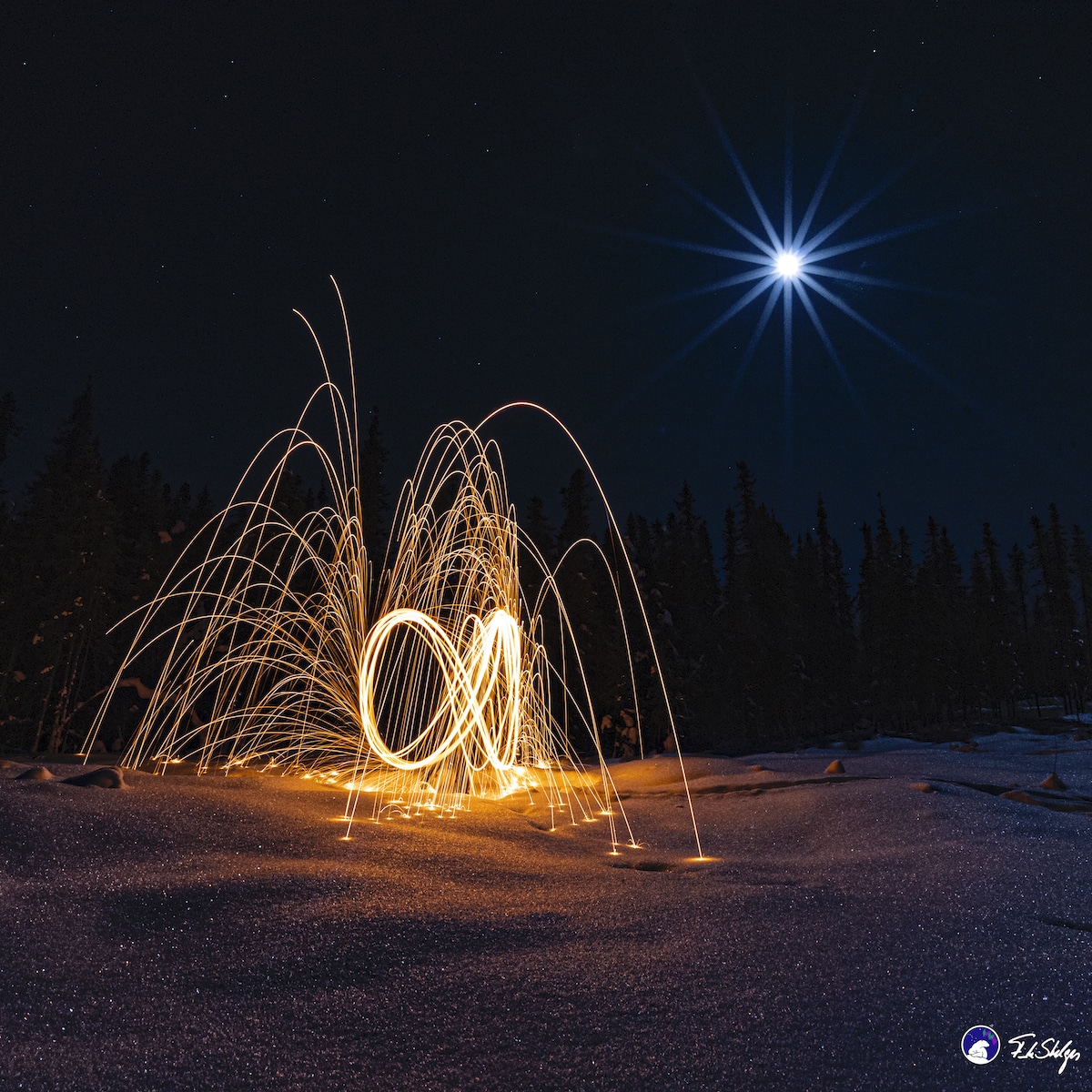 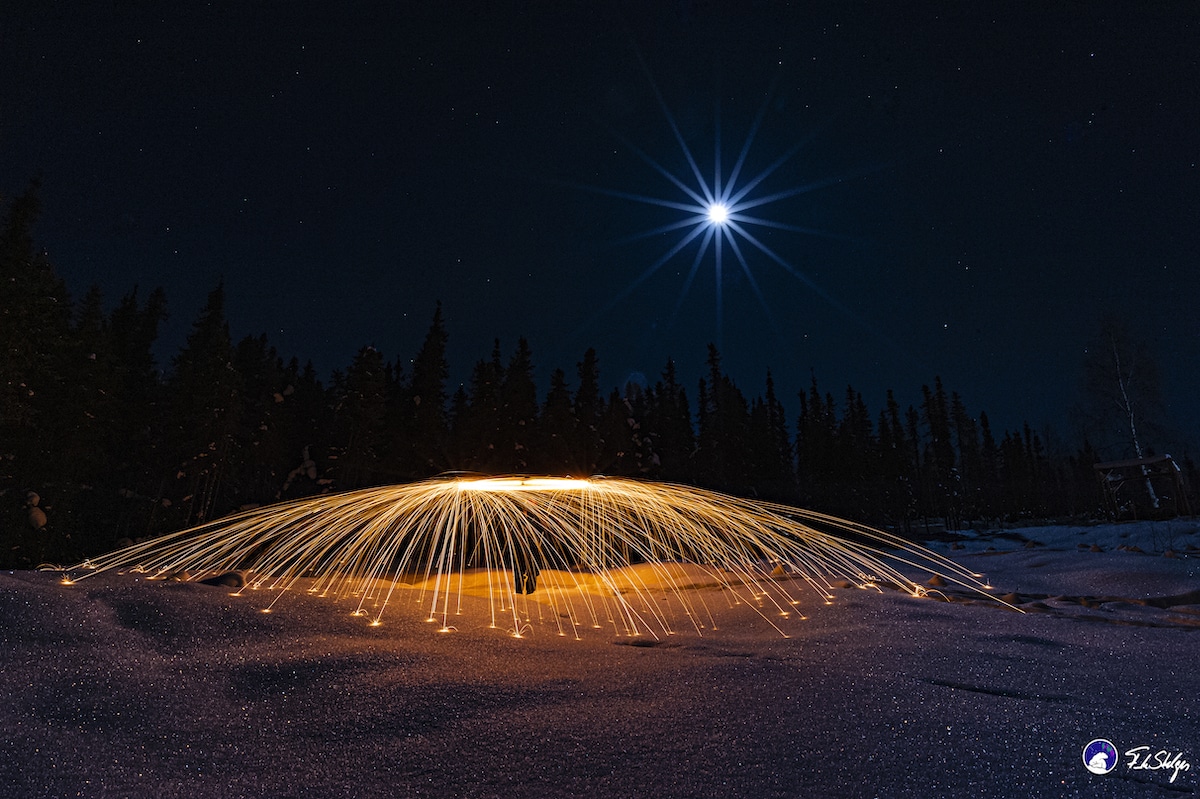 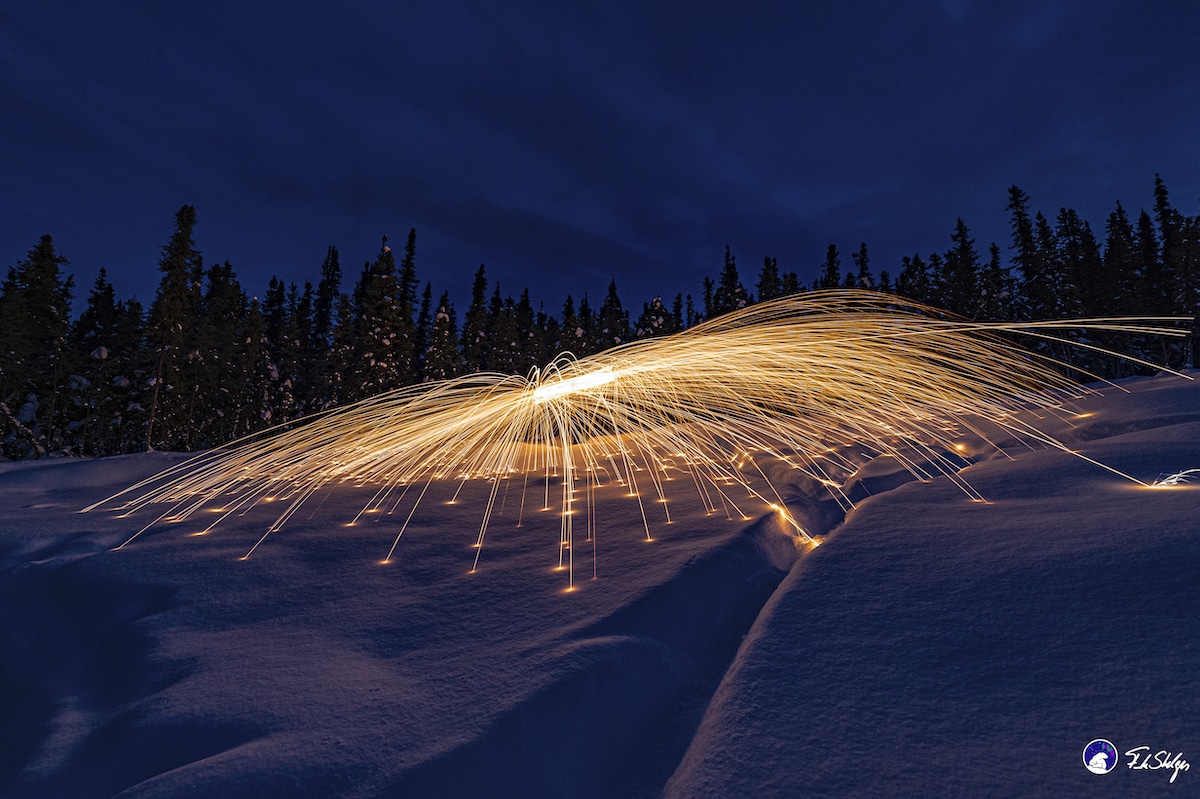 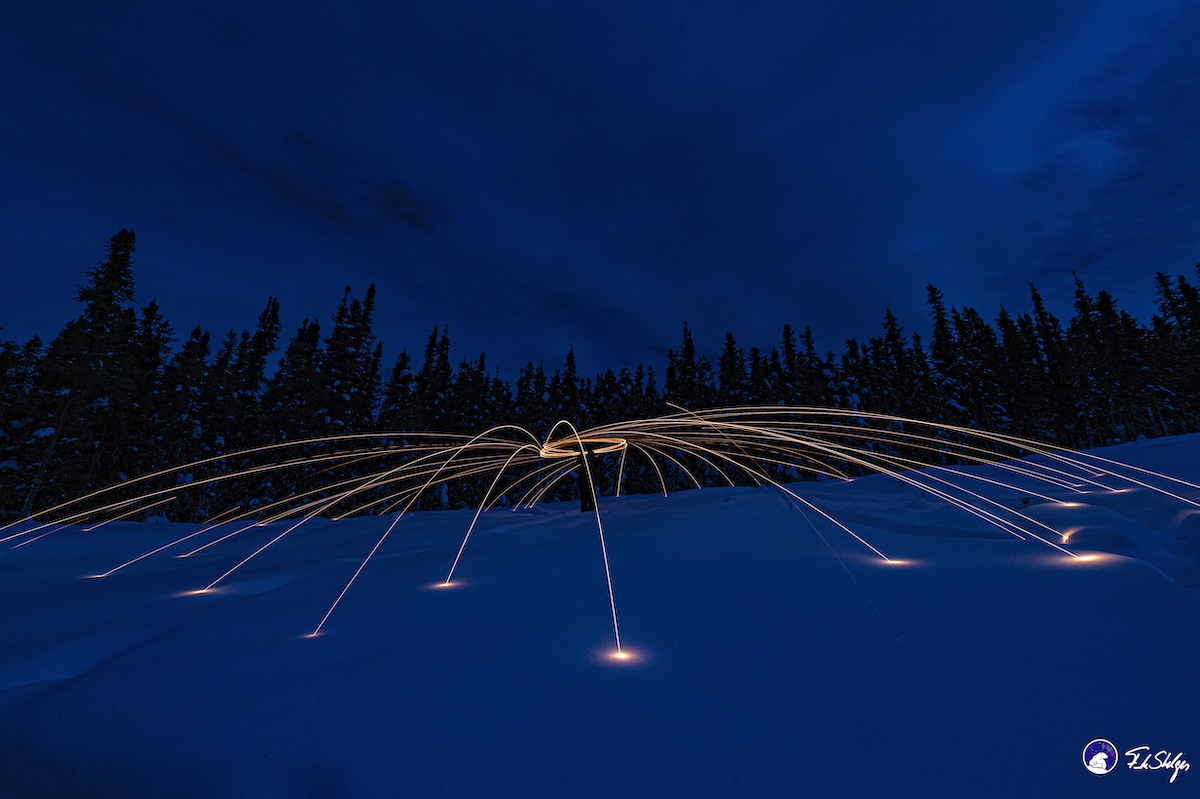 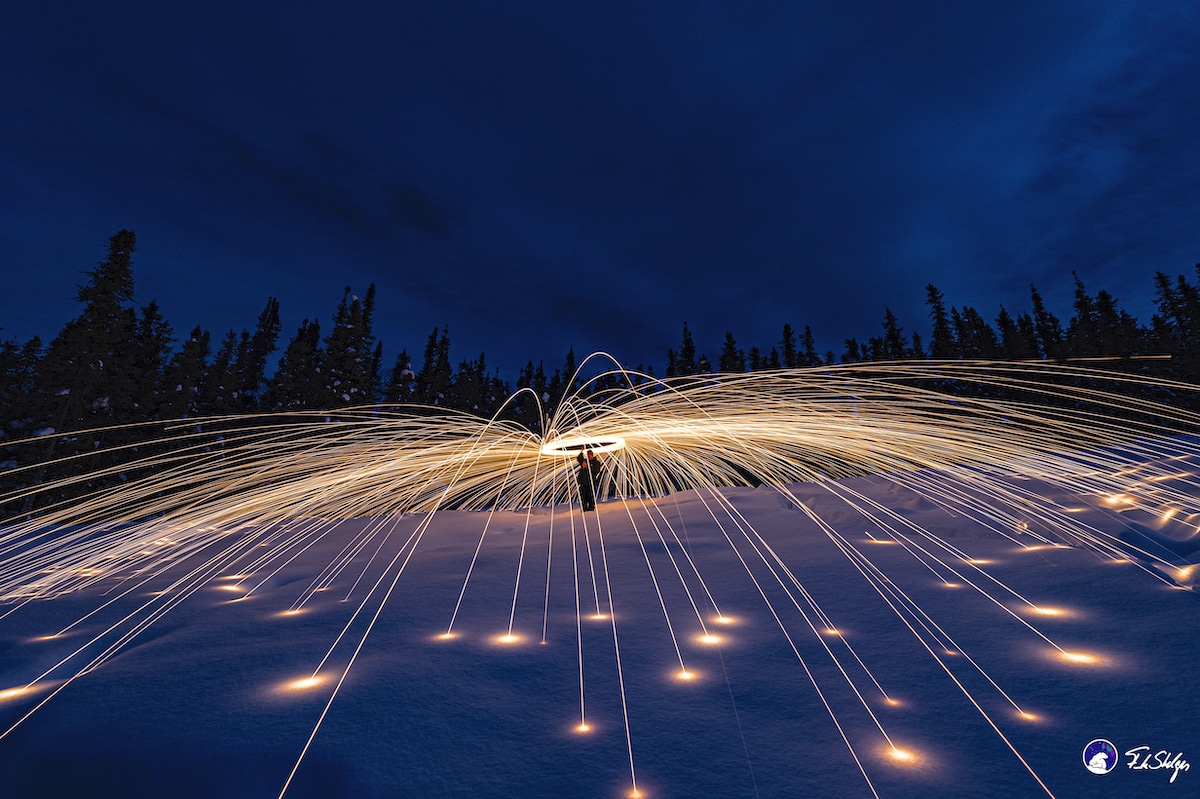 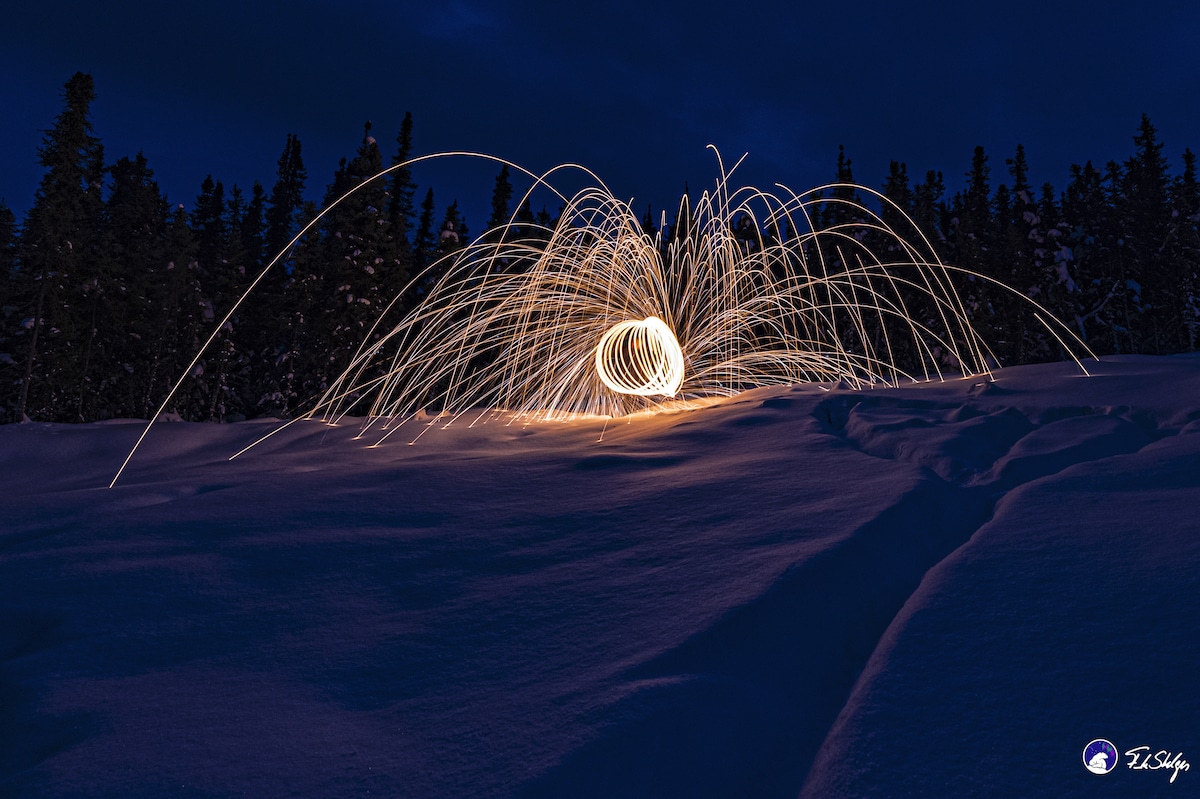 Using his DJI Mavic Pro, the Alaska-based photographer took to the sky for a drone's-eye view of the fire and sparks. 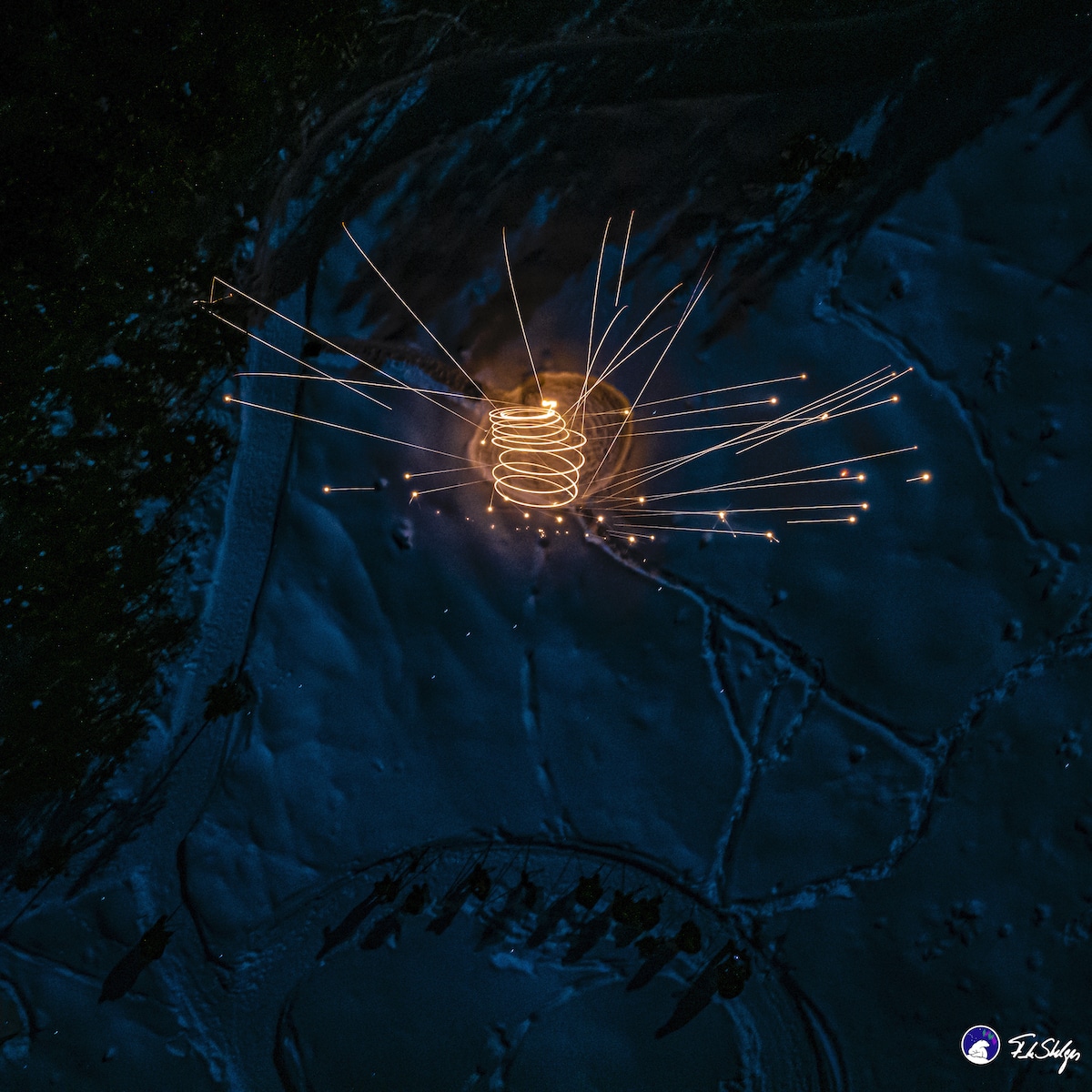 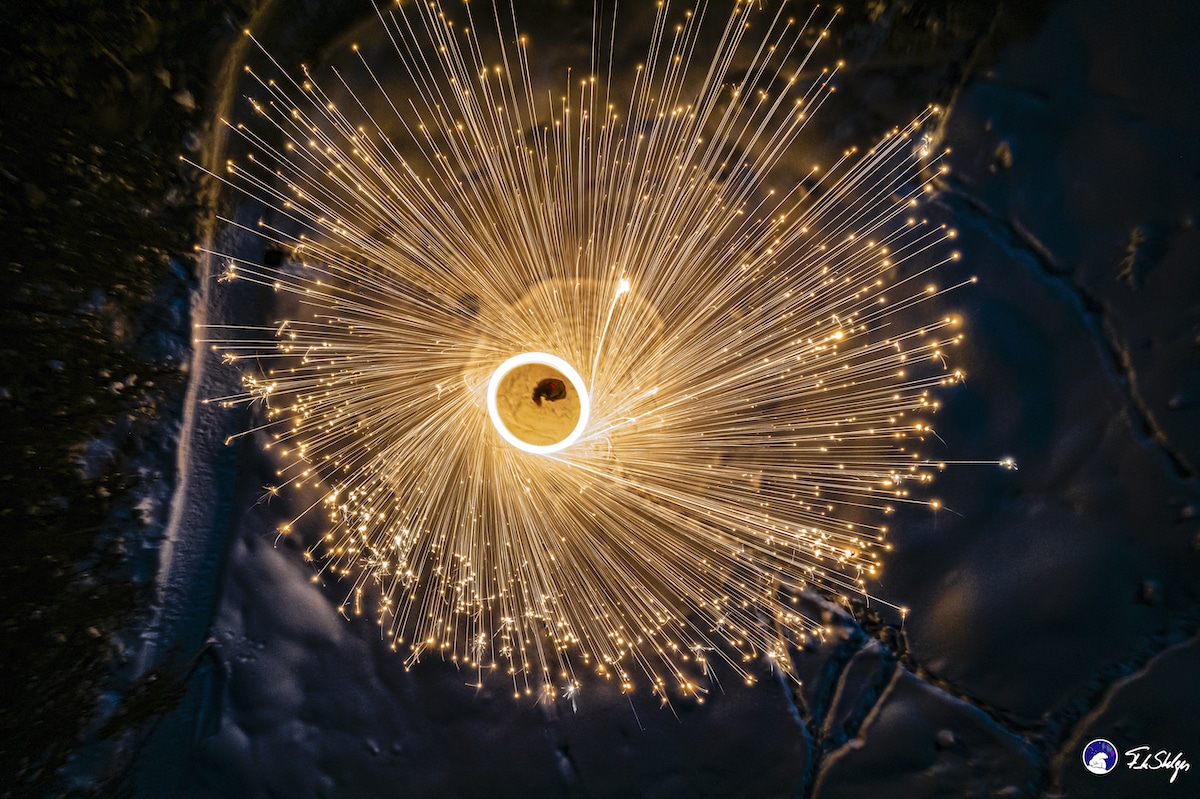 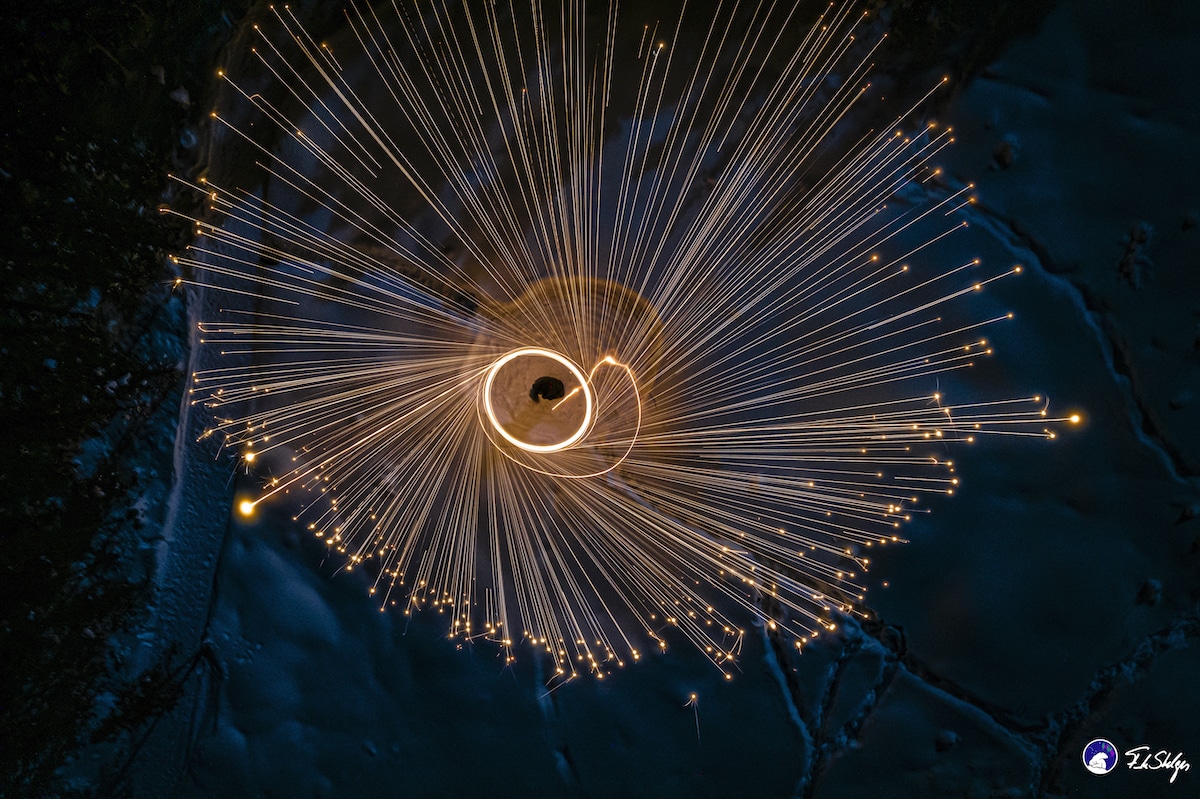 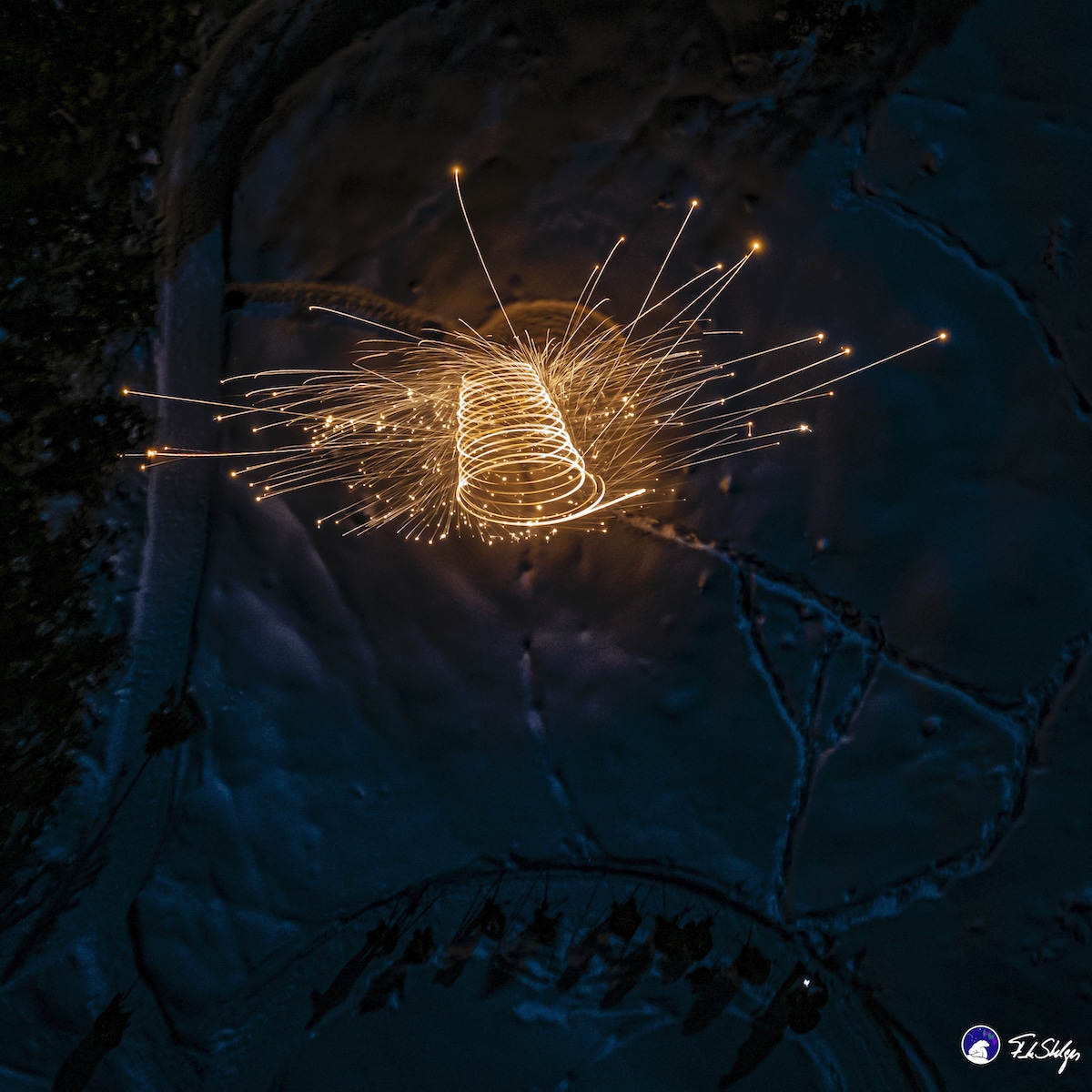 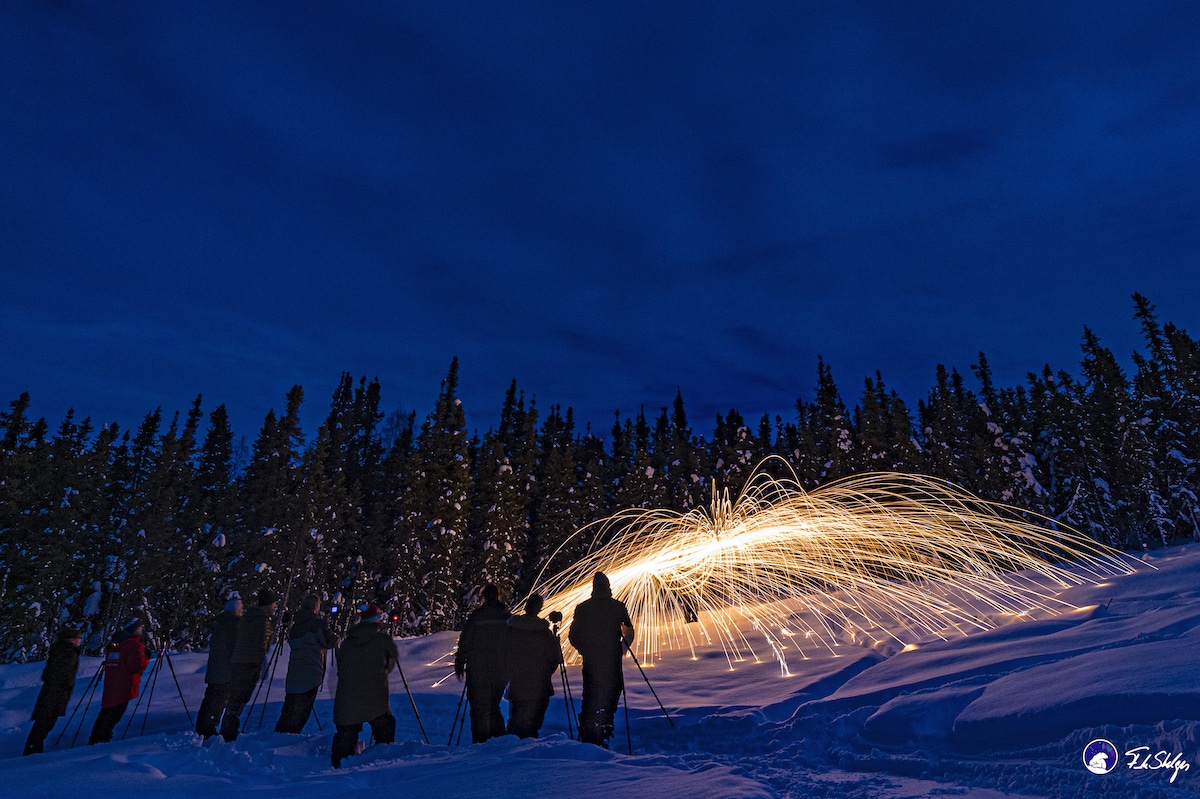 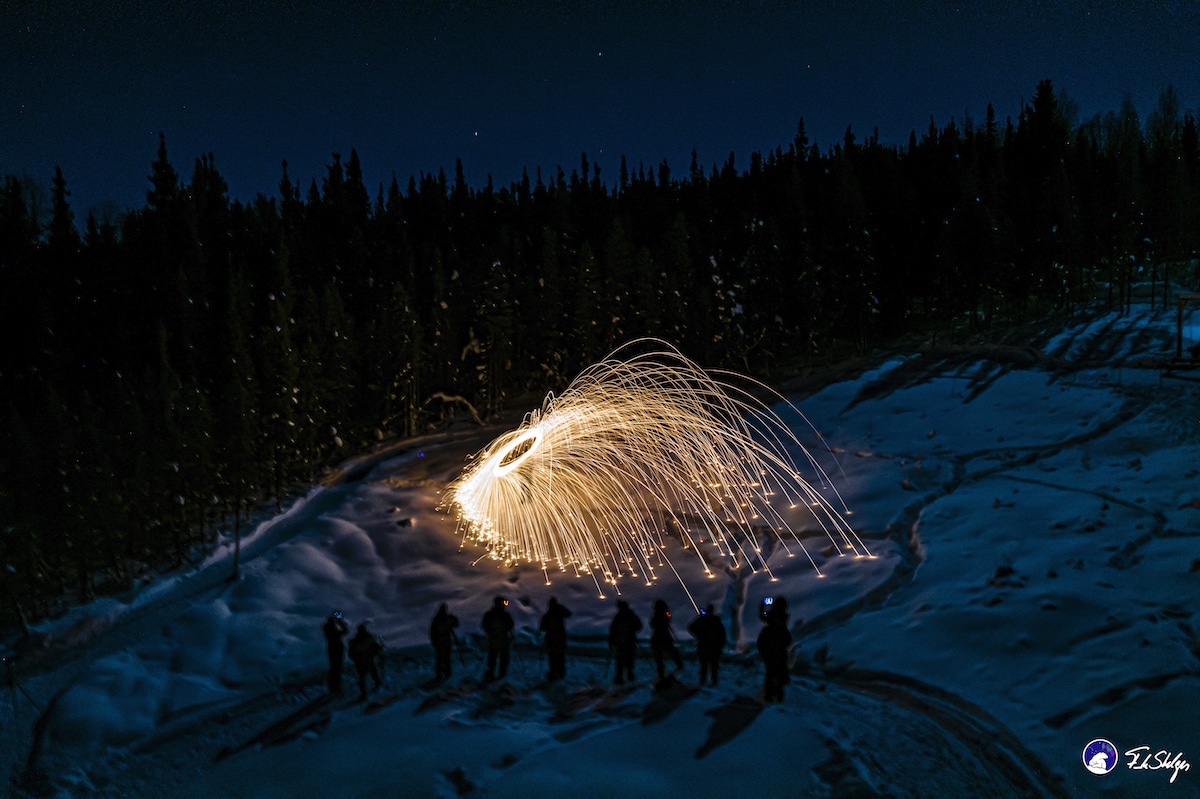 Love to see sparks fly? Share
Like My Modern Met on Facebook
Get Our Weekly Newsletter
Become a
My Modern Met Member
As a member, you'll join us in our effort to support the arts.
Become a Member
Explore member benefits