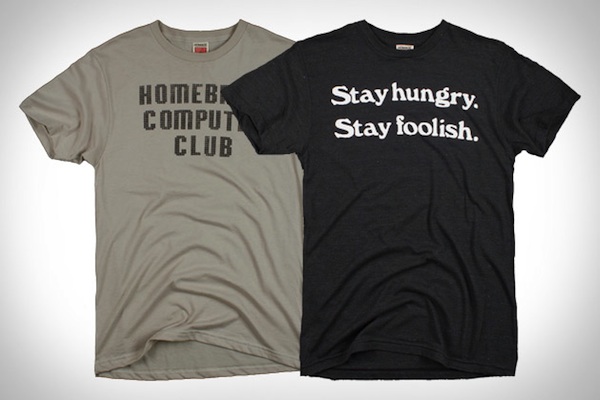 Uncrate just tipped us off to two new t-shirts by Homage company that honor the late Steve Jobs. While one says “Homebrew Computer Club,” in reference to the 70s-80s Silicon Valley computer club Jobs and Steve Wozniak belonged to, the other simply says, “Stay hungry. Stay foolish.” 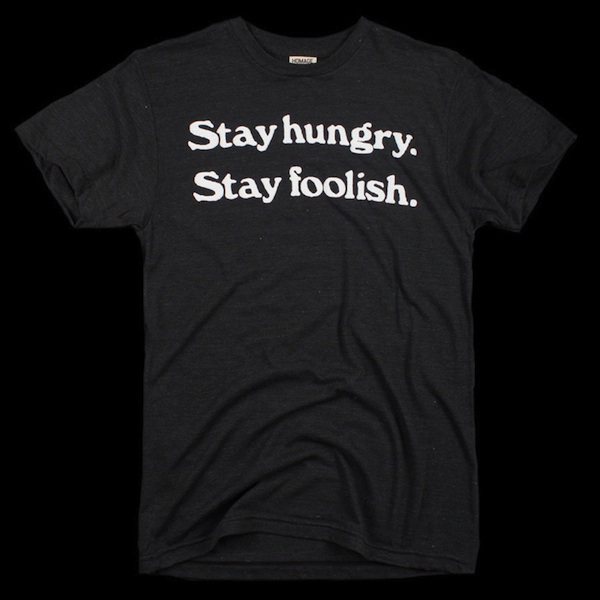 For those who watched Jobs' 2005 Standford commencement speech, you'll remember that those were the last two lines he ended it with.

Here's part of the transcript:

“When I was young, there was an amazing publication called The Whole Earth Catalog, which was one of the bibles of my generation. It was created by a fellow named Stewart Brand not far from here in Menlo Park, and he brought it to life with his poetic touch. This was in the late 1960's, before personal computers and desktop publishing, so it was all made with typewriters, scissors, and polaroid cameras. It was sort of like Google in paperback form, 35 years before Google came along: it was idealistic, and overflowing with neat tools and great notions.

“Stewart and his team put out several issues of The Whole Earth Catalog, and then when it had run its course, they put out a final issue. It was the mid-1970s, and I was your age. On the back cover of their final issue was a photograph of an early morning country road, the kind you might find yourself hitchhiking on if you were so adventurous. Beneath it were the words: ‘Stay Hungry. Stay Foolish.' It was their farewell message as they signed off. Stay Hungry. Stay Foolish. And I have always wished that for myself. And now, as you graduate to begin anew, I wish that for you.

Love that 100% of this shirt's proceeds benefit the Pancreatic Cancer Action Network, a nationwide network of people dedicated to working together to advance research, support patients and create hope for those affected by pancreatic cancer.