Story Behind the Kissing Couple by Pop Photo 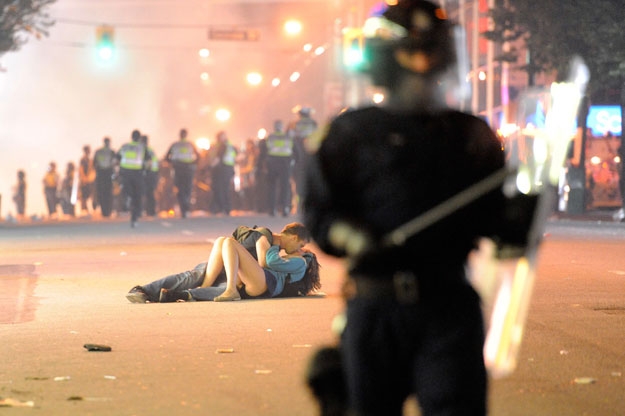 Recently, the Internet went crazy over a picture of a couple kissing during the Vancouver riots. Was it real or was it staged? We all wanted to know…

Pop Photo just released a lengthy interview with the photographer who took the shot, Richard Lam.

When the Vancouver Canucks lost in game 7 of the Stanley Cup Finals, it sent their home city into tumult. Riots broke out, leaving buildings destroyed, cars burned and people injured. But, out of the chaos, photojournalist Rich Lam was able to capture a truly unique image, one that has blown up far beyond what this veteran shooter could have imagined, on the web and in the news.

“I was shooting the hockey game for Getty Images.” Lam told Pop Photo. “My background is a wire photographer working with the Canadian Press. I started working with Getty last season. I shot the game and then I shot the post-game press conference. As I was packing up my gear, they had the TV in the press room working and I saw that it wasn't slowing down in terms of the riot. I found out a colleague of mine — part of the Getty crew — Bruce Bennett was out on the street already and I just turned to another Getty photographer, Elsa, and said maybe we should go and help out.”

Mashable reports that the couple in the photo is 29-year-old Scott Jones from Perth, Australia, and Alexandra Thomas, from Vancouver.

Jones's father, Brett, told The Star: “She had actually been injured… She had been knocked down by a shield… He lay down next to her to comfort her. She was crying and he just kissed her to calm her down.”

What a happy ending. Love knowing that this beautiful photo is real.