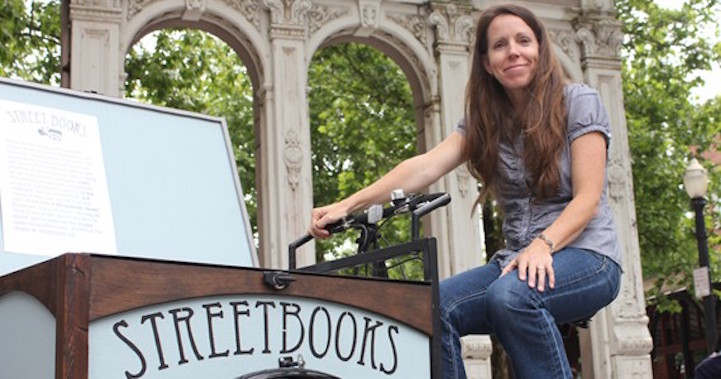 To you and me, libraries are the place we go if the bookstore doesn't have a certain book we're looking for, or perhaps the place we go when we need to wait out the rain. For many in the homeless community, however, libraries are institutions of luxury. Libraries require an ID and a home address in order for a patron to be eligible for a library card, leaving those living on the streets out of luck. Laura Moulton, an artist and adjunct professor of Creative Nonfiction in Portland, Oregon, thought that this was just wrong. Everyone should have the right to read, no matter if you have a home address or not. With some grant help from Kickstarter, the Regional Arts and Culture Council, and the Awesome Foundation, Moulton's non-profit bicycle-powered street library called Street Books took to the Portland pavement in 2011.

Every week, Moulton and a handful of other volunteer “Street Librarians” ride their book-filled bicycles to designated spots around town, where they set up shop, though no money is exchanged in the process. “We keep the same time and same place each week so [patrons] can easily return the books,” Moulton says in a documentary by NationSwell. Patrons, most of them who are homeless or somehow on the margins of the mainstream Portland community, are told that they may keep the book for as long as necessary. If, by chance, their paths don't ever cross Street Books again, patrons are asked to pass the book onto others, so as to create a never-ending library of giving. When asked why she chose to provide books rather than money or clothing, Moulton explains, “Because there's a freedom that comes from kind conversations about books.” She's building a bridge via literature and providing the chance for those who struggle from homelessness to think about something else for a moment.

With over 5,000 patrons, Street Books is still growing. “Who wouldn't want to be a wise man?” says patron William. Another woman, Heather, says in a documentary featured on the Street Books website, “I value books like gold. I read three in my very first week!” She stresses an important takeaway: “Homeless people are smart. We deserve to be able to read. It's a basic human right.” 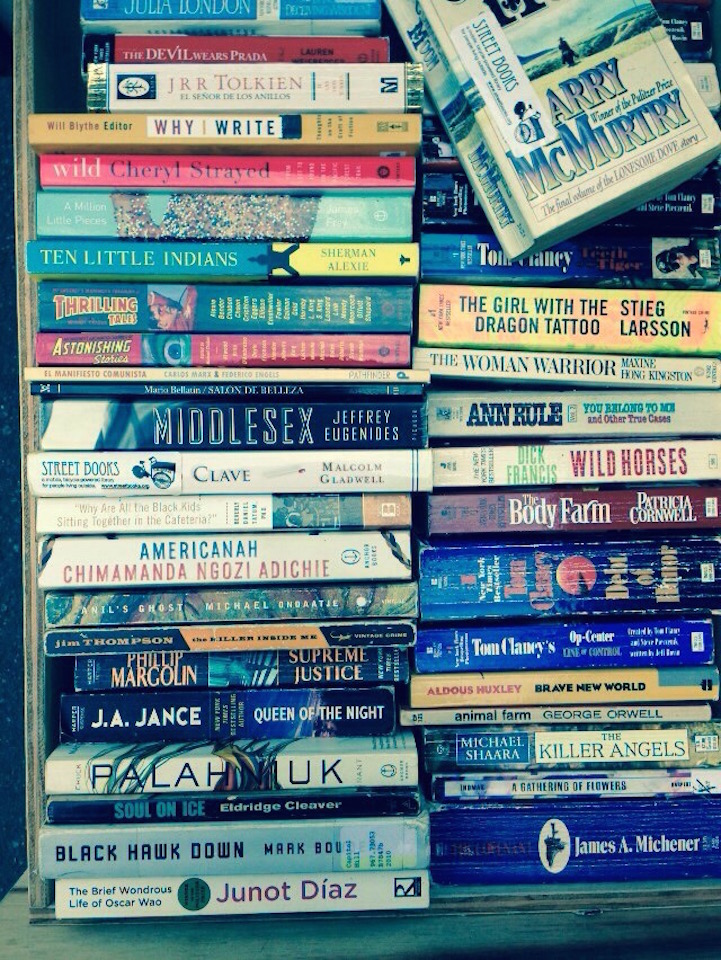 Meet a few of the Street Books patrons as they pose with their favorite books: 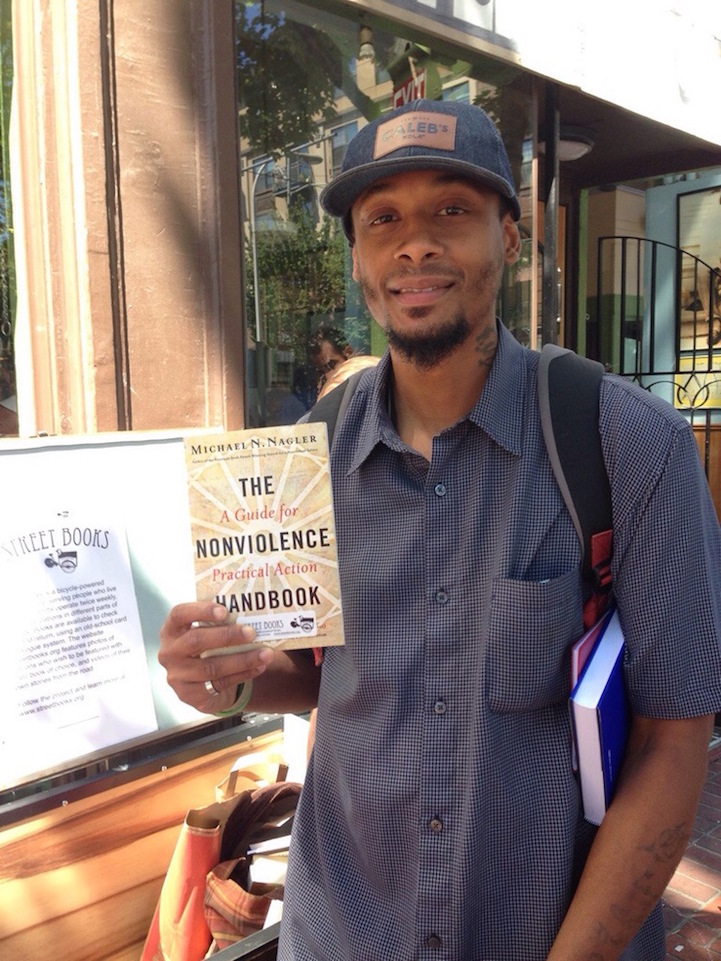 Nashan is ready to change the world—one book at a time. 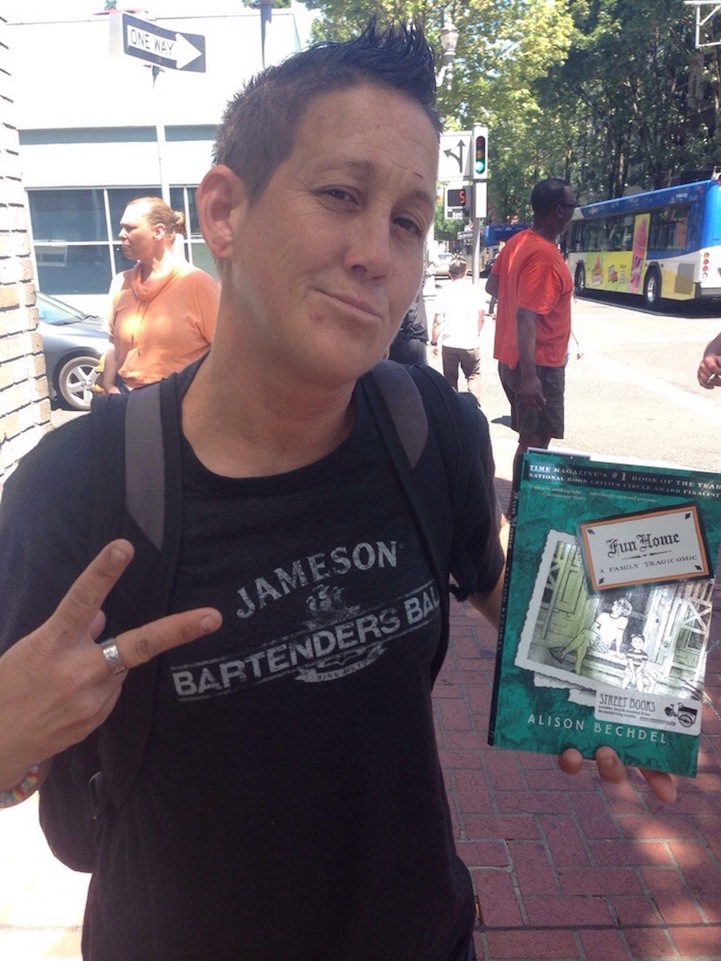 This is the first graphic novel Dana's read and she loves it! 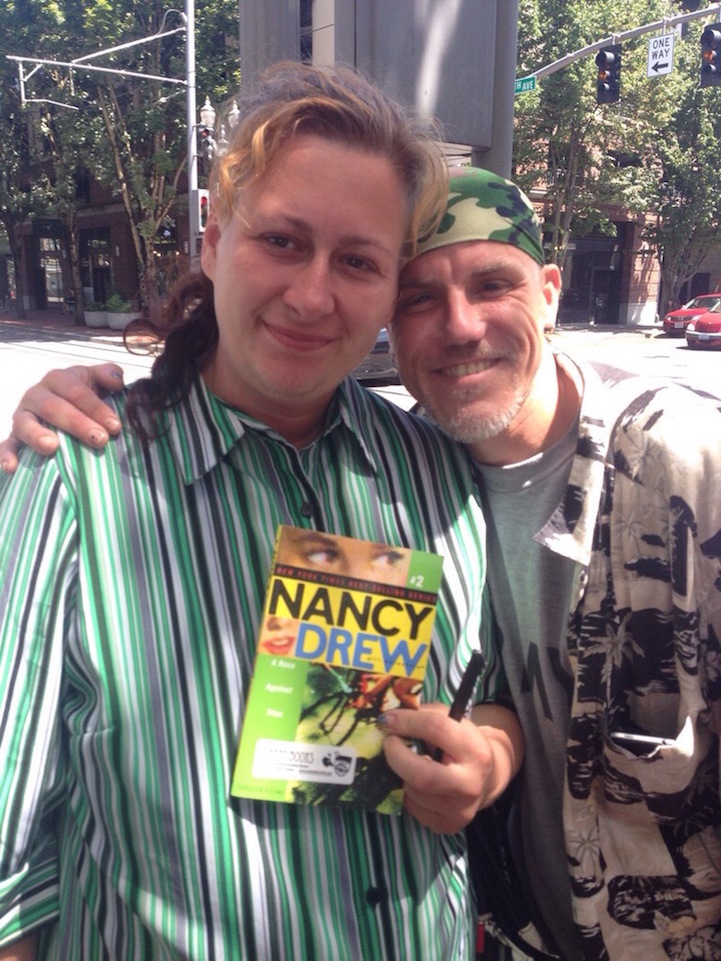 Dominick & Julianne are fans of this super sleuth. No shame. 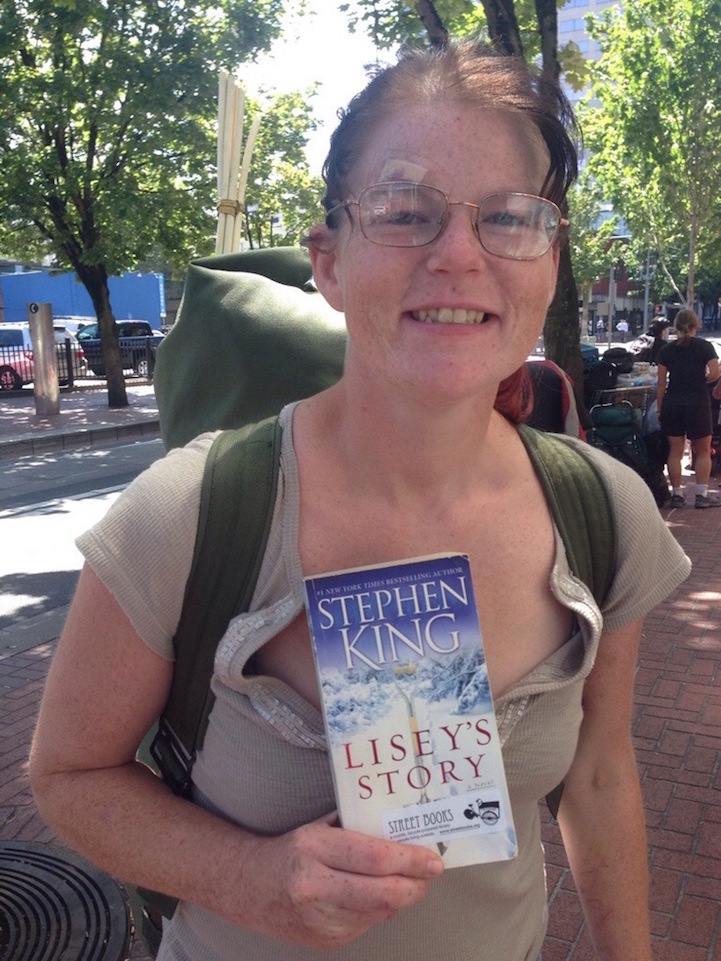 Becky is craving something suspenseful. 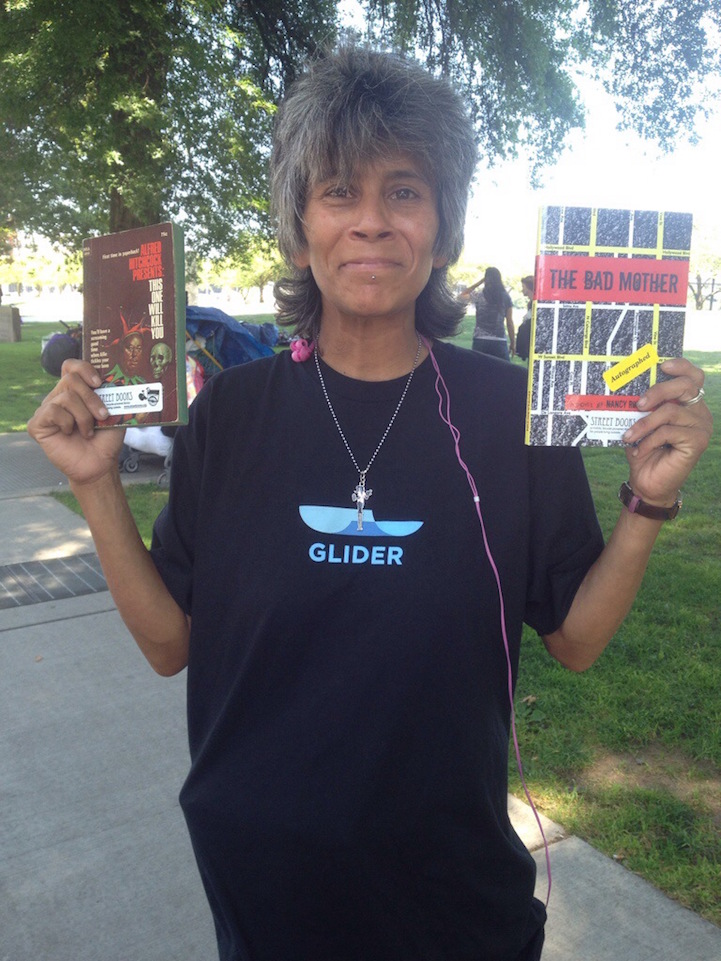 Laura picked two for the road. 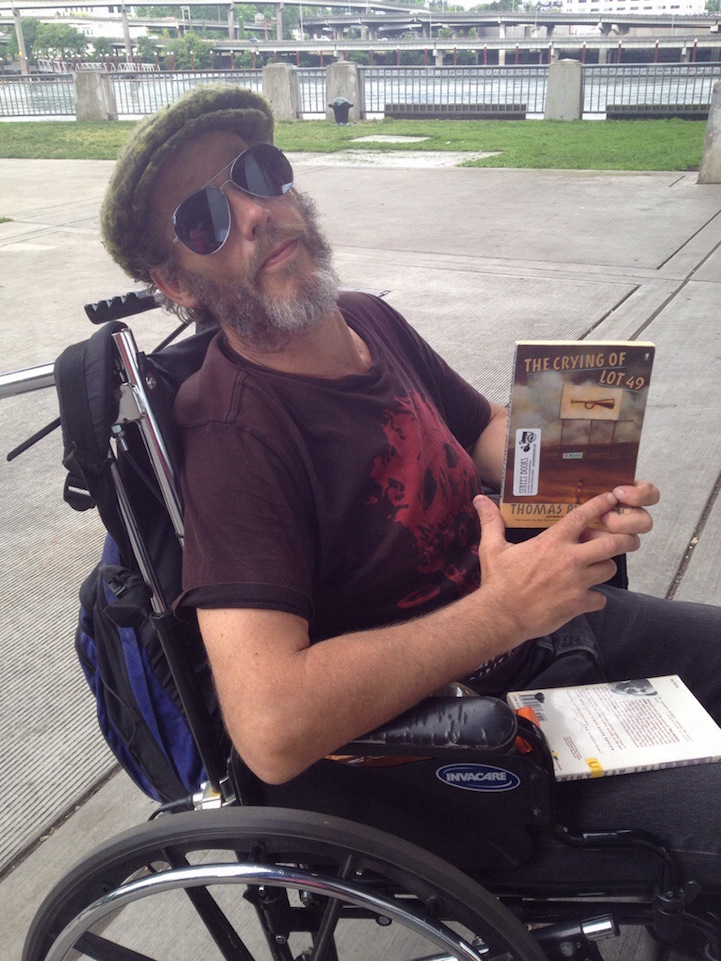 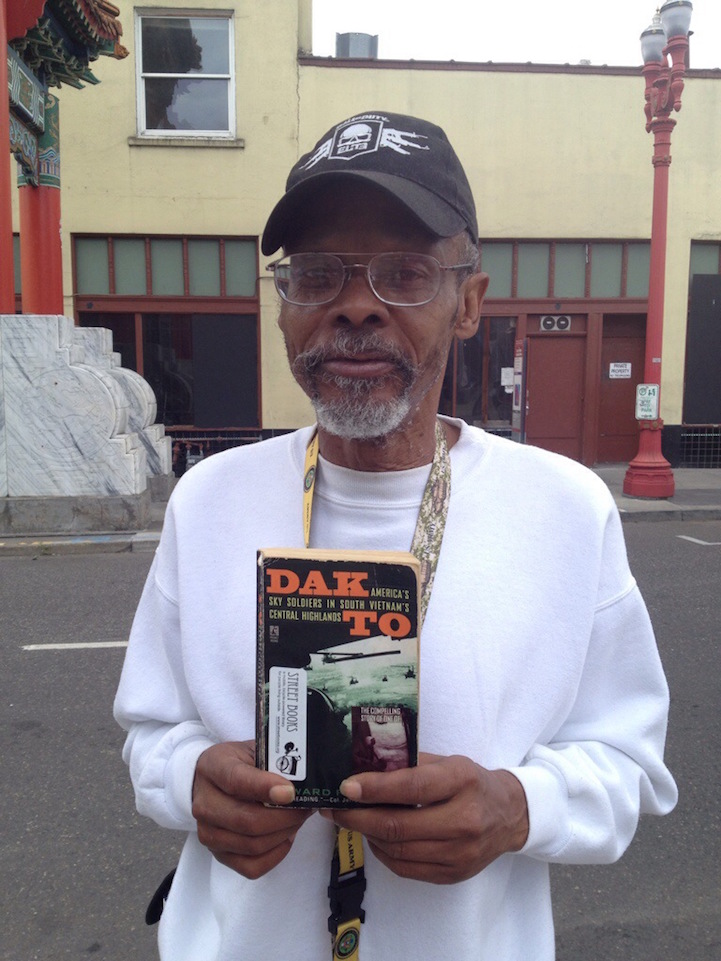 All images via Street Books.