When you’re a college freshman, heading off to school is exciting. You get to define who you are and have a whole new group of people to get to know. But that’s not the case for gold medal Olympian Sunisa (Suni) Lee. She is attending Auburn University in Alabama and is the most well-known person to enter the new crop of students. But if the 18-year-old gymnast was apprehensive about being so famous, she doesn’t need to worry; her fellow students have welcomed her with a standing ovation.

The warm welcome came after Lee arrived at Auburn at the beginning of August. On Sunday, August 15, 2021, she officially became an Auburn Tiger during the university’s Convocation Ceremony—an annual event to welcome its incoming freshman. But the ceremony also doubled as a spontaneous celebration of Lee’s gymnastic achievements at the Tokyo games. (She earned the gold medal in the all-around competition, helped Team USA win silver, and was awarded a bronze medal on the uneven bars.)

During the event, the school makes mention of how special this class is; thanks to Lee, they’ve already won gold. At that point, the students start cheering for her and chanting “USA! USA!” while shaking their Auburn orange pom-poms. Lee, projected on the jumbotron, looks surprised and honored and waves to her classmates. She's now part of Auburn's gymnastics team and will be the first Olympic all-around champion to compete in the NCAA.

Lee is gracious about all the attention but is ultimately looking forward to blending in and enjoying the college experience. “A lot of people here know me,” she told her school. “I just got here so of course people are going to be excited. Once it dies down, I feel like it will be a little better and I'll be able to do stuff and be able to go somewhere without being called out. I'm really happy to be here.”

Not only is her gymnastics team excited for her arrival, but the rest of the college freshman class is, too. She received a standing ovation at the Convocation Ceremony. 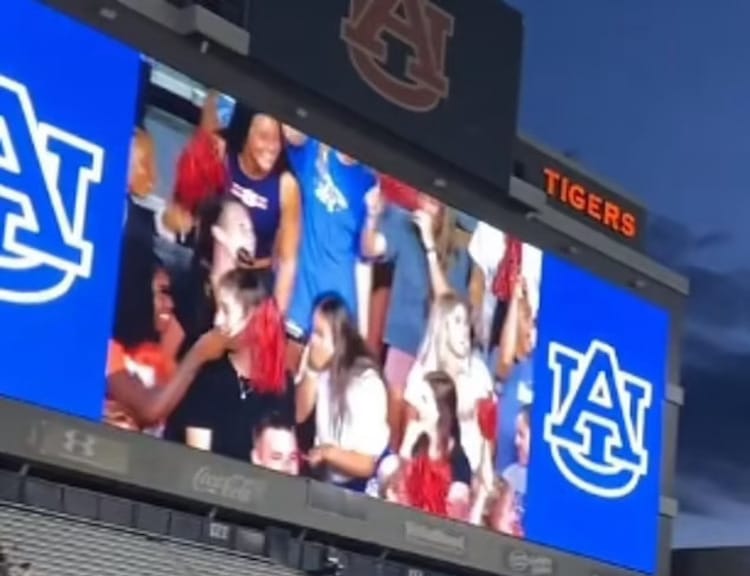