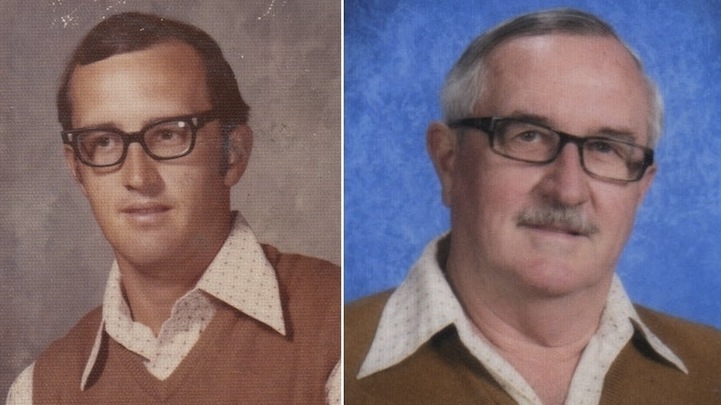 On school picture day, everyone always wants to look their best. For picture day in 1973, Texas elementary school gym teacher Dale Irby donned a brown sweater and wide collared shirt to have his portrait taken and thought nothing of it until the following year when he accidentally wore the same outfit. When he realized his mistake, there was nothing he could do but chuckle at the fashion faux pas.

Irby said, “I was so embarrassed when I got the school pictures back that second year and realized I had worn the very same thing as the first year.” In response to the error, his wife Cathy made things interesting by daring Irby to wear the same thing for a third year in a row. Irby accepted the challenge and, after five years, thought “why stop.” With a great sense of humor, Irby continued to don the same shirt and sweater for 40 years until he retired at the end of this past school year.

Upon his retirement, the hilarious tradition has gone viral. Each year, everyone looked forward to Irby's arrival in the legendary ensemble. Throughout this series of 40 photographs, Irby's hair, moustache, and glasses evolve with the times, but his clothing stays the same. There's something great to be said about being able to laugh at your own mistakes. Happy to finally retire the outfit, Irby said, “I doubt that I'll wear it again, even in a dare.”