The Most Expensive Privately Funded Construction Project in U.S. History Scales Back 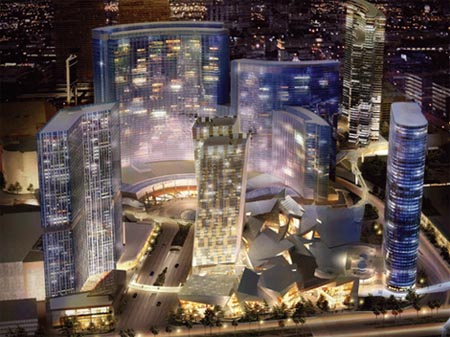 We knew Las Vegas would be hit. The $11 billion construction project, CityCenter Las Vegas, is feeling the pain of this economic slump. Good news is that it's still set to open at the end of 2009, according to developer CityCenter Holdings, a joint venture between casino operator MGM Mirage and a unit of investor Dubai World. Just to give you a quick rundown of what's still in store: CityCenter will feature Aria, a 61-story, 4,000-room gaming resort; three luxury non-gaming hotels including Las Vegas' first Mandarin Oriental, The Harmon Hotel & Spa and Vdara Hotel; Veer Towers, the development's only strictly residential buildings; approximately 2,400 condominium residences; and Crystals, a 500,000-square-foot retail and entertainment district. Cutbacks are being made on the construction of the residential condominium component of the Harmon. In addition, the 400-room Harmon Hotel & Spa has being deferred for one year, postponing the opening of the hotel to late 2010. Source: Yahoo News