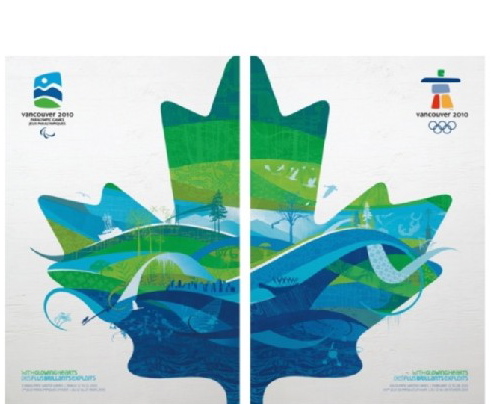 The official poster of the 2010 Olympics has just been released. The maple leaf will be the face of the official games because it is one of Canada's most widely recognized symbols. Instead of the standard rustic red, this maple leaf is in wintery shades of blue and vibrant greens. Cropped within the shape of a maple leaf, the bold Vancouver 2010 graphics are inspired by Canada's cultural and environmental diversity as well as the energy and spirit of the Canadian people. Coolest part? For the first time in history, both the Olympic and Paralympic Winter Games official posters are represented in a unified manner; when displayed together, the two halves of the maple leaf join to create a whole. The poster was created by hand using paint and mixed media before any digital composition. We love how they've taken the traditional maple leaf and made it more modern. VANOC Chief Executive Officer. “The posters feature the traditional maple leaf rendered in a new way that is symbolic of a country that is young at heart, diverse, dynamic and fun. The unique pairing of these posters reflect our integrated approach to celebrating the 2010 Olympic and Paralympic Winter Games as one event for Canada.” What do you think about it? Vancouver 2010