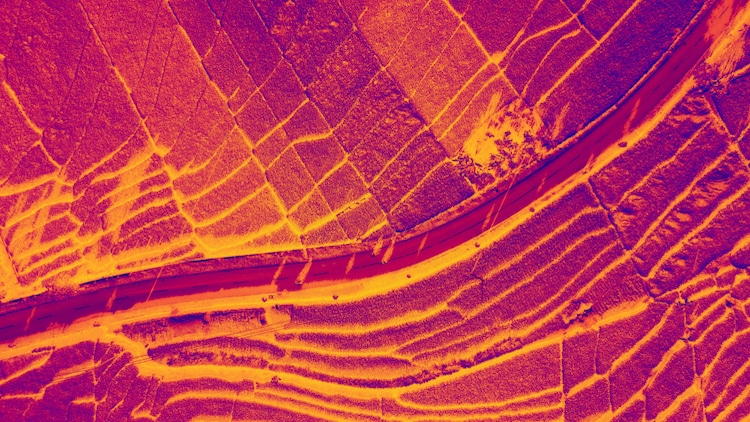 We often discuss drones in terms of the incredible images they produce or, at times, the nuisance they can cause in public spaces. But one drone photographer has just proved that this technology can be life-saving. Drone photographer Steve Fines specializes in commercial imagery, but recently he used his thermal camera to help find a young boy lost in the woods.

Six-year-old Ethan Haus went missing after school. He'd gotten off the bus with his siblings, but soon ran off to play in the woods with his 8-year-old Britney Spaniel, Remmie. Unfortunately, he then got lost and couldn't make his way back home. As temperatures dropped, the entire community of Sherburne County, Minnesota came together to ensure he would be found. Fines was among the 600 volunteers who searched tirelessly for 10 hours while temperatures dropped to below 30 degrees Fahrenheit.

Though he's never used his thermal camera and drone this way previously, Fines' expertise was critical in the search, particularly as darkness set in. Around 1:40am, using information that ground volunteers had given him, Fines was able to narrow in on Ethan and Remmie. He quickly informed rescuers, who were able to make their way to the young boy, who was dressed in light clothing.

“I saw the dog, you can tell that dog is excited and happy. It's wagging [its tail]. I knew [at that moment] what had happened and that was phenomenal,” Fines told KARE 11 News of watching the rescue unfold.

Luckily, Ethan was just fine and was soon able to thank everyone who had a part in his rescue. For Fines, it was an incredible moment to be a part of. While many are hailing him as a hero, he's sure to point out that it was a group effort.

“While I was running the camera that found him and some of the news stories have focused on that, I only knew in which direction to look because volunteers on the ground had found a footprint that pointed me in the right direction,” he wrote on social media. “I knew which areas had already been searched because of the excellent coordination of the Sherburne County Sheriff. I had other volunteers running radios to coordinate ground search parties—the people moving across really rough ground to find him. There were 600 of us that found Ethan that night.”

Given the successful use of the drone, the Sherburne County Sheriff has stated that the department is looking into purchasing their own to help in future situations.

6-year-old Ethan Haus recently went missing after wandering into the woods to play with his dog after school.

Here are photos of Ethan. Thanks to everybody who wants to help. We still are asking people to stay away from the area where he was last seen. We aren't asking for volunteers to search at this time. Check back here for updates. pic.twitter.com/Jb7XbFKHQm

Here are photos of the dog that Ethan was with when he was last seen. Dog's name is Remington, answers to ‘Remmie.” pic.twitter.com/L8SNle4A05

Watch the thermal imagining video that shows the moment that rescuers made their way to Ethan.

This image shows the line of 600 volunteers who spent 10 hours searching for Ethan.

Thanks to everyone's help, Ethan and Remmie are home safe and sound.

This Man’s Rare Blood Is Responsible for Saving the Lives of Over 2.4 Million Babies