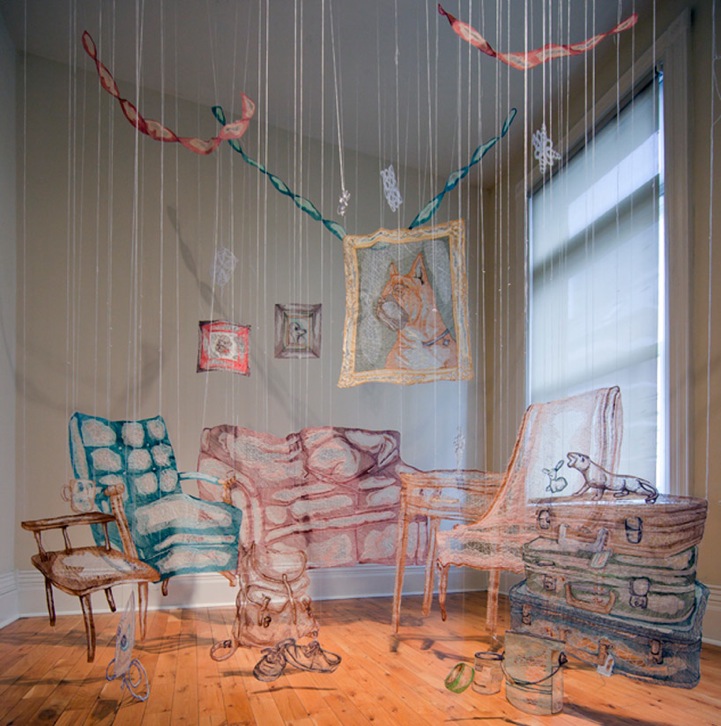 Generally, one uses a handheld utensil like a pen or pencil to draw, but what's the fun in that when you have an innovative mind like artist Amanda McCavour? The Toronoto-based artist creates illustrations made of thread. The technique she employs is unconventional and entirely fascinating. Amanda uses a water-soluable fabric called Solvy, allowing one to sew into the fabric with a resulting product that is devoid of a background or filling. Fundamentally, the Solvy fabric is used as a stabilizer and dissolves when exposed to water, leaving the end-product as a self-sustained outline drawing made of thread.

Amanda's choice of execution is for this “drawing” project is creative and really showcases the strength of thread. The ability of her creations to remain intact once the stabilizer has disintegrated reshapes one's perception of the material's fragility. It doesn't simply unravel and cease to exist as a whole. The “drawings” retain their figure and many of the artist's creations hang suspended in mid-air like 2D aerial sculptures, transcending mediums.

We were fortunate enough to get in touch with Amanda. You can read our full interview with her, below. 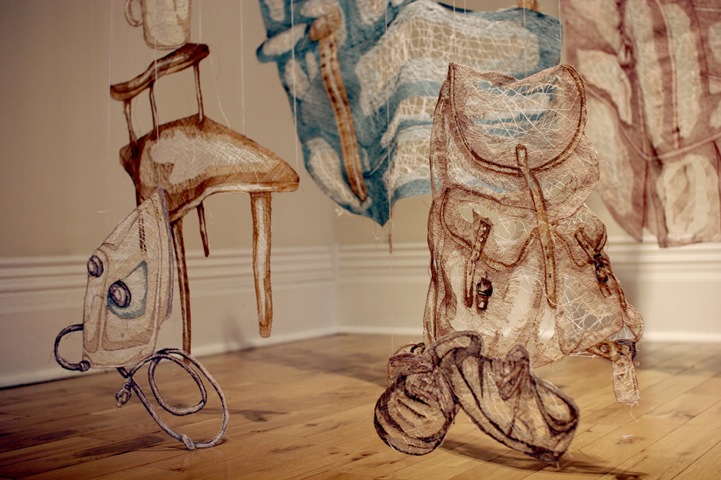 How did you first come up with the process of dissolving thread in water?
The process that I use is actually one where the fabric that I use dissolves in water, leaving the thread that I have sewn behind. I sew with a sewing machine into the fabric so that the thread can start to hold together. Later, when the fabric is dissolved the work can hold together without a base.

I started thinking about how thread was an interesting line in a drawing class in university where we were talking about different types of line. In this class, we talked about how painting could be line, or how line could be used in performance. I was thinking about how it would be interesting to have a drawing that was made only out of thread line. I thought that thread was an interesting line to work with because it's not only two dimensional but it is three dimensional. I started doing some research and found this fabric online. It was the perfect thing and I think still holds a lot of potential. 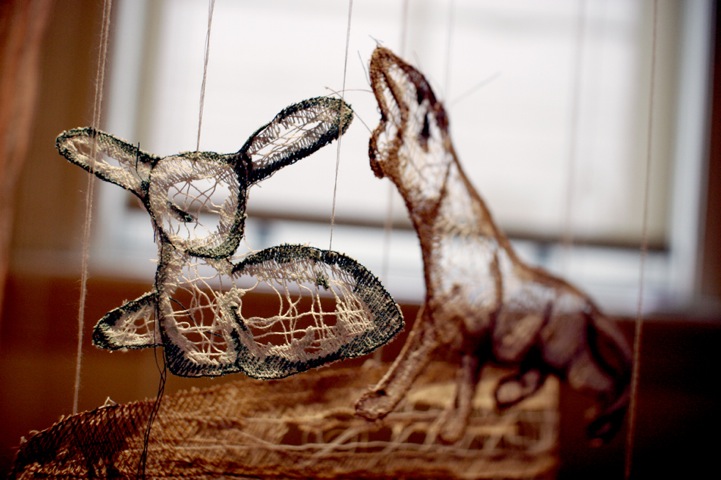 How long does each piece take to create?
Each piece that I make is quite different so they take varying amounts of time. For the installation pieces, those take months to make. Smaller studies could just take an afternoon. 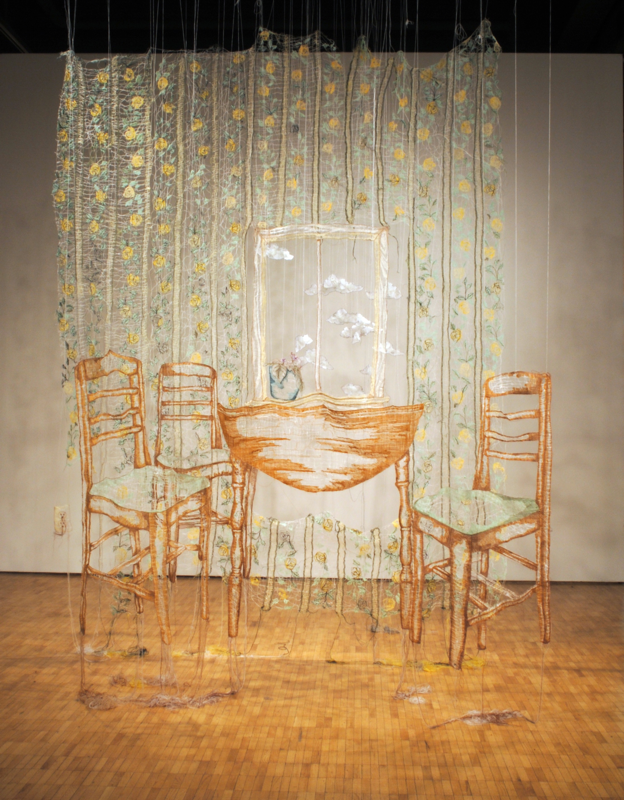 What is it about the vulnerability of thread, its ability to unravel, and its strength when it is sewn together, that interests you?
I think I like things that are sort of on a border of almost falling apart. I like the way that sewn things have this quality, of being on the brink of unraveling, despite how the work can actually hold together really well. I am intrigued by this idea too, that thread when sewn together is actually quite strong despite looking so vulnerable. In the past I was thinking about these qualities when making pieces about spaces that I have left behind, and my memories of those places. 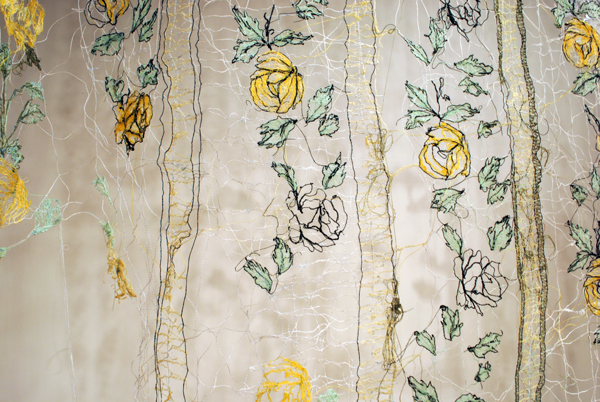 What kinds of parallels do you find in both your thread artwork and life in general?
I think I am influenced a lot by place and that a lot of my ideas stem from an interest in spaces. A lot of my installations are based around locations (most are interior, personal spaces) but other installations have been influenced by the history of the space. I think that there is a parallel or connection between these temporary spaces and the feeling of temporality in my thread work.

We are surrounded by textiles all the time, our clothing, bedsheets, dishcloths. I think that I find connections with fabric and fibre all around us. Life in general is filled with textiles. I like the history of use that is held within thread and sewing, that even though my work isn't being worn or touched, you still have a sense of this history of use and an idea of what the work might feel like. 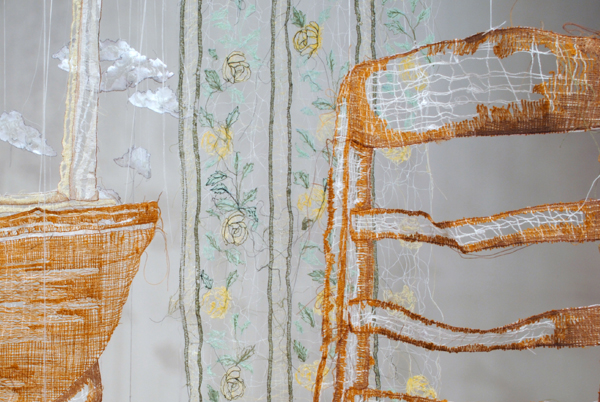 What's next for you?
I have a few shows coming up in early 2012. In January I'm going to be taking part in an off-site project for Design week called Do West. For this project, one of my pieces will be displayed alongside works of design for four days in diverse storefronts and windows along Dundas Street West.(www.dowest.ca) In February, I'm doing a show up in Sudbury at where I will be showing one of my room installations in their gallery space (www.gn-o.org). In March, I'm going to be doing two shows in Toronto, one at Lonsdale Gallery where I will be displaying new work (www.lonsdalegallery.com) and another show at the Design Exchange where I will be doing a large installation piece based on pattern. 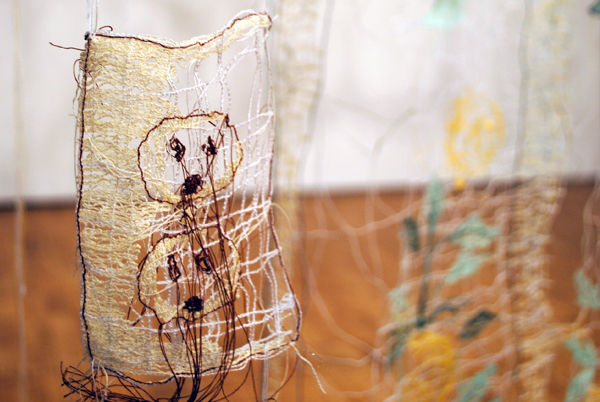 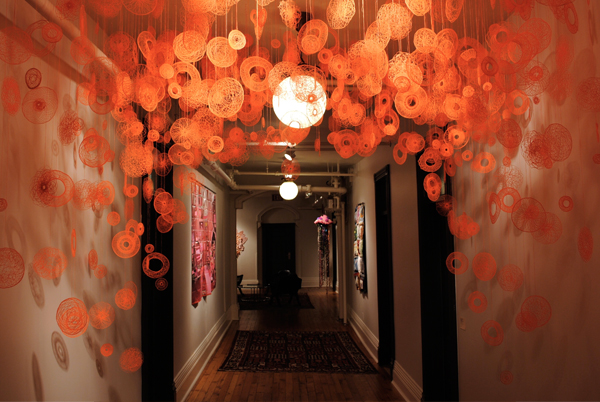 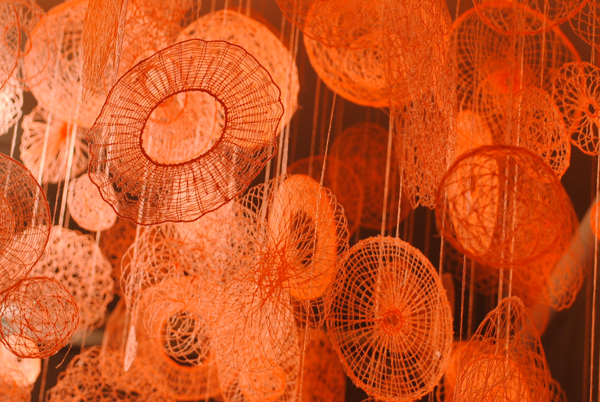 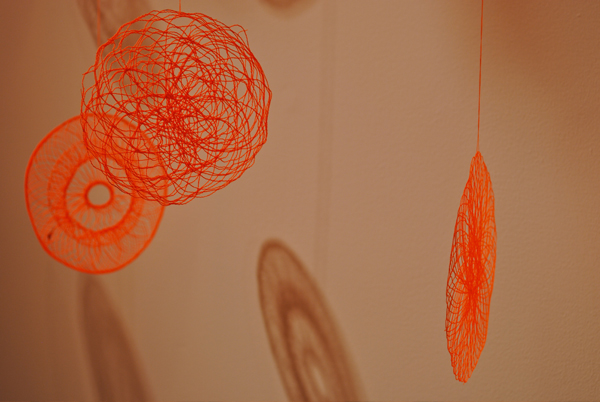 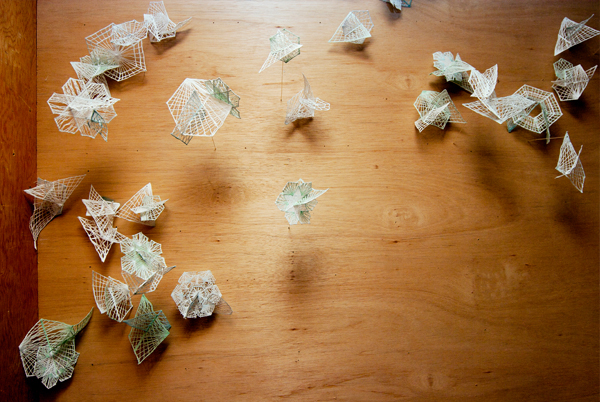 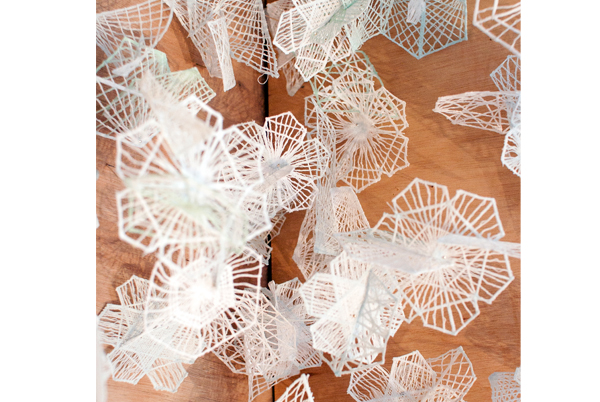 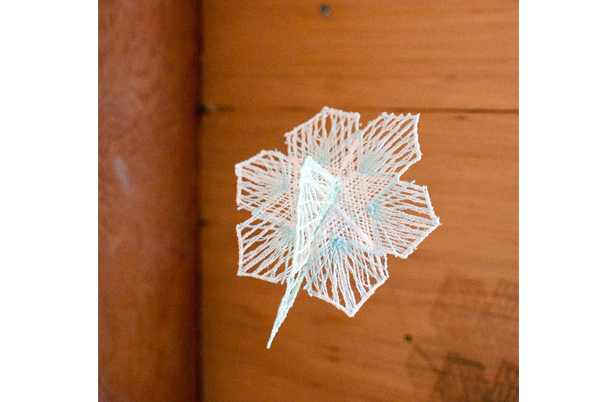