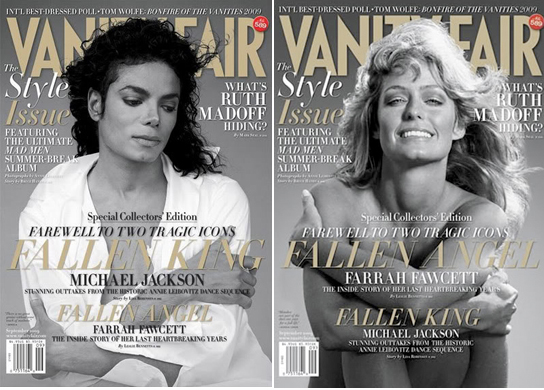 Pick up the September 2009 issue of Vanity Fair to read about two modern day legends we lost on the same day, Michael Jackson and Farrah Fawcett. “Two covers seemed like the sensible thing to do, given the passing of two major American icons on the same day,” said editor in chief Graydon Carter. 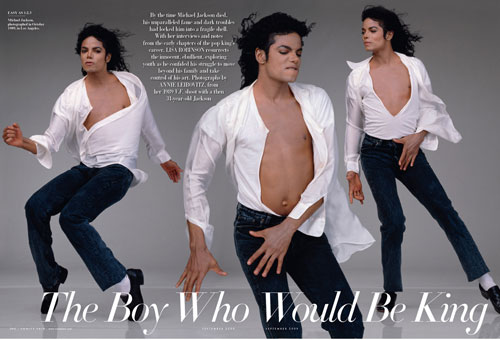 Jackson's cover includes a photo of the superstar by Annie Leibovitz, with an interview retrospective by contributing editor Lisa Robinson. In her article “The Boy Who Would Be King,” Robinson recounts numerous interviews with Jackson, beginning with their first meeting at his family's home in Encino, California, in 1972, when Michael was 14. Here are some excerpts from those interviews: L.R.: Do you ever get scared onstage? M.J.: No. If you know what you're doing, you're not scared onstage. L.R.: As for reality, do you still enjoy meeting your fans? M.J.: I enjoy all that sometimes, seeing people who love me, or buy my records. I think it's fun, and I enjoy meeting my fans and I think it's important. But sometimes people think you owe your life to them; they have a bad attitude, like “I made you who you are.” That may be true–but not that one person. Sometimes you have to say to them, If the music wasn't good, you wouldn't have bought it. Because some of them think they actually own you. Watch Lisa Robinson talk about her interviews with Michael in this video. Farrah's cover was photographed by Bruce McBroom taken in 1976 on the same day she was photographed in her famous red bathing suit. Here is an excerpt: “The truth was that Fawcett had always been more complicated than the clichs, the realities of her life far darker than the sunny image she projected. The gap between her public image and private reality was wide: “I'm always more comfortable when I have on hardly any make-up, my hair is brown and I'm very unattractive,” she said.” If you'd like to say your final farewell, these magazines will be available on newsstands starting today, August 5th. Sources: Vanity Fair and Design Scene