A whale shark cruises just under the surface of Cenderawasih Bay.

Photographer Pete Oxford recently traveled to the southeast corner of the Coral Triangle, home to more than 75% of the world’s coral species, off the coast of West Papua to experience the unique bond between local fisherman and whale sharks. Known as lucky charms for the Indonesian fisherman who fish these waters, the area is a hotspot for young male whale sharks, a notoriously elusive species.

As the largest known existing fish species, these gentle giants can reach up to 40 feet in length and weigh over 20 tons. Spending much of their time in deep water, scientists know very little about their history. They’ve never been caught mating and it’s been difficult to identify their birthing grounds. This makes their year-round presence in the tropical waters of Cenderawasih Bay all the more remarkable.

As Oxford shares in his story for bioGraphic, it’s no accident that the whale sharks have come to enjoy the waters there. “Traditionally, local fishermen have regarded the species with great respect. They believe these gentle giants bring good luck, and so, for decades, they have tossed the sharks fish scraps in the hope of keeping the behemoths—and the good luck they bring—close by.” A young male whale shark feeds on small pieces of fish that escape through the mesh of the fishermen’s nets.

The magical appearance of the whale sharks has also brought in tourists, who leap at the opportunity to swim with these sharks. And don’t let the “whale” fool you, as this part of their name is a misnomer. They are most certainly fish, with gills and cold blood. They get the “whale” portion of their name from their feeding habits. Rather than using some of their 3,000 teeth to feed on larger prey, they simply open up their mouths and swallow nutrients like plankton and small squid—quite similar to the marine mammal.

Over time, the whale sharks have learned to stick close by the fishermen’s floating platforms, where they net squid and small baitfish. The sharks happily wait for some fish to squeeze through the net as it’s scooped up, giving them dinner, and the fisherman—who see them as good luck charms—are happy to send fish scraps back into the waters to keep their friends nearby.

While in Cenderawasih Bay, Oxford has the chance to dive in with the whale sharks, where he had several remarkable experiences. On one occasion, he watched as small fish known as golden trevallies “pilot” a whale shark through the waters. On another, the experience was much more personal. “As I was once again observing the feeding fray, a large male approached from behind, his mouth agape. As he moved toward the surface, I could feel my entire body being scooped out of the water, perched on top of the shark’s nose. Seconds later, I was gracefully lowered back down. The shark and I made eye contact, and I couldn’t help wondering if he was as surprised as I was by what had just happened.”

Read more about Oxford’s time with the whale sharks and how ecotourism is helping boost the local economy, in his story for bioGraphic.

Conservation photographer Pete Oxford spent time with whale sharks in the Coral Triangle off West Papua for his new story with bioGraphic. Bagan fishermen have long considered whale sharks to be good luck charms, and keep them around by regularly tossing fish scraps into the water. A young fisherman, without mask, snorkel, or flippers jumps in with a whale shark as the behemoth passes by his bagan. A whale shark cruises beneath the surface, its outline bathed in refracted light. Juvenile golden trevallies ride in the slipstream in front of the whale shark’s mouth, seemingly piloting the giant through the water. Golden trevallies (Gnathanodon speciosus) swim at the base of a whale shark’s dorsal fin. A free-diver swims alongside a whale shark in Cenderawasih Bay, Indonesia. A whale shark surfaces beneath the Indonesian sailboat, the Damai, which served as the photographer’s home base while in Cenderawasih Bay. A scientist runs a portable tag reader along the side of a whale shark in search of a PIT tag. These tags, placed under the skin of the sharks, enable researchers to track the movements of individuals over the course of their lifetimes.

All images by Pete Oxford. My Modern Met granted permission to use photos by bioGraphic.

What a majestic animal! 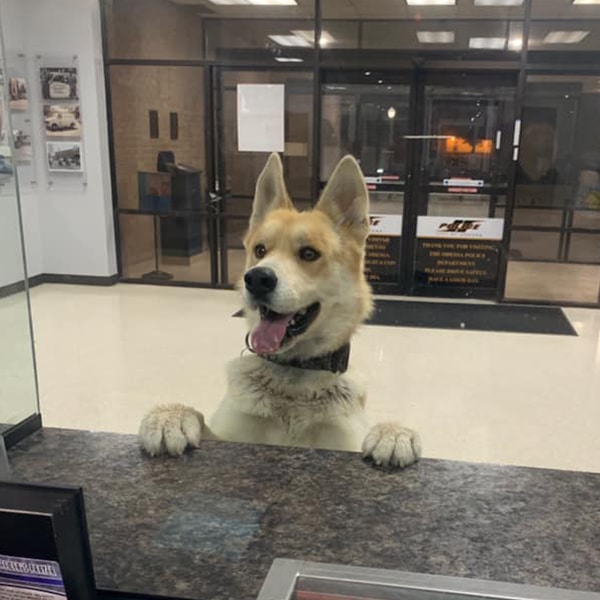 Clever Dog Walks Into Police Station to Report Himself Missing