Winners of the Landscape Photographer of the Year 2013 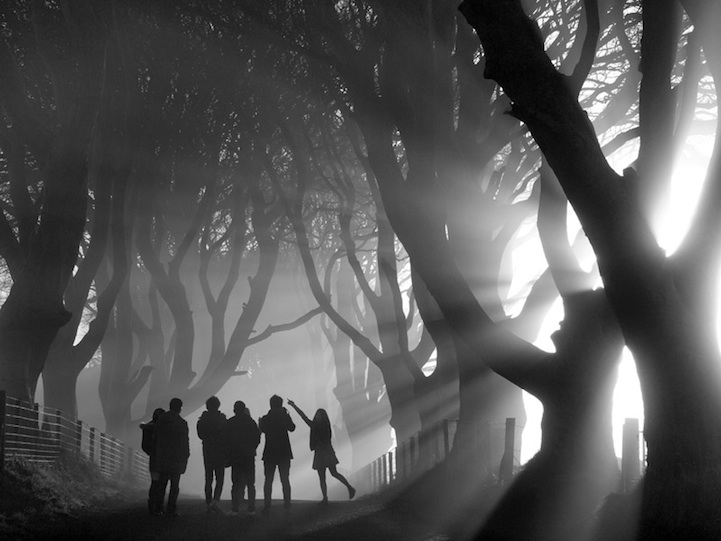 The winners of the Landscape Photographer of the Year were just announced and they include some spectacular images of UK landscapes. The winner of the overall title and the recipient of the ?10,000 grand prize was Tony Bennett of Derbyshire who shot the “magical minutes of an autumn dawn.” His photo was chosen from thousands of entries to nab the top spot. (All images copyright protected.)

Here are some of the other winners from the contest. Our favorite, called Mystical Morning by Bob McCallion shows the silhouettes of a group of young people as they walk through a mystical forest. As McCallion states about his magnificent shot, “This enchanting tunnel of beech trees has become a magnet for visitors from all over the world and it is hard to avoid people at any time of the year. As I pressed the shutter, a slim, almost elfin-like girl broke away from the main group and started pointing, as if to mimic the surrounding branches. I managed to capture her in mid-pose.”

You can see both the winning and commended entries at a special, free exhibition at the National Theatre in London from December 7, 2013 until February 8, 2014. Also, a book called Landscape Photographer of the Year Collection 7, will be released on October 31, 2013 that will feature over 150 of the best entries.

Landscape Photographer of the Year 2013 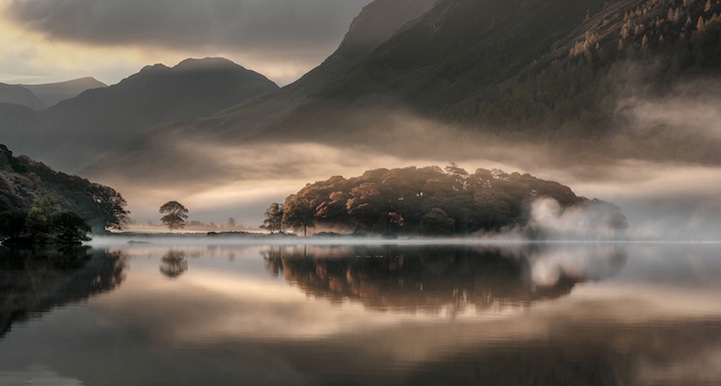 Mist and Reflections, Crummock Water, Cumbria, England
“This photograph was taken during those magical minutes of an autumn dawn when the rising sun began striking the tops of trees and breaking through to the surface of the lake. Every second the scene was changing, creating a hundred memorable images but this moment particularly caught my attention; the still night mist began rolling and tumbling, as if in protest, as the heat of the sun vaporised and dispersed it forever. Within a minute it was over; a moment in time, never to be repeated but always remembered.”
Photo: Tony Bennett (Derbyshire)

Young Landscape Photographer of the Year 2013 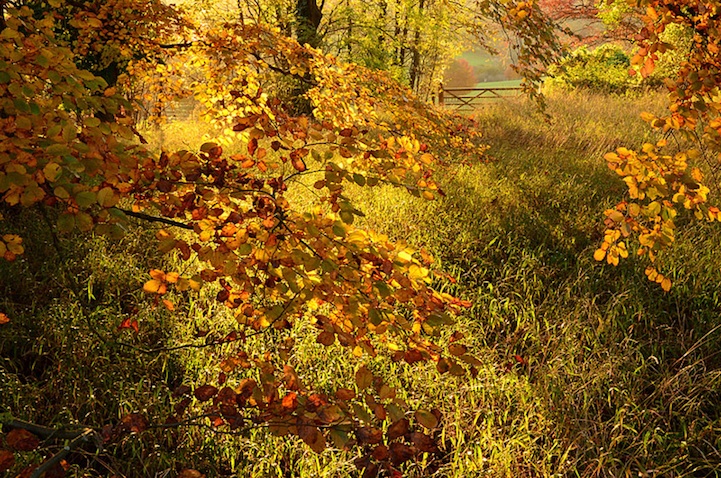 Autumn Colour at Polesden Lacey, Surrey, England
“The colour of the autumn leaves was pitch-perfect and the low, golden light created a blaze of colour. All that was needed now was a focal point to ground the composition and luckily the hard lines of the gate perfectly complemented the golden leaves.”
Photo: Christopher Page (Kent) 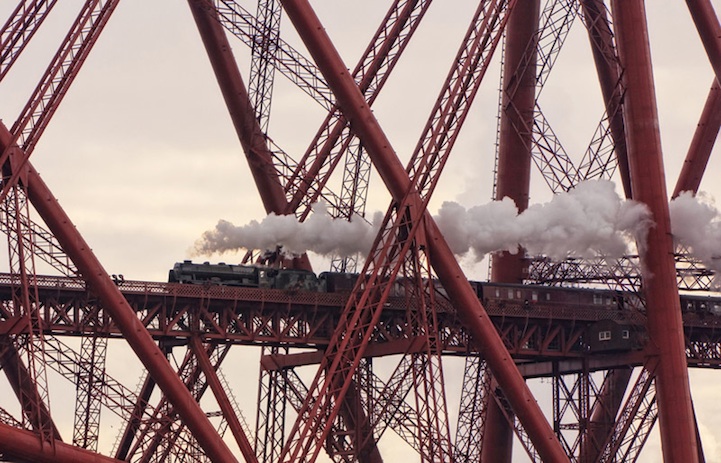 Caught in a Web of Iron, North Queensferry, Fife, Scotland
“The Forth Rail Bridge had recently been repainted and I timed this visit to North Queensferry to coincide with the crossing of a steam train. This was the scene as the LMS Royal Scot Class 6115 ‘Scots Guardsman' hauled its carriages north over the bridge early one morning. I was drawn to the finesse of the details within the massive structure and chose the gap in the bracing to frame the locomotive.”
Photo: David Cation (Glasgow) 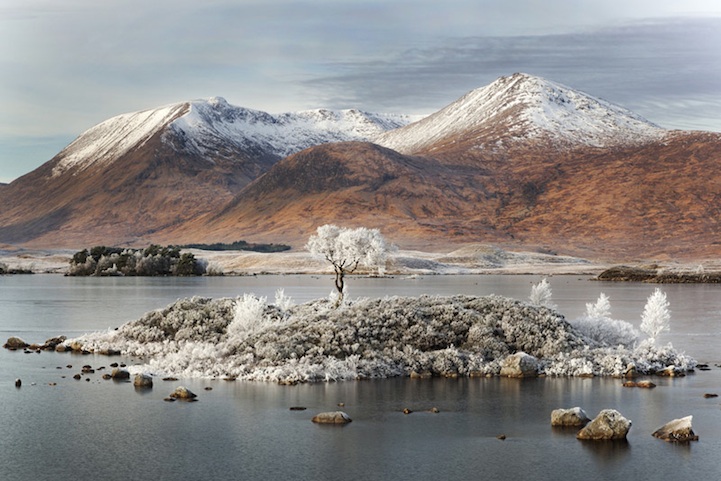 Ghost of Rannoch Moor, Scotland
“Enveloped in a veil of white hoar frost, the well known ‘island tree' of Rannoch Moor stands as a ghostly reminder of what is no longer present. A perfect, freezing morning with clearing skies and no-one else present, made this day feel very special.”
Photo: David Breen (Northumberland) 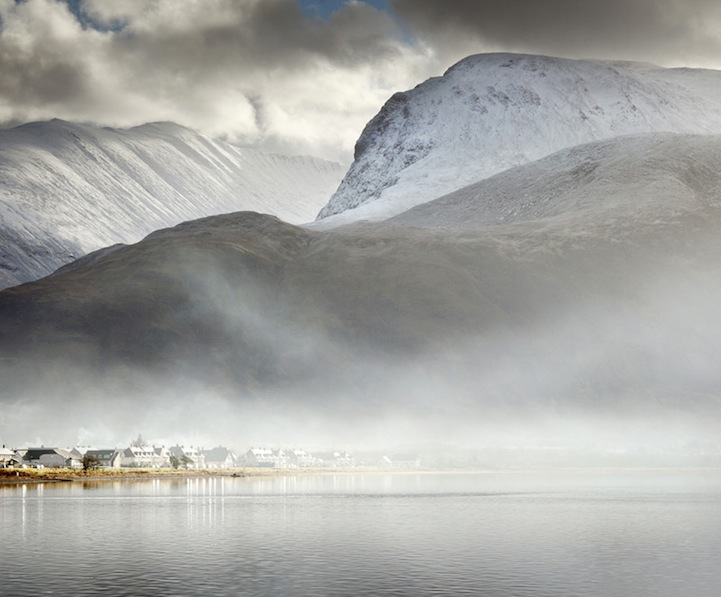 Bill & Ben, Fort William, Scotland
“Driving home from an autumn trip to the Highlands, I couldn't resist stopping at Corpach. Sunlight was illuminating the morning mist rising from Loch Linnhe, creating a most impressive scene. Houses on the outskirts of Fort William or ‘Bill', as affectionately known, set the scale with the snow covered bulk of Ben Nevis towering above to the right. Getting the exposure correct was tricky and took experimentation with graduated filters and a few frames. It's a long drive back to Yorkshire but I managed to spare a few minutes to get it right.”
Photo: Robert Birkby 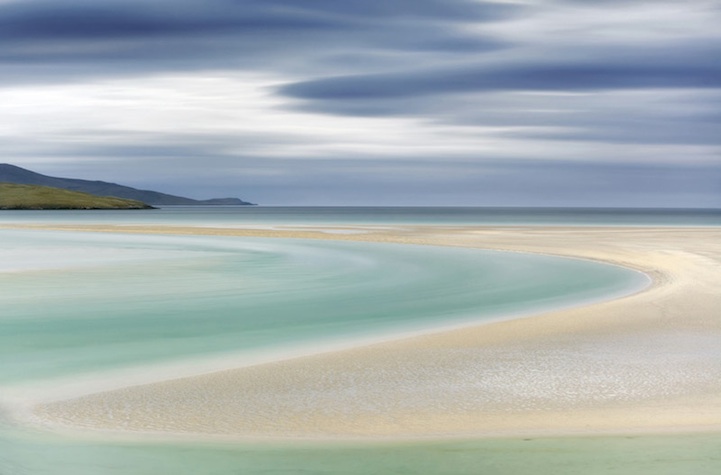 Curves, Luskentyre, Isle of Harris, Scotland
“The light was fading but I was determined to catch a shot of the sweeping sands whilst the tide was at optimal position. The first couple of frames showed promise with the stunning pastel tones of the water and sand but the sky looked slightly less impressive. I then fitted a neutral density filter to dramatically increase the exposure time and smooth out the whole scene. There was just enough movement in the clouds and the resulting shapes in the sky seemed to compliment the curves in the sand below.”
Photo: Robert Birkby 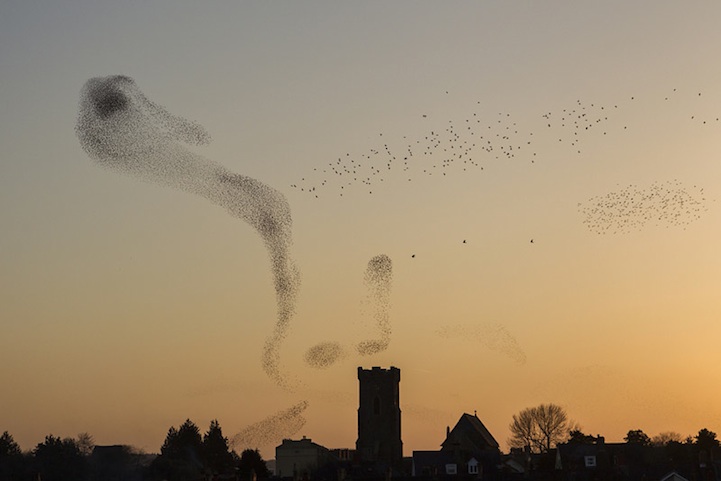 Starlings over Carmarthen, South-west Wales
“In January 2011, Carmarthen began to play host to some unusual visitors. Starlings were making part of the town their roost for the night. By early March it was being estimated that in excess of 250,000 birds were arriving every evening. The murmurations were a wonderful sight and this photograph captures what was probably the most spectacular combination of shapes seen above the urban skyline.”
Photo: Nigel McCall (S Wales) 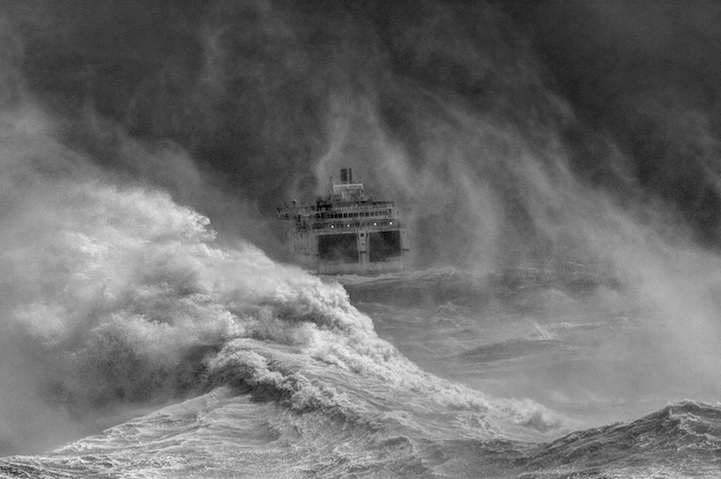 Ferry leaving Newhaven harbour in storm, East Sussex, England
“After shooting waves crashing over Newhaven lighthouse for about an hour during a summer storm, I decided to change position and try to get some shots covering the seaward side of the harbour wall from the shingle beach. As I approached the beach, I saw the funnel of the ferry over the sea wall, so I sprinted down the shingle with camera still attached to the tripod and managed to get a few frames before it disappeared.”
Photo: David Lyon (Surrey) 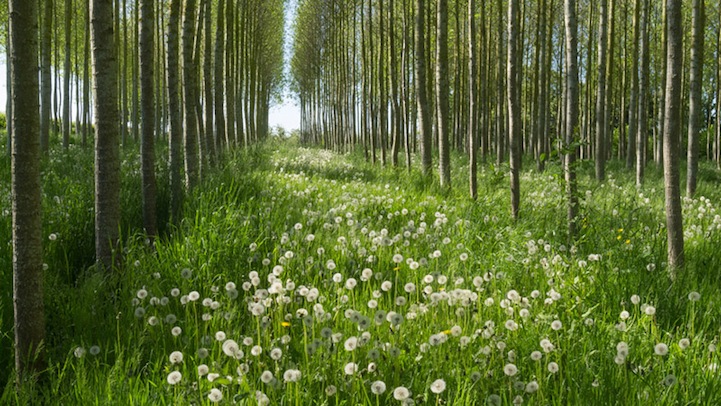 Morning Light in the Poplars, Herefordshire, England
“I photographed these trees on a July morning with strong sunlight. I particularly liked the dappled pattern of light on the ground, with the dandelions resplendent in the sun. The rows of trees beyond add a sense of depth and the splash of blue sky in the distance completes the picture and breaks up the predominant green.”
Photo: Steve Gray