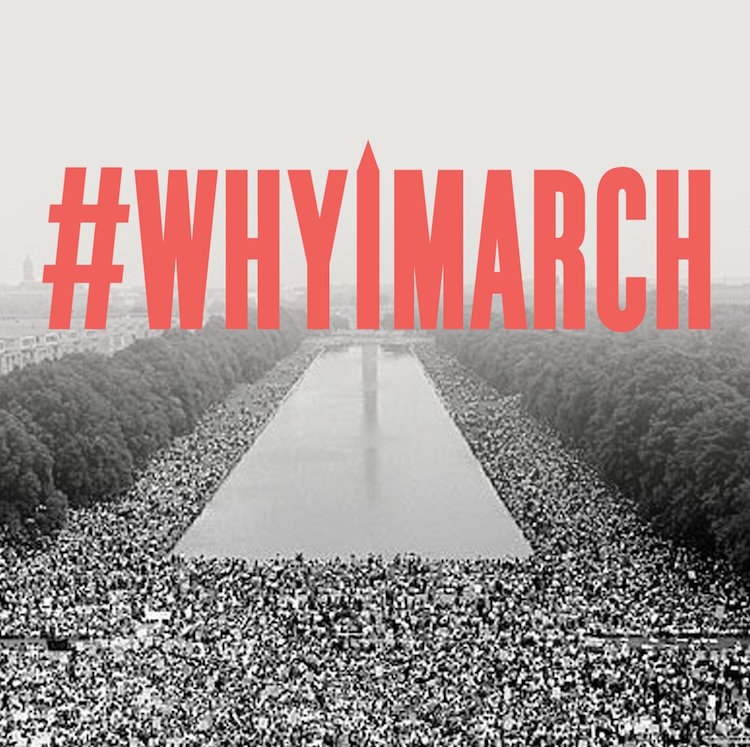 Photo via The Women's March

On Saturday, January 21—President Trump's first full day in office—millions of people across cities, countries, and even continents took to the streets to fight for gender equality and reject the newly-inaugurated president's attitude toward women. Although achieving equal rights was the primary goal of the march, many participants have flocked to Twitter to share their specific and personal reasons for joining the cause using the hashtag, #WhyIMarch.

Inspired by the official Women's March on Washington , the string of demonstrations provided an empowering platform for people of all genders, races, nationalities, and religious beliefs to support and empower females for various reasons. Groups of people marched for their family members, others participated to defend those most in need, some did it for their role models, and many joined to finally empower themselves.

Whatever the motivation, the message is loud and clear: women's rights are human rights.

Using the hashtag, #WhyIMarch, Twitter users have shared their personal reasons for participating in the Women's March.

I'm marching because the freedom to decide what to do with one's body is the most basic and profound human right. #WomensMarch #whyIMarch

To demand equality, reproductive rights, safety for people of all races, beliefs, gender or sexual identities. For Justice! #WhyIMarch

#WhyIMarch because everyone deserves the same rights, no matter their gender, race, origin, or sexuality #WomensMarch

Many women marched to ensure such rights for their daughters and granddaughters.

#WhyIMarch #January21 @womensmarch – I march for my granddaughter and all young girls! pic.twitter.com/zP7Kt4BeX8

Some even joined to send a positive message to their sons.

I’ll never forget when my 3 year old son, Mateo Ali told me that he wants to be @HillaryClinton when he grows up. That matters. #WhyIMarch

Others participated to represent their mothers and grandmothers…

Marching b/c my mom came to this country so I could have the opportunities she was denied for being a woman #WhyIMarch pic.twitter.com/nYCrtunQ4S

I march in loving memory of my Grandma who never had the chance to go to school #WhyIMarch @hrw pic.twitter.com/7ZjgxUtctb

For the women who fought for the vote, her seat on the bus and her place in the office. #WhyIMarch #WomensMarch #Seattle

@womensmarch I'm marching because, like most women, I too am human, & support human rights & equality. Also, these characters #whyimarch pic.twitter.com/ekvyuR35zi

For the rights of the generations to come 💛 #whyIMarch #WomensMarch

…Including, of course, themselves.

I'm never going to let anyone tell me I am not enough because I'm Latina, a woman and POC. #WhyIMarch

I am marching to be strengthened and uplifted. I am hoping to gather knowledge on how to go forward #WhyIMarch

I am everything he thinks is evil- Mexican, female, immigrant, scientist, educated, not scared, successful, open-minded #WhyIMarch #Jan21 🇺🇸

#WhyIMarch: I have decided not to be reduced by any events, social or political, that aim to rob me of my dignity. #FBF Angelou & Steinem pic.twitter.com/6Yd9H93ln4

Many people marched as allies for those who need extra support.

#whyIMarch because immigrants are here to stay and they are what make this country great. #WomansMarch pic.twitter.com/cdAZgM4kBB

Sending love to my undocumented sisters and brothers. I will fight with you and for you. #HereToStay #WhyIMarch

I'm marching to show solidarity with and LISTEN to others for whom this system does not and has never worked. #WhyIMarch

@womensmarch As a therapist, client survivors have been destabilized with a sexual predator elected to POTUS. 1 reason #whyIMarch

And for Planned Parenthood, a vital and threatened organization.

For the millions of men & women who rely on Planned Parenthood for their health care needs. #WhyIMarch pic.twitter.com/2dMYon8JGH

#whyIMarch because Planned Parenthood helped me when my doctor refused to listen.

Back from the March and hanging up my sign #marchonlansing #whyimarch #WomensMarch #PlannedParenthood @PPact pic.twitter.com/bJbNIvwPqC

And many, unsurprisingly, did it as a big ‘thank you' to Hillary Clinton.

#whyIMarch: #imarchfor Hillary Clinton, the millions of girls she has inspired to #dreambig, and the Madam POTUS we will one day elect. pic.twitter.com/04z8yyWTmB

@womensmarch I march because the Revolution Is Female. It was always female, and will always be in Hillary's name. #WhyIMarch pic.twitter.com/PTEpvkkVir

To honor those female warriors, trailblazers, like Hillary Clinton-and give voice to their concerns in a new era. #whyimarch

We are beautiful👯. We are powerful👸. We are deserving✌. #WearTheCrown #WomensMarchOnWashington #whyIMarch pic.twitter.com/3hn6JMKszt

The Women's March may be over, but our work has just begun.

To learn how you can still support the cause, be sure to check out the official website of the Women's March. And, if you were one of the million marchers, be sure to share your own reason for participating by using the hashtag #whyIMarch on Twitter.