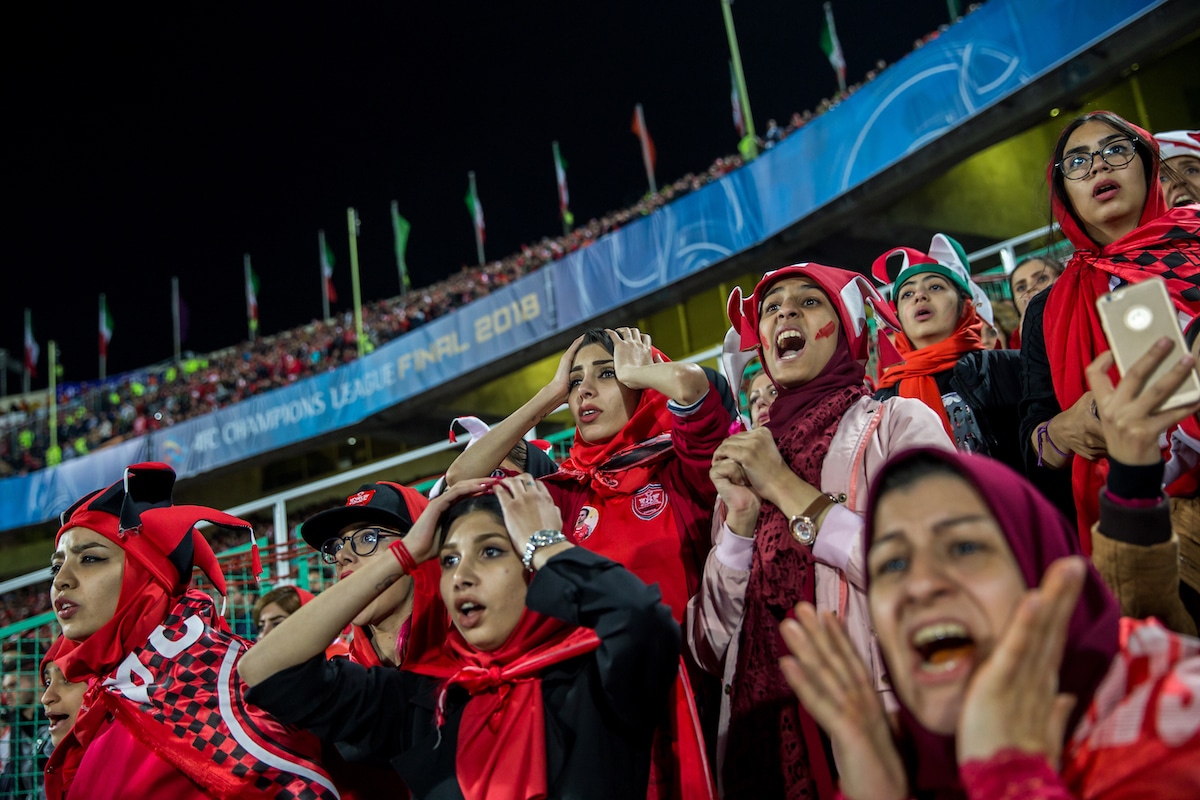 Sports, Stories, Nominee
“Crying for Freedom” © Forough Alaei
In Iran, female fans are banned from entering football stadiums. As football is the nation’s most popular sport, the ban has been a controversial public issue. On 1 March 2018, FIFA president Gianni Infanto met with the president of Iran, Hassan Rouhani, to address the issue. Social-media groups also put the president under pressure, and on 20 June 2018 a ruling allowed Tehran’s Azadi and Takhti stadiums to admit selected groups of women for international matches. The concession to women fans applied only to international matches, and after a senior judicial officer objected in October 2018, it was withdrawn. On 10 November 2018, the FIFA president, who was attending the AFC Cup match in Tehran, asked to be shown that women were being allowed to attend. A selection of women were permitted to enter, though many others were barred. 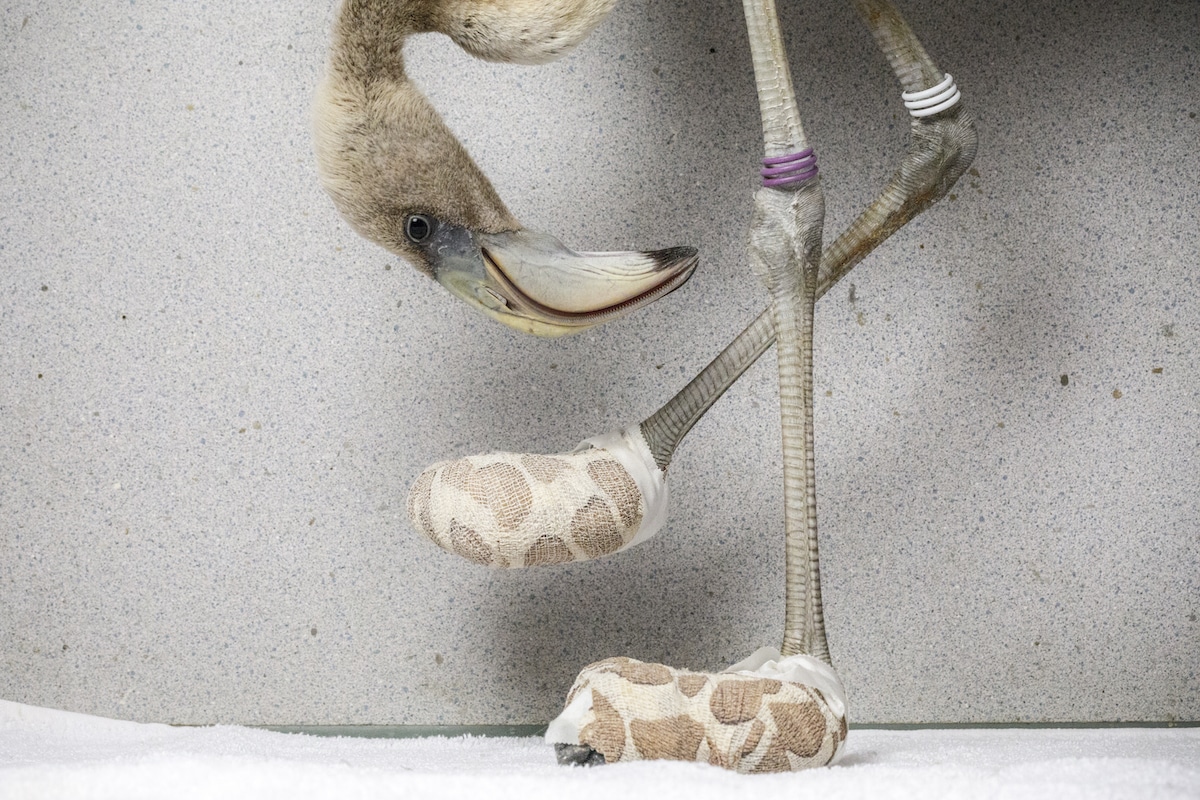 Nature, Singles, Nominee
“Flamingo Socks” © Jasper Doest
A Caribbean flamingo inspects the improvised socks created to help heal its severe foot lesions, at the Fundashon Dier en Onderwijs Cariben, Curaçao. The bird was brought by plane from neighboring island Bonaire, after spending a few weeks in a local rehabilitation facility. Such lesions are common among captive flamingos, as they have very sensitive feet and are used to walking on soft ground. After a few weeks of care, the bird was transported back to Bonaire There are around 3,000 breeding pairs of Caribbean flamingos on Bonaire, and a further 200 to 300 birds on Curaçao. 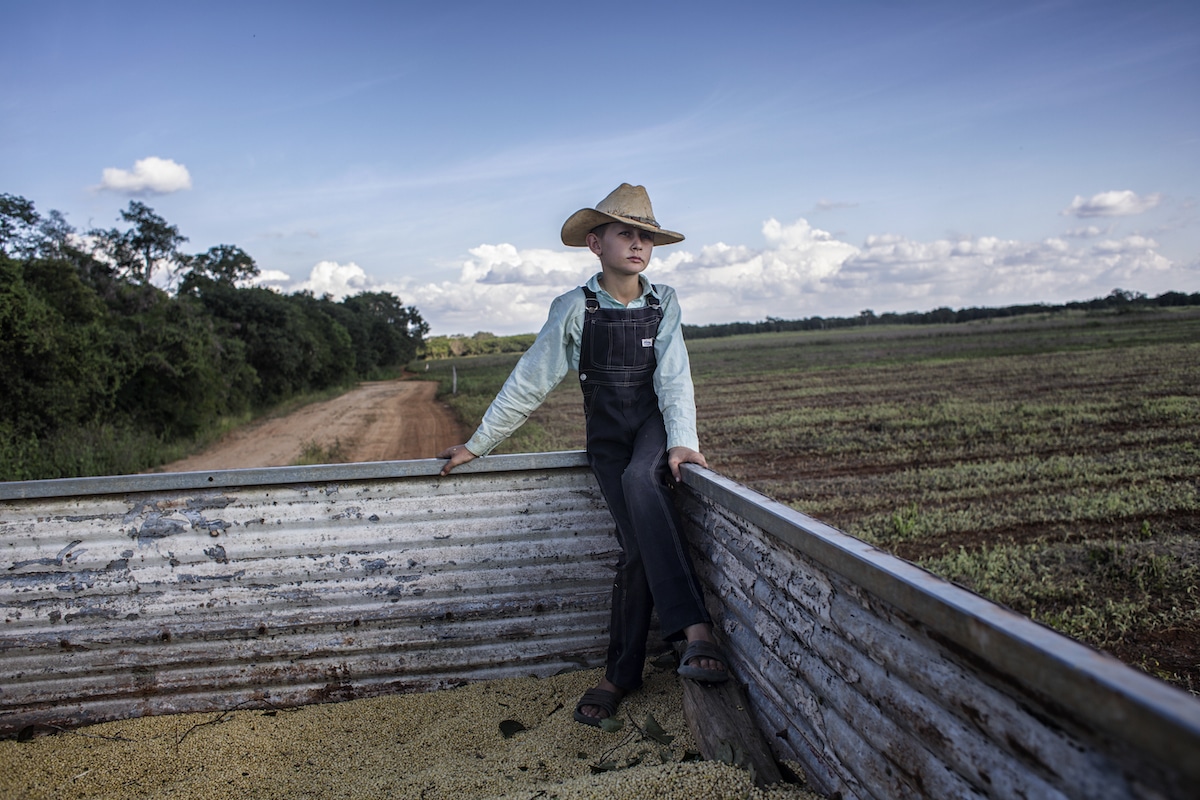 Environment, Stories, Nominee
“God’s Honey” © Nadia Shira Cohen
Peter Peter (10) rides in his father’s truck during soy harvest, in Nuevo Durango.
Mennonite farmers growing soy in Campeche, on the Yucatán Peninsula in Mexico, are allegedly adversely affecting the livelihood of local Mayan beekeepers. The Mennonites farm large tracts of land in the area. Environmental groups and honey producers say that the introduction of genetically modified soy and use of the agrochemical glyphosate endangers health, contaminates crops, and reduces the market value of honey by threatening its ‘organic’ label. Soy production also leads to deforestation, as land is increasingly bought for farming, further affecting bee populations. 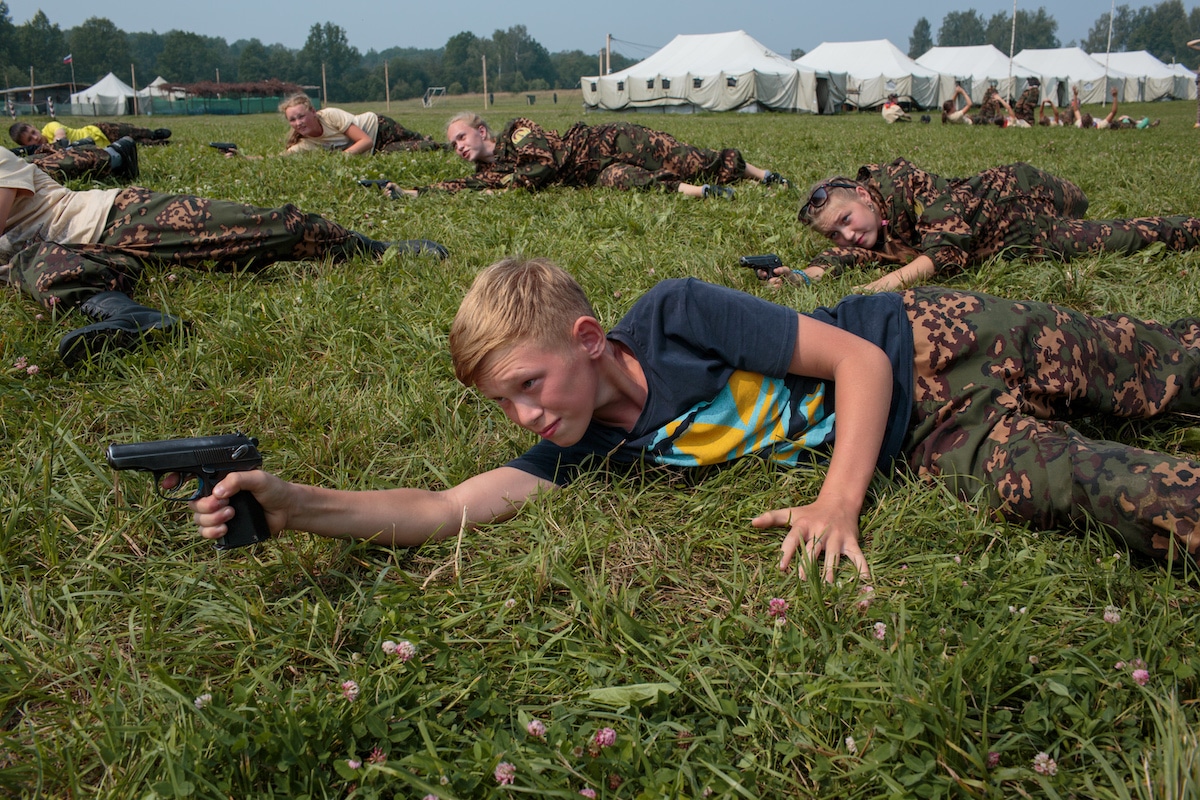 Long-Term Project Nominee
“Beckon Us From Home”
© Sarah Blesener
Students undergo firearms training using airguns at Borodino, the battleground where Russia fought Napoleon’s forces in 1812.
Patriotic education, often with a military subtext, forms the mainspring of many youth programs in both Russia and the United States. In America, the dual messages of ‘America first’ and ‘Americanism’ can be found not only as a driving force behind adult political movements but around the country in camps and clubs where young people are taught what it means to be an American. In Russia, patriotic clubs and camps are encouraged by the government. The photographer visited ten youth programs in the US, as well as schools and military summer camps in Russia. 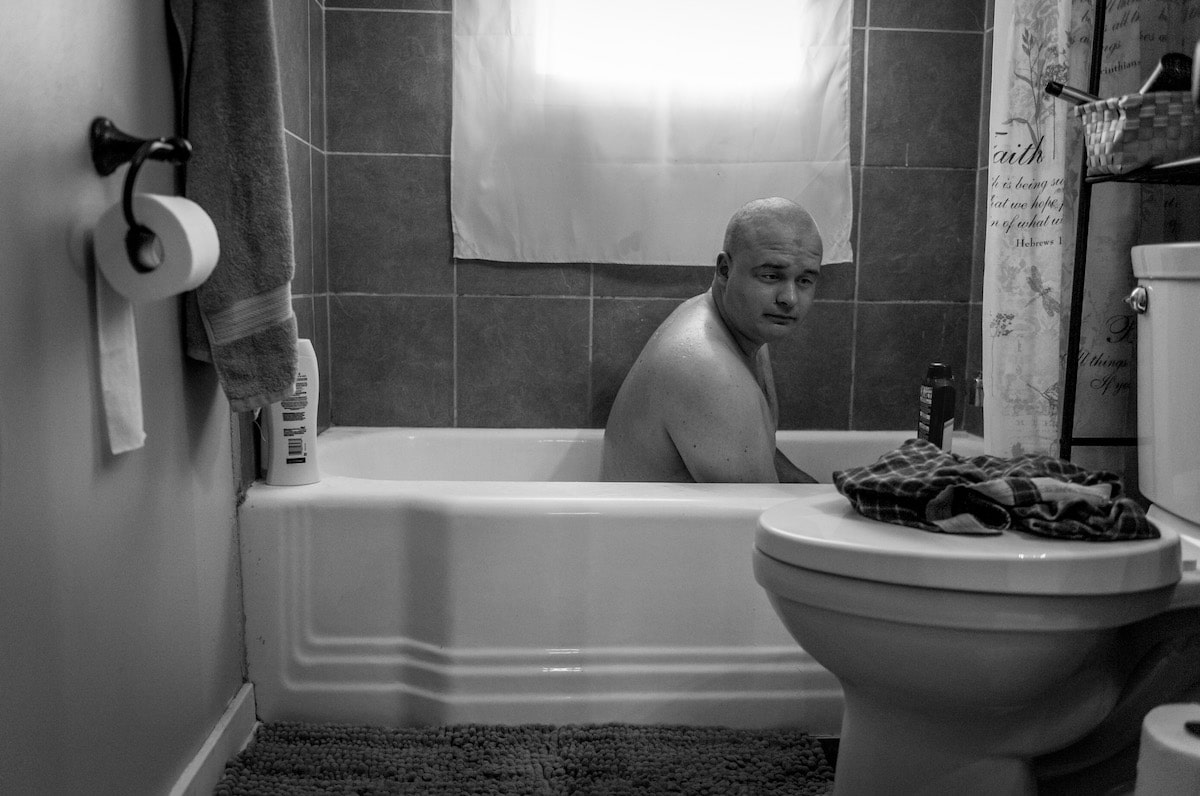 Contemporary Issues, Singles, Nominee
“Male Rape” © Mary F. Calvert
Former US marine Ethan Hanson bathes at home in Austin, Minnesota, USA, after a sexual trauma experienced during his military service left him unable to take showers.
During a boot camp, Ethan and fellow recruits were ordered to walk naked through a communal shower while pressed together. Ethan reported the incident but was harassed by the other men for doing so. Nightmares and panic attacks later forced him to resign. Recent Defense Department figures show sexual assault in the military to be on the increase. Servicemen are less likely than women to report sexual trauma, fearing retaliation or stigma. 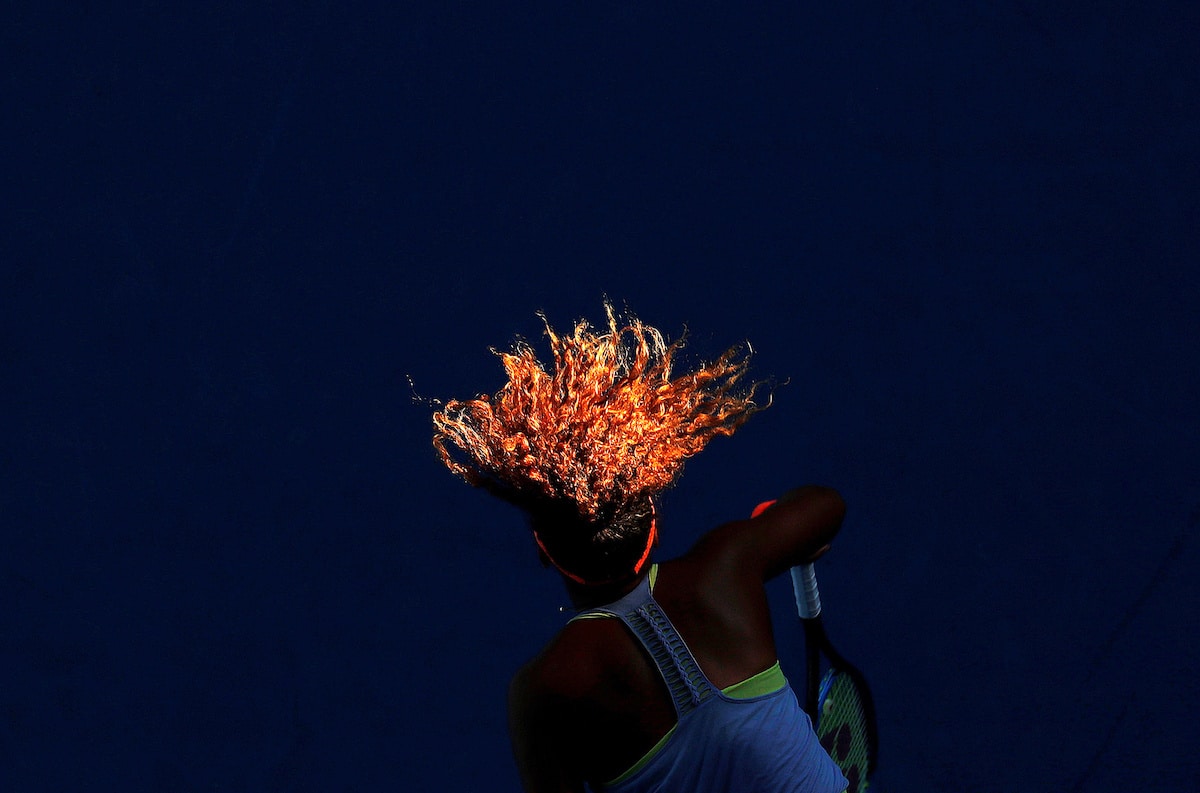 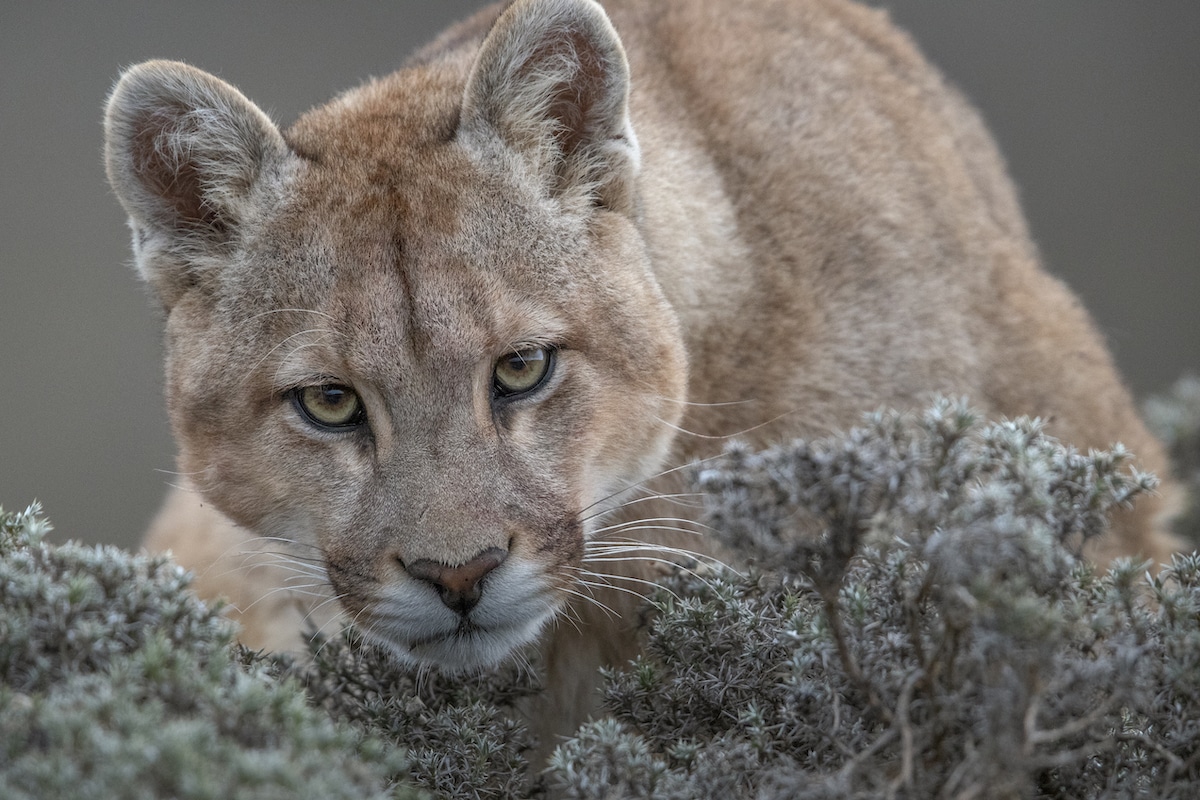 Nature, Stories, Nominee
“Wild Pumas of Patagonia” © Ingo Arndt, for National Geographic
Pumas, also known as mountain lions or cougars, are found from the Canadian Yukon to the southern Andes, the widest range of any large wild mammal in the Western Hemisphere. They can survive in a variety of habitats, from deserts and prairies to forests and snowy mountains, but are generally shy and elusive to humans. Torres del Paine national park in Chilean Patagonia is thought to contain higher concentrations of pumas than anywhere in the world. Pumas are ambush predators, stalking their prey from a distance for an hour or more before attacking. In Torres del Paine, pumas feed mainly on guanacos, which are closely related to llamas.

My Modern Met granted permission to use photos by World Press Photo.

Page 2/2
What do you think of the nominees? Share
Like My Modern Met on Facebook
Get Our Weekly Newsletter
Become a
My Modern Met Member
As a member, you'll join us in our effort to support the arts.
Become a Member
Explore member benefits