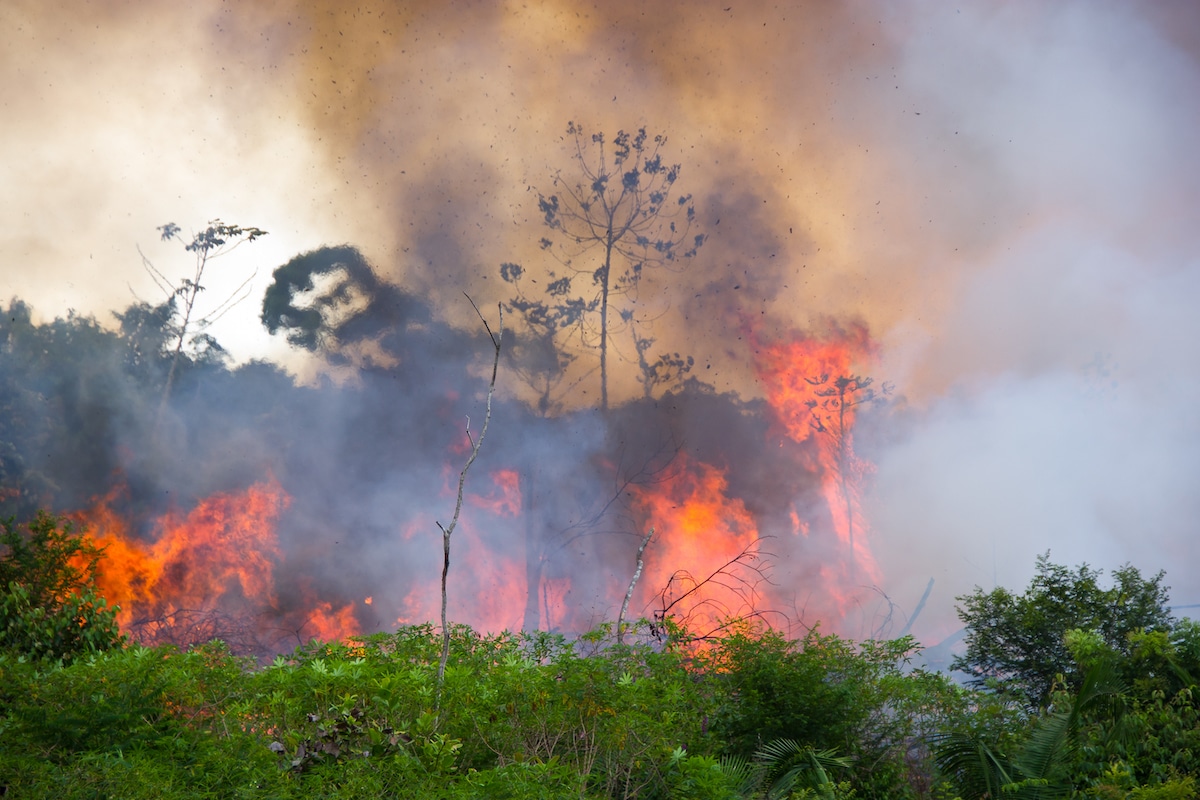 Unsettling news is coming out of Brazil, as a record number of fires are being reported in the Amazon. Often referred to as the lungs of our planet, the Amazon produces 20% of the oxygen in Earth's atmosphere. For just this reason alone, no matter where you live on the planet, the fires will affect you. More than 72,000 forest fires have broken out in 2019 thus far, up 83% over the same period last year. Shockingly, 9,500 fires have occurred just since August 15.

Though the rainforest has a humid climate that helps cut down on fires, it does have a dry season that occurs from July to October with a peak in September. This means that heading into the coming month, we can expect even more of the Brazilian Amazon to burn. The fires are so large that they actually caused the sky to darken in São Paolo—about 1,700 miles away from where the blazes are happening.

So what's causing this record number of fires? There are many factors to take into consideration. Climate change certainly has some involvement and researchers have warned that the rainforest is becoming more susceptible to fire due to increased drought. However, there's great suspicion that we're not just seeing wildfires here. National Institute for Space Research (INPE) researcher Alberto Setzer told Reuters that there was nothing significantly different about the amount of rainfall this year to provoke the record number of fires. 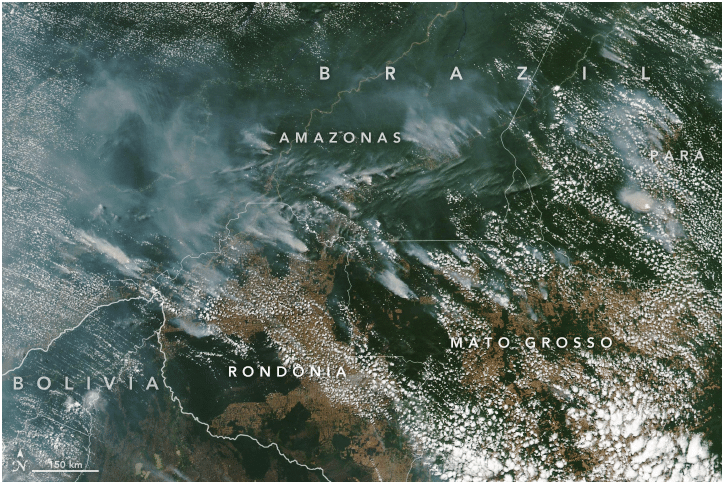 Many feel that farmers and loggers are taking advantage of the dry season to start fires and clear land. This comes on the heels of news that July set a record for the amount of deforestation in the Brazilian Amazon, with 519 square miles (1,345 square kilometers) cleared. Brazilian satellites showed that a soccer field's worth of trees fell every minute last month, with deforestation up 278% from July 2018.

Environmental groups are pointing the finger at President Jair Bolsonaro, who fired the director of INPE after the agency published numbers on the record deforestation. Bolsonaro accused the now-former director, Professor Ricardo Magnus Osório Galvão, of lying about the data to please environmental groups. For its part, INPE stands behind its data. Part of the president's election platform was to relax environmental regulations and open up more of the rainforest for agriculture and mining. During his time in office, Brazil's environmental agency has seen its budget cut by 24%, something that the New York Times refers to as the reason that environmental actions have dropped 20% in the past six months.

The fires, often started to clear pasture for cattle or crops, can quickly get out of control.  All of this comes together in a perfect storm that may be emboldening humans to start more fires in the Amazon. In fact, Ricardo Mello, head of the World Wide Fund for Nature (WWF) Amazon Program, said that “what we are seeing is a consequence of the increase in deforestation seen in recent figures.”

This compilation of videos from social media shows the devastation of the Brazilian Amazon fires.

Smoke from the forest fires has caused the sky in São Paolo—over 1,700 miles away—to darken in the middle of the day.

This is Sao Paulo today, 4PM. The cloud from the burning of Amazon rainforest in Rondonia, covered the city. Sao Paulo is 3300km (2052 miles) distant from Boa Vista. Athens is closer to London than Sao Paulo is to Boa Vista. Just to give you an idea of the damage. pic.twitter.com/rVVBFFxPZS

Imaging from the EU's Copernicus satellite shows the incredible amount of smoke and carbon dioxide the fires are releasing into the atmosphere. 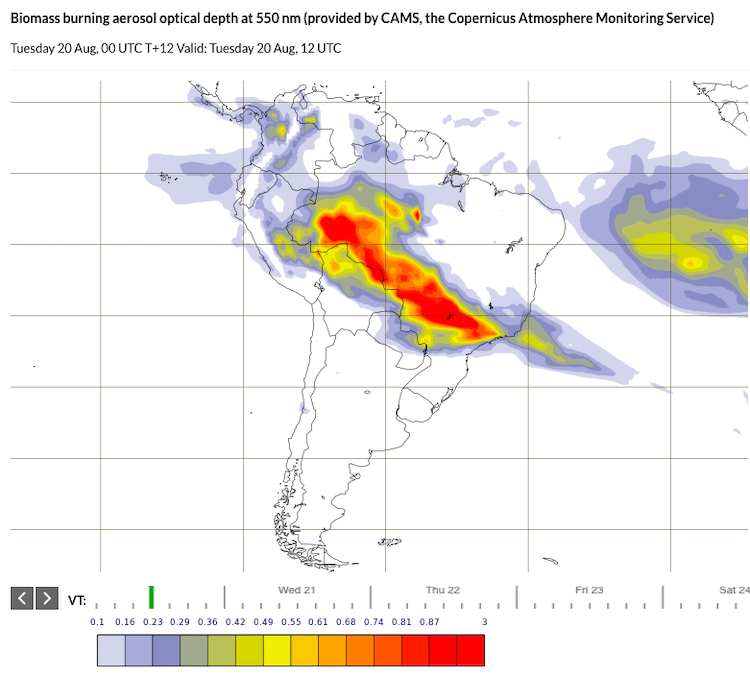 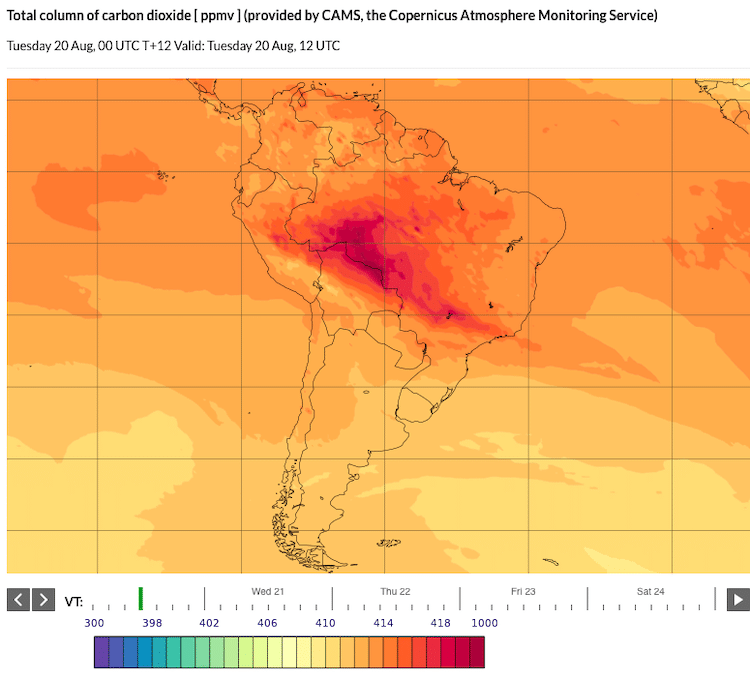