Perfectly-Timed Photo of a Tree Frog Riding a Beetle 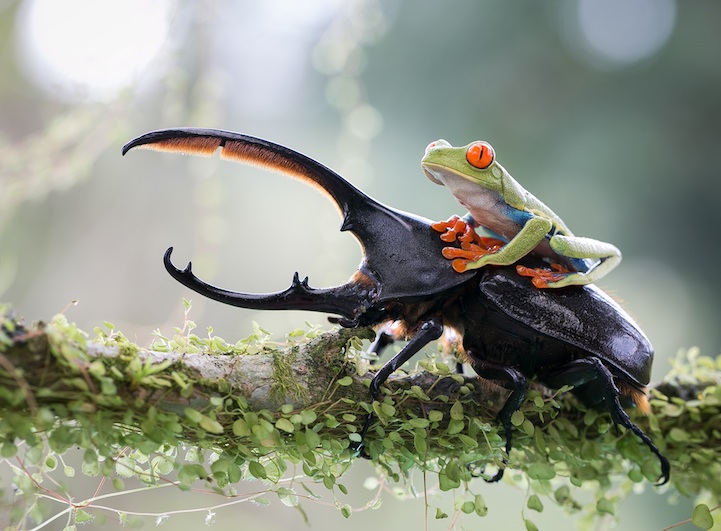 Aside from National Geographic's photo contests, the Sony World Photography Awards is one of our favorite photo competitions to write about. For years now, we've showcased their standout entries and announced their winners. Open to students, amateur photographers and professionals, the competition receives an incredible number of submissions (over 100,000) in such interesting and diverse categories as Arts and Culture, Enhanced, Low Light, Split Second, and Smile.

One of this year's early entries is this perfectly-timed photo of a tree frog proudly riding a beetle. Taken by photographer Nicolas Reusens Boden, it's hilariously called, The Knight and His Steed.

States the photographer, “This picture was taken in a natural but controlled environment. There are pictures that can not be done in nature or that would imply a very high cost of both time and money, that's why photography workshops are run conducted at strategic locations and bringing EVERYONE who is interested, the basic notions (lighting, camera handling, composition, etc…) or the specimens, and afford them the opportunity to take pictures like this.

“Although controlled, this shot was not prepared at all, I was performing a workshop with the agalychnis callidryas treefrog from Costa Rica when the frog managed to jump to the branch where this huge titan was sleeping…I had my gear ready so I only had to change a few settings and shoot…the rest is history.”