10 Awesome Ad Campaigns That Give You an Experience 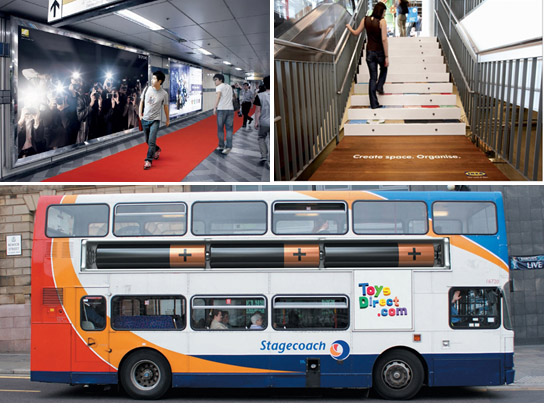 It's my firm belief that the most memorable ad campaigns are the ones that give you an experience. Don't just throw garbage in our faces, stop us in our tracks and make us think twice about your message. Let us experience the brand in a positive way – don't be rude to us and insult our intelligence. Instead, make us laugh, make us excited and most of all, make it awesome. Here are ten example. 1. Israel Cancer Association: Unknown stain 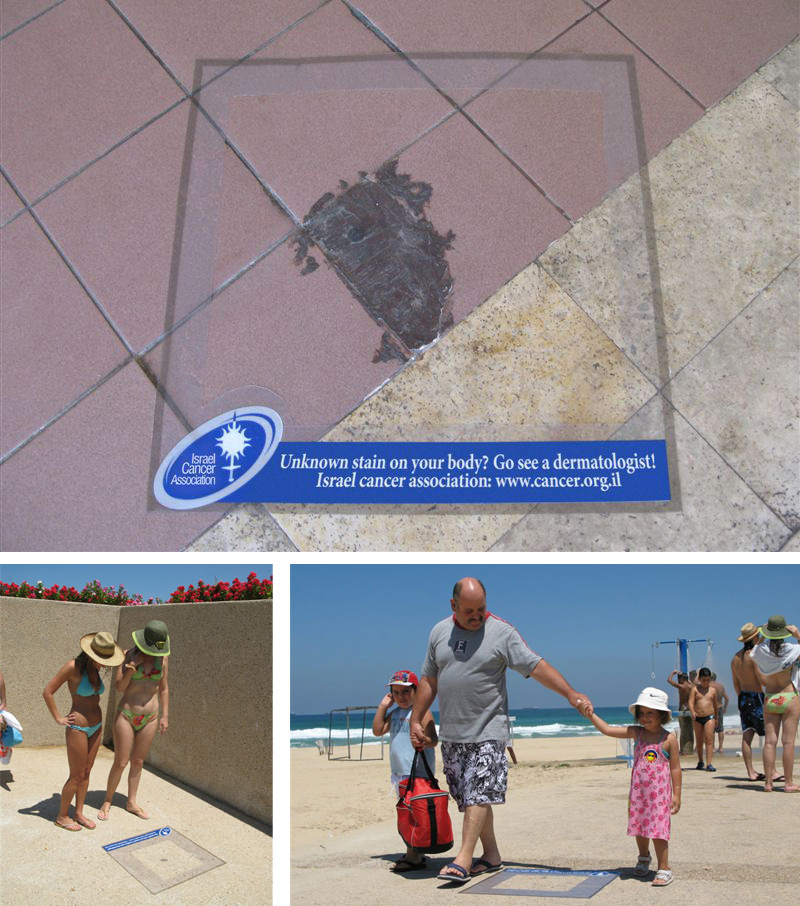 Message: If you see an unidentified stain on your body, go see a dermatologist. Israel cancer association. Background: Israel is the no. 2 state in the world with people suffering from skin cancer. Skin cancer can be discovered by a simple checkup for unusual spots and stains on one's body. In order to Increase public awareness for skin cancer and get people to go and get checked, we came up with a new creative solution, using the environment as the media. We found real stains on sidewalks near the beaches of Israel, and placed framed stickers around them. Thousands of people were exposed to the framed stains, all with the same surprised and overwhelmed reaction. Effect: If turning stains on sidewalks into a public awareness message isn't powerful, I don't know what is. Credit: Advertising Agency: GITAM/BBDO, Israel Chief Creative Director: Guy Bar Creative Director: Lior Raz Production: Daniel Eshel Published: July 2009 2. Lay's: Potatoes Installation 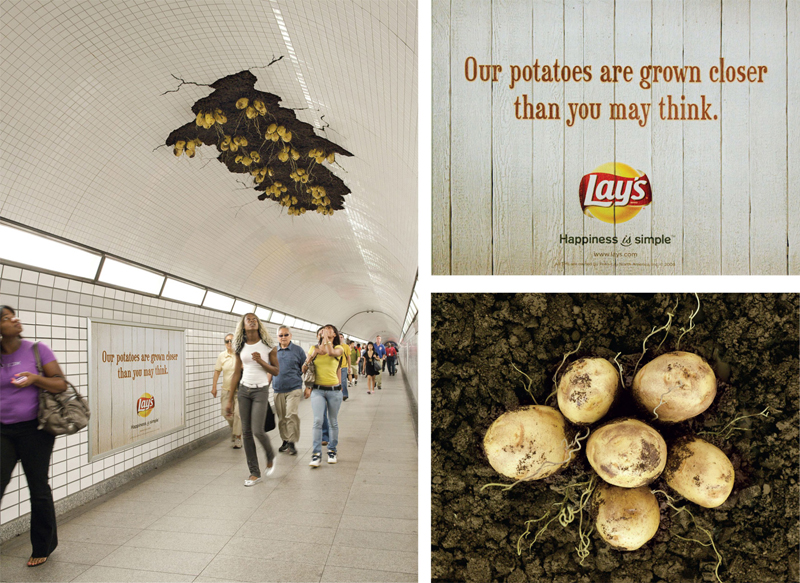 Background: Beginning July 27 and continuing for three weeks, passersby in Chicago's Jackson Tunnel are greeted with an out-of-home message, “Our potatoes are grown closer than you may think,” along with an overhead installation of potatoes breaking through the ceiling tiles. It's part of a nationwide campaign for Lay's potato chips that broke in May and which celebrates the local potato farmers who grow potatoes used in Lay's potato chips. The “Lay's Local” 360 marketing campaign was created by Lay's U.S. agency of record, Juniper Park. Other elements of the campaign, which debuted earlier, include TV, print, online, on-pack and in-store. Effect: What an awesome way to turn a boring tunnel into a fun experience. You can grow potatoes above my tunnel any day. (Wait. That didn't sound right.) Credit: Advertising Agency: Juniper Park, USA Chief Creative Officers: Alan Madill, Terry Drummond, Barry Quinn Associate Creative Director / Art Director: Hylton Mann Associate Creative Director / Writer: Andy Linardatos Producer: Debbie Ingham 3. Nikon D700: Paparazzi 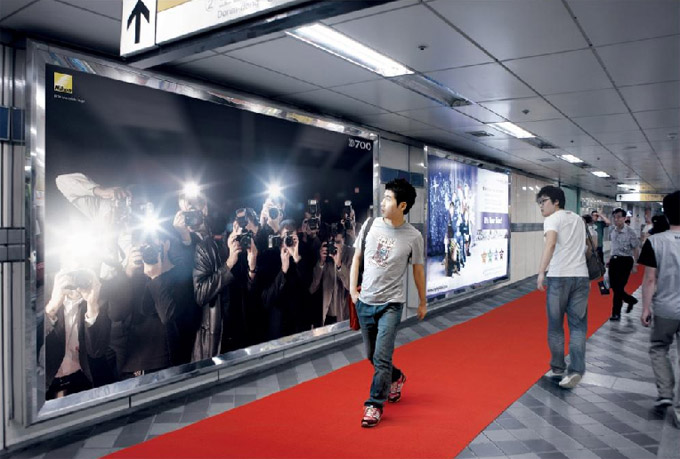 Background: A huge interactive light box was mounted in Seoul Sindorim Subway Station, the entrance way to a multiplex electronics shopping mall where various brands compete. Over 500,000 commuters use the station daily, making it the perfect place for an ad like this. Huddled together as if at a premiere, the paparazzi appear to be jostling and competing for the best celebrity shot. The celebrities, however, are the ones walking by the ad, they automatically trigger a deluge of flashing camera lights. The accidental superstars then follow the red carpet all the way out of the station and into a mall, where there's a Nikon shop conveniently located inside. Effect: An interactive ad that makes you feel like the star? Neat-o. 4. Clearex: Climb 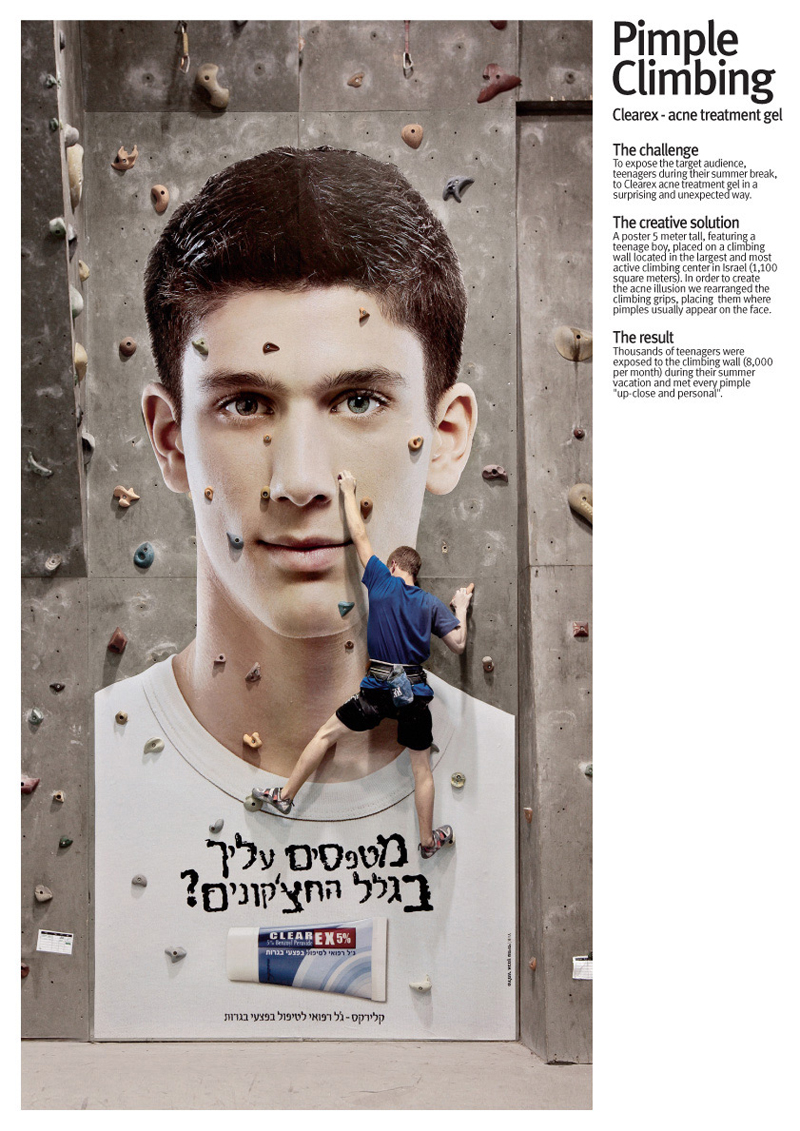 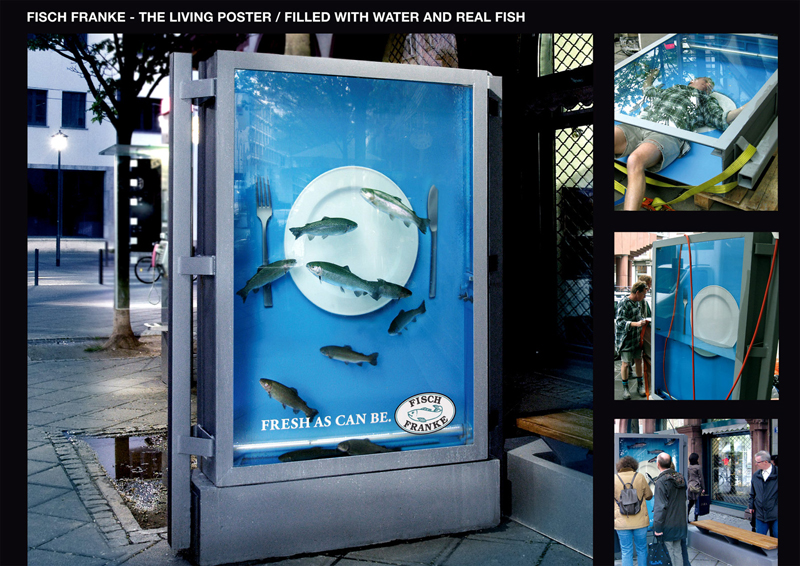 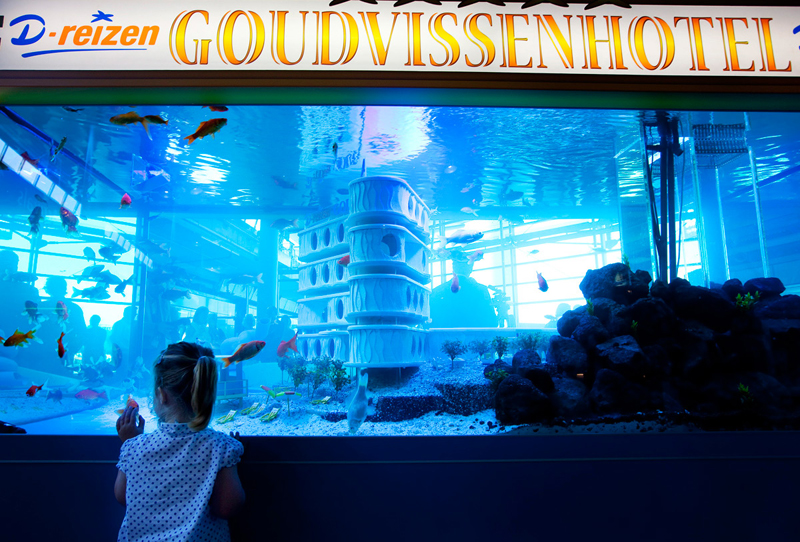 The world's first Goldfish hotel at Amsterdam airport Background: A solution to the ‘who will take care of the pet' problem has been found for some holidaymakers who fly out of Amsterdam Schiphol airport. Travel agent D-reizen is offering its customers to drop off their goldfish at a special hotel. The initiative is part of a campaign by the travel agent that uses fish in its advertising. The 5 sea star hotel – including a tennis court, a beach with its own beach guard and a pool with slide – is probably the ‘wet dream' of every goldfish on this planet. Effect: As part of your advertising campaign, my goldfish Herbert gets to live the good life? Sign Herbie up! (Just make sure he doesn't come back as sushi.) Credit: Advertising Agency: Doom&Dickson, Amsterdam, The Netherlands Creative Directors: Antoine Houtsma, Bart Oostindie Producer hotel: Paddocklive Released: June 2009 7. Ikea: Staircase 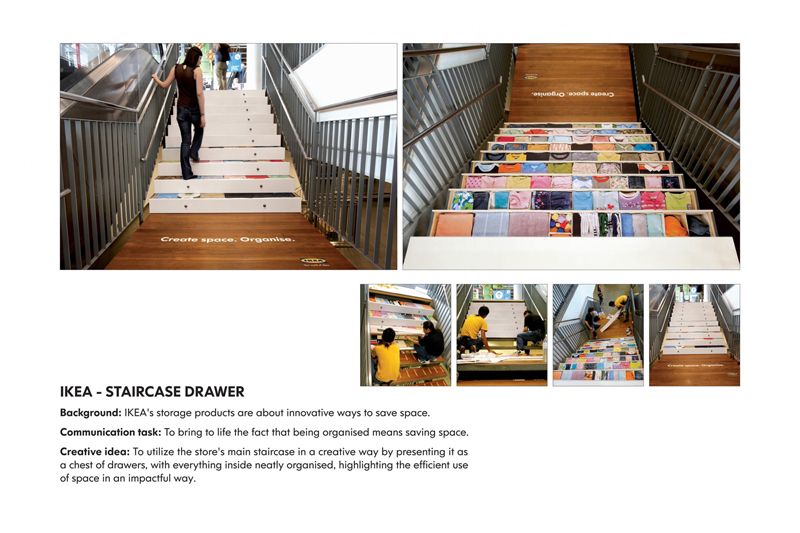 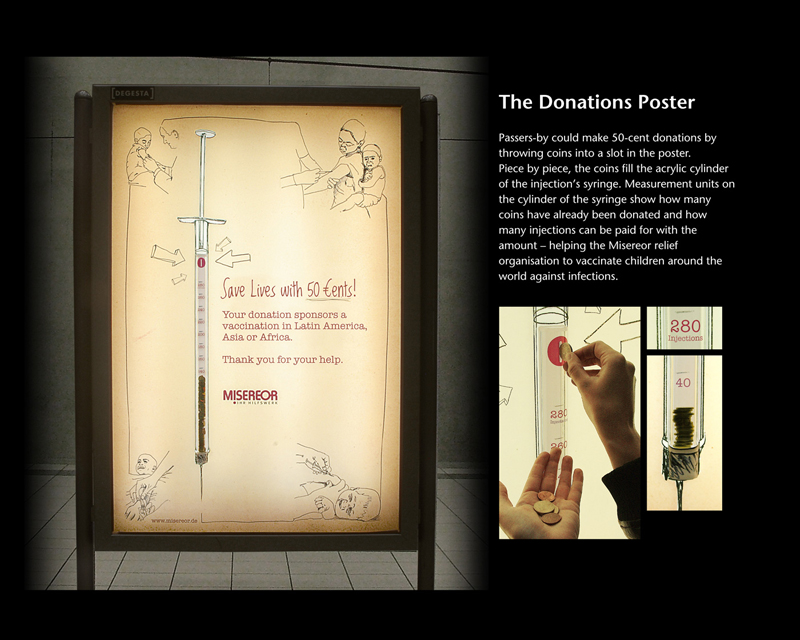 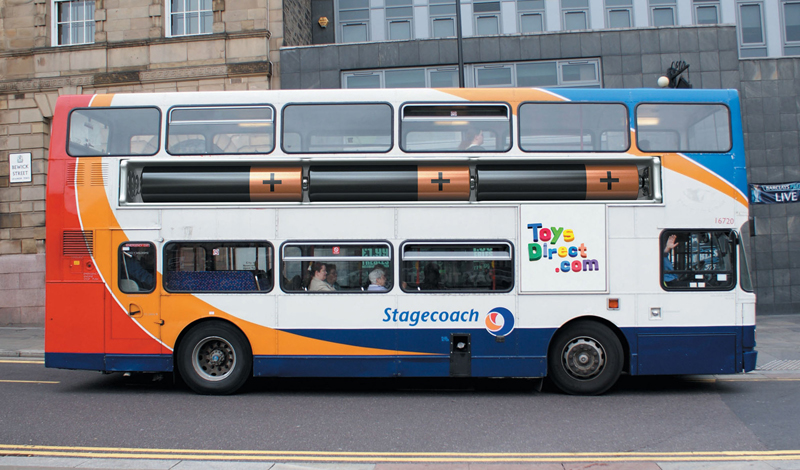 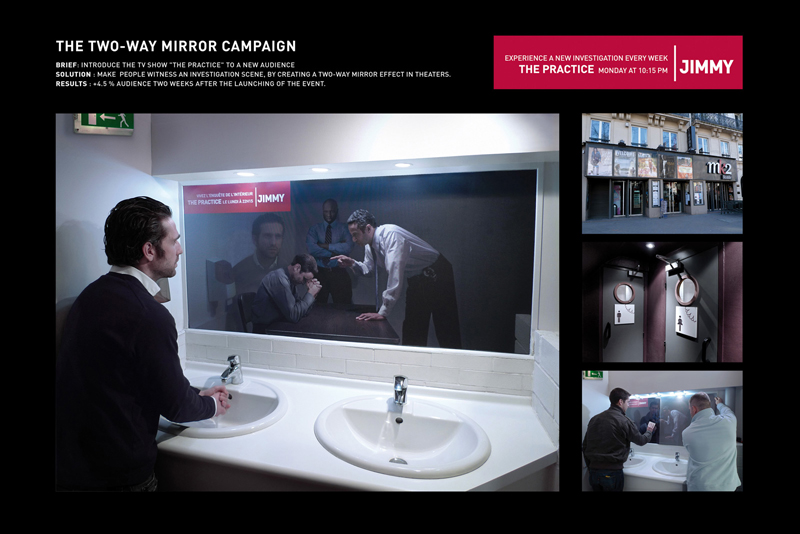 Effect: Make me feel like I'm a part of the investigative team while I'm in, of all places, the bathroom? Genius! Credit: Advertising Agency: Marcel Paris, France Creative Directors: Anne de Maupeou, Frederic Temin Art Director: Alexandra Offe Copywriter: Vanina Guillier Published: March 2009 Which is your favorite? [Via Ads of the World]