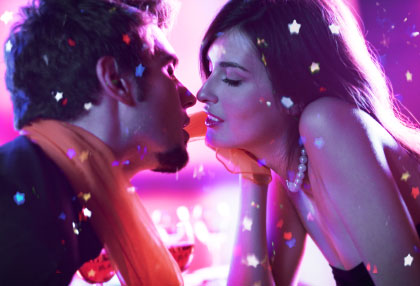 Still thinking about what your best options are for New Years? We're rounding up some of the best parties in and out of town. Here's theMET's suggestions on how you should ring in 2009. FOR PEOPLE WHO WANT TO RING IN THE NEW YEAR WITH THOUSANDS OF FRIENDS! GIANT – DOWNTOWN LA

If these names make you want to shake your booty, this is your kind of party: Moby, Paul Oakenfold, Benny Benassi, Dirty South, Mark Farina, Marques Wyatt and Mickey Avalon. This awesome group of DJs and more will perform under 3 climate controlled big top areas on a 7-acre private site that can hold up to 10,000 people. This would qualify under that term, “massive” so be prepared to brave huge crowds. Our take: A great line-up as long as you're ok partying it up with thousands of others. When: December 31, 2008 (7 PM – 4 AM) Price: $65 Where: 835 Francisco St. Los Angeles, CA 90017 Tickets and more info at Giant's website TOGETHER AS ONE – LA SPORTS ARENA 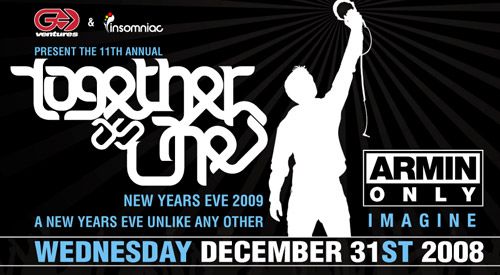 Insomniac is happy to once again be a part of presenting America's biggest New Year's Eve party! Last year, over 50,000 revelers joined them in the LA Sports Arena to ring in the new year and this year is shaping up to be even bigger. Armin Van Buuren, The Number 1 DJ in the World, will be presenting a very special 9 hour performance as part of his Armin Only: Imagine world tour. Also on hand will be one of the hottest new stars on the global dance music scene including Deadmau5! Our takes: Armin rocks but for 9 hours you better love him. Same as Giant, expect HUGE crowds. When: Wednesday, December 31, 2008 (8 PM – 4 AM) Where: La Sports Arena, 3939 S. Figueroa Blvd.Los Angeles 90037 Price: General Admission Pre-sale Tickets begin at $50, then clhttp://www.mymodernmet.com/profiles/blog/previewSubmitimbing steadily to $70, VIP Pre-sale Tickets are available for $100 and $150 Tickets and more info: New Years LA website FOR PEOPLE WHO WANT TO TREK ON OVER TO LAS VEGAS FOR A MINI-VACA: PALMS CASINO – LAS VEGAS 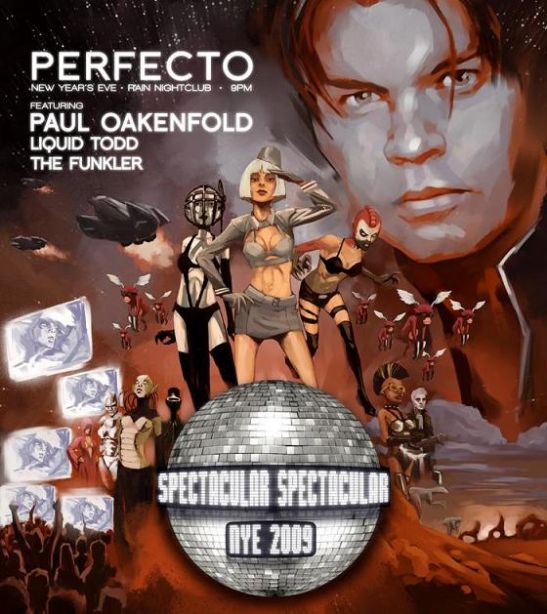 If you're in LA hop on over to Sin City to see the one and only Paul Oakenfold spin the night away at the ever crowded Rain. The Palm hotel has four raging parties happening in their hotel that night with Kid Rock at the Playboy Club. Our take: See Oakenfold before he goes into retirement. He's an old staple in the scene but one you definitely want to check out. When: Wednesday, December 31, 2008 (10 PM – 4 AM) Where: Rain, Palms Casino, 4321 W. Flamingo Road, Las Vegas Price: Starting at $125 Tickets and more info: Palm's website FOR PEOPLE WHO CALL ELECTRONIC MUSIC TECHNO AND THINK IT'S NOISE LE-DEUX CAFE – LOS ANGELES 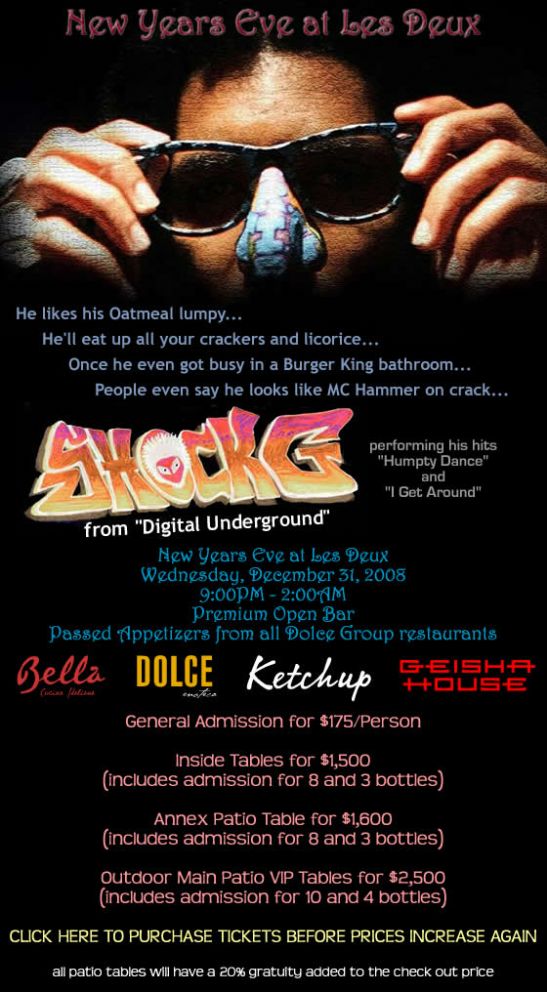 Last year's New Year's party at Les Deux drew the likes of Mickey Avalon, Perry Farrell, Dirt Nasty aka Simon Rex for a rambunctious party of epic proportions, so don't expect anything less for this year's extravaganza. Tickets are $125, but the rest of your night is free since it includes an open premium bar and passed appetizers from Dolce Group Restaurants including Dolce Enoteca, Geisha House, Ketchup and Bella Cucina Italiana all night. Our take: Prices are pretty steep so just make sure to eat up as many appetizers as possible! When: Wednesday, December 31, 2008 (9:00 PM – 2:00 AM) Where: Les Deux Cafe Los Angeles CA, 1638 N. Las Palmas Ave,, Los Angeles CA Tickets: $175 – OPEN PREMIUM BAR (9pm – 2am), Tables from $1,500+ Tickets and more info: Clubzone FOR THOSE PEOPLE WHO HAVEN'T SEEN DJ AM LIVE THE LOT WITH DJ AM AND TRAVIS PARKER – THE LOT LOS ANGELES 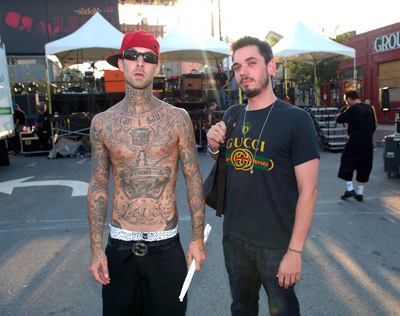 Conveniently located in the heart of West Hollywood, the Lot is widely known for its star-studded movie premieres and first-class events. The 35,000 square foot plaza will be tented and transformed into a high end, high tech party playground, which will feature state-of-the-art sound and lights, inviting dcor, impeccable service and an impressive menu crafted by top chef, Gary Arabia, owner of Global Cuisine Catering. Enjoy a premium open bar all night long and ring in 2009 with Travis Barker and DJ AM as their set streams live from Los Angeles to every New Year's Nation venue across the country. With two turntables and a full drum kit, drummer impresario TRAVIS BARKER and world class DJ AM expose music enthusiasts to a threatening new performance style. While captivating audiences at every show, AM and TRAVIS combine anything from hip-hop to rock to 80s tunes. NO genre goes untouched. Our take: A mid size party with some booty dancing music plus a chance to see DJ AM and Travis Parker reunited? Cool. When: Wednesday, December 31, 2008 (8:30 PM – 2:00 AM) Where: 1041 North Formosa Avenue West Hollywood , CA 90046 Price: $150 GA/$225 VIP Tickets and more info: newyears.com PEOPLE WHO WANT TO DRESS UP AND HANG OUT AT A HOT SPOT IN LA APPLE LOUNGE HOSTED BY LA CONFIDENTIAL MAGAZINE – WEST HOLLYWOOD 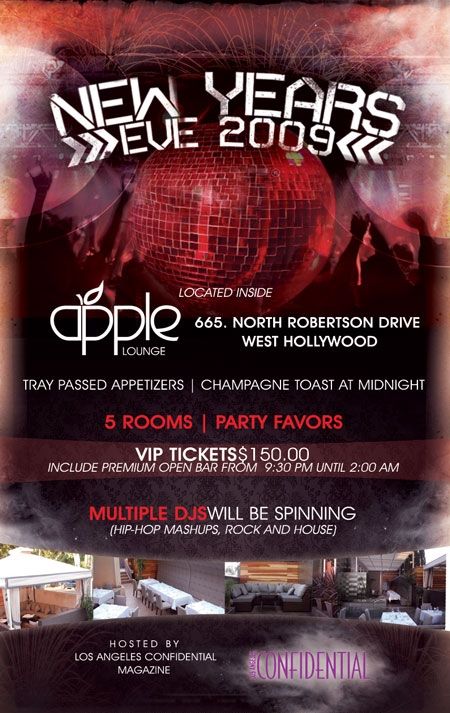 With five rooms and a giant outdoor patio, Apple is one of Hollywood's newest hotspots. Each General Admission ticket will include entrance for one person as well as Premium Open Bar and Tray passed Appetizers from 9:30 PM until 2:00 AM. Party Favors and Champagne Toast are also included. Table Packages are also available with Bottle Service. When: Wednesday, December 31, 2008 (9:30 PM – 2:30 AM) Where: 665 N. ROBERTSON BLVD., West Hollywood, Los Angeles Price: $150 VIP Tickets and more info: Dose website The NAUTILIST BALL AT EDISON – DOWNTOWN LOS ANGELES 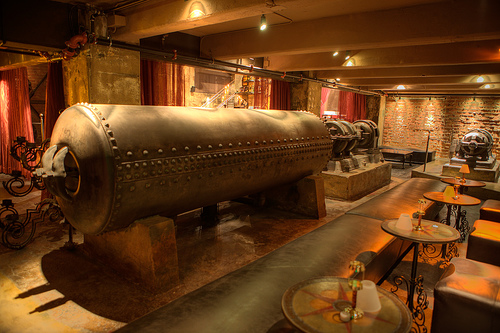 Ladies & Gents! Inventors, philosophers, scholars, adventure seekers and mad scientists of the world! It is with a most fevered spirit and sheer unbridled enthusiasm that we present to you our 1st annual Nautilist Ball. An odyssey of futures past, a celebration of ambition and dreams, an evening of pure possibility! LIVE MUSIC and DANCING – CONTINUOUS PERFORMANCES – OPEN PREMIUM BAR – MIDNIGHT CHAMPAGNE TOAST – LAVISH DESSERT SPREAD AND MORE! Our take: If you haven't experienced Edison now's the time. One of the most unique spots in LA to ring in the new year. When: Wednesday, December 31, 2008 (9 PM – ?) Where: 108 W. 2nd St. #101, Los Angeles, CA 90012 Price: TBD Event Phone Number: 213-613-0000, http://www.edisondowntown.com PEOPLE WHO PREFER CHIC HOTEL PARTIES OVER RAGING MASSIVES OM RECORDS PARTY with King Britt, Jason Bentley, Garth Trinidad and more at Whist, Viceroy 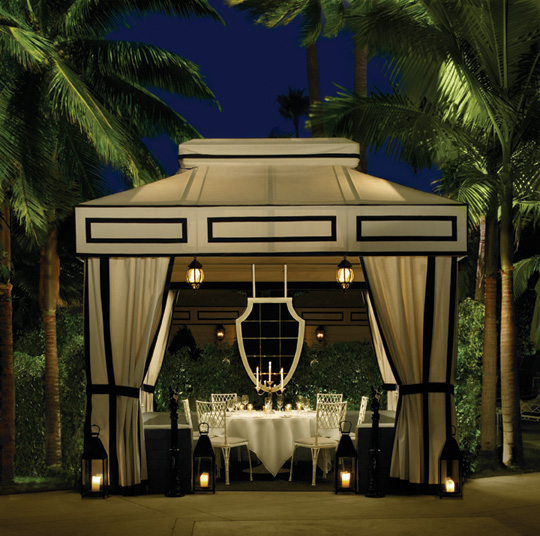 Viceroy Santa Monica and Om Records present an unforgettable New Year's Eve Soiree under the stars with drinks and dancing. Our take: Great if you want something low-key and classy. When: December 31, 2008 (8 PM) Where: 1819 Ocean Ave. Santa Monica, CA 90401 Price: $175 pre-sale/$195 at the door Tickets and more info: Viceroy website THE STANDARD HOTEL HOLLYWOOD 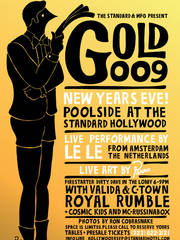 Ring in the New Year at L.A.'s prime party for people who care what other people think of them. Man about town DJ Dirty Dave will be spinning the pre-party downstairs until 9 p.m., and the evening climaxes with a performance from Le Le, billed helpfully as “from Amsterdam, the Netherlands.” Our take: For the Hollywood scenester who's too cool for crowds, this is your place. When: December 31, 2008 (9 PM – 2 AM) Where: The Standard Hollywood, 8300 Sunset Blvd. West Hollywood, CA 90069 Price: $25 presale, $35 door Tickets and more info: 323-822-3121, [email protected] ROOSEVELT HOTEL – LOS ANGELES 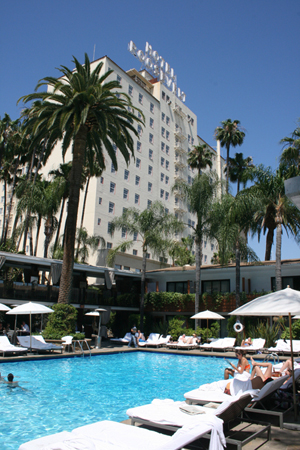 Bloc Party, Andy Caldwell and Mei Lwun at the Roosevelt Hotel! Clubbers are dying to get into the Hollywood Roosevelt, ever since celebrity starlets like Lindsay Lohan and Paris Hilton have been spotted partying there. That's why it's third annual New Year's Eve bash featuring Bloc Party, Andy Caldwell and Mei Lwun is going to be off the hook. And isn't comforting to know that if things get too gnarly, there's a hotel room with your name all over it. Get there early to munch on complimentary hors d'oeuvres before the fashionably late show up, from 8 p.m.-10 p.m. Our take: One of the coolest hotels in LA with an old school vibe. It's sure to be a hot spot on NYE. When: December 31, 2008 (8 PM – 3 AM) Where: The Hollywood Roosevelt, 7000 Hollywood Blvd., Los Angeles, CA 90028 Price: $100 Tickets and more info: Groovetickets