The Sartorialist Book By Scott Schuman 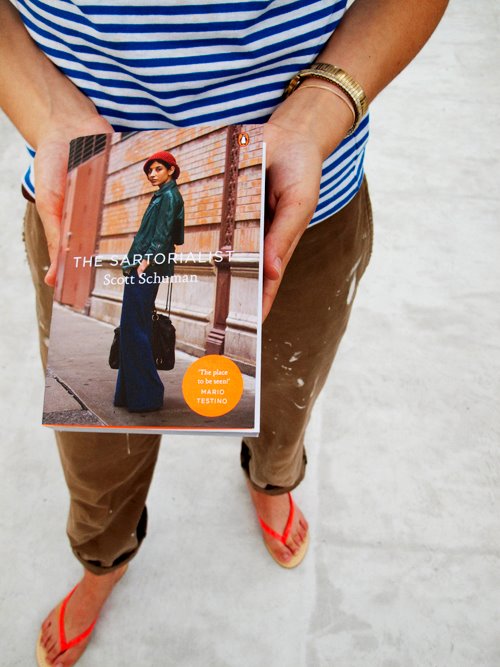 A big congrats goes out to Scott Schuman, blogger/photographer/trendsetter, for his book deal with Penguin. The Sartorialist book will be available in printed paperback and a limited-edition hardcover version. Get ready for over 500 pages of style! The paperback

will cost you $16.50 at Amazon (this retails for $25) and $110.25 for the hardcover (retails for $175). The books will be available in the US August 12th and worldwide by early September. And just in case you haven't heard of Scott Schuman and The Sartorialist, here's a brief description from Penguin: Scott Schuman just wanted to take photographs of people that he met on the streets of New York who he felt looked great. His now-famous and much-loved blog, thesartorialist.com, is his showcase for the wonderful and varied sartorial tastes of real people across the globe. This book is a beautiful anthology of Scott's favorite images, accompanied by his insightful commentary. It includes photographs of well-known fashion figures alongside people encountered on the street whose personal style and taste demand a closer look. From the streets of New York to the parks of Florence, from Stockholm to Paris, from London to Moscow and Milan, these are the men and women who have inspired Scott and the many diverse and fashionable readers of his blog. After fifteen years in the fashion business, Scott Schuman felt a growing disconnect between what he saw on the runways and in magazines, and what real people were wearing. The Sartorialist was his attempt to redress the balance. Since its beginning, the blog has become hugely admired and influential in the fashion industry and beyond. Thesartorialist.com is consistently named one of the top blogs in the world. A self-taught photographer, Schuman shoots for publications including French Vogue, American GQ, Fantastic Man and Elle, and a growing list of advertising clients. Scott has also shown his work at the New York photo gallery The Danziger Projects and appeared in the GAP Style Icon campaign in the fall of 2008. He has been named the number one fashion photography trend by American Photo magazine, as well as one of Time magazine's top 100 design influencers. “More people notice me in The Sartorialist column than in any other publication or website. Obviously the place to be seen!” –Mario Testino Scott doesn't just take pictures, he captures emotion. He is not just a photographer. He's a historian marking the feelings of this generation one photo at a time. –Kanye West During all the fashion weeks I am approached by many photographers, Scott is the only one who can ask me to cross the street for better light and I do it! I love his portraits. –Carine Roitfeld, editor of French Vogue Everybody loves being photographed by Scott Schuman. If he spots you in the crowd, whether in New York or Paris or Milan, it's a kind of validation. And everybody likes to see who he has photographed for The Sartorialist, because it's proof of his critical eye. –Cathy Horyn, The New York Times I'm ordering mine now! Link: The Book Has Arrived!