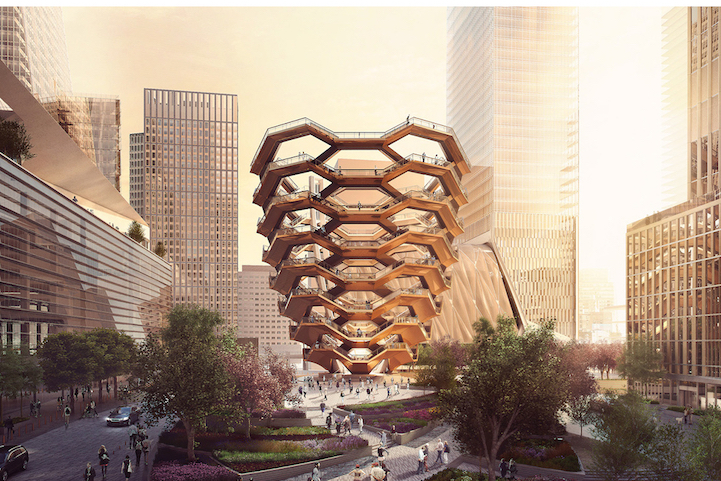 British architect Thomas Heatherwick recently unveiled plans for a giant staircase, composed of 154 intertwining flights with 80 landings, for New York's Hudson Yards. Dubbed Vessel, Heatherwick's honeycomb design seems like one of MC Escher's mind-blowing drawings come to life. The architect's inspiration came from an abandoned staircase that caught his eye at a construction site as a student. “It caught my imagination and I loved that it was part furniture and part infrastructure. you could climb up stairs, jump on them, dance on them, get tired on them and then plonk yourself down on them. Years later, suddenly here was an opportunity to make a new kind of landmark for hudson yards. We wondered whether it could be built entirely from steps and landings?”

Equal parts adult jungle-gym and elevated viewing platform, the copper-toned structure will take an estimated two years to complete, with pieces manufactured in Italy and assembled on-site.  The base measures 50 feet in diameter, opening to 150 feet at the top ring. As the focal point of the square and gardens designed by landscape architects Nelson Bryd Woltz, Vessel is a functional public art piece allowing for public interaction. Rising from the lush greenery of five acres of plazas, which includes a 200-foot fountain mimicking a river, Heatherwick focused in on the connectivity between humans as they buzz through the structure. “We saw this as a building made from staircases,” Heatherwick shares with designboom, “There was nothing to commemorate here, and having something that creates a physical engagement creates a chemistry between us. You would probably go a different route than I would. There’s a sort of unspoken choreography as you see each other, in seeing and being seen, and an almost stitched in humor. If something is an unfamiliar experience it draws out different responses from people that can trigger another layer of ways people respond to each other.”

Just how will the finished structure be used by New Yorkers? Ultimate selfie location? World's largest stair master? It remains to be seen, but the world will be watching. 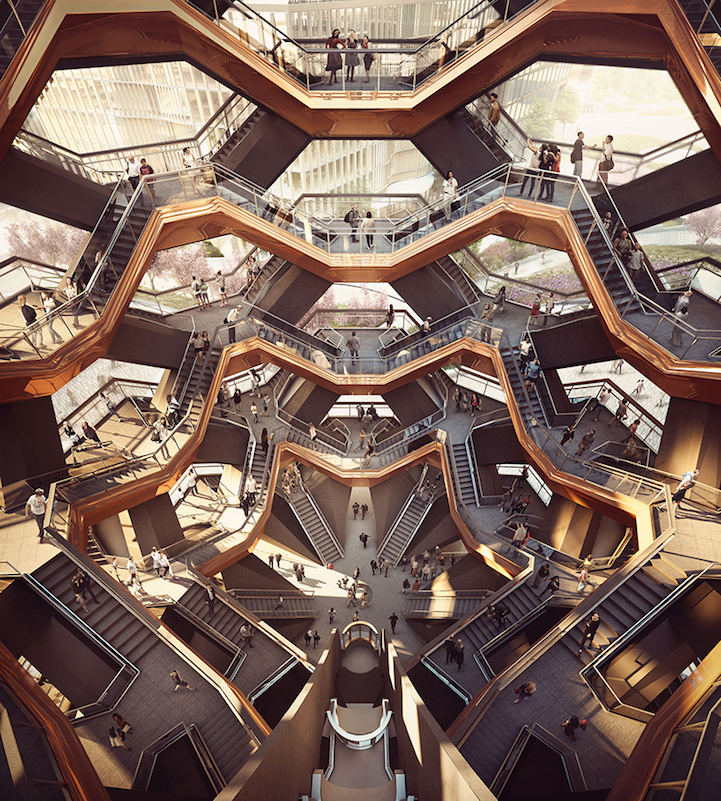 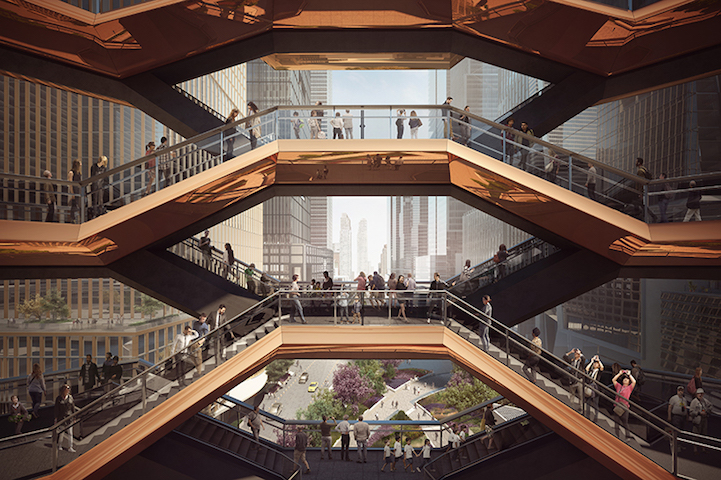 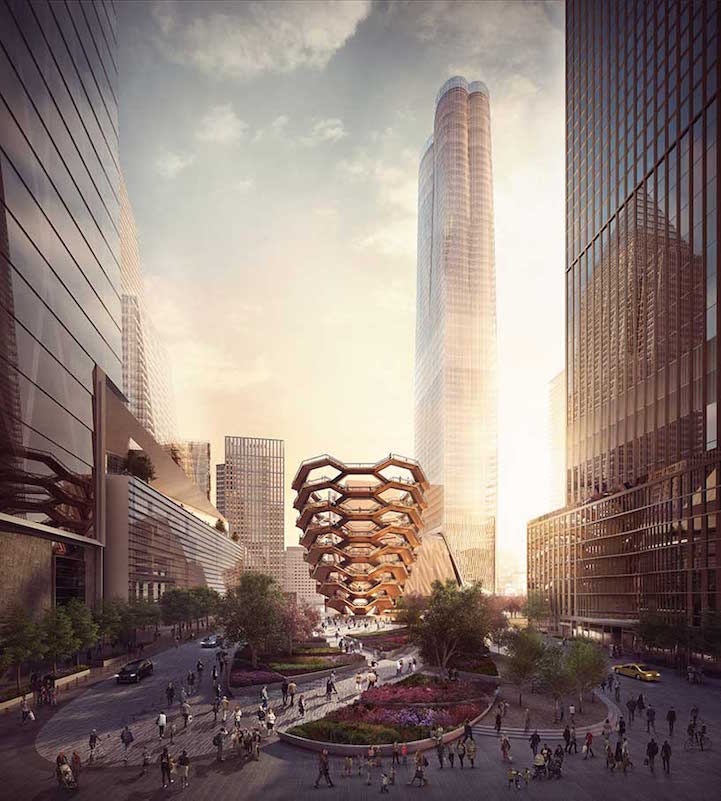 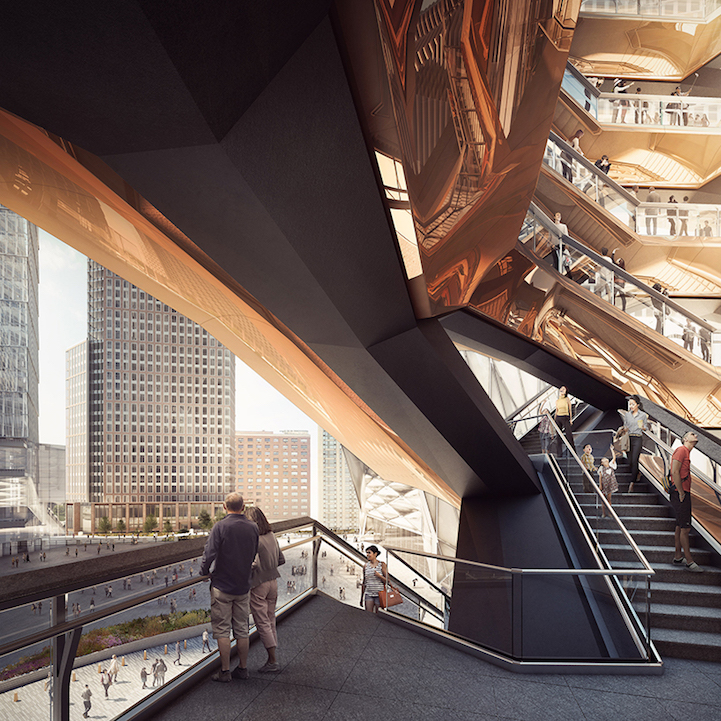 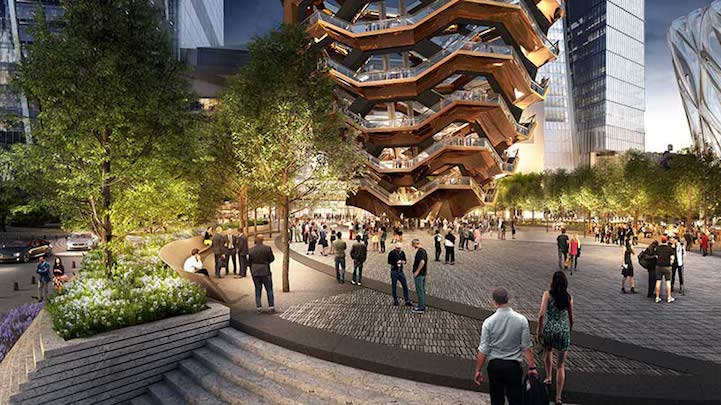