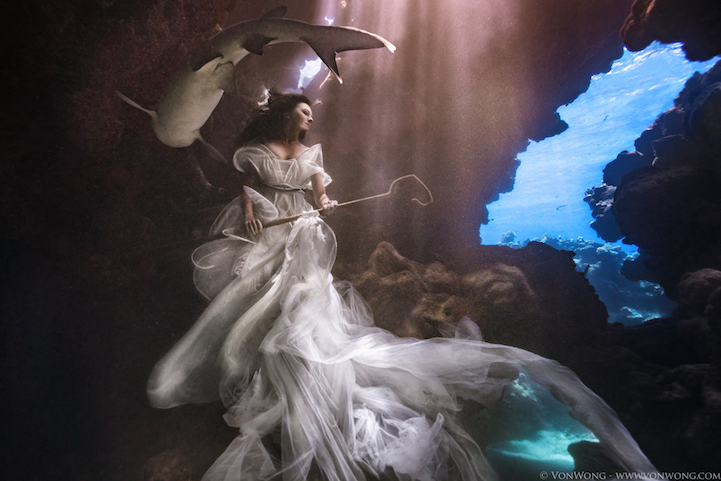 You know that photographer Benjamin Von Wong likes to challenge himself when he remarks that “shooting a model with sharks was even more complicated than shooting models in an underwater shipwreck.” The adventure-loving creative recently completed his series Shark Shepherd, in which an ethereal woman swims with sharks below the sea. Although Von Wong's surreal images look like they were composed in Photoshop, everything about the project is very real: the photographer tethered the model underwater as the giant fish swam all around her.

Von Wong traveled to the South Pacific island of Fiji, known for its world-class shark dives, to pull of this daring shoot. He partnered with Tourism Fiji and the Barefoot Collection who provided him with a full team of support divers as well as an in-house marine biologist and shark expert. 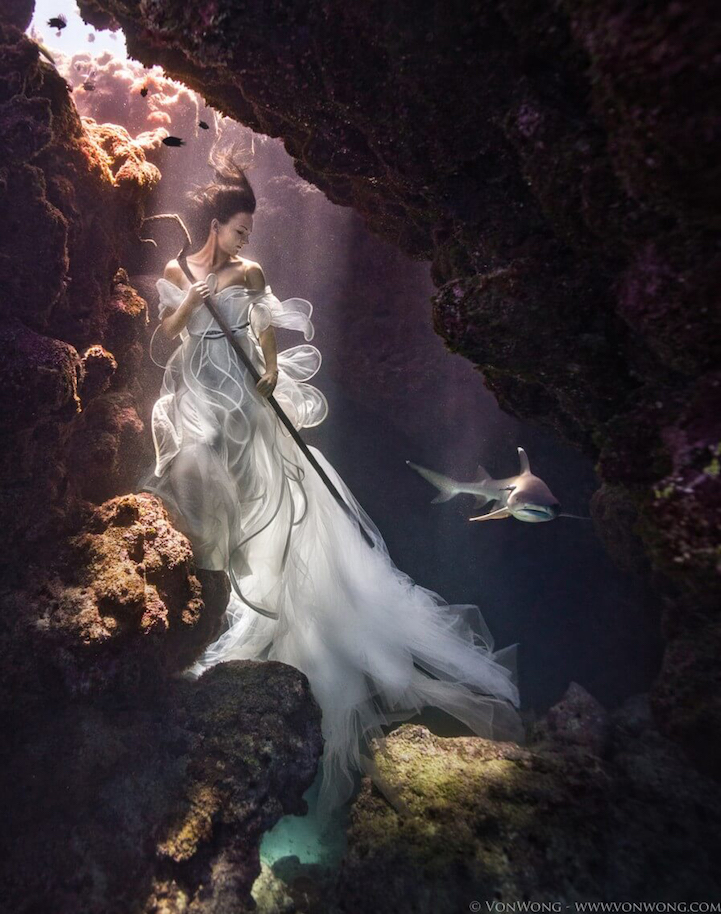 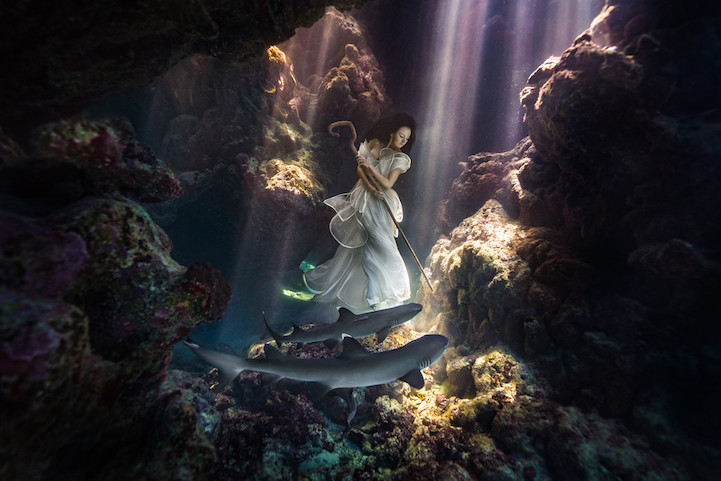 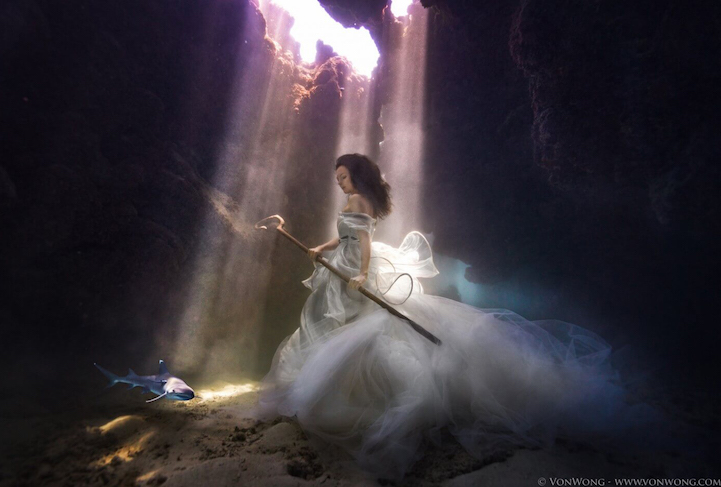 Over the course of three days, the crew battled limited oxygen and a short window in which to shoot–they only had two hours per day where the sharks would be active and the light visible.  For each photograph they would weigh down their champion free diver, Amber Bourke, onto a perfectly-lit rock formation. Her dress, designed specifically for this series, had to be carefully placed so that it would nicely flow in the composition.

After positioning Bourke, Von Wong and team would wait until the sharks were in perfect formation. This proved harder than expected. “Similar to squirrels at a park, the white tipped reef sharks would hover around us curiously only to scamper off if anyone got too close,” the photographer explained on his blog. He continued, “Once one of them got deep enough into the cave and we thought there was a good chance of us capturing a shot, Amber would take a deep breath, rip off her mask and strike a couple of poses for as long as she could.” 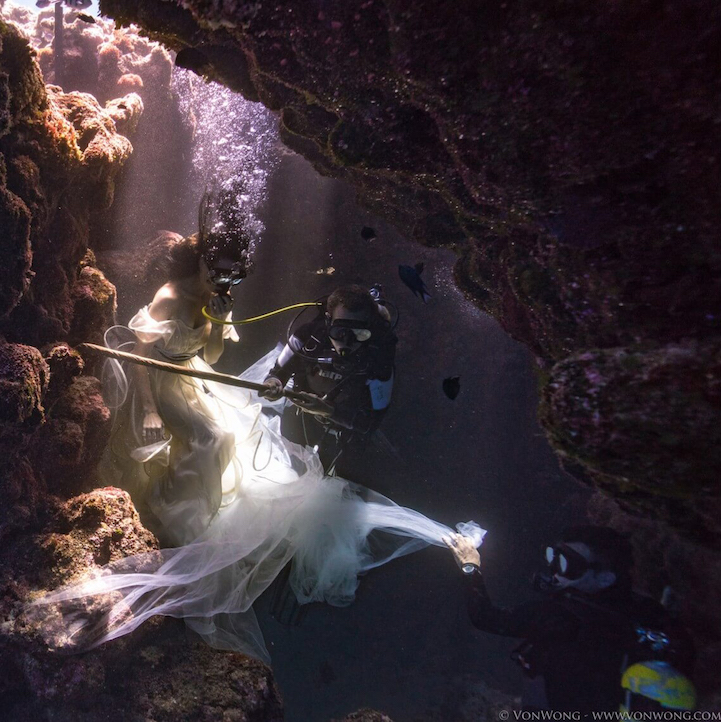 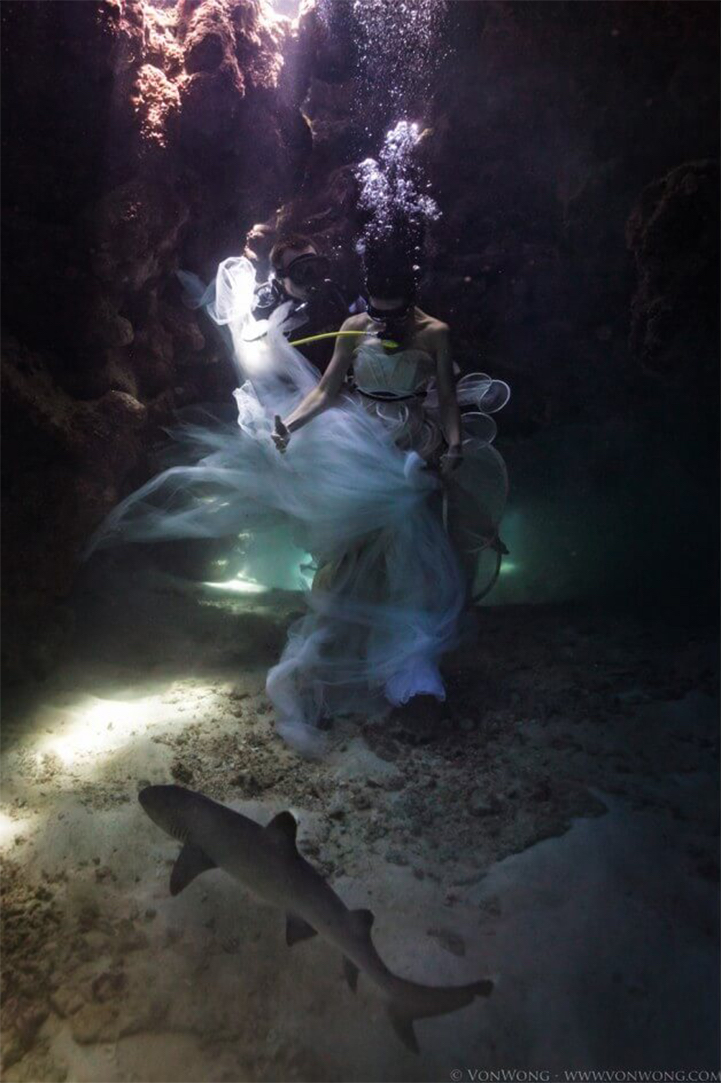 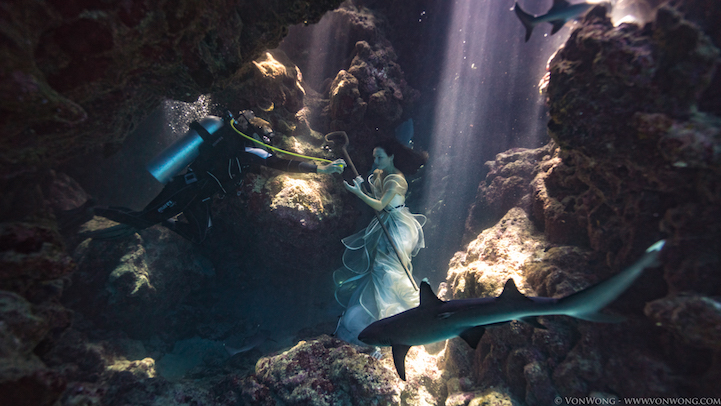 The Shark Shepherd was about more than just capturing exquisitely imaginative scenes. Von Wong strives to create meaningful work, and he used this project as an opportunity to promote the creatures' beauty while advocating for their protection. “Sharks are almost always depicted as menacing and terrifying, yet it is humans that are responsible for killing them in the millions just to make soup,” he said. “I wanted to create a series of images that would help break those stereotypes and show that it is possible for us to co-exist together in perfect harmony.”

In an email, Von Wong told us: “For me, this was one of the most gratifying projects that I have ever had the chance to participate in. It is one thing to overcome the technical difficulties of shooting underwater with sharks, but another to know that my work can help make a difference in the world. I believe that if people come together for a cause, they can truly make a difference. This petition is just a first step and I hope to work on many more projects like this in the years to come. If any readers here know of any worthy causes, please reach out.”