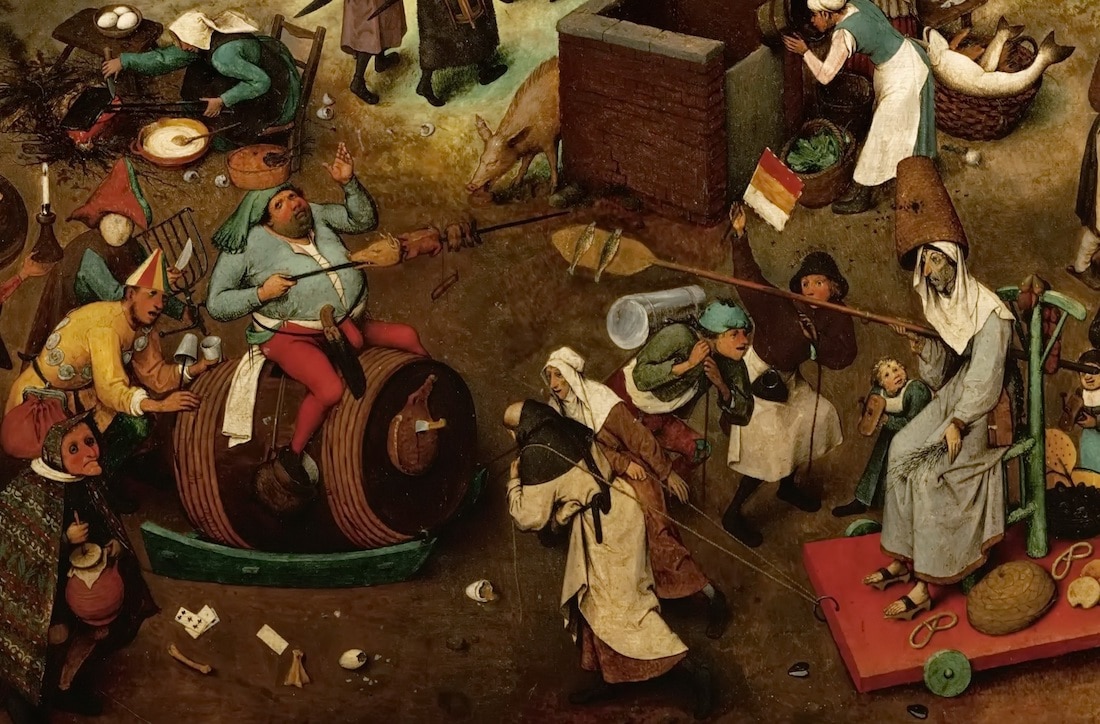 The portfolio of Pieter Bruegel the Elder is a highlight of the Northern Renaissance. Packed with seemingly ordinary subject matter and set in everyday locations, his 16th-century paintings and prints give us a glimpse of contemporary life in the Low Countries. What sets these pieces apart from the work of his equally detail-oriented peers, however, is his use of symbolism, a clever approach that makes masterworks like The Fight Between Carnival and Lent more than meets the eye.

Completed in 1559, this oil-on-panel painting illustratively explores the push and pull between the holy season of Lent and the festive Carnival period that precedes it. More than a study of a liturgical season, however, The Fight Between Carnival and Lent offers commentary on human nature—a deeper theme present in much of Bruegel's oeuvre.

Who was Pieter Bruegel the Elder? 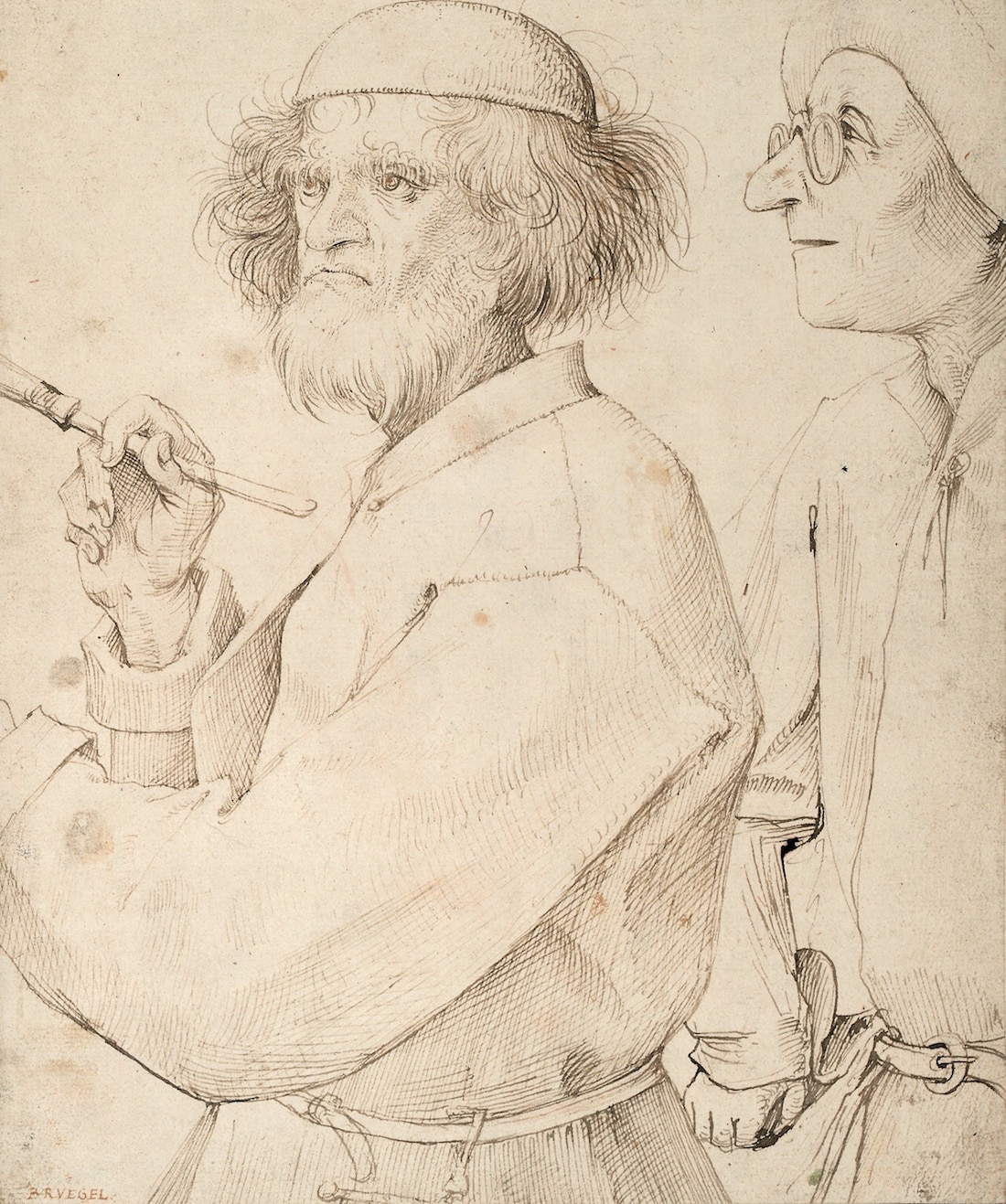 Little is know about Bruegel's life. Historians believe he was born between 1525 and 1530 in or around Breda (a city in the Southern Netherlands) and died in 1569. During his short life, he lived and worked in Antwerp (in 1551, he entered the Antwerp painters' guild), Brussels, and Rome. Unlike other Northern artists who visited Italy at this time, Bruegel did not incorporate Italian influences into his practice. From his attention to minute detail to his interest in proverbial symbolism, his work remained true to his Netherlandish roots.

Unlike his Dutch peers, however, Bruegel did not strictly portray religious subject matter. In fact, even when exploring Christian or moral iconography, he would often imagine it within a contemporary context, as evident in The Fight Between Carnival and Lent.

The Fight Between Carnival and Lent 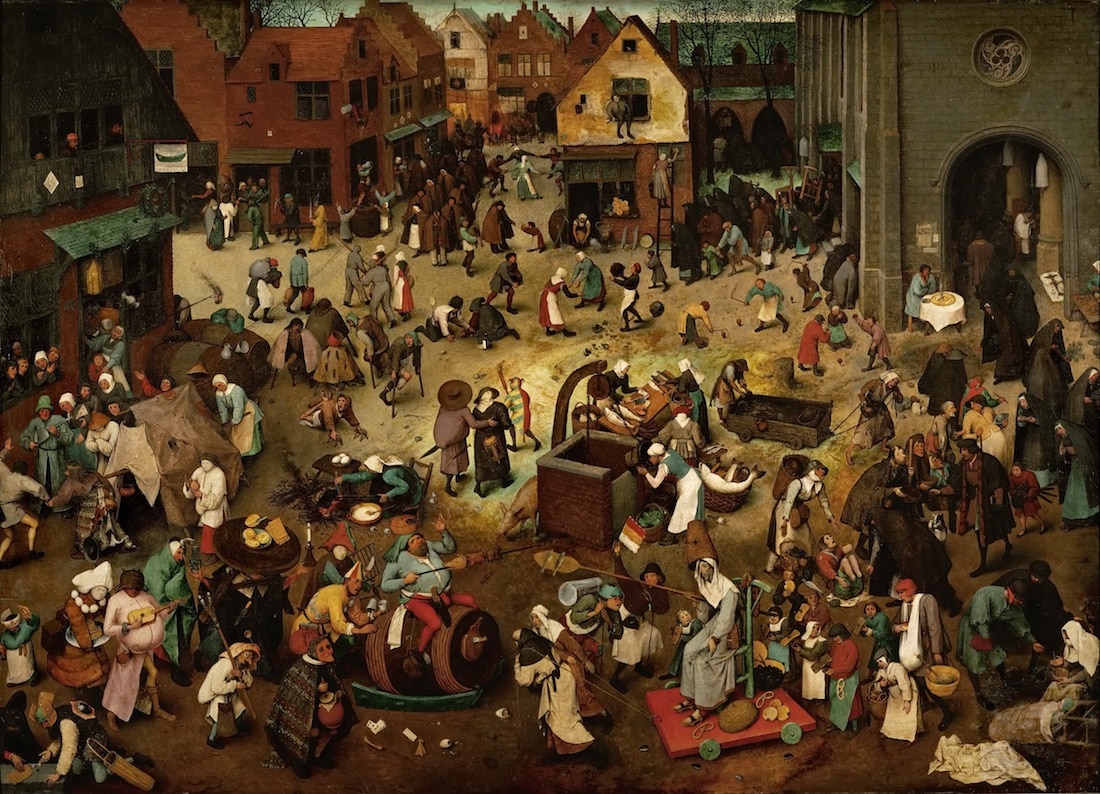 Bruegel painted The Fight Between Carnival and Lent while living in Antwerp in 1559. At this time, his interest in depicting contemporary communities was on the rise, culminating in some of his most well-known canvases, like Children's Games and The Dutch Proverbs. Like Children's Games, The Fight Between Carnival and Lent is set in a sprawled out city square filled with people. And, like The Dutch Proverbs, this painting is full of symbolism. Together, these characteristics enable Bruegel to explore a real-life event—the transition from Carnival to Lent—in an allegorical way. 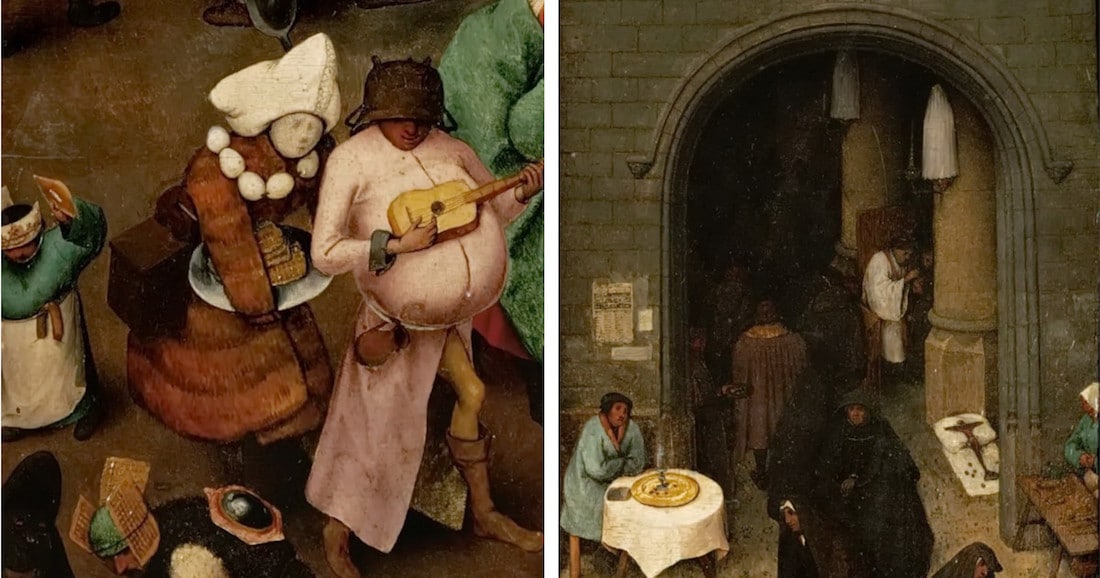 What is Carnival? Carnival is the period of time that commences on Epiphany (the twelfth day of Christmas) and ends with Mardi Gras (the day before Ash Wednesday). Ash Wednesday, in turn, marks the start of Lent, a 40-day observance that concludes with Easter. As Lent is seen as a solemn time, Carnival serves as a way for Christians to feast and celebrate before fasting from meat—one of Lent's major sacrifices—and reflecting.

The Fight Between Carnival and Lent occurs on the cusp of Carnival and Ash Wednesday. Throughout the scene, several Carnival traditions can be spotted. In the center of the composition, women prepare fish, which is traditionally eaten on Fridays during Lent. In the foreground, a vendor sells waffles, a customary Lenten food in the Netherlands. And, inside the church's open door, statues are covered in cloaks, as, according to Roman Catholic tradition, art is to be concealed until Easter Sunday. 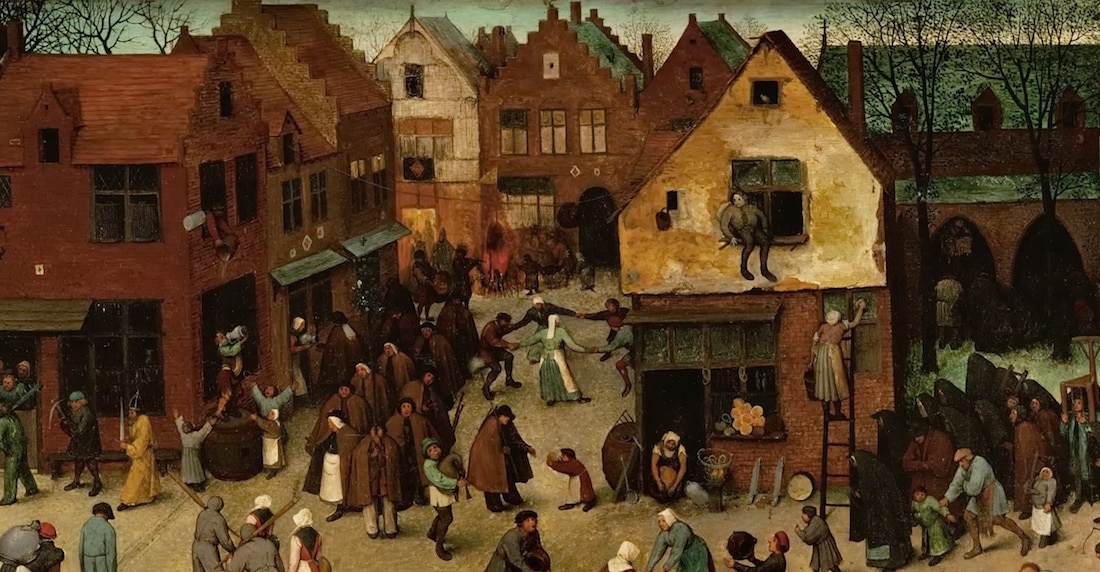 Much more than a straightforward snapshot of Carnival, several elements of The Fight Between Carnival and Lent serve as metaphors—even the setting itself. The painting takes place in a town square that straddles two sites: an inn (on the lefthand side of the canvas) and a church (on the right). Set before wintry trees bearing no leaves, the inn represents Carnival. Likewise, the church—which has blossoming trees in its spring-like courtyard—stands for Lent.

While drunk merrymakers spill out of the inn, cloaked pious figures emerge from the church. In the center of the canvas, however, the two parties meet and mix. This culminates in a “fight” between the two periods, which are each represented by clever personifications appearing to joust.

The Figure of Carnival 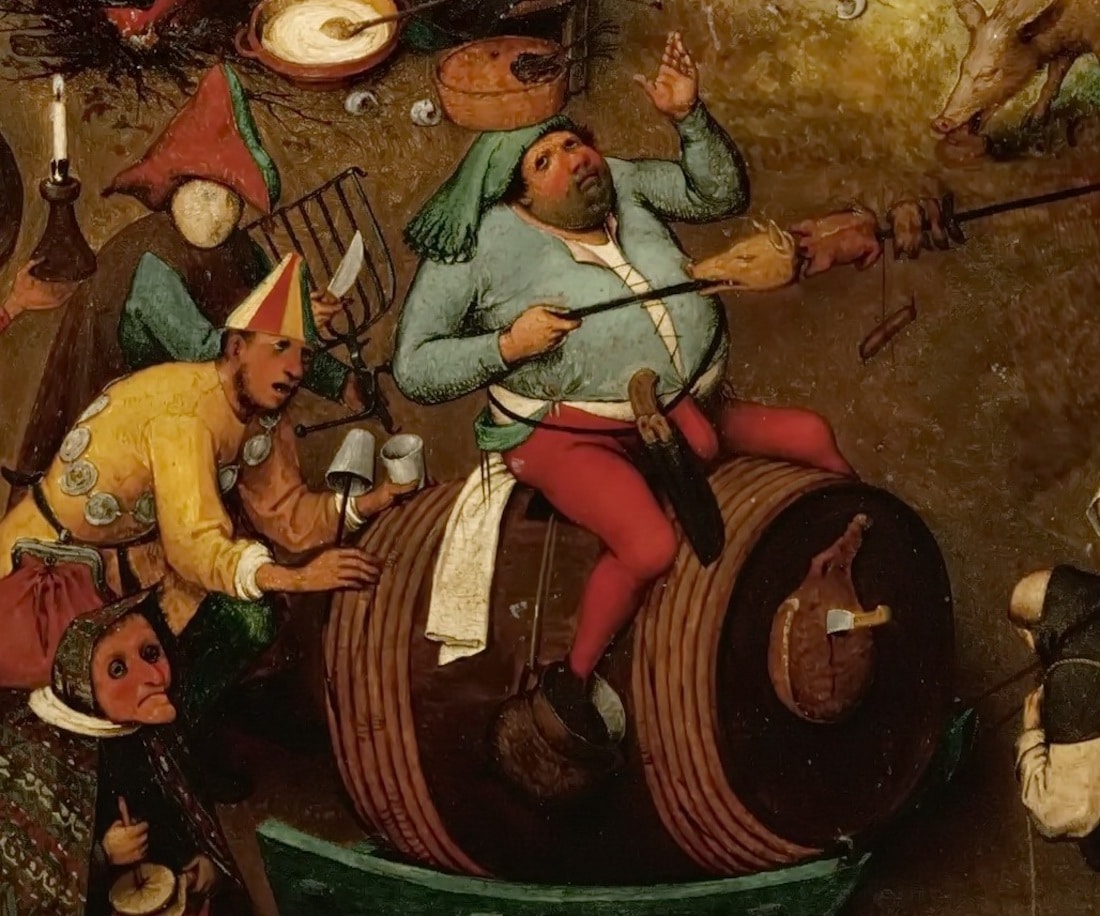 Bruegel opted to illustrate Carnival itself as a rotund butcher riding atop a beer barrel. Several props surrounding the man reference the Lenten tradition of abstaining from meat: an impaled pork chop adorns the front of his barrel; a savory pie balances on his head; and a pig's head is skewered on his spit. Behind him, a man dressed in yellow—a Christian symbol of deceit—follows suit. 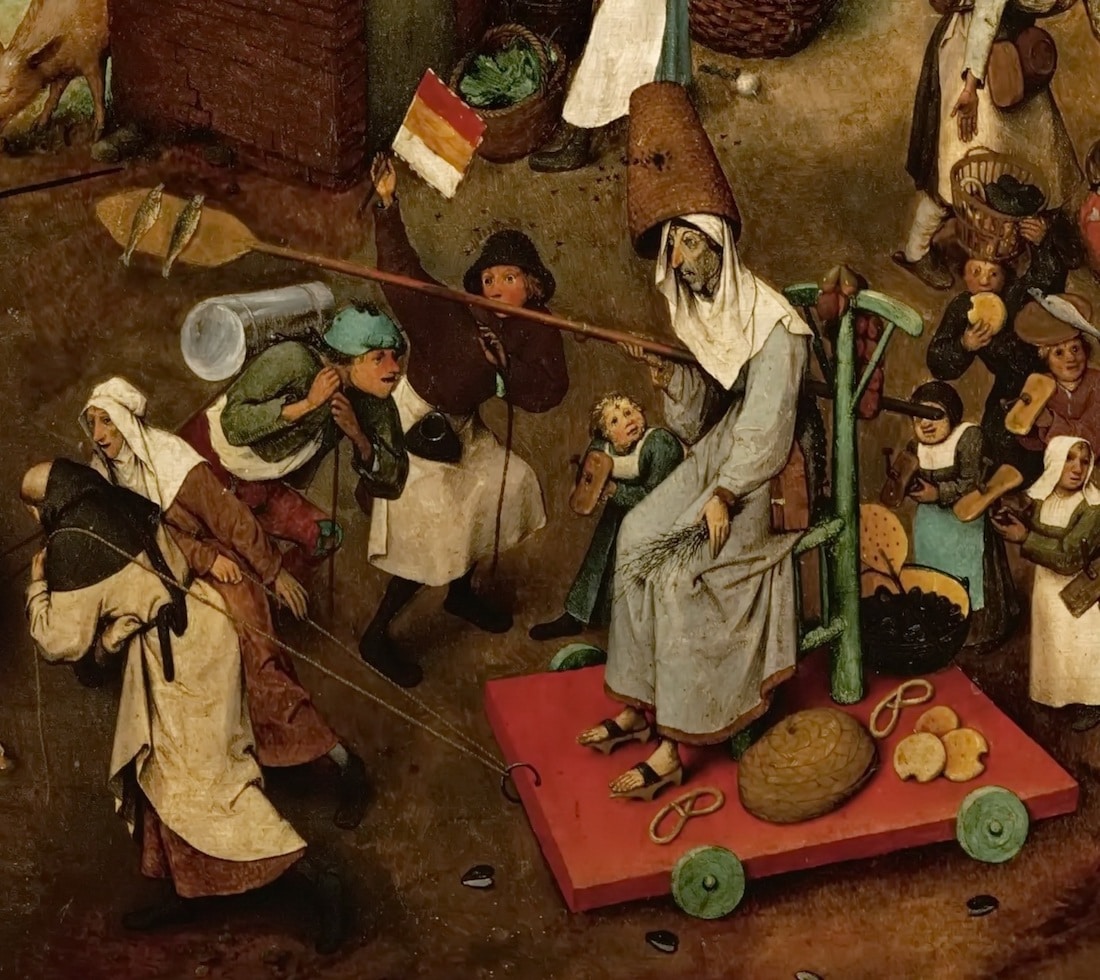 Bruegel imagined Lent as a gaunt, mournful woman. Sickly and seemingly starved, she sits on a cart that carries foods associated with Lent in the Southern Netherlands: mussels, waffles, and pretzels. A monk and a nun laboriously pull her cart, and obedient children follow its path. Contrasting Carnival's meat-covered spear and pie headdress, she listlessly carries a baker's paddle that holds two small fish and wears a beehive—a symbol of the church—on her head. 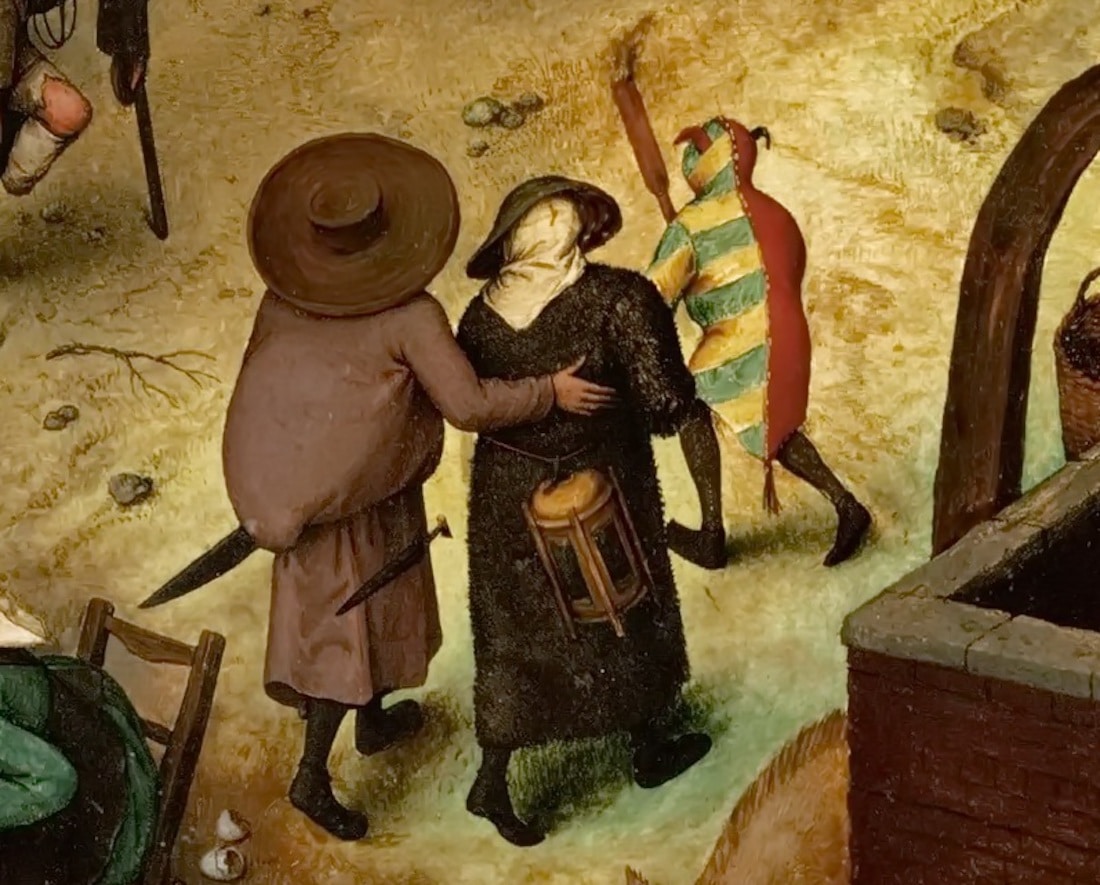 Toward the center of the composition, a couple walks behind a curious figure dressed like a jester. They appear to be walking toward the inn, with the fool lighting the way using a lit torch. The man's large back indicates that he is meant to symbolize egotism—a concept that has historically been illustrated by a hunchback—while the woman's unlit and unused lantern strung around her belt contrasts the jester's illuminated torch.

Many historians believe that Bruegel included the pair as a representation of everyday people, led toward the temptations of Carnival by foolishness. This analysis falls in line with Bruegel's well-known interest in depicting ordinary subjects and, consequently, exploring deeper concepts, like the flaws and follies of human nature. ”
While these works demonstrate the artist’s attentive eye for detail and attest to his direct observation of village settings, they are far from simple re-creations of everyday life,” the Metropolitan Museum of Art explains. “The powerful compositions, brilliantly organized and controlled, reflect a sophisticated artistic design.”

Much more than a simple genre painting, The Fight Between Carnival and Lent perfectly illustrates how Bruegel helped pioneer the art of anecdotal detail.

Crazy about symbolism? Share
Like My Modern Met on Facebook
Get Our Weekly Newsletter
Become a
My Modern Met Member
As a member, you'll join us in our effort to support the arts.
Become a Member
Explore member benefits