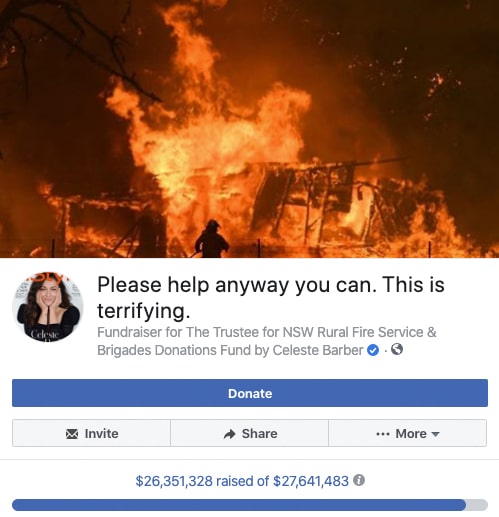 Australia is burning like never before. Every year, the states in the country deal with bushfires, but this season has shown widespread devastation that has brought unforeseeable tragedy to both people and the environment. So far, millions of acres of land in New South Wales (NSW) have been torched. Homes have been engulfed in flames and more than 20 people have died, and the University of Sydney estimates that nearly half a billion animals have been killed by the blazes.

Australian comedian Celeste Barber, known for her brilliant celebrity parodies, is doing something to help. She understands the fires’ havoc first hand—her family was evacuated from the town of Eden in NSW, and she shared eerie footage from her mother-in-law’s home.

In response to the fires, she created a Facebook fundraiser whose proceeds will go to the NSW Rural Fire Service (a government-funded service that is staffed by volunteers) and the Brigades Donations Fund, which disperses funds to brigades. “Please help any way you can. This is terrifying,” she wrote. Her efforts have proved beyond successful. In just 48 hours, the viral campaign raised $20 million, and it is well on its way to raising $30 million.

More celebrities have donated to help the country curb the devastation. Singer P!nk, who has a huge following in Australia, donated $500,000 to firefighters, and Australian actor Nicole Kidman and her husband Keith Urban pledged $500,000 AUD to the cause as well. And backstage at last night's Golden Globes, actress, writer, creator (and Golden Globe winner) Phoebe Waller-Bridge announced she'd be auctioning off her suit to aid Australian bushfire relief. In addition, singer Lizzo and comedian Nick Kroll (both currently on tour in Australia) urged fans to donate to the Rural Fire Service as well as Margot Robbie, Hugh Jackman, Selena Gomez, and Hillary Duff.

If you would like to support Barber’s efforts, you can donate and share on Facebook. You can donate directly to the NSW Rural Fire Service here.

Australia is experiencing widespread devastation in the wake of the bushfires. Homes have been engulfed in flames and there are estimates that nearly half a billion animals have perished.

In response to the fires, Barber created a Facebook fundraiser whose proceeds will go to the NSW Rural Fire Service, a government-funded service that is staffed by volunteers, as well as the Brigades Donations Fund which disperses funds to brigades.

Please help where you can. This is terrifying. https://t.co/HHemX5P3KM pic.twitter.com/QYrrEZfHFK

Barber isn't the only celebrity pledging money or their support for first responders.

I am totally devastated watching what is happening in Australia right now with the horrific bushfires. I am pledging a donation of $500,000 directly to the local fire services that are battling so hard on the frontlines. My heart goes out to our friends and family in Oz ❤️ pic.twitter.com/kyjDbhoXpp

The extraordinary generosity of Australians during this devastating bushfire crisis continues. Nicole Kidman has just told me that she and Keith Urban are donating $500,000 to volunteer firefighters around the country. @10NewsFirst @KeithUrban #NicoleKidman pic.twitter.com/HtEWFX14w3

As a family, we’ve donated $500,000 towards the immediate firefighting efforts and the ongoing support which will be required.
Big or small, from near or far, any support will help those affected by the devastating bushfires.
With love,
The Minogue Family.

#FightFireWithaFiver… @joeledgerton1 and I are raising money for Rural Fire service (@NSWRFS) here in Australia to help combat the terrible fires raging through county. Donate and spread the word!! #FightFireWithaFiver https://t.co/o6MYNObOoH pic.twitter.com/1BgsE0WRJw

My heart is broken after hearing about the wildfires in Australia. Sending all my love and prayers 🙏❤️ If you can please donate to @RedCrossAU, its time to help! pic.twitter.com/TPFg8s9bia

Absolutely devastated by the fires in Australia. Praying for everyone affected and all of the first responders. I’m making a donation and would love if you would consider doing the same if you can. Swipe up ❤️ https://t.co/aEqW5SPKPG

How can you help? Tap on the image for just a few of the organizations who are working tirelessly to fight the bushfires … to save lives, wildlife and property. #australianbushfires

So… delivered 19 cheques to RFS Captain John Lardner, a total of $105k because I cant count apparently, haha all good @NSWRFS