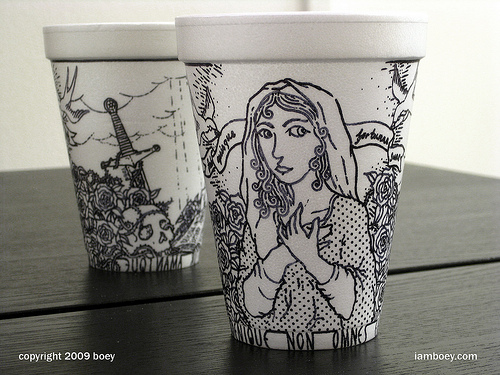 Cheeming Boey is a Malaysian artist who's medium of choice is a polystyrene foam cup. His first piece of cup art can be traced back to an Irvine trash can in 2006. He had just moved here from Malaysia. He found himself at a little coffee shop, sat down to watch people and doodle. But Boey had no paper. So he grabbed a trashed cup and began drawing. Suddenly, a light bulb went off in his head. “I knew I was onto something,” says Boey, 31, of Newport Beach. “It was beautiful.” Take a close look at them and you'll see little stories in these cups. There's even stories of Boey's own life. Like the one where he's crossing the ocean on a leatherback turtle. “That's my own journey West,” he says. “The boat sinking behind me is the art movement in the East with my friends who are artists back in Asia. They won't have the same kind of life I have here as an artist.” Currently his foam cup creations sell for $120 to $220. More at Flickr