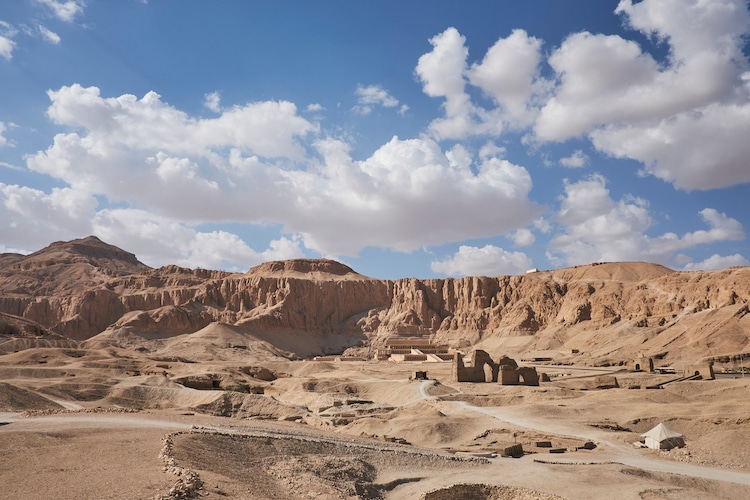 View of the Asasif Valley (Photo: Stock Photos from Maciek67/Shutterstock)

Egypt continues to dig up striking ancient artifacts, as demonstrated by the incredible discovery of thirty pristine wood coffins dating back 3,000 years. Once opened, archaeologists found that the beautifully decorated coffins contained perfectly intact mummies. The coffins were discovered in Luxor at El-Assasif cemetery. This necropolis on the west bank of the Nile River was once part of Thebes—the royal capital of Ancient Egypt.

The Ministry of Antiquities is calling it one of the biggest and most important discoveries of the past few years. Stacked neatly in two rows, the sarcophagi retained their carved portraits and colorful paint. To put things into perspective, according to Egyptian Antiquities Minister Khaled El-Enany, it's the “first large human coffin cache ever discovered since the end of the 19th century.”

The coffins were made for priests and priestesses, as well as children. Excavation team leader Mostafa Waziri estimates that they date back to the 10th century BCE under the rule of the 22nd Pharaonic dynasty. These precious artifacts will now undergo restoration before being moved to the Grand Egyptian Museum. This new museum is set to open next year near the pyramids at Giza.

By unearthing these incredible coffins, the Egyptian government is continuing to make important archeological discoveries that deepen our understanding of ancient Egypt. Just prior to the coffins, archeologists found a series of workshops in Luxor's Valley of Monkeys. This ancient industrial area was used to make furniture and pottery for ancient tombs. Along with the workshops, a large kiln for firing ceramics and decorative items were also found.

These types of artifacts help expand what we already know about the ancient Egyptians and their culture around life and death. “This is unprecedented,” said excavation leader Zahi Hawass. “Up until now, everything we knew about the (Luxor region) came from the tombs themselves, but this new discovery will allow us to shed a light on the tools and techniques used to produce the royal coffins and the furniture placed in the tombs.”

With further excavations underway in the Valley of the Kings, it's just a matter of time before we hear more groundbreaking news out of Egypt.

Thirty coffins with well-preserved mummies dating back 3,000 years were recently discovered in Egypt.